Typewriters, the Australian Utopia, and Men of Vision and God 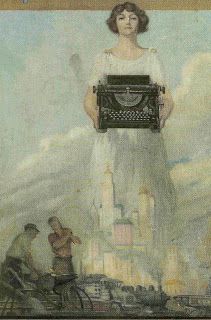 The first typewriters to arrive in were four Sholes and Gliddens shipped into on February 18, 1876, by George Witherage Cotton. The four cases arrived on the 5500-ton Inman Line steamship the City of , which left on November 16, 1875. Cotton was to use the typewriters to write pamphlets which advanced his Utopian vision of putting working men on to land holdings and providing all citizens with a comfortable life. 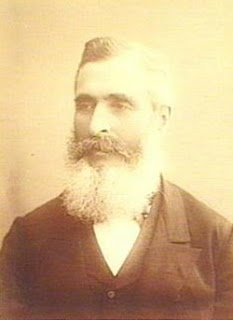 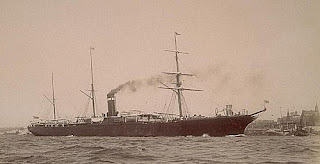 Cotton (above), a land agent and politician, was born on  February 4, 1821, at , , . He was taught by a Congregationalist minister and the local rector and later spent two years at , . He worked in a business house until he migrated with his parents to in 1848.
Cotton became a leading layman in the . He bought the land for and was secretary of the school in its first 20 years. He became a Legislative Council member in 1882. During a depression, his scheme to put low-paid men on to viable land was the only way he could see to avoid the revolution and chaos which he expected to result from the conflict of capital and labour. The Homestead League was formed, with Cotton as secretary. In 1896, 12,900 people, or almost 4 per cent of the population, lived on the type of holdings Cotton had envisaged. Cotton’s philosophy became settled policy, realised throughout the nation in the Australian suburb and its quarter-acre blocks.
In the 1880s he declared a new faith: “I worship a living Christ in the person of every child, however it may have been born into the world.” He died in on 15 December 1892.


Cotton lived in an age of not only great inventions, but when the hands of clergyman were sometimes idle for days on end. Men of the cloth were thus able to mix their vocation with a bit of dabbling in inventing on the side. 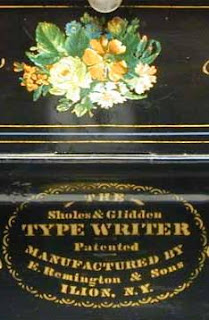 When the Sholes and Glidden (above) was first developed, Christopher Latham Sholes had it in his mind that among the eight or so groups of men who might use his invention (and I do mean men, for he had not conceived of women typists) would be churchmen wanting to write and distribute sermons. Sholes himself was a devout Anglican-Episcopalian.
If some of those who had preceded Sholes in trying to get a typewriter into production had been thinking along the same lines, it may well explain why so many clergymen were involved in that long and arduous path from the first patent being awarded in the last days of Queen Anne’s reign in 1714 to the manufacture of the Sholes and Glidden 160 years later.
Indeed, it is now accepted by most typewriter historians that the first working machine ever made was put together by one Reverend William Creed of as far back as 1747. 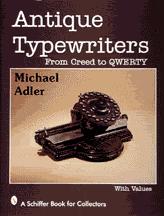 Yet Creed was almost overlooked when Michael Adler, an Australian-born journalist, wrote the first version of his definitive history, The Writing Machine: A History of the Typewriter  in 1973. Adler took the word and misspelling of an earlier, less accurate historian when he practically dismissed “Cred” as a man who “was supposed to have invented the Melograph, of which we know only that it was an apparatus to be attached to a harpsichord or clavichord whereby every note played was committed to paper”.
Happily, Adler didn’t leave his research there. Having studied music at the Sydney Conservatorium and English and history at , he was sufficiently intrigued by “Cred” and other aspects of the early development of the typewriter to continue digging. Duly, in 1997, exactly 250 years after Creed produced his machine, Adler was finally able to find a publisher for an updated version of his book. And such was the impact of William Creed on the revised story, Adler added his name to the new title. It became Antique Typewriters: From Creed to QWERTY.
Adler went to great lengths to explain the change, saying Creed deserved credit for building history’s first writing machine. Adler quoted from a letter written by one John Freke and published in the Philosophical Transactions of the Royal Society, , so that Creed’s invention should not be “lost to Mankind”. Freke called the clergyman “a man well acquainted with all kinds of mathematical Knowledge” and “a Gentleman of very distinguished Merit and Worth”.
Before Sholes’s machine went into production, others had gone very close to building something we might today recognise as a typewriter. Two, in particular, were men of the cloth. In 1855, a French abbot, Abbé Clément, was able to type out the names of his students. Sadly, the Abbé’s machine was promptly destroyed by a provincial politician called Count d’Aunay because, with it, “anyone, without even the help of a printer, could produce and distribute pamphlets not only against morality but against the Régime itself!” 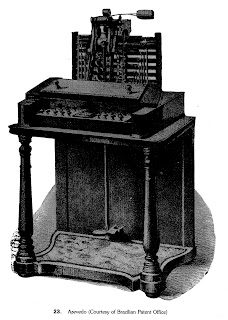 In 1861 a Brazilian priest, Padre Francisco João de Alezedo, built a wooden stenographic typewriter (above). It won awards at exhibitions in and , after which it was selected to represent in an international exhibition in in 1862. But it never made the trip and was not heard of again.
Adler’s histories fully acknowledge the work in the mid-1860s of the Danish pastor Hans Johan Rasmus Malling Hansen. However, in the past 14 years, since the publication of Adler’s second book, the case for Malling Hansen has grown, to a point at which some historians are willing to place him before Sholes as the inventor of the world’s first manufactured typewriter. But Malling Hansen’s typewriter looks nothing like the machines we call typewriters today. The pastor called it a “skrivekugle”, or writing ball, and that is exactly what it appears to be. How widely practical it might have become is anyone’s guess, but four years after it went into limited manufacture, it was overtaken by Sholes’s machine.  Standing seriously against Hansen’s machine was its weight (75kg) and initial cost (£100).
Clergymen certainly did not give up efforts to produce successful typewriters in the years following Hansen’s invention. One of the most famous office machines to go into mass production in the latter part of the 19th century was the Oliver, the work of Canadian-born Methodist minister Thomas Oliver. The Reverend Oliver’s motivation was to build (initially from strips off tin cans) a legible means of writing and distributing his sermons in . The Oliver company’s impressive headquarters is on the US National Register of Historic Places and can still be seen in , even though the company has long since gone. Another typewriter company was one started by a Presbyterian minister, C. S Nickerson, in 1907. That same year the Reverend H. J. Otto, of , designed a pneumatically operated typewriter. 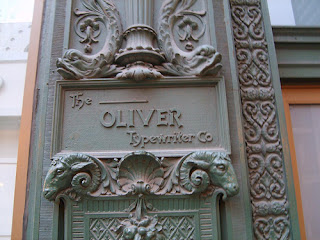 Posted by Robert Messenger at 12:31