Typewriting Schools: Who Was Willy Scheidegger? (And What Was He Good For?)

Some years ago I came across an unusual typewriter at a place called Revolve in Canberra. Revolve is basically a rubbish dump recycling centre. At the time I thought I knew most European typewriter brand and model names, but this one threw me: It was an Adler, yet it was called a Scheidegger. What was even more intriguing was that underneath the typewriter in its case I found a large number of coloured plastic caps. Having a Remington Bantam (see below) in my collection, and also having several Imperial colour-coded touch-typing cards, I could see that the caps were for keytops, to teach colour-coded touch typing. 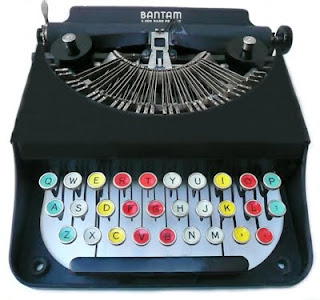 When I got the machine home and re-attached the caps to the keytops, I found I was missing about four red caps. So I went back to Revolve, got down on my hands and knees in the open area where I’d found the Scheidegger, and dug around with my fingers until I’d found all the missing caps. They had fallen out of the typewriter case on to the ground and had been trampled into the dirt. 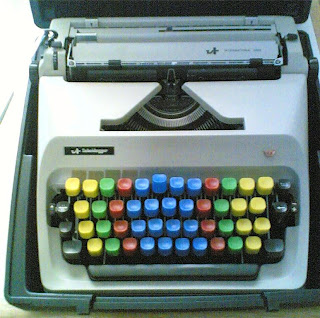 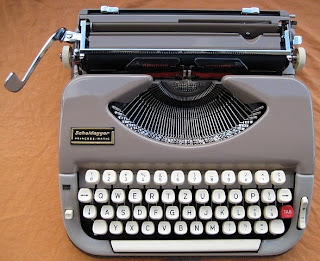 With my Princess-Matic, I received a great deal of literature relating to the Willy Scheidegger Swiss Typing School at 5-6 Argyll Street in London. This naturally heightened my interest in the man. The literature, dated 1964-1971, had belonged to a Pat Crouzieres (later Mrs Redfern?) of Camberwell, and included a diploma, student report cards, guarantee, receipts, typewriter manual, course instruction book and a code-coded chart. 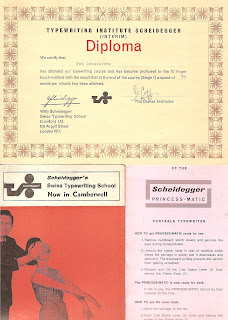 When one Googles Willy Scheidegger, it becomes immediately apparent that there are a few good stories behind the man. But quite what? For one thing, Mr Scheidegger was the defending party in a landmark British court case, appearing against the Minister of Social Security. The outcome of this case, apparently, established that a worker who is not an employee for one purpose may be treated as such for another. “It was held that a worker may be an employee for the purposes of vicarious liability for torts, but not for the purposes of national insurance.” Wikipedia tells us that a tort is, “in common law jurisdictions, a wrong that involves a breach of a civil duty owed to someone else. It is differentiated from a crime, which involves a breach of a duty owed to society in general. Though many acts are both torts and crimes, prosecutions for crime are mostly the responsibility of the state, private prosecutions being rarely used; whereas any party who has been injured may bring a lawsuit for tort.” 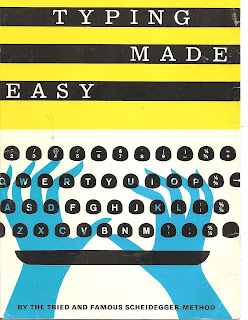 Not just torts, it seems, but also rorts. Mr Scheidegger’s name is mentioned in Hansard records of questions asked in the British House of Commons. These, from what I can gather, relate to Mr Scheidegger’s questionable policy of forcing people who joined his typing schools to buy one of his Scheidegger typewriters. The questions were asked as to whether a law was being broken under the terms of the Trade Practices Act.
The Dutch Wikipedia has an entry for Willy Scheidegger’s business school. It says it was named in 1947 in Switzerland and began with courses teaching typewriting in a classroom context. “Scheidegger Holding has operations in 12 European countries … Scheidegger Opleidingen Nederland B.V. was established on March 1, 1962 … The offering consists primarily of secretarial, financial and management training. Headquartered … at Marathon 9H to Hilversum” 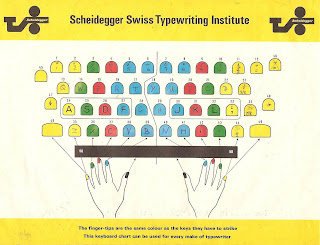 I managed to contact Judith Rijpstra, in charge of marketing and communications at the Dutch institute. But she was unable to throw any light on Mr Scheidegger's life. She suggested I get in touch with the Swiss Central Business Registration in Zurich to get more information. "Until 1988, the headquarters of Scheidegger was in Zurich. Judith also pointed out that in May last year (2010) NCOI Opleidingsgroep ("a Dutch education company for working people") had taken over Scheidegger "and expanded the business to more than 100 different educations".
Anyone out there able to help me with some more information about Willy Scheidegger?
Posted by Robert Messenger at 12:56

I have just got my hands on a Scheidegger also, the same adler I believe. The 'International 2000' model. I unfortunately have nothing to add to your great research but will follow this with great interest.

A long time ago in the mid 1970's Scheidegger, London, W1 was sending out Salesmen to find people who wanted to learn to touch type. You signed up for the course which would teach you how to touch type without looking at the keys, which were covered by an assortment of coloured caps. You paid your fee £60, and included was an Adler typewritter. You attended weekly classes ususal held in your local community hall, where you were taught touch-typing. You paid your money and then it was up to you if you completed the course. If you did complete the course, you got a Certificate in touch-typing. Hope this throws some light on the subject.

Thank you Margaret, most helpful.

When my daughter was 14, homeschooled, and the year was 1977, I sent her to the Scheidegger school in Copenhagen to learn touch typing (one semester) and then bookkeeping (one semester). Afterwards she got the diplomas and the typewriter, which I still have. Kind regards Jan Rohde, Denmark

I was employed at Scheideggers Typing School office in Leicester for a while. I had signed up for a course and the salesman told me they were looking for some office staff.

I answered student's queries and other general admin work. I remember that they employed overseas cricketers as salesmen part time while they were in England for the summer season.

I remember attending the Scheidegger touch typing course in the 70,s at a local school hall. Brilliant course and even today I can touch type over 100 words per minute. Kids are fascinated especially as it Dad who is doing the typing.

I have just found my 4 booklets for the Typing Made Easy course, they are of course, Used. I passed with excellent results. Would these books be of use to anyone - I was going to try to put them up for sale for a small fee - any ideas? I did the Course in Port Talbot, West Glamorgan in about 1966 or just before. At the time it was a costly fee for my parents, but it was well worth it. I thoroughly enjoyed the course, love every minute of it.

I have today found my four booklets which I used for the typing course in around 1965/66. I passed with excellent results - I found the course excellent, I enjoyed every minute even-though it was costly for my parents, they were so pleased I did well though. I had thought of putting them up on Ebay for a small fee - any takers??? Seriously This was a terrific course. How time passes!!!

I have the 4 "typing made easy" booklets published by Willy Scheidegger. I also have 2 of the matching keyboard charts.They all came with the princess-matic typewriter when I recently purchased it secondhand.

I attended Scheidegger Typing School in the 1960s. It was traumatic for a 15 year old as we weren't allowed to speak or stop typing. The clatter of the keys and the ping of 30 or so bells is fixed in my memory. The teacher sat on a podium so she could see us all. We learnt to type very fast without looking at the keys and were timed, mistakes were frowned upon. It was very strict but I went on to work for top surgeons in London and the South. I don't remember having to buy a typewriter!

I am really impressed with your blog article, such great & useful knowledge you mentioned here.Your post is very informative. I have read all your posts and all are very informative. Thanks for sharing and keep it up like this.
French School in Dubai

My parents paid for me to learn this touch typing method, I did very well for a 14 year old, got my certificate, it was in our local church hall in Hackney East London.

I bought a scheidegger 3rd edition text book for the touch typing on ebay. I don't know much a out the man or what happened to him but looking through the book it's looks good I learned touch typing at college in 1990's via RSA (now OCR) Qualification

Hi. I am a Norwegian, and in 1975 when I was 20 years old, I was a teacher at the Scheidegger type writing courses. I did this for about 5 years, and teached many hundred people how to type write . Long time ago, now I am 64 ��. Rgds Henry Nilsen,

I did this course when it arrived on the Wirral Merseyside. You've brought many happy memories back to me. And I passed.

Hi. I am Italian but have lived in the UK since 1983. I did two courses with Scheidegger in Como in or about 1980 for both shorthand and typing with an Adler typewriter. I thoroughly enjoyed the courses and got a distinction on both courses. I was very young in my teens.

I have the manuals I learned and remember the distinctive keyboards with coloured caps. For its time, it was the greatest idea to aid learning to type

I retain very fond memories of those years long gone and whatever Mr Willy Scheideggers past, I believe he deserves all the credit for his ideas

Unfortunately, I did not purchase the typewriter and I very much regret not doing so. glad to see many other people enjoyed the course and had a positive exprience

Hi. I used to teach on Scheidegger typewriting courses in Retford and Gainsborough in 1982.

With regards to your research I was wondering if you have checked out Verena Scheidegger (born Muller) 1933 -2017 Verena married Willy Oskar Scheidegger in 1954. Willy was born on 22 March 1933 in Schweiz (Switzerland). They had 5 children, if it is the Willy Scheidegger under discussion.

I have come across this chat because I was trying to find the value of the Scheidegger shorthand case and its contents. It has been quiet interesting reading through the experiences of others.

I also attended touch typing classes in a church hall in Hackney, East London. I know I had to use the Scheidegger typewriter for the course as the coloured caps covered the keys and was essential to the training.

In 1981, after the typing course my mother enrolled me for the Scheidegger Shorthand Course, the sales representative who came to our home, said there were no classes to attend. After paying £99 (£341 - today’s value) I was supplied with a briefcase which contained:

I was left to complete the course as you posted your efforts to:
108 Vaughan Way, Leicester LE1 7ZU