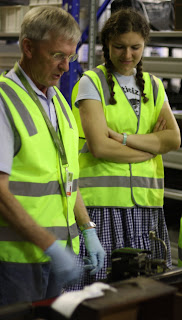 David Thompson (seen above with Sticky Institute typewriter enthusiast Candace Petrik) is an outwardly charming man who works as a volunteer curator at Museum ’s Scienceworks building at Spotswood in . For his sins, and I feel sure he has few, he has been put in charge of the museum’s rather impressive typewriter collection. The range of machines covers about a century, from a Sholes and Glidden of the mid-1870s to a naturally sizeable Chinese character typewriter, a hefty IBM Executive and a bright red Olivetti Valentine (on which the museum was foolhardy enough to spend good money).
By his own admission, Thompson doesn’t know a lot about typewriters, or their history, which puts him on pretty much the same level as the curators in charge of the typewriters at the in . But in Thompson’s case, he has at least made the effort to find out what he can about the machines that Scienceworks holds, and to work out how they work. 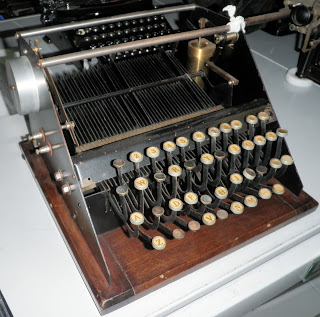 This includes a uniquely Australian invention (above), a morse typewriter built by Alfred Traeger to compliment his pedal-powered radio. Traeger was the man who was instrumental in the establishment and early success of the Royal Flying Doctor Service. He had been contacted by John Flynn, who founded the service, to assist in experiments to enable remote families access to medical treatment. A morse code wireless set was one thing, but most outback Australians couldn’t transmit morse, so Traeger came up with the typewriter to enable unskilled operators to type their message in plain language. How it works, exactly, is way beyond my Luddite mind, but Thompson knows precisely what makes it tick. 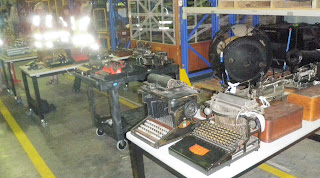 During last month’s “I Am Typewriter: The Triumph of Continued Usefulness” festival, organised by the Sticky Institute, a small group of us was given a tour of the Scienceworks collection (above). In Victoria's heavy flooding in January, crickets had been washed into the building, but their chirping couldn't distract us from such delicious fare. And Thompson was able to adeptly demonstration how the Mignon, Edelmann, Columbia, Hall and Frolio index typewriters worked, along with the Lambert (“a cross between an index and a keyboard typewriter"), the Williams with its “grasshopper” action, and the Hammond, with its little back hammer.
Thompson had been to see the Oscar-winning movie The King’s Speech, and was able to tell us that the museum’s olive green Oliver was the same machine that was used in the film by Geoffrey Rush, playing the Australian speech therapist Lionel Logue.  Thompson tended to agree with me, however, that this was an unlikely prop. It was an American machine and, though sold in both and , was well out of fashion by the period in which The King’s Speech was set.  As good a typewriter as the Oliver was, its heavy base and high rabbit ears had long been by-passed in style by models we’d more readily recognise as typewriters today - notably the Underwood. What’s more, King George VI, of course, endorsed Imperial typewriters.
A few years ago an American film critic commented, “Generally, the act of writing isn't very cinematic. But looking at most films about writers, there is a common element: typewriters. Even in the age of word processing, modern characters prefer the good old-fashioned clickety-click of the venerable contraption.” This may well explain the choice of an Oliver for The King’s Speech, because it clicks like no other clacker. 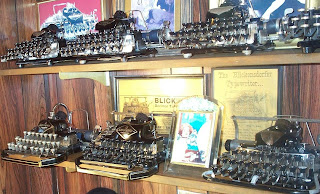 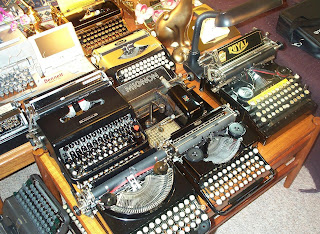 I was reminded of that on Tuesday evening when, almost totally unprepared for it, I saw my own face suddenly appear on the television screen, looking down between the ears of an Oliver and single-fingeredly tapping out the word “Collectors”. ABC TV is, I learned, rescreening highlights from long-past episodes of the show The Collectors. It was a joy to see how my own museum once looked - but (hopefully) will soon look again.
Posted by Robert Messenger at 11:14

Another wonderful entry! The Traeger machine is fascinating -- a cousin of the Yetman, at least in conception.

Do keep in mind that Olivers were popular in the UK well after their demise in the US. The strange old design was produced in England well into WWII, and the British Oliver Co. survived until the late '50s.

That Traeger is awesome! and that it led to my learning of the Yetman is a bonus. How cool is that?
great blog I'm really enjoying it.