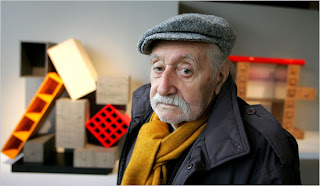 It almost seemed as if Ettore Sottsass was trying to hang on into 2008, in the hope of perhaps stealing some thunder from Olivetti’s centenary year. Sottsass died, in on New Year’s Eve 2007, still believing he had a score to settle with the Ivrea-headquartered company.
Sottsass’s had long been a lone voice as the giant corporation continued to perpetuate the myth that Sottsass was responsible for its iconic if largely useless 1969 typewriter, the bright red Valentine. As it turned out, obituaries published around the world compounded the misconception. Clearly it suited – and goes on suiting – Olivetti to let people believe in the false connection. 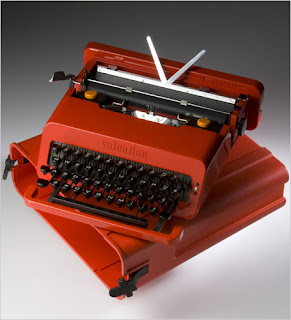 Sottsass, if anyone was prepared to listen, had been only too forthcoming in disowning the Valentine. He intensely disliked the machine – it was, he said, "too obvious, a bit like a girl wearing a very short skirt and too much make-up" - and he hated being remembered for it above his many other great designs, which included truly remarkable typewriters such as the electric Praxis 48 (Alan Seaver is the lucky man who owns this one). 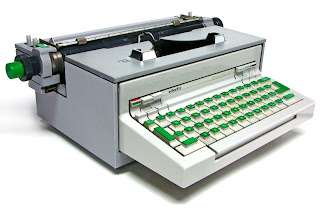 One of Sottsass’s last English language interviews appeared in the Los Angeles Weekly arts section on March 29, 2006, on the occasion of the LA County Museum of Art Sottsass survey. In Greg Goldin’s article, "In the Realm of the Senses", Sottsass said, “I worked 60 years of my life, and it seems the only thing I did is this ****ing red machine. And it came out a mistake. It was supposed to be a very inexpensive portable, to sell in the market, like pens. It didn’t have capital letters, it didn’t have a bell. I wanted the case to be inexpensive. Then the people at Olivetti said you cannot sell this kind of cheap Chinese thing. So, everything was put back: the capital letters, the bell, even the expensive plastic, which I was thinking would be this horrible, cheap plastic. So, it was a mistake.”
Sottsass, an Olivetti consultant, had come up with an “anti-machine machine” concept, for a typewriter equivalent of the Bic biro - a disposable typewriter. It wasn’t an entirely new idea. Royal had produced its Signet at the height of The Depression, in 1932, and between that same year and 1940, Remington followed with similar “cut-back” models, aimed at a largely adolescent market, such as the Remie-Scout/Monarch Pioneer (Richard Polt's seen here), Bantam and Cadet. 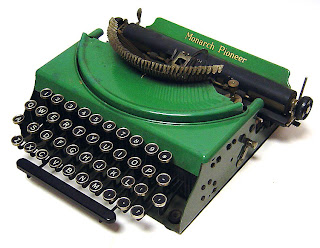 It’s mindboggling that today, websites such as Wikipedia quote Sottsass as describing the Valentine as being the “biro” among typewriters – inferring he thought it had vivacity. What he actually said was “biro”, not “brio”. Just shows how things can get really get twisted in people’s minds.

When Olivetti disagreed with the “Bic biro” idea, Sottsass walked from the project. Under the supervision of the Canadian Albert Leclerc, it was completed by an English designer, Perry A. King (above), made in and launched on to the market on St Valentine’s Day 1969. Olivetti ensured Sottsass’s name was attached, to enhance the machine’s desirability, but the company was careful with its choice of wording, preferring “devised”, for example, to “designed”. Technically, Olivetti was at least partially right, because the “innards” of the Valentine belonged to the earlier, unspectacular Dora (below, from Will Davis's websites), which Sottsass had designed. 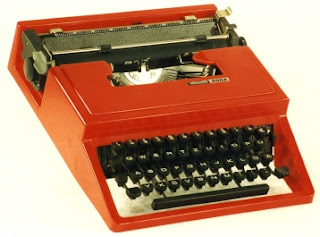 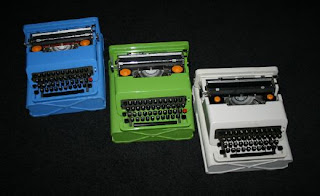 The Valentine’s attraction has grown over time. Today, people looking on eBay for a manual portable typewriter as a home or office decoration – rather than writing machine - are prepared to pay up to $400 for one in red (lime green rarities fetch as much as $3000 – the blue and off-white models are also very uncommon, All three are seen above.). The Valentine is prefect as a representation of late 60s pop art in practical machine form.  But the Valentine is not a practical typewriter. On the occasion of the machine’s 20th anniversary, in 1989, Olivetti presented one to the at Ultimo in . It remains there, in the Powerhouse’s vaults, while the Praxis 48 is upstairs on display. The Valentine is still in its original packing case, but the Powerhouse took it out long enough to test it and declare, on its website, its “mediocre” performance. It may seem an ungrateful assessment, but it’s all too fair.
One of the primary reasons for the Valentine’s poor “typeability” is that heavy, rigid was attached to light, flexible Dora framework. The original Dora casing weighs much less. The standard Lettera 32, from which the Dora and thus the Valentine were mechanically developed, has an aluminium casing. Unlike the Remi-Scout, the Valentine’s light, fancy front lip fails to give it any real balance. ABS, or acrylonitrile butadiene styrene, is a thermoplastic used to make products such as piping, music recorders, golf club heads, car body parts, protective head gear and LEGO bricks. What’s more, rising oil prices at the time of the Valentine’s launch pushed up the cost of plastic, and therefore the Valentine, way beyond the realms of what Sottsass (or Olivetti) would have considered “disposable”.
Sottsass, founder of the Memphis School of Design, always maintained his involvement with commerce was purely for the sake of making things accessible to “the people”. The Valentine was Olivetti’s last great attempt to hold its market share against a growing flood of cheap but more practical Japanese imports, from Brother, Nakajima and Silver-Seiko. But it made its bid based on looks rather than price. Similarly, Smith-Corona-Marchant had Ghia, also of , design a copycat machine, the Super G (below), and later, more clumsily, Royal brought out its Saturn electric. It was all in vain.

Irony has been heaped upon the Sottsass-Valentine story. Olivetti’s judgement that “you cannot sell this kind of cheap Chinese thing” is invalidated now that Olivetti manual portable typewriters are made in in . But even the MS 25 Premier Plus, based on a Brother design but with extremely poor alignment, is not as cheap and nasty looking as the plastic Lettera 82 Olivetti made in its factory in in . This was based on a Hermes Baby design for which Olivetti had bought the rights. 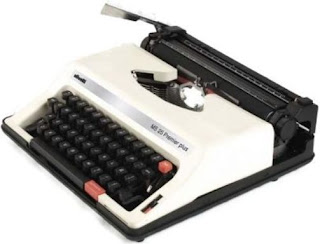 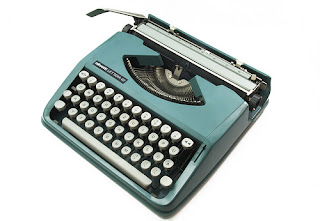 Olivetti is unjustifiably proud of the Valentine and would endorse the comment of Paul Robert of Amsterdam, who on his Virtual Typewriter Museum website says it is “the end of manual portable history and one post-1920s typewriter that deserves a place in this museum …” But Paul, a collector with impeccable taste, is no doubt referring to the Valentine’s distinctive styling rather than its standing among “typeability” typewriters.
The Valentine is on permanent display in the New York Museum of Modern Art. But so, too, is the greatest of all Olivetti portables, the Lettera 22, designed by Marcello Nizzoli (below), awarded the Compasso D'Oro in 1954 and in 1959 nominated by the Illinois Technology Institute as the best design of any product of the previous 100 years. The Lettera 32 was developed from it, but subsequently Olivetti lost the plot. 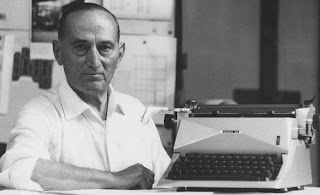 It was Nizzoli who taught Sottsass what he knew about typewriter design. But that was insufficient for Sottsass to find a place among the echelon of 20th century typewriter designers, up there with, say, Wellington Parker Kidder, Frank S.Rose, Lee Burridge, Richard Uhlig, John H.Barr, Giuseppe Preziosa, Henry Dreyfuss or Nizzoli.
Perhaps, however, the final irony for the Valentine came with Sottsass’s death. With him died the truth about its design. And thus its auction value will doubtless continue to rise.
Posted by Robert Messenger at 10:20

On eBay I just saw a Sears Adventure toy typewriter that imitates the Valentine!

Do you know, by any chance, of any other portable of the 60's or 70s that had the open air beneath the keys as the Lettera 31 and the Valentine and that slipped into a case with the handle attached to the rear of the typewriter itself, locking into the sheath-like case as the valentine does? I had such a machine, in a teal color but the design wasn't like the Valentine's. For instance the bar or rim was complete. Any help would be appreciated.