Yeah, it was a very beautiful image there, with the weeds coming up through the keys … Lee Ranaldo to William S. Burroughs, 1997
he National Geographic of January 2000 contained a 5500-word article by Cathy Newman titled “The Enigma of Beauty”. It may seem to some of us that 5500 words would not even start to scratch the surface of such a subject. Nonetheless National Geographic’s spread, as is that publication’s wont, opened full of promise, with two double-page colour photographs, taken by Jody Cobb. The first was of Miss Universe 1998, Wendy Marcelle Fitzwilliam of , giving her breathtakingly bejewelled and befeathered national costume “a tiny tweak”. “Lesser mortals reach farther - and more strenuously -­ in an age-old quest to embody a beauty ideal as enticing as it is elusive”, read the article’s go-first. The second picture was of a man called Wes Wheeler, his back covered in what is mostly a brightly covered tattoo. Right there, between the shoulder blades, is a typewriter. “Getting the tattoo was painful,” Wheeler was quoted as saying. “But sometimes I look in the mirror and say, ‘Wow, that's beautiful, and it's on me’.”
Wheeler’s tattoo, which took 70 hours to complete, was actually a tribute to Stephen King’s novels, and to the left above the Underwood is Jack Nicholson’s manic  “Here’s Johnny” face from the Stanley Kubrick movie of The Shining.  No doubt the big, black typewriter was just part of what Wheeler saw as a human skin canvas of overall beauty. But among the worldwide typewriter collecting fraternity, the appeal in these machines is not always about just their rarity, their historic significance, their engineering design and its part in the 140-year technical development of the typewriter, or indeed their functionality. Sometimes it’s just the sheer beauty of the thing.

Are typewriters, by and large, the most beautiful machines ever made? It’s a question typewriter collectors don’t appear to ask themselves, or others.  They be would right, of course, in assuming people who collect milkshake makers, food mixers and Scandinavian telephones find those objects more beautiful than typewriters. And it would also be fair to say that beyond those who collect are those who simply admire machines from as little distance as is possible: trains and boats and planes, for example, not to mention cars. I for one fancy I have an eye for a good-looking car, and rate the 1930 Mercedes-Benz Count Trossi SSK as unquestionably the most beautiful car ever built, with a Duesenberg J possibly second. I even have a soft spot for 1950s fin-tailed American gas guzzlers, but that just shows my age. In there used to be a joke about a surfer who, paddling his board back to shore, says, “That better be a ’59 Caddy, or I’m in big trouble.” It’s still my dream transport machine.

The whole point here, however, is that beauty is definitely in the eye of the beholder, as Shakespeare didn’t say. I know of people who collect typewriters as well as cars, one of whom can even see beauty in the humble VW Beetle.  There is probably nothing to be gained in trying to convince a metallic pink Cadillac DeVille Series 62 lover that a shiny red 3 is intrinsically more beautiful. Where typewriter collectors might find consensus is in accepting that sheer beauty, regardless of age, is as good a reason as any to collect their machines of choice. In the past, ETCetera has run pages of evaluations of typewriters, marking them from one to 10 for both rarity and desirability – desirability, that is, based on how much a collector should want one in his collection. Such a reckoning might apply, say, to a Blickensderfer 9, not all that rare but well worth having. Let’s say a combined score of eight or nine out of 20. But what about out-and-out beauty? Take a pale blue Olivetti ICO MP1: lowish score on rarity, middling score on desirability, high score on beauty (well, at least in my eyes). 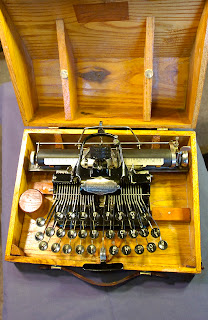 What got me wondering about whether the beauty of typewriters makes them more desirable, and in same cases even overrides their rarity, was the question – invariably asked of me when I reveal my passion – as to why I collect typewriters. Again, as with any typewriter collector, or as with any collectible, it’s a case of everyone for their own. I happen to be an incurable romantic, take that as a given. Always have been. I watch like a fix. The ending of It’s a Wonderful Life will reduce me to a blubbering mess, even when I can recite it word for word.  And so, as a romantic, I like to think I can see the beauty in things before all else. As I write this, sitting in a study surrounded by typewriters and typewriter ephemera, it feels as if I am lying in a bed of roses. And I can lie in this bed of roses any day of any week, without my indulgence in the least bit pricking my conscience. 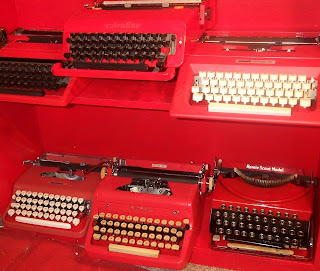 What these typewriters are reflects my circumstances, but also my choice, my taste in what I find attractive. Living in Australia, and collecting on a very tight budget, means I will almost certainly never own a Crandell or an Odell.  An ornate Sholes and Glidden is just a highly fanciful dream. But I will forever have close by me a Noiseless portable, a Sun, an orchid Remington, a bright red Corona 3 Special, a Bijou three-bank, a Stoewer Elite, a Blick, a Bennett, a Standard Folding or three, a Mignon, a New Yost – even something as toothy, and perhaps to some quite beastly-looking, Smith Premier No 10. 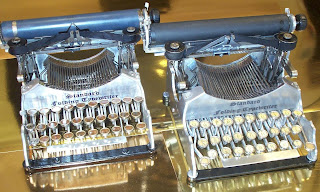 For me, these machines don’t have to be rare or ancient, or all that desirable in any other terms. I once received a large consignment of typewriters after the widow of a Chicago collector auctioned off a vast array of her late husband’s machines. I was buying so many, in the end I wasn’t sure what I was getting. As I worked my way through the container, I opened a case and was literally blown away by what was inside. It was nothing more special than a shiny black 1938 Underwood Champion. But it looked as if it had never been taken from its case, let alone ever used. Or touched, for that matter. I imaged the collector buying it way back then, putting it in his collection brand new, and just leaving it there, locked away from the world, until with great age it might appreciate in value. Now it’s no longer a matter of value, it’s mine to savour: it’s a gorgeous typewriter and I will never part with it, come love, taxes, hell or high water.

I’m happy to say that since then I’ve had that experience many more times over - of having my breath taken away on opening a typewriter case.  A gold-plated Royal Quiet De Luxe goes on doing it for me every hour of every day. So, too, though on a slightly less dramatic scale, a Royal Eldorado. Or an Underwood Quiet Tab. Or a pink Olivetti Pluma. Something as simple as a little Smith-Corona Courier, still tucked tightly in its case. The humble Nippo, no less. Machines of this “modern” vintage can, for me, take their place proudly alongside the pioneers, if only for their handsome looks. There is a younger, but no less fetching beauty in them. 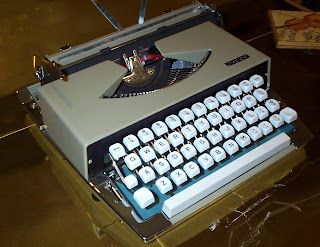 Before Christmas last year I visited fellow Australian collector Richard Amery in Sydney. Richard has a particular penchant for Imperial Good Companions, and has an impressive and full collection of them, ranging from the Regent through to the No 8. While I chatted outside on the patio with his patient wife Marie, Richard busily got out all his IGCs and put on for my benefit an impromptu display, one which swept across the entire kitchen and dining area of his house. He stood back admiring his own work, his special collection within a collection, as if it was the first time he had ever seen the Imperials all together, side by side, at one time. I suspect I heard a quiet but sharp intake of air. I'm sure I saw a puffing of the chest. Richard had every right to be proud; it was a grand show. But then he turned around and floored me with his coup de grace. Apropos of nothing to do with Imperials, he opened the case of a pale green Bijou, a rebranded Optima P1.  I don’t think I’ve ever seen a more beautiful machine. But, then, that’s me: just a sucker for a pretty typewriter.

Posted by Robert Messenger at 15:26

Terrific post.
I admit I am just shallow enough to have been brought to typewriter collecting (in my own limited way) simply by the physical beauty of the machines (and especially as photographed and exhibited online by a few notable typographic evangelists).