Typewriters as Shot Puts: Postal services of the World Unite

There’s a new scam on the horizon. It’s almost quite clever; a little more subtle, perhaps, than the "I'll send you $48 million" Nigerian bank scam. Had this one not been filtered straight into my junk email box, thus automatically arousing my suspicions, I might easily have been duped. A message arrives, purporting to be from UPS, stating than under new European Union regulations, I need to pay 119 euros duty on a package that has been consigned to me from . The sender hasn’t paid the tax, so to receive the item I must. I simply get in touch with a Jennifer Watson, pay her the tax, and all will be sweet. Except I haven’t bought anything in in quite a while (since a Gossen Tippa and an Olivetti Pluma 22 few years ago), and I’m not due any packages. I did post three large boxes of my own laundry from last year, as I had done from Dingle in the west of . But, unlike two smaller boxes I had sent from England a couple of weeks earlier, these all arrived here soon after I did, and in good shape. It’s a lot cheaper than paying for excess baggage, and far less hassle. 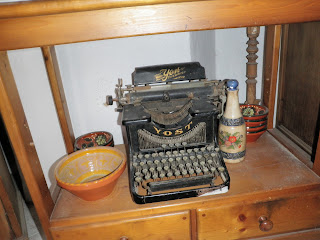 I would have liked to have been able to afford to buy (at a mere 300 euros) and post back a dusty old Yost I saw in a dusty old antique shop on the old town side of the main viaduct in Ronda. I even found a young passer-by who interpreted an offer from me to the dusty old man behind the dusty old counter. But I shuddered to think what state a beautiful old machine such as this might arrive in, so I left it where it forlornly sat, amid a cluster of dusty old Spanish ceramic vases on its dusty old shelf. It was never going to appear on eBay, and will probably still be there when next I visit this marvellous dusty old town.
When one buy things on international eBay, as I have done regularly over the past six years, one gets to learn the ropes about the various postal services. And also about the apparently legal scams, some of which have been tried on me here, by shipping companies wanting to charge inordinate amounts in unloading and handling fees. As I have – thus far – been successfully able to argue with these chancers,  I had already paid the sender for door-to-door delivery, so a to-my-door delivery is what I expect. But I have been successful, on occasion, only after threatening to go to my local MP to expose this questionable practice. 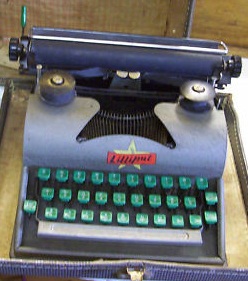 ’s Royal Mail, like Canada Post, is notoriously slow. But unlike Canada Post, the Royal Mail charges an arm and a leg. Last week I inquired of an Elliott Moran at Rudyard’s Curiosity Shop in Solihull in about the cost of posting a Lilliput toy typewriter to me. Told it would be €57.50, I asked if this little 6kg package would fly first-class, be drip-fed champagne on the way over and arrive the day before yesterday. Moran replied that instead of champers, the best he could offer was bubblewrap. Often one gets the impression British eBay sellers are genuinely embarrassed by what the Royal Mail charges – it must impact on sales. But while the costs are bad enough, the slowness with which the Royal Mail delivers makes things far worse. Like Canada Post, what it calls air mail (for which we tend to think of a jet plane) must in fact be a very slow boat to . A consignment of tiny typewriter card holders, which I wanted for a presentation in Melbourne last month, is still on its way from Canada - two months after purchase. PayPal's tracking number is useless. Canada Post's website gives nothing away. 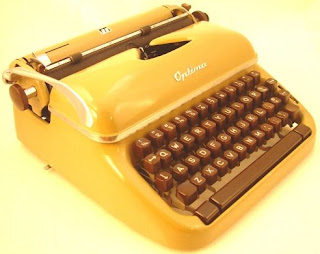 The other side to all this is that with the United States Postal Service or Australia Post, while delivery is generally quick, one always has one’s heart in one’s mouth thinking of the condition in which any precious items might arrive. About five years ago now, I was told in all seriousness by an Australia Post deliveryman that he’d actually witnessed a box addressed to me being used for shot put practise at the mail sorting building in Fyshwick. One box, sent to me from North Carolina and containing a gorgeous and expensive Optima typewriter (above, as it looked BEFORE posting), was delivered with its original square shape changed to something more resembling a enneagon, such was the damage done to it in transit. Naturally, despite great care taken in packing by Scott McNeill of the Vintage Typewriter Shoppe, the machine was in bits. Since it was registered post, I took photos, a statement about the state of the box and its contents from the local post office manageress, and lodged a complaint. In due course I was told this wasn’t Australia Post’s fault, and it accepted no liability. Given the many hundreds of millions of dollars by which Australia Post’s profits have been boosted by eBay sales over the past decade, I thought this was irresponsible. But our choices of carrier are decidedly limited. 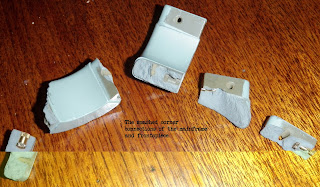 I told a gathering in last month that one of the first typewriters to be sent to this country, a Sholes and Glidden imported by then mayor Alexander Kennedy Smith in 1876, arrived seriously damaged in transit. No one would accept responsibility. This, I said, seemed to set a tradition Australia Post wants to proudly uphold. A month or so ago a woman sent me a Hebrew language Hermes 2000. She simply posted it in its case, with no packing or protection inside or outside the case, just an address sticker on the exposed case. When I opened the case, the thing fell apart (see some of the damage above).  And when I asked the sender why she had posted it that way, she said she’d been advised to do so by Australia Post.
I’ve mentioned new-fangled inventions which were shipped into in the latter part of the 19th century, in particular Sholes and Glidden typewriters by men like Kennedy Smith, W. H. Masters and G. W. Cotton. I’ve wondered at the cost of shipment in those days, let alone the cost of the machines.  I know Mark Twain paid more than $US100 for one such typewriter, and almost immediately considered himself duped. Given they now cost more than six figures, would one entrust USPS or Australia Post to deliver it? No, I think I’d have to cuddle it in a first-class seat, and drip-feed it champagne on the way over.
Posted by Robert Messenger at 10:36

I know several collectors who have traveled overseas in person to retrieve a prized typewriter.

I have had some luck recently in offering a $20 bonus if a machine arrives unharmed and packed according to my instructions. People pay more attention, it seems, if there is a little monetary incentive.