Have Typewriters, Will Sing 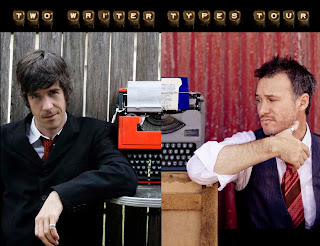 Australian singer-soungwriter David Ross Macdonald is as good as his word. And it’s a typewritten word.

Unlike 99.99 per cent of modern musicians, Macdonald not only issues his own press releases – but he uses a manual portable typewriter to write them.  Thus the releases arrive in newspaper offices and radio and TV stations around the country just as he composed them – not even photocopying is involved.

In a covering letter, Macdonald says, “forgive the typos .. but I am over the laptop and would rather spend a little more time simplifying it all."
MacDonald is promoting a new album, Thorns To Sleep,  and a national tour – called THE TWO WRITER TYPES TOUR.

The tour poster shows Macdonald with a Hermes Baby and Heath Cullen with an Olivetti Dora. The blurb says:
“They may be sharing the stage, but when it comes to mechanical Olivetti Doras and Hermes Baby Swiss mades, tunesmith David Ross Macdonald and the lyrically erudite and captivating Heath Cullen pack their own typewriters and announce a co-conspiratorial national road trip of sorts, the TWO WRITER TYPES TOUR. 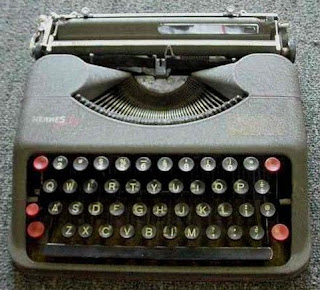 Macdonald is celebrating his latest solo effort Thorns To Sleep with a special limited issue vinyl release while Cullen expands upon his acclaimed band album a storm was coming but i didn’t feel nothing, which has been receiving rave reviews.”
Thorns To Sleep is described as “a beguiling work reminiscent of the quintessential folk albums of the early 70′s by British folk luminaries such as Nick Drake, John Martyn, Bert Jansch and John Renbourn.
The record showcases Ross’ fingerstyle guitar prowess on his  1935 Gibson acoustic along with subtle, lush and ambient  accompaniments of double bass, cello, vibraphone, bass clarinet, piano and even a small brass band. The album succeeds in its evocation of a rare and sonically sublime nocturnal dreamscape through which Macdonald conjures narratives of love, loss, hope and life’s ironies and crypticisms sung in his own authentically warm  and understated style. 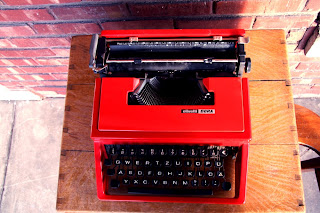 Acoustic Guitar Magazine likens Macdonald’s vocals, lyrics, and intricate fingerstyle guitar style to “a collaboration between Nick Drake and a mid-1970s Bruce Cockburn … (He)  deals in subtlety, intimacy and nuance with a tunesmith’s hand that coins songs and music with a haunting and poignant quality.”
Born of a jazz musician father, Macdonald returned to his musical roots after some years underground as a geologist and now plies his trade not only as an internationally touring songwriter but also as a jazz turned folk-roots drummer for the acclaimed Australian group The Waifs.
Macdonald constantly tours internationally armed with a carpetbag of songs that he illuminates in his own inimitably reserved yet intense, poetic style.
“David Ross Macdonald is one of those few songwriters like Nick Drake, Conor Oberst (Bright Eyes), and Josh Ritter that can captivate his listeners armed only with a voice and guitar.”  American Songwriter Magazine
“…deft guitar playing … polished songwriting … pristine, thoughtful folk rock…”  Penguin Eggs Magazine
See
http://www.davidrossmacdonald.com/DavesWeb2.0/ 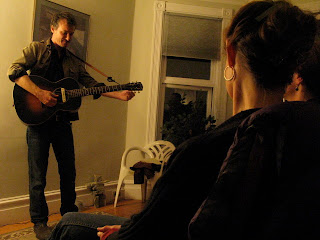 Posted by Robert Messenger at 15:22

Hey Robert ... thanks for the shout out here, much obliged.

One of the things I get a kick out of when touring with the Hermes Baby is watching the folks attempting to type their email addresses out. With no number "1" nor "0" keys it throws some people completely off of their guard ... "the one is the lower case L and the zero is an upper case O" I mention to the bewildered and uninitiated! But it's a sweet portable writer and I have the original purchase receipts and touch typing cue card from 1954, it is a blast. All the best, DRM