Typewriters in a New Hue 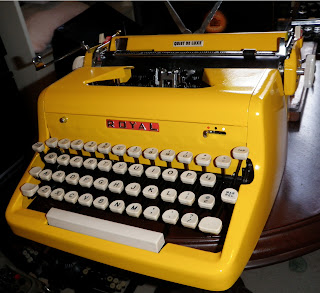 I love the best.
- Colours, 1965, Donovan Leitch
Call me a vandal if you will, but occasionally a post-War typewriter will turn up which is just crying out for a serious makeover. With its so-called “rugged”(yet obviously dull, plain grey-fawn) paintwork, it might not have started out in life looking all that flash. But certainly years of neglect (rust and dust, faded, chipped or marked paintwork) will have done nothing for its appearance.

I knew this model of the Royal Quiet DeLuxe had originally been marketed in a very cute baby blue, as well as in pink and fire engine red (I have the last two in my own collection). So I decided something different, a golden yellow, was appropriate – I have no intention of selling this machine. For one thing, it now stands out and looks so superb on the shelf. 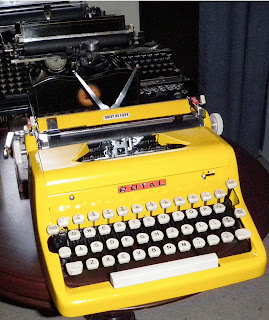 Some may be aware that on Charles Gu’s myTypewriter.com website, selling for a princely $US595, are “ Royal Portable Typewriter of 1950s in Pink (Restored) - Due to popular demand, this original 1950s Royal flagship portable is now available in pink color! In addition to our standard restoration process, we have given this machine a fresh coat of paint based on its original color and all decals have been preserved or restored to their original condition. In essence, we are offering a like-new machine that is not only beautiful but also fully functional. This 1950s Royal model originally housed in various colors in glossy and rugged finished paint. These restored Royal portables sacrificed none of their durable work ethic for style and it is a true workhorse in any regard.” 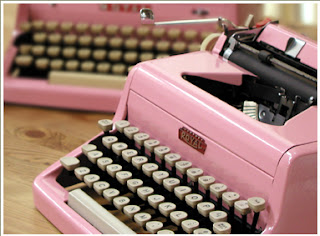 So if myTypewriter.com can do it, why not me? Except I’m not chasing $595. This one’s for my own viewing (and using) pleasure. 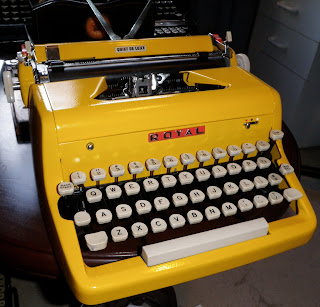 Of course, I shouldn’t be singling out myTypewriter.com as a sole example. Over at MrTypewriter.com, Dan Puls (at first glance not so fond of pink as his rival, says (in regards to a pre-war Royal QDL), “This old timer has been really wanting to get back into the game but had the problem of so many in this day and age, and that is the color. OK - listen up - I realized that to keep this young at heart old banger in the ball game a complete makeover was in order … Now this is where MrT works his magic with a facelift to the old timer. Same old Hemingway favorite, but now with a touch of color. So here he is before you representing the best of both worlds for the color conscious wordsmith. In order to keep my pals out in typerland happy, I will be doing these old Hemingway favorites in other flavors too. (Please no pink - as we are talking Hemingway not ... well, I better not go there...). 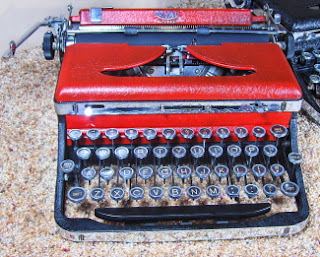 And yet, and yet … MrTypewriter does go for a touch of pink. His justification? You have to read this to believe it: “Here is the story Guys. Now listen up, scenario one: you screwed up big time with your lady friend, wife, whoever, he or she wants to sit in there (sic) room (with door locked) and cry about it, telling her friends/Mom she is going to write/call her attorney Monday first thing. What to do? This is were (sic) Mr T comes in. In the old days I would tell my customers I could mend anything but broken hearts. That no longer is good enough in this changing world, if I want to keep out front for my next fifty years in the business. So here is the deal: If you want to make out like a bandit I put a package together that will get you out of the doghouse and back in the bedroom. Works nine out of ten times. However, I have scenario number two as a back-up plan just in case. Mr Typewriter.”

The accompanying photo shows the same model Royal QDL in shocking pink (literally and figuratively) in a pink setting, with pink champagne, pink china and pink bubblewrap (curtins?). All so hideously revolting I can hardly take my eyes off it. What do they say about a crash scene and averting one's gaze? But I have a fair idea what my lady friend/wife/whoever might say if I try on the Mr Typewriter scenario: “Yuck!!!!” 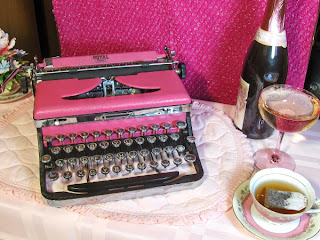