Antares: Typewriter Names to Confuse Us

I know it’s probably stretching the imagination a fair bit, but try to picture an Italian guy in charge of naming various like-models of Antares manual portable typewriters back in the 1960s. “We’ll call this one the Annabella,” he says, “and this one the Domus. In 50 years’ time, it’s going to drive some Australian typewriter collector crazy.”
As it turns out, he’s wasn’t kidding. I’ve just acquired an Antares Domus. It looks like this: 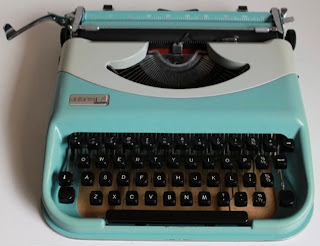 And here’s the Antares Annabella on the genevatypewriters blog of Adwoa Bagalini: 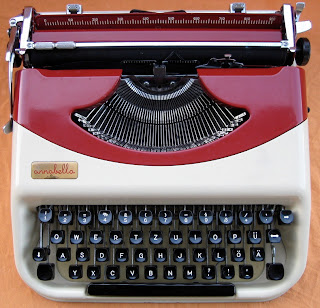 I’ve never had the opportunity to lay my hands on an Annabella, but I’ve been admiring this model from afar. So when the lookalike Domus came up on Australian eBay, I just had to have it. $200 later, it’s mine.
Naturally, I did a web search for the Domus. One other came up – it had failed to sell for 12 euros on the Italian eBay. But, then, it doesn’t look a patch on mine (Note, however, the familiar case - it's the one used for the Olivetti Dora and later models of the Lettera 32): 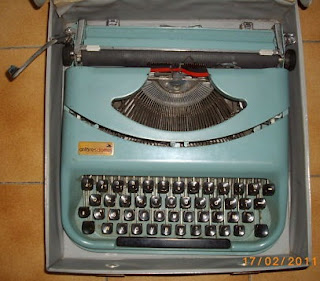 So what’s the difference, if any, between an Annabella and a Domus? To be honest, I have no idea. And further confusing the issue is that on the cover of the manual for the Domus is an illustration with the same colour combination as the Annabella on the genevatypewriters blog. (The Domus, by the way, was originally sold by my friend "Tom", the typewriter man on Elgin Street in North Carlton, Melbourne). 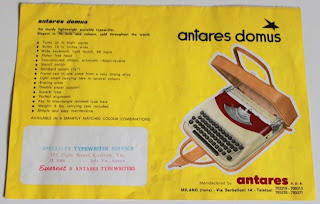 My interest in the Annabella was aroused while I was researching my typewriter book. I first saw photos of it on the genevatypewriter blog, then came across the same model on Richard Polt’s The Classic Typewriter Page website (below). “Goodness,” I thought, “that’s one gorgeous looking typewriter.” 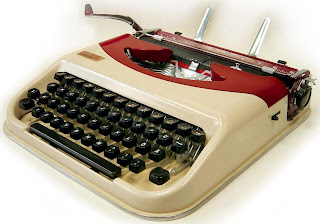 Yet something gnawed away at me. Eventually, when I was able to avert my gaze from the beautiful combination of cream and burgundy, I realised what I was looking at: it’s an Underwood 18! 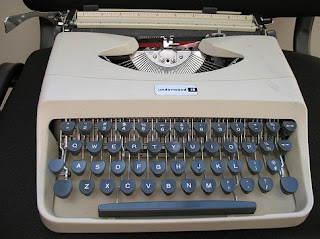 Instantly, I got on the telephone to my typewriter collecting friend, Richard Amery. He called up the image on Richard Polt’s site. “Yes,” he confirmed,  “it certainly looks like an Underwood 18.”
Now Richard Amery is a man who has looked so often, so hard, at so many Silver-Seiko and Nakajima ALL variations of Imperial and Royals typewriters, he can actually tell them apart. And believe me, that takes some doing. I’d reckon the only other guy who could possibly do that is Will Davis. So when Mr Amery said he thought the Annabella and the Underwood 18 were at least closely related, if not exactly siblings, I knew I was on the right trail.
The venerable Mr Davis had already been on my mind. I recalled having read on his Portable Typewriter Reference Site that he suspected some design collusion between Antares and Olivetti. Of course, the Underwood 18 was made by Olivetti. And sure enough, on a web search, I came across a reference to the Underwood 18 on Will’s Portable Typewriter Forum. The Underwood 18 and the Antares Annabella were more of less the same typewriter, he said. On Will’s website is also an Antares from the late Tilman Elster’s collection: 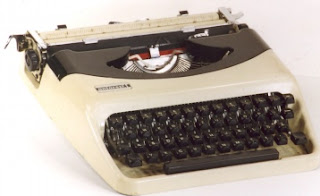 What intrigued Richard Amery and I – apart from the fact we didn’t previously know of the existence of the Annabella – is that, to put it bluntly, the Underwood 18 is one of the most common and least desirable typewriters available in .  For one thing, it’s a very bland looking machine, which is why the bedazzling Annabella temporarily threw me.
In fairness, the Annabella and the Domus have obvious technical advances on the Underwood 18. The Underwood 19 (below) is a step up from the 18, too. Still, give the Underwood 18 or the 19 a lick of some more appealing colours and a charging horse might not be able to tell the difference. 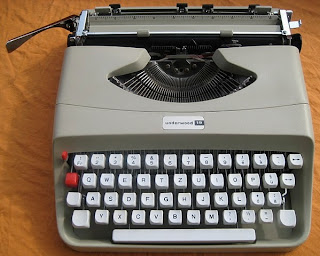 In , our first-hand knowledge of the Antares is pretty much confined to the much more common Parva. Two of these are listed on eBay as I write, both at around $29 and, after being listed for three or four days, no bids. The two seen below are from my own collection and are the average fare, the green one on the right being called the “Little Star”.

Another Antares seen in is a later, plastic model, sometimes called the . Except here it has been relabelled a Mercedes. Though it is made in , it carries a once-proud German brand name. The “catch-pull” carriage lever device is prone to all sorts of problems, not least of which is a failure to actually catch the platen. 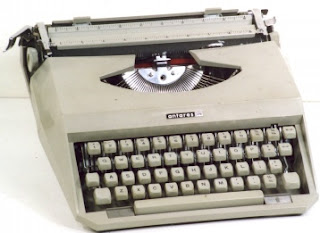 Richard Polt tells me he also has an Antares Hilton, but I have yet to see what this one looks like.
The Annabella-Domus-Underwood 18 models are clear evidence supporting Will Davis’s suspicion about Antares and Olivetti being “in league”. But another Underwood-Olivetti model, the 21, continues to intrigue me. While the Underwood 310 is obviously the Olivetti Dora in everything but name, the 21 looks like no Olivetti or Antares model that I have ever seen (though it does have some features of the Olivetti Studio 44): 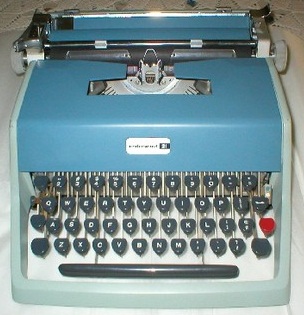 Meanwhile, some more angles on the Domus: 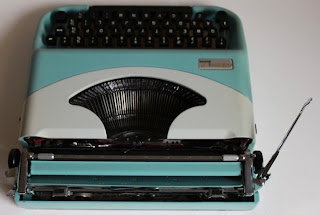 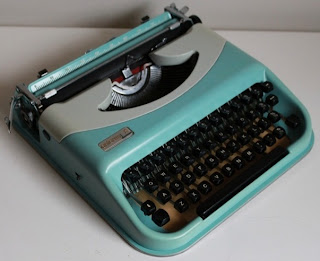 Posted by Robert Messenger at 00:22

Why, hello there! I was watching the Domus auction closely (of course amused by its close resemblance with my Annabella) and good to know it will be going to a dedicated collector!

Indeed, Antares seems to have had very close links to Olivetti Underwood, particularly during the late 60s when the plastic machines (18 and 19) were built.

There is at least one other rather interesting variation you have not mentioned, which is the Antares 20, with in-built carrying handle! Here is an ad for it on an Italian website: http://annunci.ebay.it/annunci/collezionismo/catania-annunci-catania/macchina-da-scrivere-antares-20-efficiency/12473256

Internally, it appears to be more or less the same mechanism as your usual 18/ 19/ Parva/ Annabella/ Domus!

My Hilton looks just like your Domus, apart from the name. It comes in a neat, sturdy, slim wooden case.

Such beautiful little typewriters ... I wish they were more of a pleasure to type on.

This blog is fast becoming a go-to reference source. This is a very informative post. I didn't get a clear idea of the time frame, particularly with respect to the underwood 18. Is it early or late 60's or maybe 70's?

Hai, I have a typewriter Antares 280 and I do not know how to fix it, anyone can help me?

Hello, what are the dimensions of a Domus? Is it larger than the Antares Alba A4? Many thanks from Italy - Davide

Found today a nice Antares Capri for only 14 Euro. Mine is working perfectly! A pleasant ultraportable machine! So cheap that I can use it everywhere, without fear of incidents (bumps, shocks, drops). All the best from Como, Italy. Davide