The Olympic champion, His Corona, and the Australian Secret Police 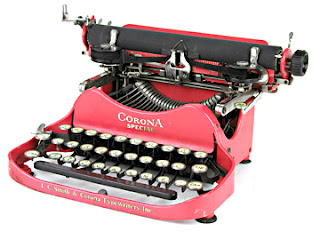 Since when was using a Corona portable typewriter a sure sign the typist was a dangerous subversive? In early 1920s Australia it was, at least according to this country’s secret police.
In the wake of the Bolshevik uprising in Russia, Australian Federal secret-service agents went on the hunt for reds under our beds. And one of their chief suspects was an Englishman called Emil Voigt – a former Olympic Games running champion. 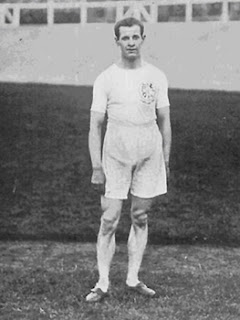 What made Voigt the subject of suspicion? Well, for one thing, as the spooks reported to the Government, he used a Corona typewriter!
In Australia’s National Archives here in Canberra, there is a record of one spy’s report on Voigt: “January 11, 1921. Australia House to Attorney-General's investigation via Prime Minister's Department in Melbourne. He [Voigt] is a man of very pronounced communistic and socialistic [leanings] who had been travelling around Europe a good deal in the past two or three years. It is suggested by my informant that he is acting for [a] Bolshevist element which is seeking to poison the world. If so, he is a very dangerous person to have in Australia. He is practically a vegetarian and uses a Corona typewriter.”
Another thing which aroused suspicions was Voigt’s interest in early radio equipment. Voigt was indeed a pioneer of Australian radio. He had travelled to Los Angeles in 1923 and returned two years later with a passion for the medium. He founded Sydney station 2KY and was founding chairman of the Australian Federation of Commercial Broadcasting Stations. One of his other interests, linked to his sporting past, was wrestling. He wrote Modern Wrestling Holds in 1933 and commentated on wrestling on 2KY. But his position at the station was undermined while he was on another trip to the US and to Europe, including Soviet Russia.
Voigt died in Auckland, New Zealand, on October 15, 1973, aged 90.
Emil Robert Voigt was born in Ardwick, Manchester, on January 31, 1883, the son of a German-born mantle salesman. The 163cm, 52kg Voigt won the gold medal in the five-mile race at the 1908 London Olympic Games, in spite of having to have a plaster-of-Paris support built into his running shoe after suffering a dropped arch and torn muscles in the semi-finals. 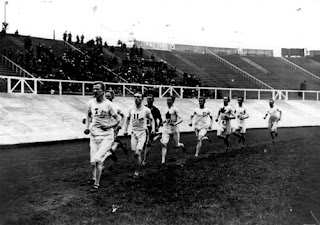 Voigt was the only winner of this event at the Olympics proper - it had also been held at the “Intercalated” Games in Athens in 1906. Voigt also won the British four-mile championships in 1908 and '09 and the mile title in 1910. He toured Scandinavia and Russia in 1909 and came to Australia first in 1911, winning the Victorian State mile championship in 1913 and setting Australian two- and six-mile records on what he described as “pony tracks”.
Apart from being “practically” a vegetarian, he was a teetotaller and non-smoker who put great store in massage and physical wellbeing. In 1912 he started the “Olympic self-massage course” and wrote on his Corona Self-Massage: The Way to Greater Health, Virility and Happiness.
Leading Australian historian Chris Cunneen (below) wrote Voigt's entry in the Australian Dictionary of Biography. Cunneen said of his subject, “Voigt was an intriguing subject, a multi-faceted personality. A champion sportsman, a Labor idealist, and yet throughout his life, especially in his last days, a successful, solid businessman.”

In his ADB entry on Voigt, Cunneen wrote, “A restless, contradictory idealist, he had served Australia's early wireless industry and fought in the cockpit of 1920s Sydney Labor politics.” Even as early as his 1909 European tour, Voigt was noted as being fluent in English, German, Italian, French and Spanish. As a master engineer, he designed the cinder track at the Elaintarha Stadium in Helsinki (below), where the legendary Paavo Nurmi was among those who set 12 records on the surface. Voigt also built the first cinder track in this country, in Melbourne. 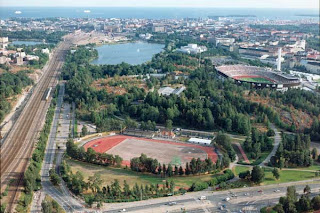 But in Australia, Voigt's language and engineering skills and his life-long interest in the Labour movement (he was, after all, from Manchester) were to haunt him. Voigt returned to Manchester just before World War I, then arrived in Sydney in 1921 and controlled the research bureau of the Labor Council of NSW. As such, he was labelled a “Trades Hall Red” and came under the surveillance of the Federal secret service.
Where the secret service was certainly well off the scent was in reporting, “[Voigt is] Probably the great amateur runner who represented England in the 1912 Olympic marathon”.
But Voigt did clash with then Prime Minister Billy Hughes, spoke out in support of revolution and urged communists and socialists to unite with Labor. He was linked with “extremists of the extremist kind”. He wrote Control of Industry: From Arbitration to Industrial Councils (1922), Labor's Answer to Bruce*: Why the Labor Movement Should Vote No (1926), 1929’s Lock-out in the Timber Industry: History of the Struggle of the Timber Workers and the NSW Trade Union Movement against Capitalism's Shock Attack on the Workers, the Lukin Award (1930) and Menace of Rationalisation: Showing the Need for Shorter Working Week (1930). *Australian prime minister Stanley Melbourne Bruce.
Cunneen said, “Voigt was right there during a fascinating period in Australian Labor history, at a time when it discovered its very soul.” Voigt returned to London, resumed broadcasting to Australia and New Zealand, then finally settled in Mangere in Auckland in 1947 (he is seen below still running, at an old age, in Mangere, and with his Olympic champion's certificate). 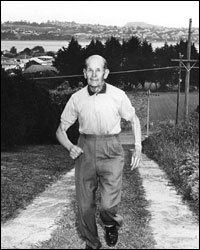 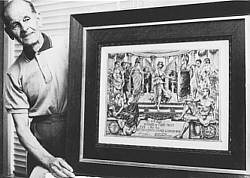 Posted by Robert Messenger at 19:33

What a rich and amazing life. Thank you for this entry.