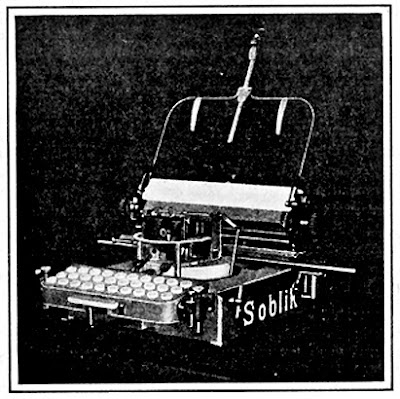 I will briefly return to the subject of attempts to market a pneumatic typewriter - covered in an "On This Day in Typewriter History" post in early January - because Richard Polt has been kind enough to scan and email me further details of the Max Soblik machine and a rare image 0f it.
It is also timely to look at the Soblik pneumatic typewriter because this month marks the centenary of  Soblik's final push to succeed with his machine. After a three-year break from it, Soblik applied for four last patents as he tired to perfect the pneumatic typewriter.
The article Richard has sent me is from a 1908 issue of The Literary Digest. A similar article appeared in a New Zealand publication, Progress, on August 1, 1908, and I have included that below the Digest piece:

Posted by Robert Messenger at 22:14

Have to love that part about the "..gradual breakdown of the nervous system." that typing brings about.

I've felt it myself, creeping up on many occasions!

It really sounds like a great invention, doesn't it? I wish it had been manufactured.

Would you mind if I referenced this on my site? Doing a blog post about a similar topic and I think it would link well.