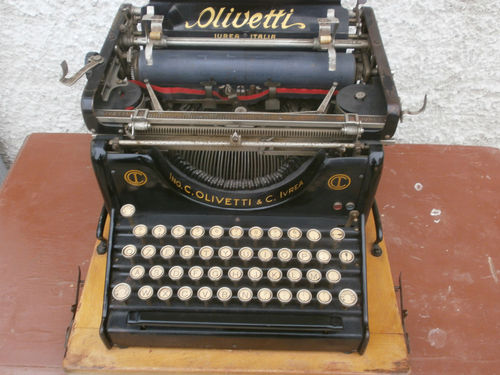 We were alerted the other day to this interesting Olivetti auction on Italian eBay. With more than two days still to go, the 36 bids have pushed the price up to 1080 euros ($US1420). The auction is here. In Australia, a rare Charles Spiro-designed Columbia Index has a Buy it Now price of $US7000 on it. It's for sale in Melbourne. The auction is here.
WISHES DO COME TRUE - AND SO QUICKLY 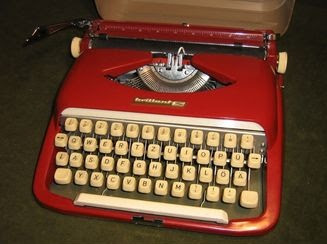 If I had a lazy $10,000 floating around, both of these machines would be mine. As it is, the two typewriters will have to go on to my wish list. I only wish my wishes were fulfilled as smartly as those of some of my friends. After I posted on my bright red ABC-made Neckermann Brilliant S the other day, Richard Polt commented that he was putting one of these models on his wish list. Believe it or not, the next day he owned one. True story! Richard, by the way, jokingly labelled me "such a bad influence". I was only getting square!
HERE I COME!
Take me home, country roads. Some of that lazy $10,000 is going elsewhere, toward getting me to Herman Price's home in West Virginia (via Cincinnati) for the sixth annual typewriter collectors' meeting in mid-October. Will and David Davis are also among the first to sign up. Maybe Richard, Will and I could all turn up with our racy Neckermanns?
BRISBANE TYPE-IN 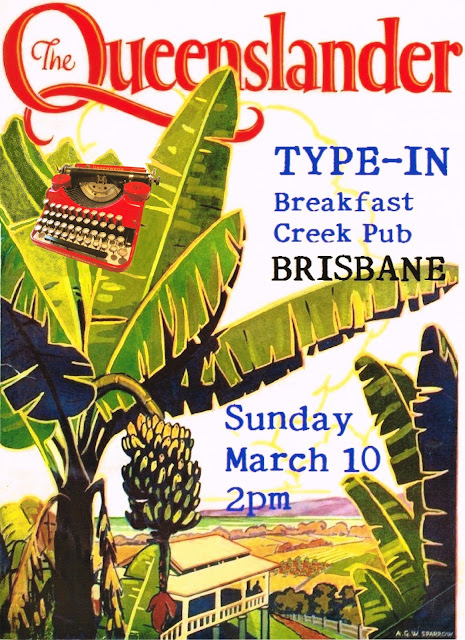 In the meantime, of course, we have Australia's first-ever Type-In coming up at the Breakfast Creek Hotel in Brisbane from 2pm on Sunday, March 10. I'll be there with my maroon Everest, among other lovely typers. Contact Scott Kernaghan at the Filthy Platen if you plan to attend. It'll be a gas!
WATCH OUT FOR ...
*John Lambert 0f New Haven, Connecticut, has sent me the 1968, 1973 and 1979 portable typewriter reviews in British consumer magazine Which? (we have already posted the 1962 review). These later reviews make absolutely fascinating reading. You're not going to believe some of the results. I will start by posting the 1968 edition tomorrow. 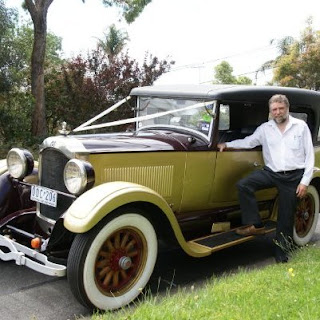 *Victorian typewriter lover Michael Klein (above) will soon start a new series on this blog, called The Life of a Typewriter Technician. It will be something well worth waiting for.
LOST AND NOW FOUND
A few weeks ago I posted on the way my house benefits from lost typewriter bits. When the bits disappear, the part of the house they were last seen in gets a good clean-up. There were several amusing comments on this, including one from Scott Kernaghan, who said he was afraid to vacuum in case the missing bit was gobbled up and lost forever.

Happily, I have since found two of the missing bits, a keytop from a Sears Courier (Lettera 22) and an arm off the feed roller cradle from the Remington Polt-Righter. The keytop had hit a wall 12 feet from where it left the machine, and sat on the floor behind some stacked typewriters. The feed roller arm was outside. I bent down to pick up a tiny screw and there was the missing bit. Now for the Swissa name badge. 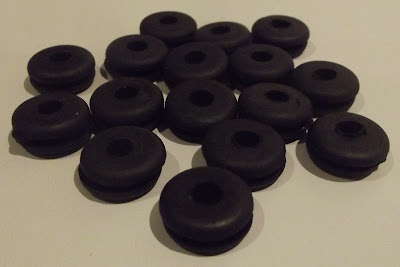 I also mentioned having trouble finding (new) grommets. First I tried a big hardware store; no luck. Go to the electrical wholesaler, they said. Not there, but the guy behind the counter sent me to a rubber goods shop. They had them, for the princely sum of $1.60 each.
RETURN OF THE OLYMPIA TRAVELLER C 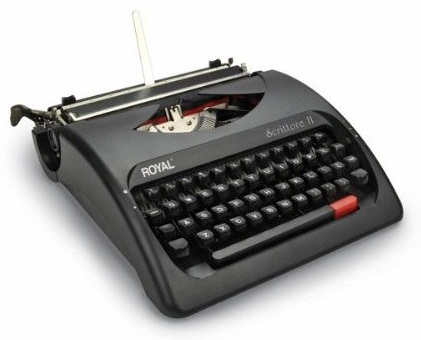 I reviewed the Chinese-made Royal Scrittore in ETCetera just last September, and now the Adler Royal Scrittore II is on the market. The prices on Amazon are a bit steep, reaching up to $US150. The Scrittore II marks the return of the Olympia Traveller C. This same stylish, modernistic mask was used on that Olympia model, which has been off the market for a few years now. The original design was done by Reiner Kieling for Olympia back in 1990. Fancy the Adler name being attached to an Olympia design!
YOU HAVE TO SMILE 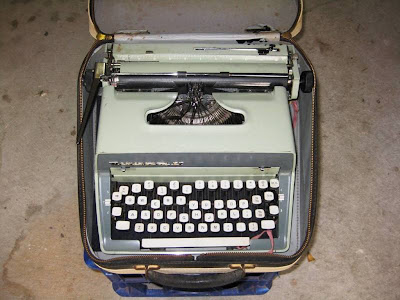 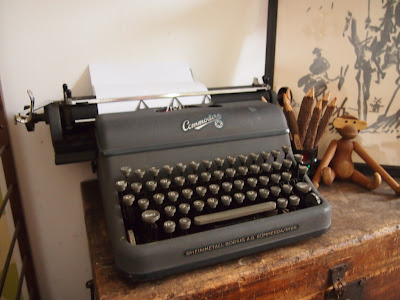 Our amusing friends at o-so-funky in South Australia are calling this Canadian-assembled Rheinmetall a 1930s vintage machine. Commodore boss Jack Tramiel was still in the ghettos of Warsaw in 1930s! But sillier still is the description of this Commodore as "funky". Oh, get serious! This only just pips out the claim that the Commodore is "Very very rare – could not find any information on the internet about this typewriter" O-so-funky couldn't have been trying too hard. The seller also thinks it was made in Germany (well, the parts were at least) and that it has a "superb matt black" finish. 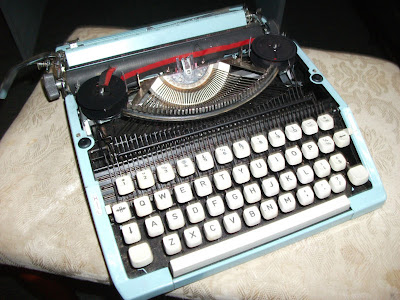 How's this for ambitious?  The topless Silver-Seiko was offered as "Oldschool Typewriter. Dont know brand name, cant find one [nor the apostrophe key]. Im sure somebody out there knows. Faulty space bar not working, keys sticky. Would make cool display piece or fixable with know how or use keys for craft an jewlery." Yeah, a white plastic keytop necklace, every girl's desire. At $10, there were no takers. 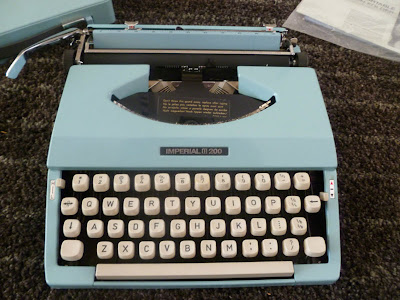 Yet someone paid as much as $111.11 for this Litton Imperial 200. Probably a record for a Silver-Seiko. 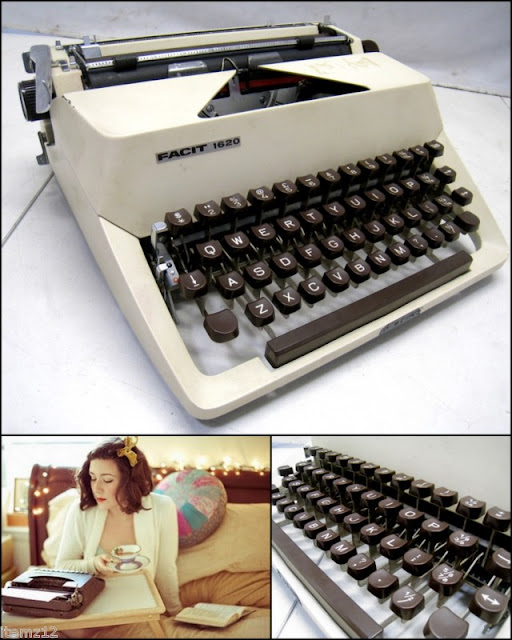 Who said something the other day about young ladies still being used to sell typewriters? OK, fair enough, but at least she might have been using a Facit 1620? 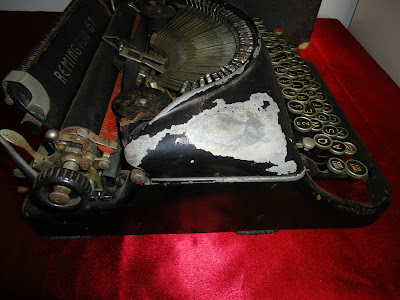 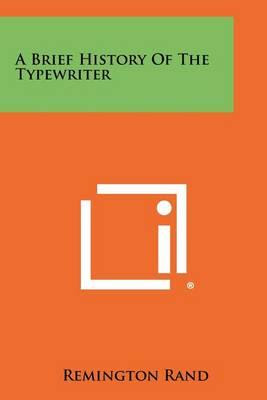 There are an awful lot of eBay listings for typewriter-related books, including novels and histories, and CDs. The potential buyer should be aware that almost all of these are in the public domain and can be readily obtained online for free. For example, the asking price for this Remington-Rand A Brief History of the Typewriter ranges from $69 to $39 from the same seller, booktopia. That's $69 for six small pages of text in large type. The whole 1961 booklet is available on this blog here. At least mine has a typewriter on the cover. 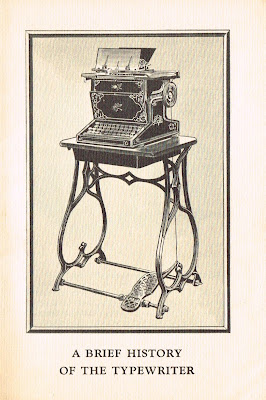 You can just go to the post, save the images and print your own booklet for a small fraction of the price. That may well be where booktopia got its own print-by-order book from. 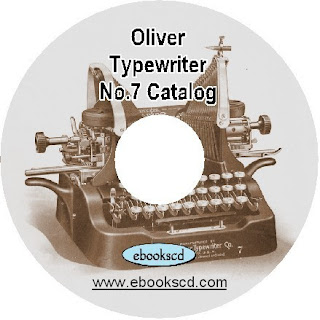 Similarly, $9 CDs of Oliver or Remington catalogues from ebookscd. Just go to this site and get the whole thing for free.  It's a scam to charge for things that are free and in the public domain. Start here by saving this image of the Oliver No 7 catalogue cover: 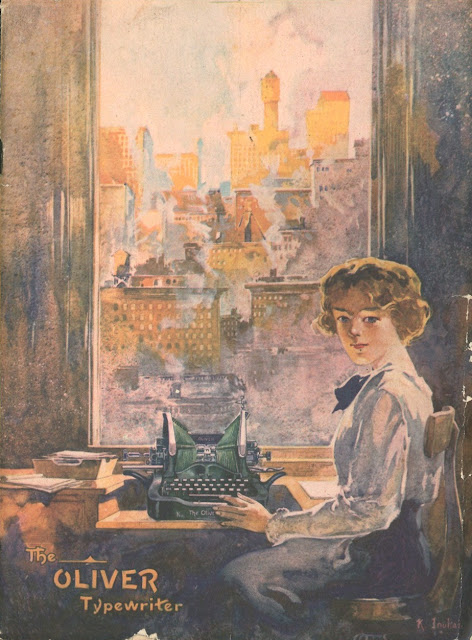 SHINING A LIGHT ON TYPEWRITERS 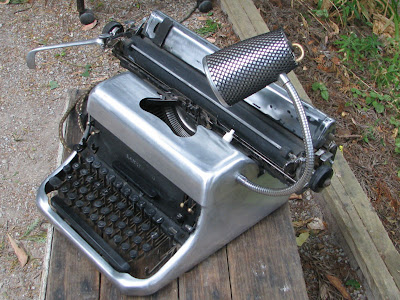 The seller wanted $600 for this "Outstanding piece of original industrial age decor, an absolute one off. Originally a Remington Rand typewriter from the 40's buffed and polished making the aluminium body shine with an amazing luminescence. Wired up as a desk lamp with a fantastic adjustable vintage lamp fitting complete with switch."
AMUSING LITTLE FRENCH FILM
Here's a little something to bring a smile to your face. First a short animated promo for a typewriter chair, then some REALLY fast typing action from the French champion typist who endorsed the chair. (Warning: A quick flash of knickers can be seen). It's here.

Something Pythonesque about Mlle's smile when she faces the camera.

What an interesting round-up of items!

Yes, I was amazed that the day after I became aware of the Brillant S, one turned up in red as a "buy it now," from a German seller who was (unusually) ready to ship to the US. I am looking forward to owning my own little "sports car."

Can't wait for your trip to the US-- we're going to have a blast. (And there are grommets galore in my local hardware store.)

I am very much looking forward to the new Which? stories and to Michael Klein's reports on the life of a typewriter technician.

How interesting that the design for the Traveller C / Scrittore II is already 23 years old. It has aged well and still looks very attractive to me. I am quite tempted to get a Scrittore II, although I'm sure the quality is nothing to type home about.

That Remington KMC would make a nice Silver Surfer if it hadn't been stuck to a lamp. Why did they get lazy and leave bits of black paint on the paper table?

Last comment: you are right to warn us about people selling information on paper or compact disc that can be downloaded for free. This includes photos, music, videos, books, etc.