QWERTY Under Attack - Yet Again!

A CALL TO ARMS!
OR SHOULD THAT BE THUMBS?
It's time to man the barricades and marshal the revolutionary forces. QWERTY is under attack - yet again.
Fear not, brave Typospherians! In the coming battle, remember that QWERTY has been around for 140 years now, and has already seen off many a challenge, not the least of which came from Blickensderfer and from Dvorak. It's got a bit of form, which this latest challenger has not.
Know ye that it will see off KALQ too!
Last week BBC Scotland News reported that "KALQ thumb-type keyboard takes on Qwerty". 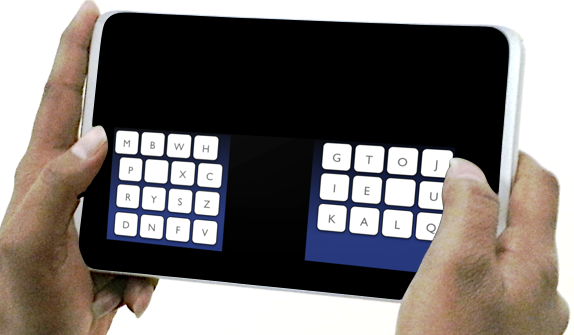 As well, CNET reported "Android keyboard Kalq quicker than Qwerty, say scientists".
The BBC said, "Researchers have created a new keyboard layout which they claim makes 'thumb-typing' faster on touchscreen devices such as tablets and large smartphones. Dr Per Ola Kristensson, from St Andrews University, Fife, Scotland, said traditional Qwerty keyboards had trapped users in 'suboptimal text entry interfaces'.
"The new design has been dubbed KALQ, after the order of keys on one line. Its creators used 'computational optimisation techniques' to identify which gave the best performance.
"Researchers at St Andrews, the Max Planck Institute for Informatics in Germany and Montana Tech in the US joined together to create the virtual keyboard, which will be available as a free app for Android-based devices.
"According to the research team 'two-thumb typing is ergonomically very different' from typing on physical Qwerty keyboards, which were developed for typewriters in the late 19th Century.
"They claim normal users using a Qwerty keyboard on a touchscreen device were limited to typing at a rate of about 20 words per minute. This is much slower than the rate for normal physical keyboards on computers ...
"With the help of an error correction algorithm, trained users were able to reach 37 words per minute, researchers said. Dr Kristensson, lecturer in human computer interaction in the School of Computer Science at the University of St Andrews, said: 'We believe KALQ provides a large enough performance improvement to incentivise users to switch and benefit from faster and more comfortable typing.'"
Any new system developed by someone who uses the word "incentivise" is doomed before it even gets off the blocks, mark my words.
The developers will present their work at the Conference on Human Factors in Computing Systems in Paris on Wednesday of this week (May 1).
Among 271 comments on the BBC website as of last night were these: "We already have two keyboard layouts, QWERTY for touch typing and the alphabetical layout of most number pads. Though this might help one-finger typists type faster on mobile devices, for touch typists like myself who use more than just two digits it's totally useless."
"I hope manufacturers will configure the OS to provide both and allow the users to flip between the two as required. Then we will see if it has a future."
"After using QWERTY for many years, and converting to Mac, finding the keyboard is just different enough to really screw up productivity (plus having XL 'man thumbs' anyway), not sure I'd want to adapt again."
"I have never seen a single person typing on a smartphone's screen in that manner ever! No one I know has used their thumbs to type since old school phones with number pads! It's all index fingers now!"
A PDF of the research is here.
A Max Planck Institute information sheet titled "Improving Two-Thumb Text Entry on Touchscreen Devices" is here.
A video is here.
Of the QWERTY challengers listed below, from Wilf Beeching's Century of the Typewriter, the closest to KALQ is the Fitch of 1886.
Let's remind ourselves that KALQ is way, way behind the eightball here. The reason is simple. People use QWERTY. Have done for 140 years, almost six generations. That's what they use on computer keyboards. The most serious challenge yet to QWERTY came from Dvorak, and at the end of the day Dvorak was abandoned because it it took too long to retain people who had being using QWERTY. That meant everybody. If you can erase the collective memory of six generations across the English-speaking world, you've got a chance. Otherwise, forget it. 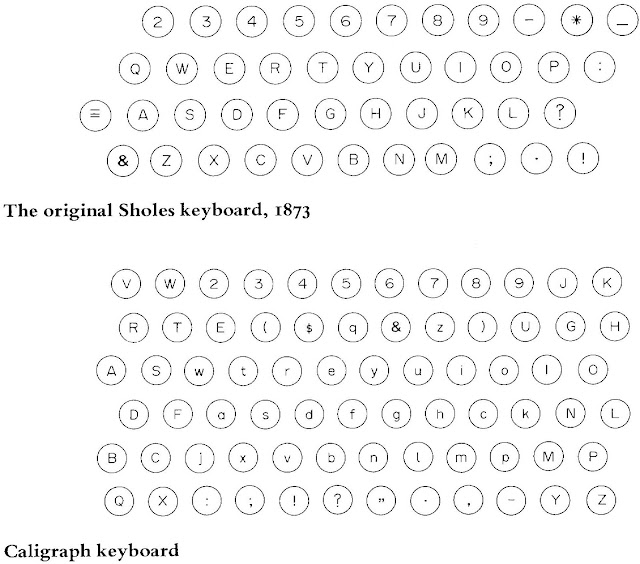 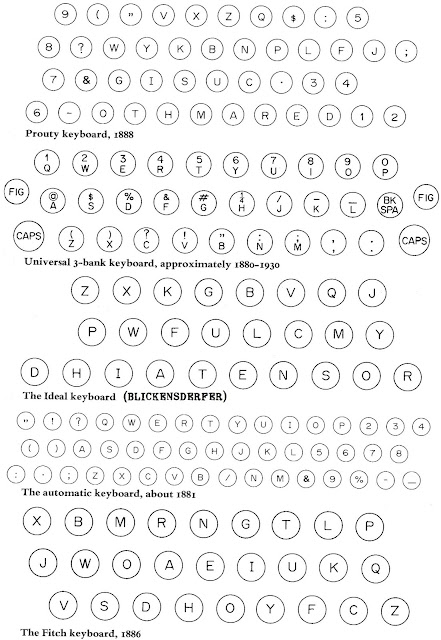 I'm not giving up my QWERTY keyboard. They can pry it out of my cold, dead hands

I hadn't known of all those different keyboards. I'll stick to my qwerty. Besides unless the keyboard police sneak into my house and totally rebuild all my typewriters QWERTY will live on another century or two.

I do not own a tablet PC so I fail to realize how the kalq config is any faster.
I'd think they would want the most used vowels and consonants nearest one's thumbs. DALQ does not appear to do that.

I'm with you, let's continue the legacy of Chris Sholes. Actually, it will continue itself through the beauty of inertia.

Another interface I don't like is voice. Voice recognition is still pretty rotten, and I'd rather "speak" with my hands when interacting with a machine.

In a broader context, this is a cool article, if you think about it. With the advent of smartphones and tablets, typing was becoming an obsolete ability, precisely because you could only type on those devices using the thumbs. But, when you consider the newer devices as a new method to produce and exchange text, that immediately makes them heirs to the long tradition of our typewriters. It's only fitting that the most defining feature of a typewriter - the keyboard - is still considered important enough in this digital age to see new attempts at updating it and bringing it to the XXI century.

I learned to use the FITALY keyboard when I was using my Palm-based PDA. It was designed for single stylus entry, and is very efficient. I'd like to see it on cell phones and tablets.