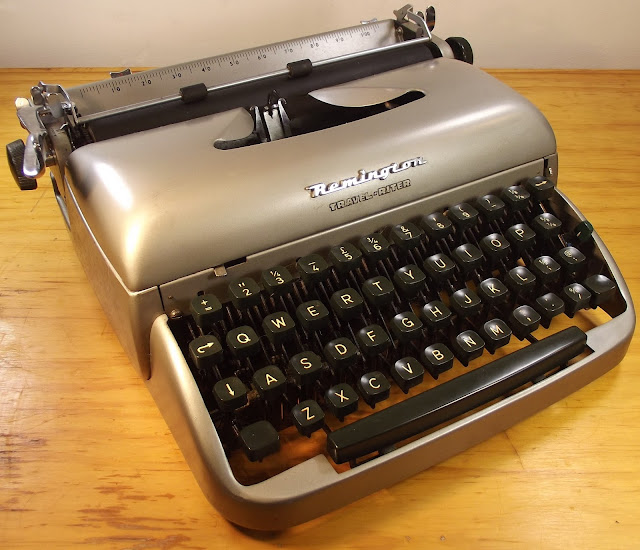 After typecasting with my Remington Travel-Riter portable typewriter this morning, I was reminded of what had at first attracted my attention to this machine, when it was listed on Australian eBay in late March. At an initial, quick glance, it looked for all the world like a Dutch-made Royal Diana, and I had never seen a Remington so alike a Royal. 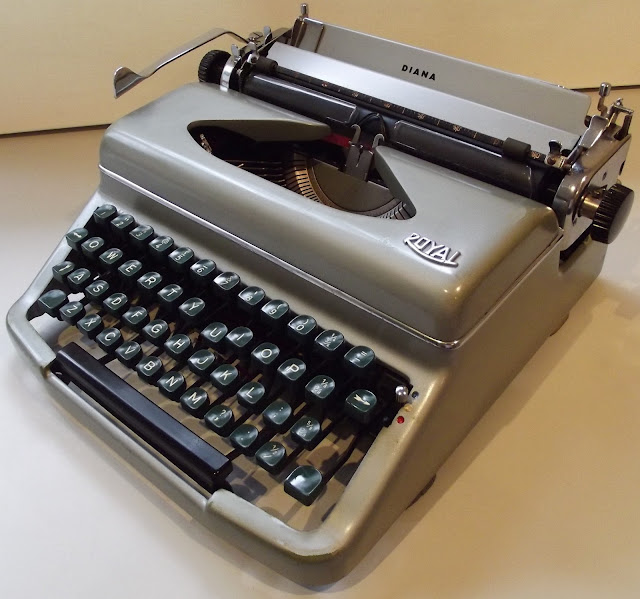 My Royal Diana. Please excuse my drooping "U" key
At the time the Remington was listed, I did check Will Davis' The Portable Typewriter Reference Site and saw that Will had written, "In the middle 1950s, Remington's subsidiary company, Remington Rand Holland BV, began production of the small Travel-Riter, seen at left." 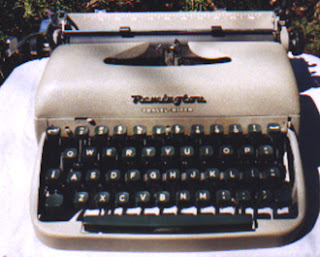 The Travel-Riter shown on Will Davis' website
Will went on, "This machine was Remington's competitor in the field of small portables.  It had carriage shift, and could most closely be compared with the (basket-shifted) Royal Diana, as far as offerings from US manufacturers are concerned.  This machine used a similar styling to the US-made units but was much smaller." 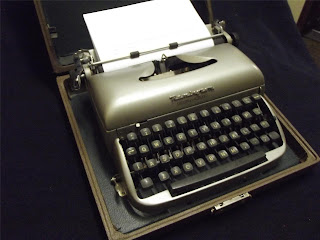 My Travel-Riter, as I first saw it on eBay
When I received my Remington Travel-Riter, I realised just how accurate Will's comments are - except for one very significant thing: My Travel-Riter is basket-shifted.
If I had gone back and checked Will's website again, and then done the research I subsequently did on Remington-Rand in Holland, I wouldn't have written what I did about my machine's country of origin in my typecast. It now seems highly likely my Travel-Riter was indeed made in Holland. 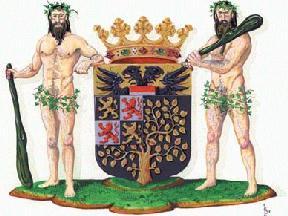 Clubbers: The striking coat-of-arms for Den Bosch
I had not previously seen any conclusive evidence that Remington was making typewriters in Holland at the same time as it had a factory on Woodside Crescent at the Hillington Industrial Estate in Glasgow in Scotland. (Remington began typewriter production in Scotland in 1949.) However, intensive digging today unearthed a Remington factory built in 1951 at 56 Onderwijs Boulevard in the historic fortified city of Den Bosch ("The Forest", also known as ‘s-Hertogenbosch), south-east of Rotterdam; Leiden, where Royal made its typewriters, is to the north of Rotterdam and south of Amsterdam. 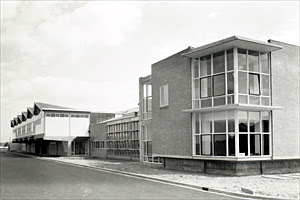 The Maaskant-Herwijnen-designed Remington-Rand BV factory in Den Bosch
On October 12, 1950, Den Bosch mayor Loeff announced to his municipal council that Remington wanted to manufacture typewriters in the town. The council agreed to build a factory, which Remington would rent.  On July 30, 1951, eight-year-old Ingrid Meerwijk (the daughter of a Remington director) and four-year-old Dirck Loeff (son of the mayor) laid the foundation stone. In 1952 Remington started with 80 staff who made 70 typewriters in a week.  At the end of the 1950s, 800 workers produced 2100 machines a week.  In the 1960s, 1000 people made 1000 typewriters a day, of which 98 per cent were exported. Just as production reached 1600 a day, on August 19, 1971, Remington announced it was scaling back the production of portable typewriters and concentrating more on its factory in Naples, Italy (production had ended in Scotland on February 22, 1963).  In May 1981, the Den Bosche factory was declared bankrupt. 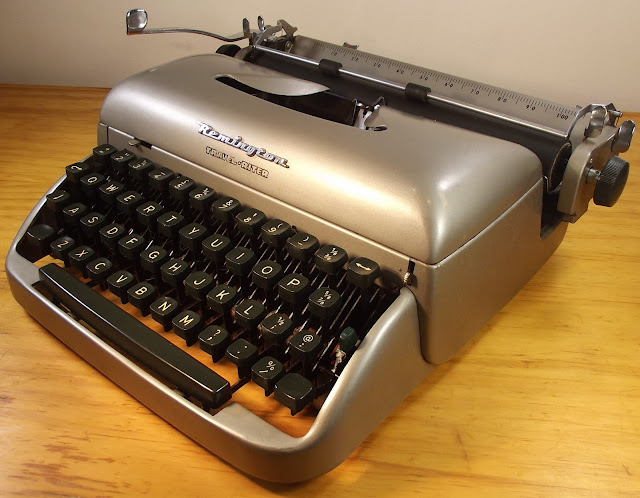 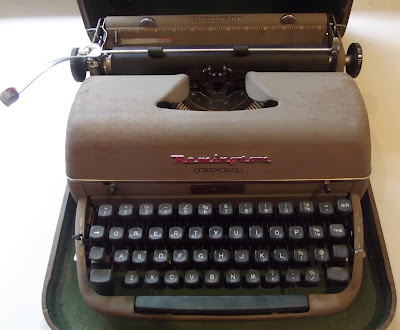 Will Davis refers to this model as representative of the "All New Remington Portable" which emerged in 1949. The example above is the British-made Quiet-Riter which is so common in Australia.
What differentiates my Travel-Riter from the Remingtons (described as the "All New Remington Portable Typewriter") shown in Thomas Russo's book as emerging in June 1949 are that the switches under the ribbon spools cover (which has no chrome rim) are to change ribbon direction (left) and, oddly enough, lock the carriage (right). Will Davis says, "The 'All New Remington Personal Portable' appeared at the very end of 1949, in a two-tone paint, using the body seen ... on the later and much more common Quiet-Riter.  Later, other variants in this body were added, such as the Letter-Riter.  This basket-shifted machine has a distinctive shape which most collectors will immediately recognise as the '1950s Remington look'." In this country, these models are very common, as they were made in Britain. 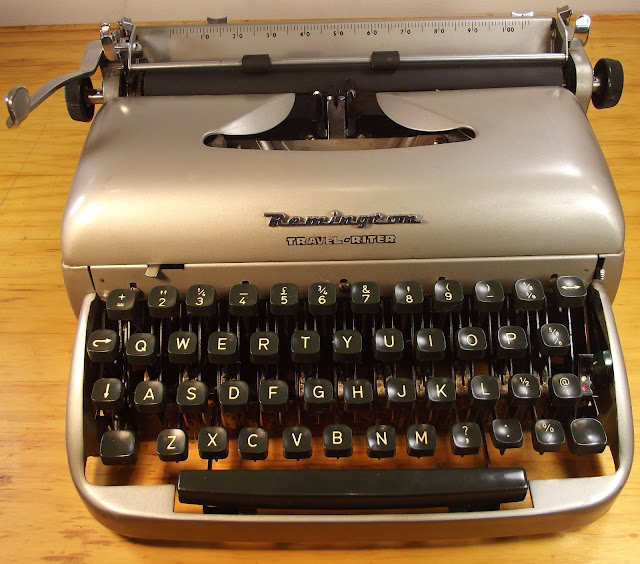 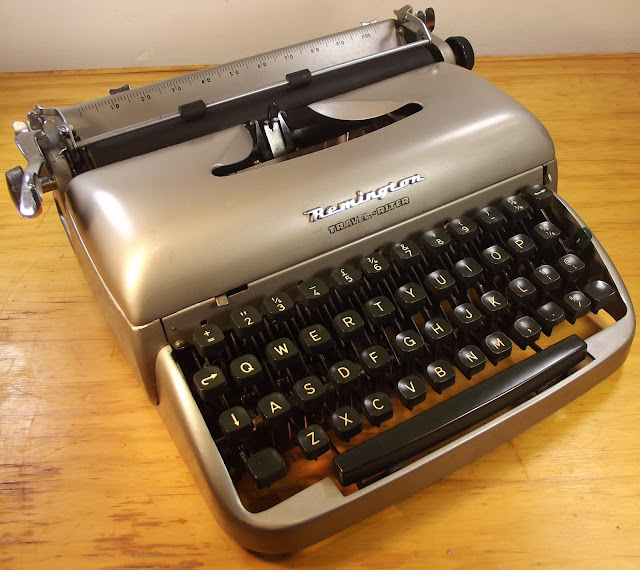 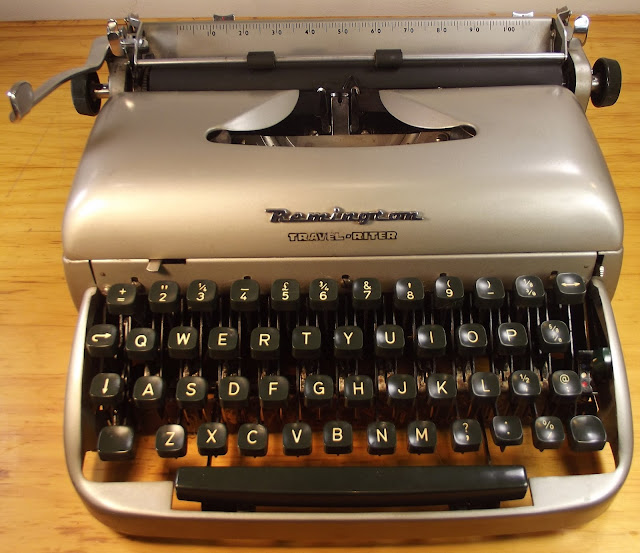 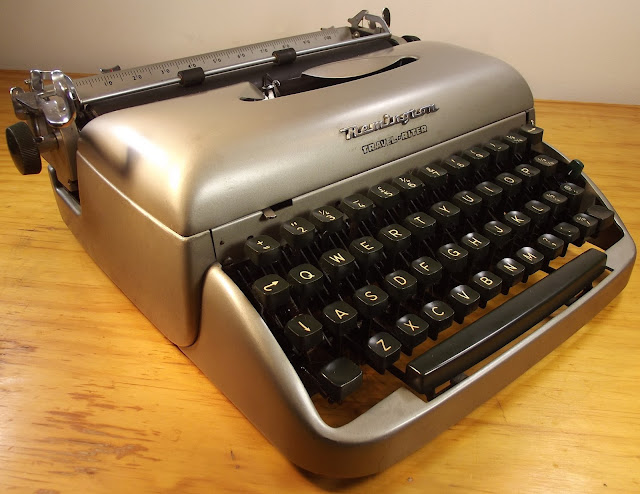 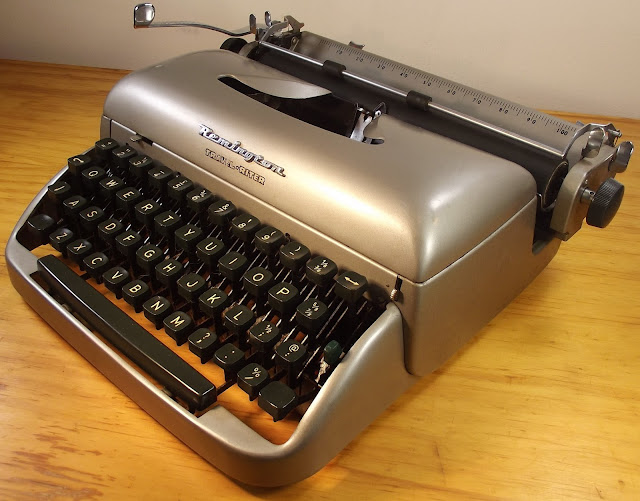 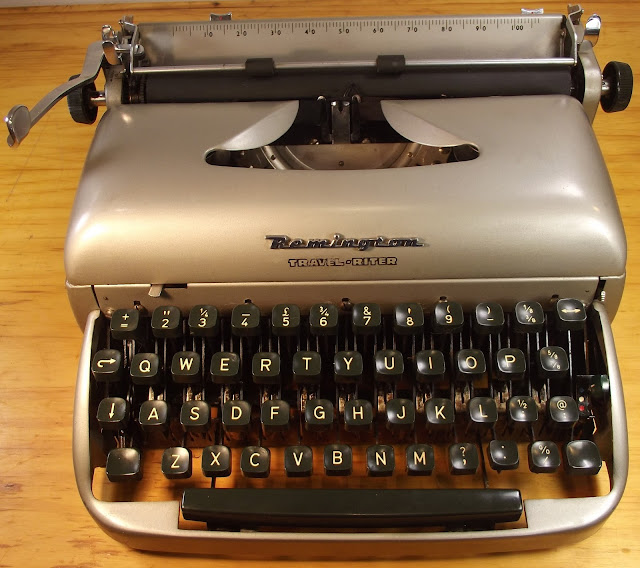 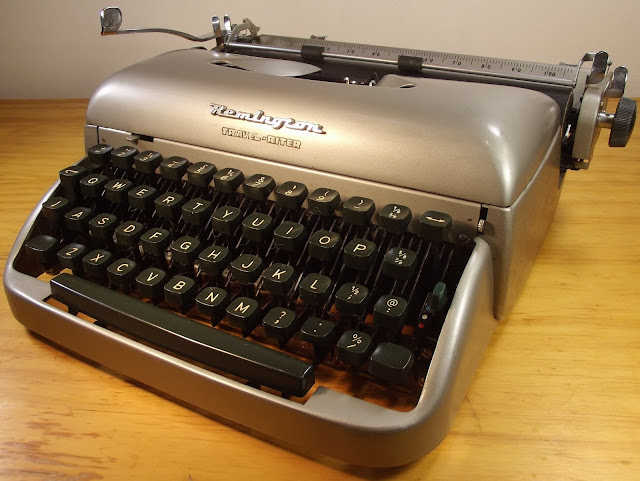 Posted by Robert Messenger at 13:01

I'm feeling like taking my Letter Riter out of the closet and use it right now!

I like my little Travel-Riter too (also basket shifted, of course).

I have a basket shift Travel-Riter in my collection and its a great little machine. I love all my 1950s Remington portables they are quality machines. Thank You

I just acquired a Remington Travel-Riter, also made in Holland. Mine has a slightly different set of symbols paired with the numerals, but otherwise, it seems to be the same model as yours. And your description of the machine's functioning describes mine to a T. I shall greatly enjoy o we ning this portable.

I have almost the exact same machine! It too works well; almost no wear and great mechanical functioning. The platen needs some attention, I believe, as it is so hard that the O's, o's and 0's cut out circles on the page!

This is the machine that Michael Caine uses as the reporter in The Quiet American.

I just found one of these on eBay (U.S.) at a spectacular price. Bought it after reading your review. Mine looks different, though. Wish I could post a photo.

Mine has the Travel-Riter logo behind the carriage.

I bought one for $8 at an antique store. Shift is gummy even after intensively oiling the relevant joints, but it quickly became my good typewriter. It's decently portable and has good type. I find the touch superior to my old Smith-Corona Courier from the 70's. Now, mine is basket shifted, but to me, it looks more like the carriage shifted one in the picture. Are the two models identical as far as the front half or so of the machine goes?