Orel Typewriter: A Rarity Or Not? 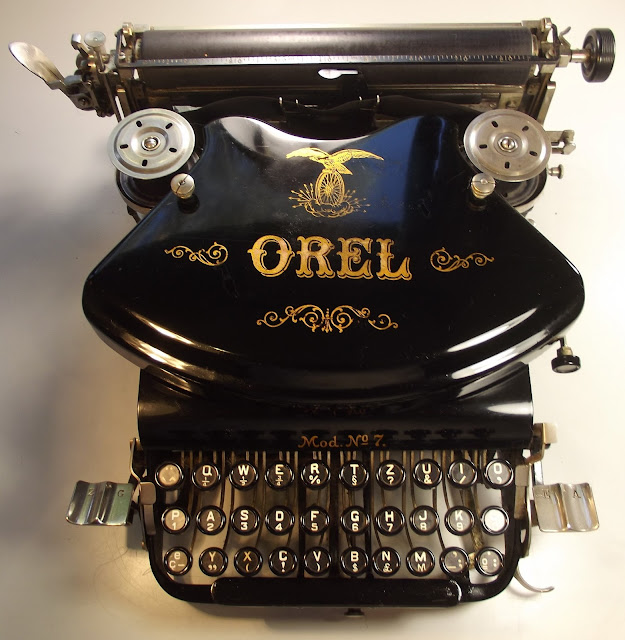 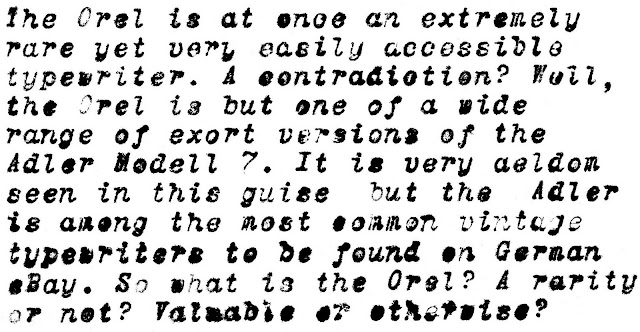 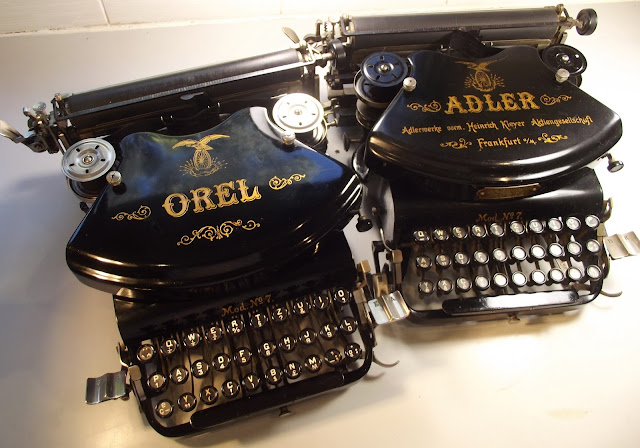 I mentioned in my post yesterday that European migrants brought with them typewriters when in the early 1900s they started to settle the area around what is today known as the Australian Capital Territory. Here is the story of one such typewriter, and how I came to acquire it:
Last year my son Danny's friend Emily Hansen came upstairs and told me one of her workmates had texted her:
"Tell your typewriter collecting friend that there is an Orel typewriter in the antiques shop at Bungendore."
"I wonder if he has spelt that right?" I asked Emily. "I've never heard of an Orel typewriter". Emily showed me the text. "Orel" is what it definitely said. I checked the Internet for "Orel+typewriter" and nothing came up. "He must have read the name wrongly," I declared. "He's made a mistake."
Once bitten, twice shy. In August 2011 a contact emailed and assured me a friend of his wanted to give me her French-made typewriter called a "Jium". I rushed to the woman's house and as soon as I spotted the case I knew it was a Nakajima. It was a Majitouch Mark IV. So much for it being a French typewriter called a Jium!
Still, I was intrigued by the Orel. So eventually I drove out to Bungendore, a tiny village about 24 miles from Canberra on the road to the New South Wales South Coast.
Sure enough, there it was, still in the antiques store - an Orel. Clearly a re-labelled Adler Modell No 7.
With that clue, I went on another Internet search. Finally I found (by keying in "Orel+Adler+schreibmaschinen") an excellent and very informative German-language website which contains a list of names of export versions of the Modell No 7; among them was the Orel. (Other variations were said to be Eagle, Aigle, Aquila, Aguila, Aguia, Opejtb [?], Orn and Vultur!) Subsequent checks of Leonhard Dingwerth's books revealed mentions of Orel as an Adler brand name (although Orel does not seem to be Ernst Martin's book).
The Adler Modell No 7 is, of course, the German version of the Wellington Parker Kidder-designed Wellington thrust-action typewriter (aka the Empire), first made on the Continent at the  end of the 19th century.
At the height of my much-vaunted "Green Day" last November, and overwhelmed by my good fortune in backing the winner of the Melbourne Cup and simultaneously acquiring a Hammond Multiplex and a Corona Standard Streamliner, I drove back to Bungendore and picked up the Orel. I promised to post on it then, six months ago, so here at last it is: 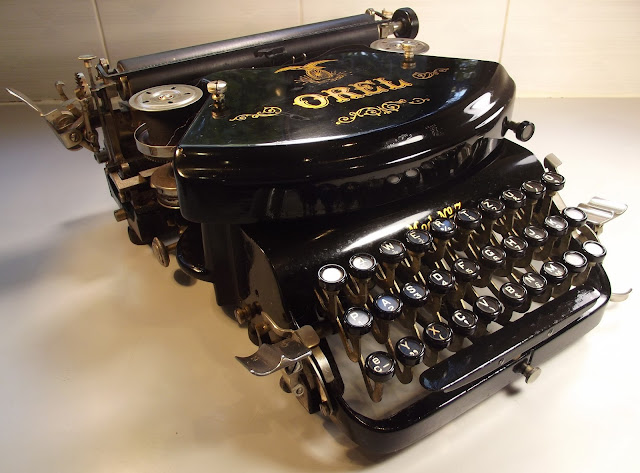 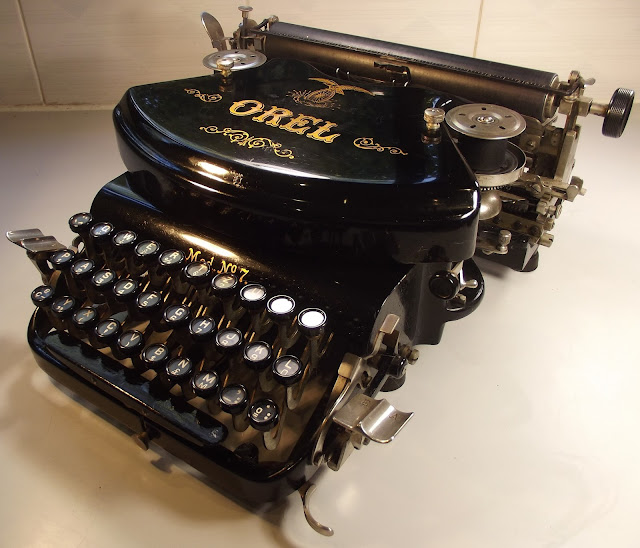 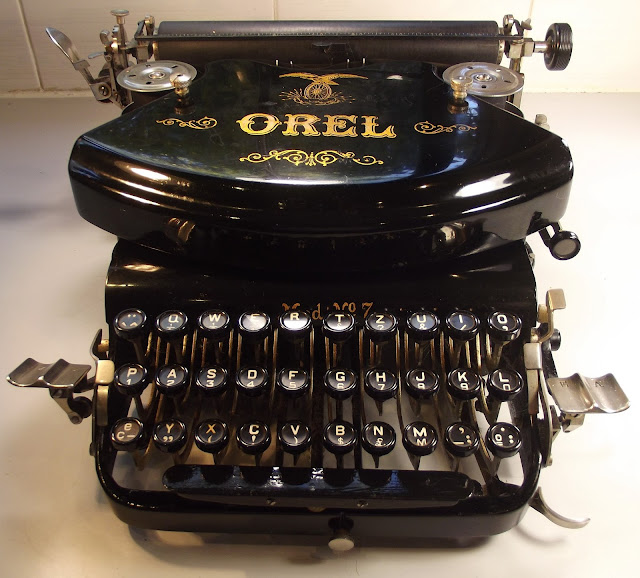 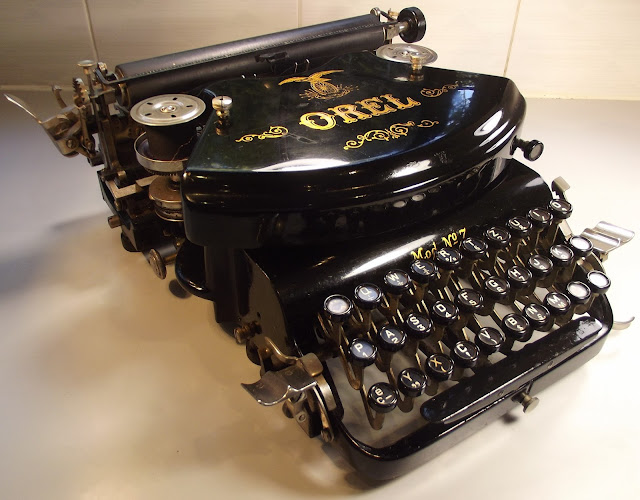 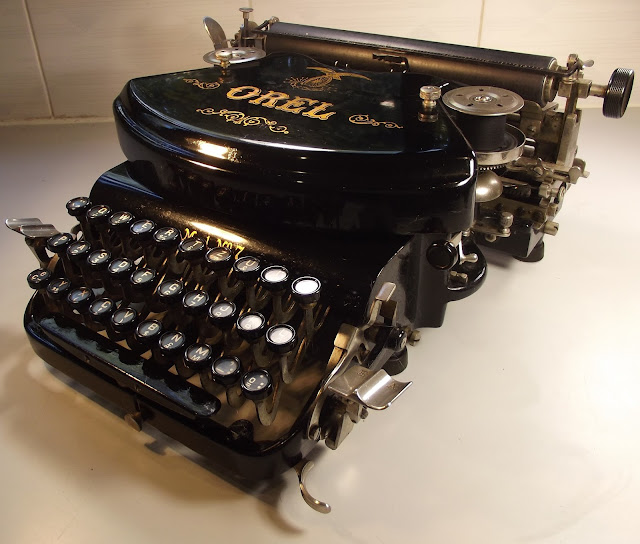 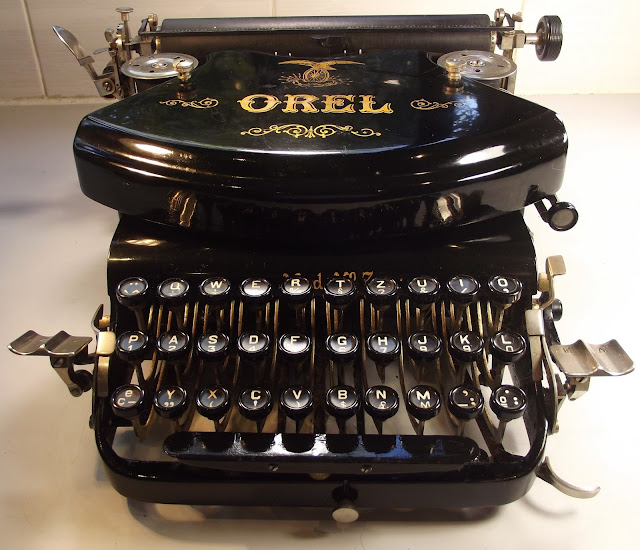 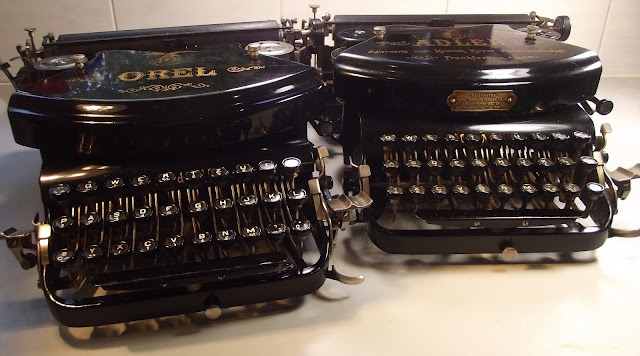 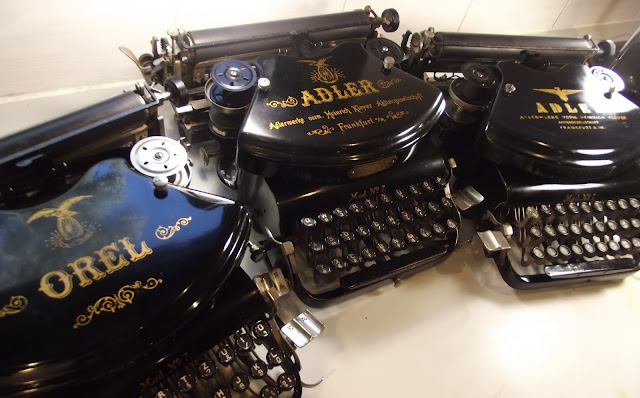 The question remains, however: An Adler Modell No 7 is a very common typewriter. Does the fact that it has been re-labelled an Orel make the Orel a rarity? And as such valuable? On the scale of rarities (and desirables among typewriters, does a simple name change, a mere variation on a common theme, count? I doubt it. What do you think?
PS: I meant to mention that I spotted an Orel in a photo taken at one of the typewriter events Florian attended in Switzerland and which he included in one of his much-missed posts. It's the only other Orel I have seen in captivity.
Posted by Robert Messenger at 11:45

Hi Rob,
I owned an "Arco" last year which I later sold on as it was not quite complete but did work....

Added Orel and other Marques of Adler to the Typewriter Database, and linked to this article on the new Orel page.

WOW. That machine looks just gorgeous (as does your Adler). Such a nice Orel can't be common!

"Orel" is Czech for eagle (Adler in German), but it doesn't look like yours has a Czech keyboard.

Opejtb looks like Cyrillic to me, or semi-Cyrillic. The beginning of the word would be pronounced "Ore."

Great looking typewriters! That OREL is really neat. Like other collectors, I enjoy reading about the different name variants. And the decals are fantastic!

Funny, if I would've read that question a couple of months ago I would've thought the same. But strolling Dutch Ebay regularly nowaways, I've see multiple Orel's. I didn't knew it was Czech for eagle though.