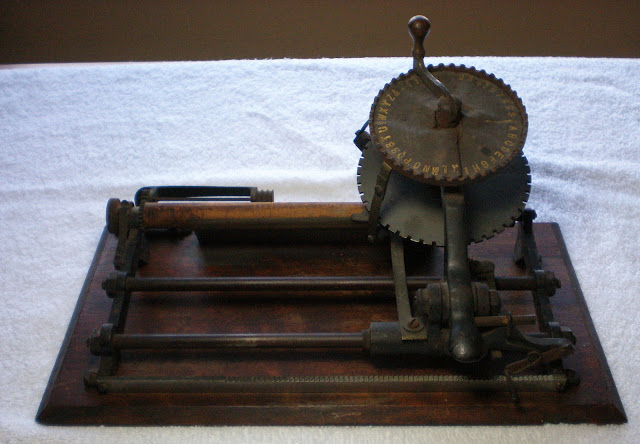 The listing, at the starting price of a mere $9.99, of an 1884 McLoughlin Brothers typewriter on US eBay last week caused quite a stir. Not surprisingly, with the auction due to end tomorrow, there has been a flurry of 13 bids and the price has rocketed up to $US2025 ($A1951). 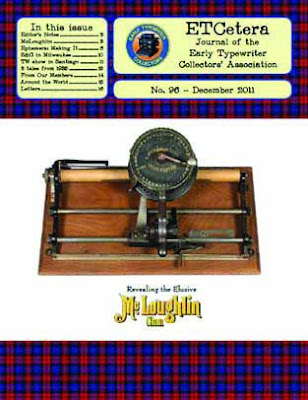 The McLoughlin, the subject of a lead article by Canadian typewriter collector Martin Howard in the December 2011 issue of ETCetera (No 96), is an intriguing machine. As far as I can tell, there was no known patent for it, but my research strongly indicates that it was almost certainly designed for the McLoughlins by the famous printing machine inventor Andrew Campbell. It has all the hallmarks of Campbell's work. 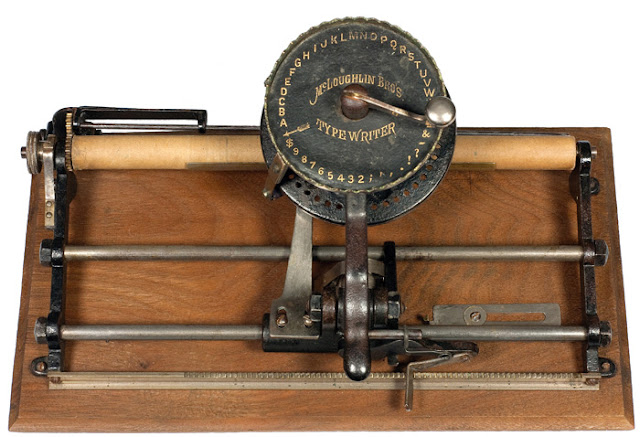 Martin Howard Collection
The McLoughlins' pioneering colour printing of children's books and games required the very best and most advanced printing technology - and that was invented and assigned to the McLoughlins by Campbell. In the mid-1880s, Campbell assigned a large number of his printing-related inventions to the brothers.

Andrew Campbell
What has added to the intrigue of this current eBay sale is that the name of another famous inventor, Charles A. Lieb, appears on it, suggesting that this particular McLoughlin was quite probably owned by Lieb. 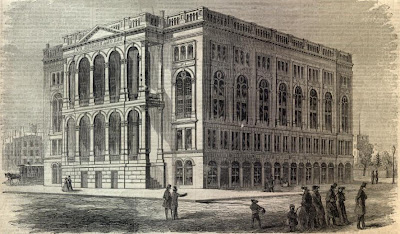 Cooper Union in the 1860s
Lieb was born in Newstead, New York, in 1856, and educated at the Cooper Union for the Advancement of Science and Art in Manhattan. In the mid- to late 1890s, Lieb made his fortune through his ownership of the Georgetown and Tenallytown Railroad Company and a Washington DC electric lighting plant. Lieb devoted the later years of his life to inventing electric vehicles, wireless telegraph machines and a screw elevator. 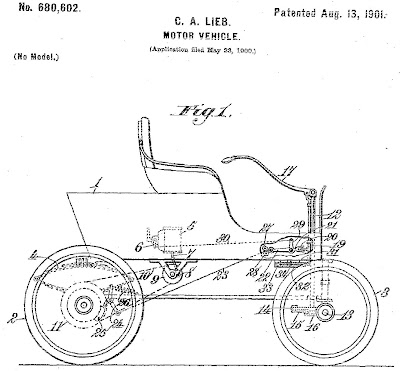 In 1899, described as a "capitalist" by The New York Times, Lieb was part of a syndicate which took over the Corliss Steam Engine Works in Providence. Later that year he took part in the first run of the Automobile Club of America, driving an electric vehicle in New York.  At various times Lieb was a mechanical engineer with the Manhattan Transit Company and a manager for Western Union. In 1900 Lieb was joined by Oberlin Smith, who had invented magnetic recording, in the development of the telephonograph. Four years later Lieb was similarly approached by Nikola Tesla about an electric auto-bus. As an "expert" mechanical engineer connected with General Electric, in 1906 Lieb became a director of the United Wireless Telegraph Company, which attempted to merge the dominant Marconi and De Forest systems. 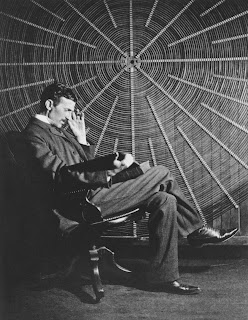 John McLoughlin
Back to the McLoughlins. John McLoughlin was born in New York City on November 29, 1827, and began his working career as a wood engraver for Elton & Co, run by his father, John McLoughlin Snr, and Robert E.Elton. In 1852, John Jnr began the publication of illustrated books and five years later was joined by his brother Edmund (1834-1889). They operated under the name McLoughlin Brothers, with a factory in Brooklyn and head office on Broadway. Through Campbell, the company was able to pioneer the systematic use of colour printing technologies for children's books. John McLoughlin died in Connecticut on April 27, 1905, aged 77. 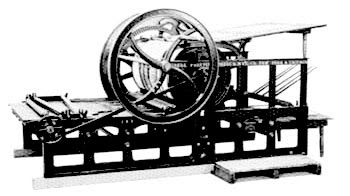 Campbell Country Cylinder Press
Finally, let's look at Andrew Campbell, who I feel certain designed the McLoughlin Brothers typewriter.  Campbell was born near Trenton, New Jersey, on June 14, 1821. In 1836 he left Trenton to become a driver on a canal. He moved to Alton, Illinois, where he constructed several labour-saving devices. In 1842 he removed to St Louis, where he built an omnibus called the Great Western, the first used in the city, carrying 48 passengers. In 1847, Campbell moved to Columbus, Missouri, where his inventive genius produced a machine for making match and pill boxes. He then devoted his attention to bridge building. He next went to New York City, where he started inventing printing presses. 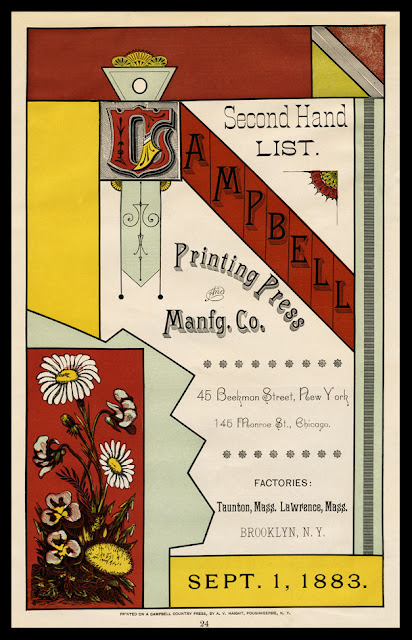 Campbell became one of the world's most important inventors and manufacturers of printing presses. He was president of the Campbell Printing Press Company of Brooklyn. He invented the press-feeding machine in 1853, and was employed by A.B. Taylor & Co of New York. He built presses for Harper & Brothers and Frank Leslie, of New York, the first ever produced with table distribution, as well as the first automatics. In 1858 he engaged in business for himself; in 1861 he built the Campbell Country Press, which became widely used throughout the country by newspaper publishers. In 1866 he created the two-revolution book press and in 1868 an art press for fine illustrations. Campbell made the first press that printed, inserted, pasted, folded and cut in one continuous operation. He held 50 patents relating to press building. In 1880 he retired from active business but continued to design machines for the McLoughlin Brothers. 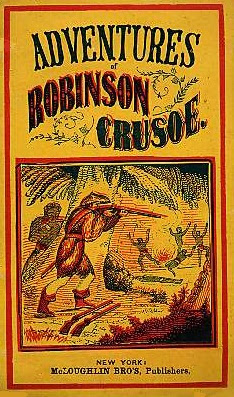 Campbell also invented various devices relating to hat manufacture, steam engineering, machinist's tools, lithographic machinery and electrical appliances.  Between 1858-89 he took out about 125 patents, including in the US, Britain, France and Belgium. His son, Andrew Chambre Campbell (1856-1926), was also a machine inventor. 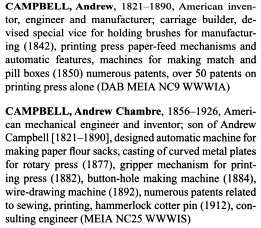 Posted by Robert Messenger at 16:06

+Rob, What a fantastic period in American history, a veritable explosion of engineering invention, the likes of Sholes, Blickensderfer, Wagner, Yost just to name a few, adding to the history of the typewriter. Such marvellous ideas, culminating into the IBM Selectric, that most brilliant invention of all.

Thanks for the insights into some of the back story behind this fascinating eBay offer. It's on my watch list! (But not affordable for me, sigh.)

Hello Robert,
I’m a descendant of Andrew Campbell of the Campbell Printing Press Co. and was very pleased to find and read this blog post. I’m working on a family history and would like to know where you found Andrew’s picture and if you have any suggestions on where else I might find information relating to Andrew’s inventions, or any additional photographs of him. He’s a pretty special man to our family, and I wish more people knew about his life and work.

I appreciate any help you can offer,
Debi