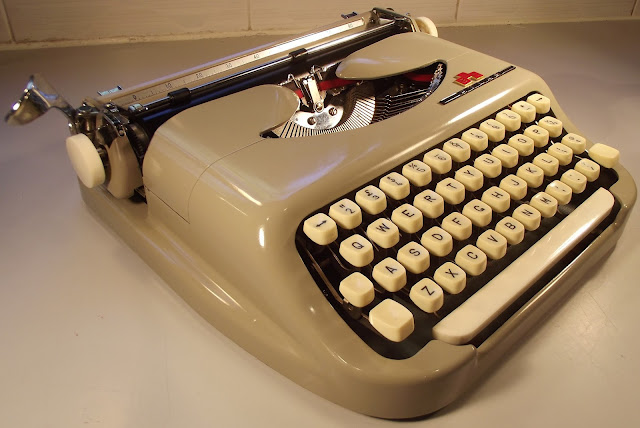 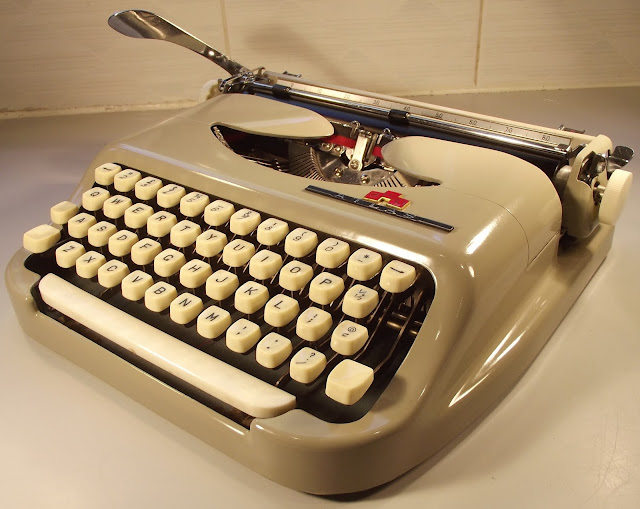 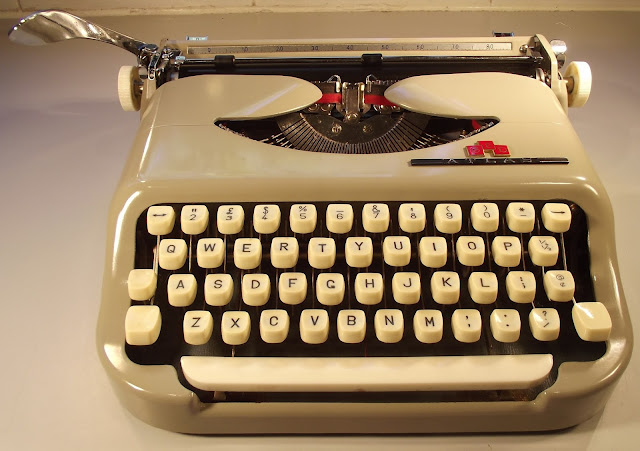 Two Atlas portable typewriters have been given to me in the past few months by Canberra women. The first (serial number 702012) belonged to the parents of the woman who gave me the crinkle green model. Her parents had bought it in Aden, then a duty-free stopover, when they made the sea voyage from England to Australia as migrants in 1962. The second Atlas (serial number 702401), a cream model, also belonged to the donor's parents and had been bought by them in Hawaii on a trip overseas at about that same time. My third Atlas, one with black gull wings, has the serial number 708978.
The Atlas portables were made by Nippo in Japan, which went on to make the P100 (aka Morse), P200 (aka Argyle P201), P300, the Baby Alpina, Condor and Rexina. 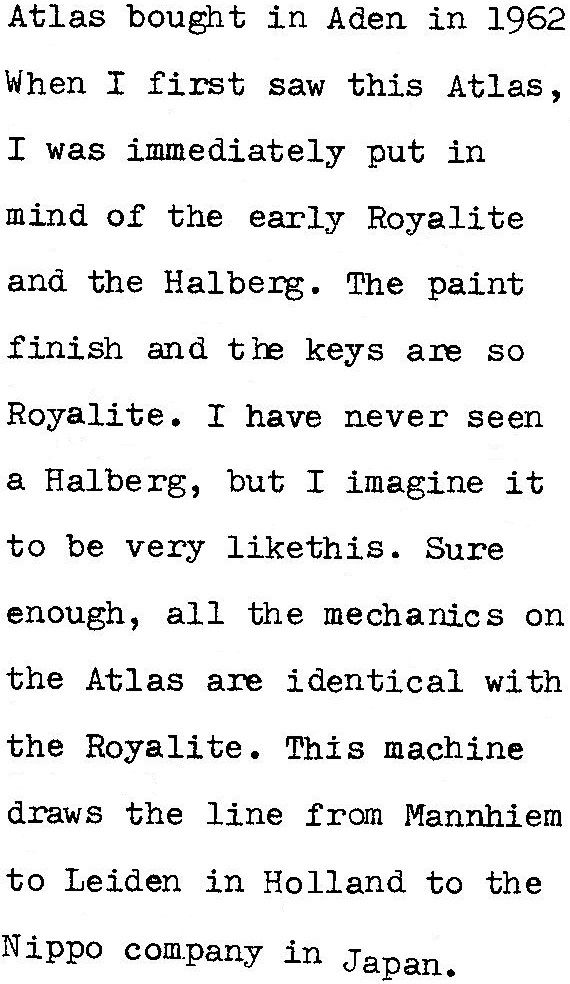 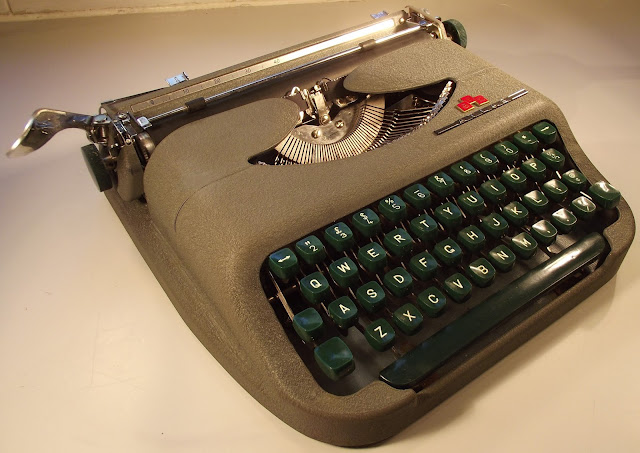 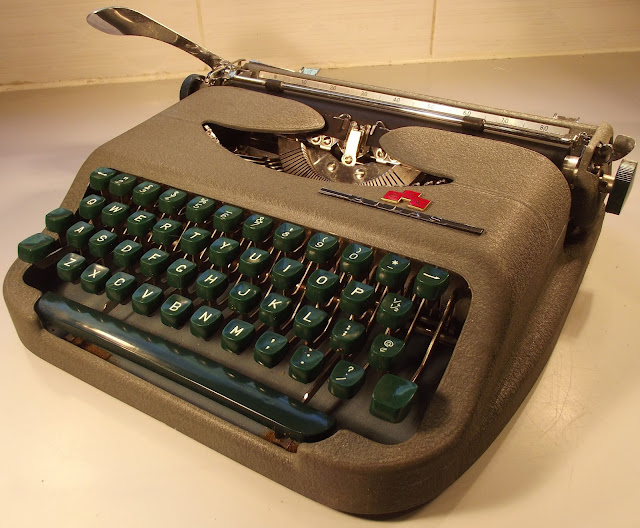 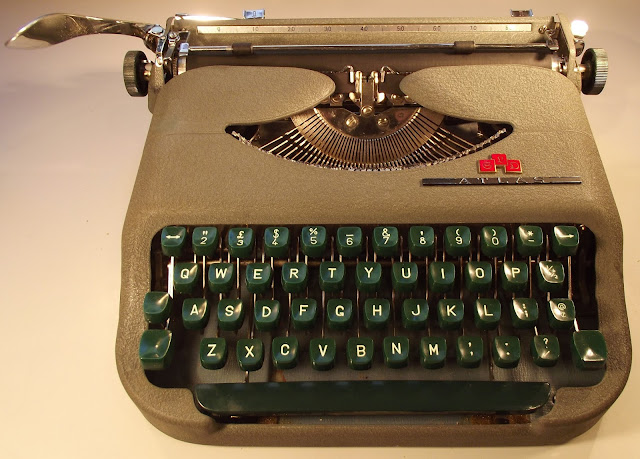 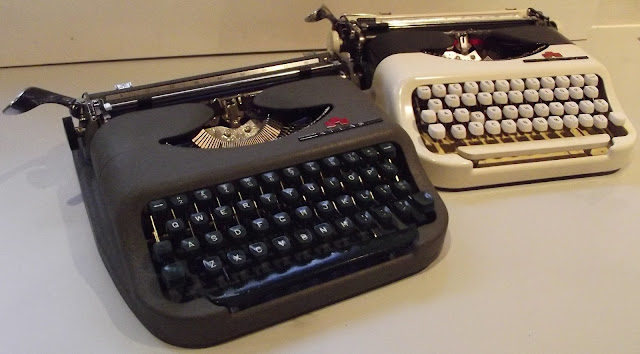 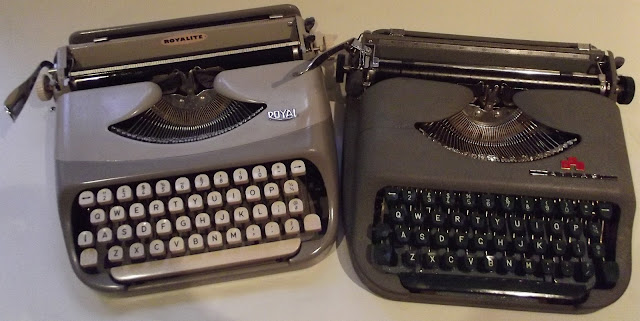 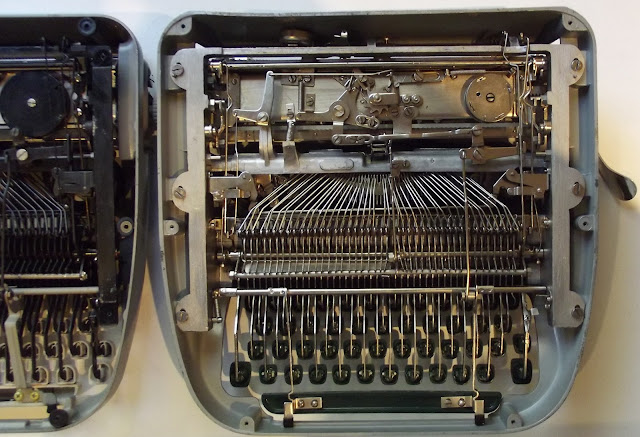 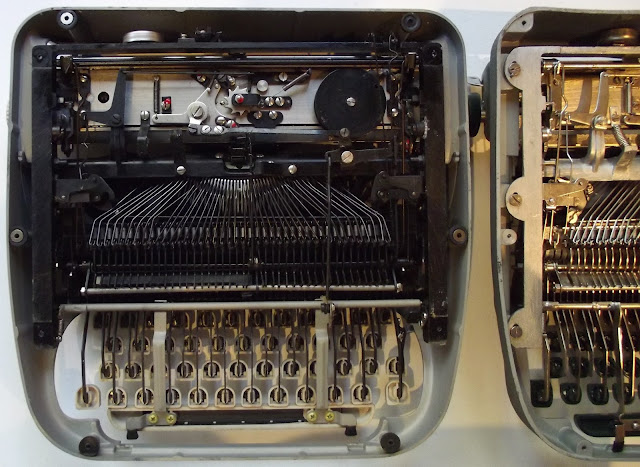 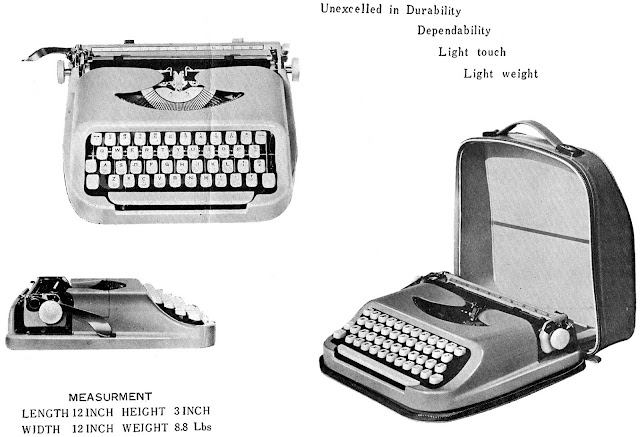 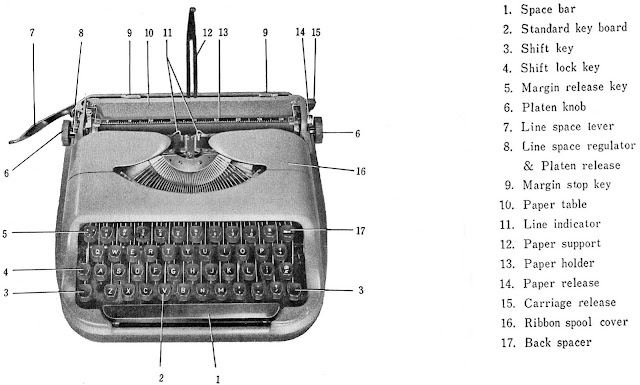 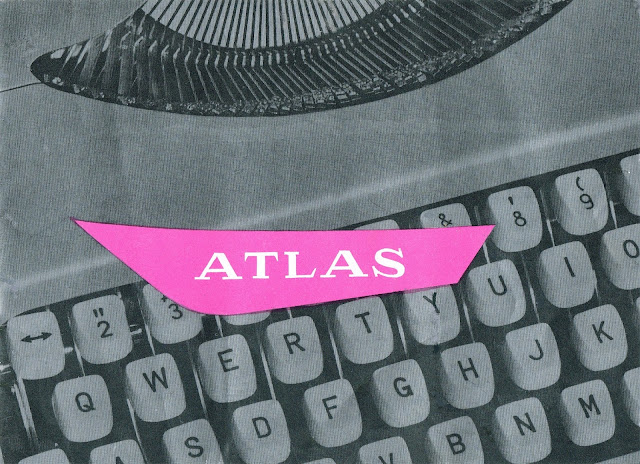 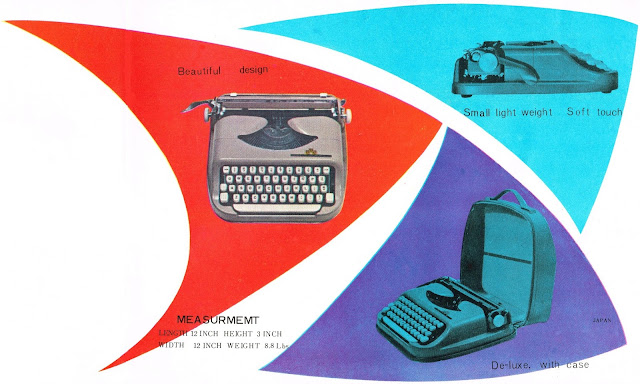 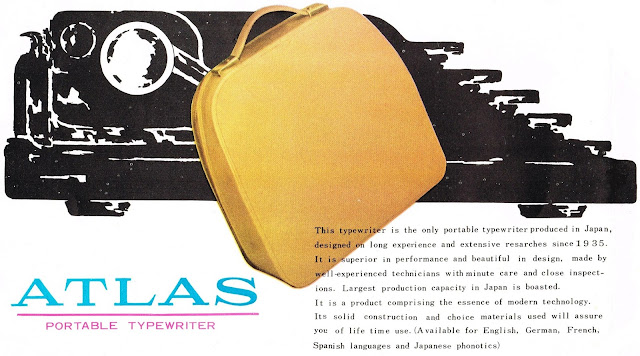 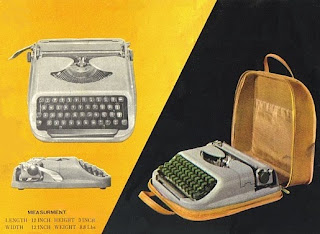 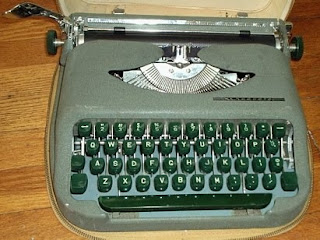 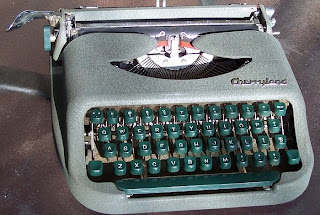 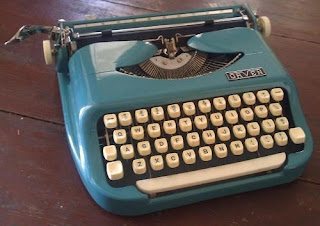 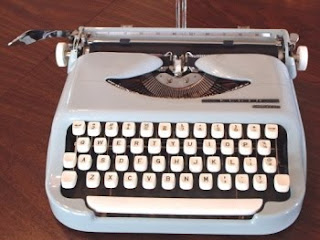 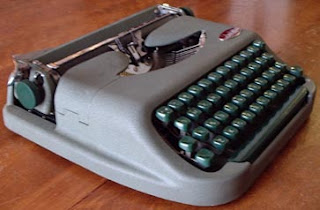 Wellon was a US-registered trade name owned by the Nippo Machine Company of Yokohama, Japan. Nippo produced Japan's first portable typewriter, in 1961, beating Brother, Nakajima and Silver-Seiko to the punch. The Nippo-designed mask with gull-wings covered mechanics which started out in the Dutch-made Halberg and then moved into the Royalite, when Royal McBee took over Halberg in 1954. Mechanically, only the line space mechanism on the Nippo changed. 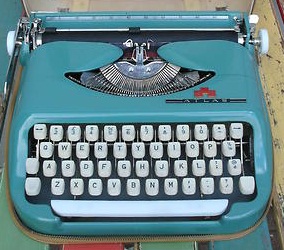 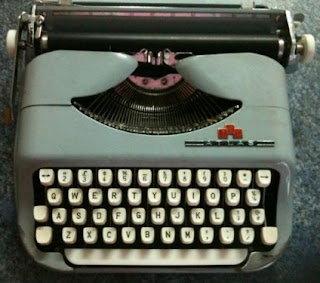 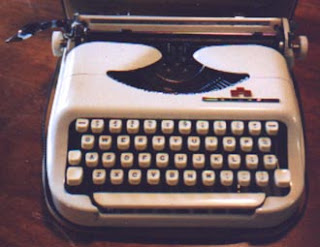 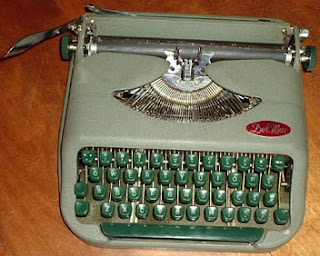 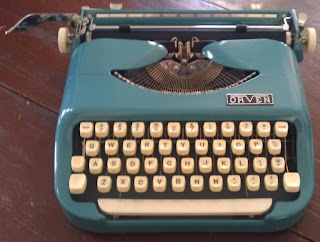 Posted by Robert Messenger at 12:37

That machine has some gorgeous curves! I love it. putting the crinkle finish on the machine certainly doesn't do it any justice. Just beautiful.

And... (albeit premature) Congratulations on your Half mil! Wow!

What an achievement! Congratulations on your first half million visits! I agree, your blog is something global, and is a source of information and a reference for us typospherians the world over. So, from Mexico, Congratulations!

Congrats on half a million! You are a phenomenon.

And that is a good-looking line of little typewriters.

Congratulations on half a million!!!

Those are some mighty fine looking typewriters. More to add to my never ending wish list.

Congratulations on passing 500,000. It is testament to the great posts your blog consistently provides.

Hi, I recently bought an Atlas S12 typewriter with script typeface. I was trying to find out more about it and Google search led me to your blog post. But my Atlas has a different logo from yours, and it says "Made in Italy" on the body, with its serial number 342787 as a sticker only. It's the same model as this ebay entry: http://www.ebay.it/itm/ATLAS-SCRIPT-FONT-CURSIVE-S12-Vintage-Typewriter-beautiful-scripture/171691179350

I checked script typefaces on the internet and my typewriter's is identical to one from an Underwood 18 (post #24 on this thread http://typewriter.boardhost.com/viewtopic.php?id=85&p=3), actually the body looks very similar to this Underwood 18.

Would you happen to know if Atlas changed its logo sometime in its history? Is my Atlas from the same company as yours? Any info would be very helpful. Thanks very much.