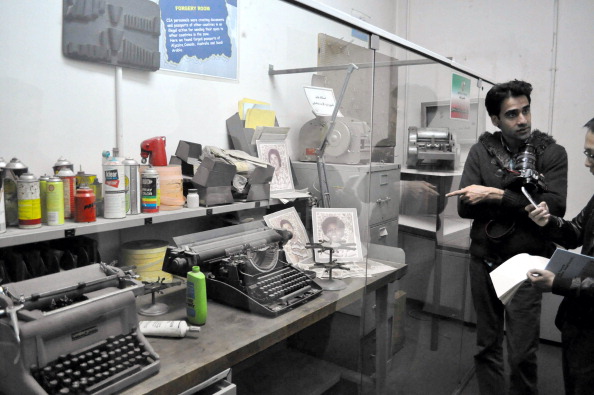 About the time Ben Affleck's movie Argo was deservedly winning three Academy Awards, Japanese national newspaper The Asahi Shimbun was checking out what had become of the real former United States Embassy in Tehran, where much of the action in Argo was set. The image above is part of what The Asahi Shimbun found. It is the so-called "Forgery Room", where CIA operatives created false documents and passports  -including passports for Australia and Canada. 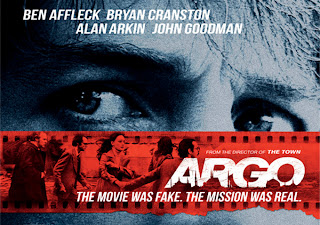 The former embassy is now a museum. It was at the centre of the hostage crisis in which 66 captives were held by Iran's revolutionary students for 444 days between 1979 to 1981.

Alan Arkin and Ben Affleck in Argo
Argo is about the "Canadian Caper", in which CIA "exfiltration specialist" Tony Mendez (Affleck) led the rescue of six US diplomats. The movie won Oscars for Best Film Editing, Best Adapted Screenplay and Best Picture. 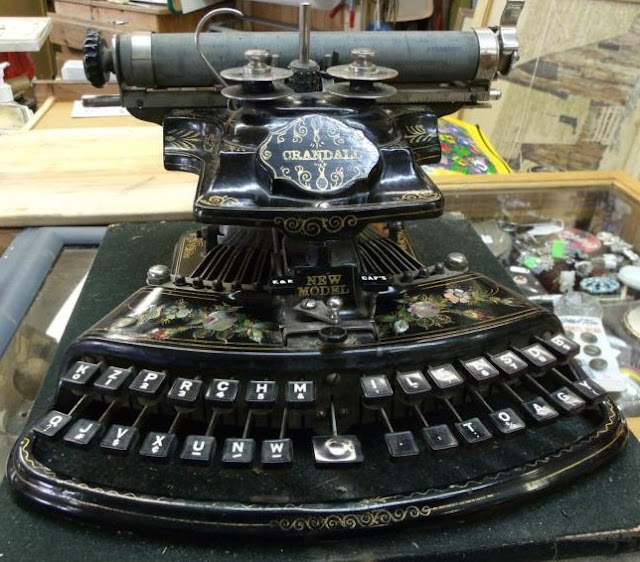 This magnificent New Model Crandall (serial number 5698) sold in Park Rapids, Minnesota, for $8300 after 21 bids. For a long time I thought I was still in the hunt, but toward the end of the eBay auction the bidding got way beyond my means.
A couple of "potential" buyers really tried it on as the bids mounted. One wrote, "First of all I would like to compliment you on your wonderful typewriter. In June this year I will open a typewriter museum which will be one of the most important in the world. The museum – in Piedmont, Italy – will house about 400 antique typewriters. I am not a dealer but your splendid typewriter would be one of the most beautiful examples on display in the museum. I hope you are able to lower the price of the typewriter as I have a very limited budget." [Why didn't I think of that?]
Another said, "I could 'buy now' for $3750, including shipping to Spain." Good try!
The seller described the Crandall as having "really fancy artwork on it, with an iridescent, mother-of-pearl kind of shimmer. All we know is that these are not ordinary typewriters, artistically or technology-wise. Check out the letter-thingy!!!  It's a cylinder with letters all around it."
"It's a shame that more of these beautiful typewriters aren't around, because they really are well-constructed machines. You can tell they were made with pride." 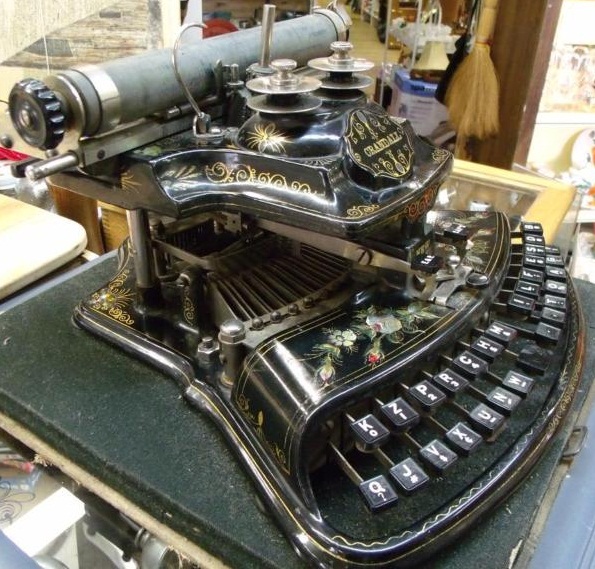 A guide to Crandall values was offered:
$1000-$2000 for a basic non-restoreable (or not worth restoring) parts machine that has parts you need.
$3000 for a mess that might be restoreable cosmetically but will probably never function mechanically.
$4000 for a conservable [sic] Crandall that can definitely be made to work. It includes some significant cosmetic restoration required, or, if not done, will hold down the future value.
$5000 for a nice machine with fairly good mother-of-pearl that has a bit of 'surface rust' here and there and either works or can be easily made to work (often hard to judge).
$6000 for a nice machine that is clean and works but is not beautiful.
$7000-$10,000 for really fine, beautiful Crandall that looks great and works great. On these, the mother-of pearl flowers and other forms (including on the back of the base) have bright colours, the pin-stripping is complete, etc.
On all, add $300- $600 for a baseboard and case and more if it has any original documentation with it. Also, provenance/history matters -add something if the original owner is known, more if she or he historically important and if what the owner used it for is known.
Apparently the Crandall had been owned by an Oscar Kastet of Rothsay, Minnesota. 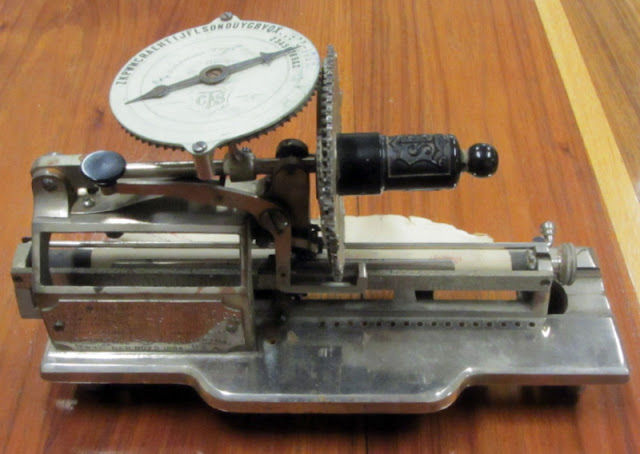 Meanwhile, in Melbourne, a Columbia No 2 index typewriter - for which the bidding started at 99c - reached $3700 after 35 bids.
KEYTOP-LESS CORONA 4 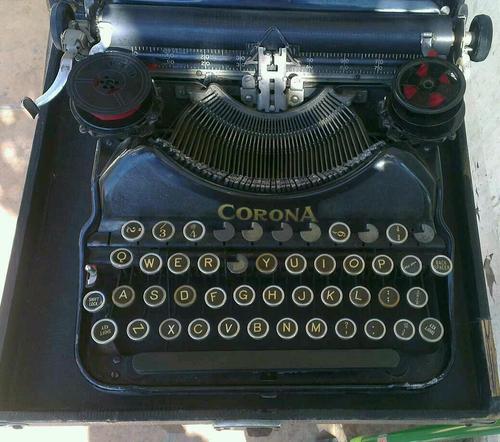 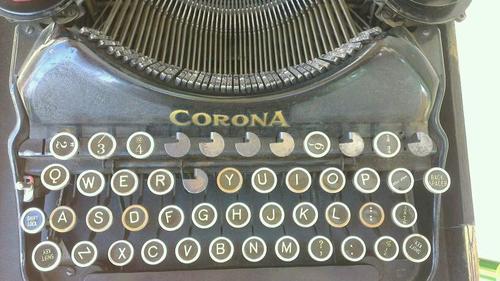 Someone sold this Corona 4 on Australia eBay for $122 after 19 bids. I wonder how the buyer felt when he or she received it and realised seven keytops were missing? Or maybe, since the evidence was pretty clear from the listing images, the idea was to spend $122 just to further vandalise this old beauty?
When the Corona first appeared on eBay, I contacted the seller suggesting it might be good idea- just in case, like - if he or she pointed out there were seven keytops missing. The reply: "It's been hiding in our ceiling for at least 20 years, only found during a clean out. Unfortunately I have no idea where these [keytops] are. The typewriter was found when we did renovations, therefore I don't know much about it, hence the low starting price."
The Corona was listed as a "Sweet vintage typewriter which would look ace in a shop display ... Keroac [sic] would be jealous." No mention of the missing keytops.
HIGH HOPES 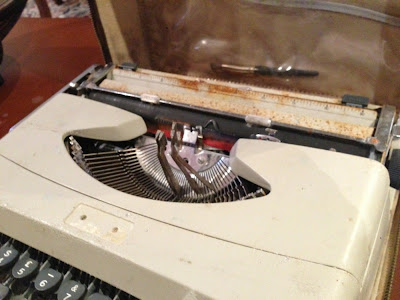 Two people actually bid on this Underwood 18. It sold for a few dollars more than the starting price of 99c. "May not work properly but has 'retro' appeal," said the seller. Rust has retro appeal? Whatever next? We should start selling rust ...
Even with "its original sticker", this Imperial didn't sell (at $9.99), surprisingly enough: 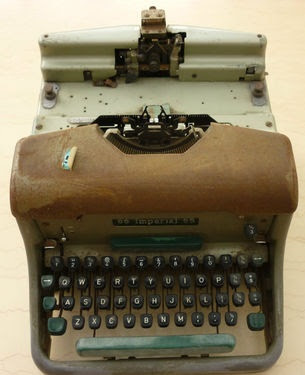 But this Underwood Champion sold for $610 after 30 bids. Things are definitely looking up Down Under: 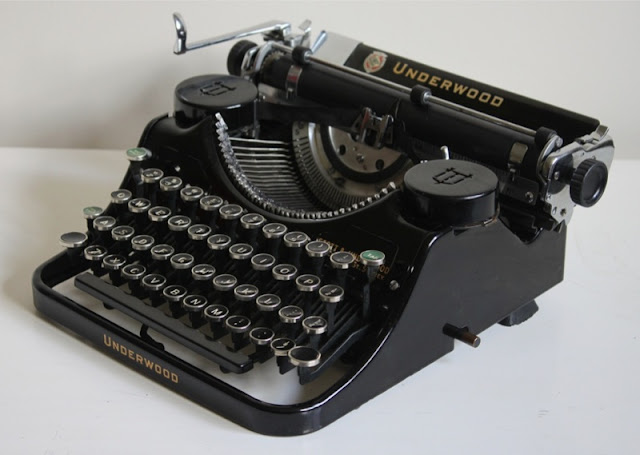 This off-white Olivetti Valentine finally sold for $700 in Germany: 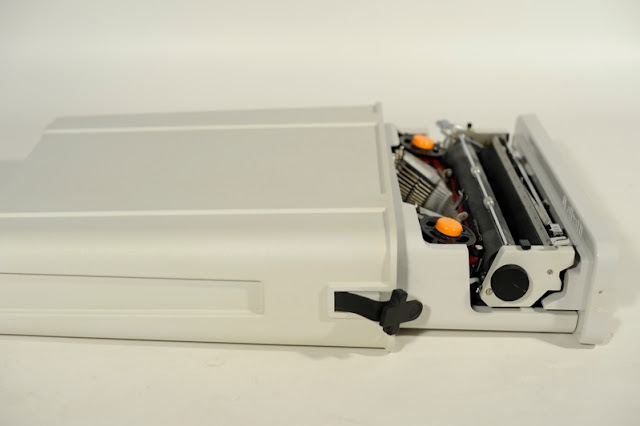 Do my eyes need re-testing, or does this Royal look green to you, too? I checked with the seller and it's a "classic Royal grey": 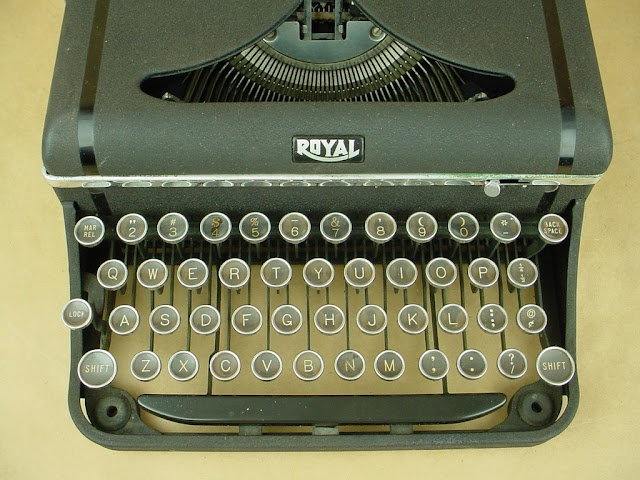 Talking of green, an Irish seller definitely needed his eyes testing, He listed this as an Imperial:: 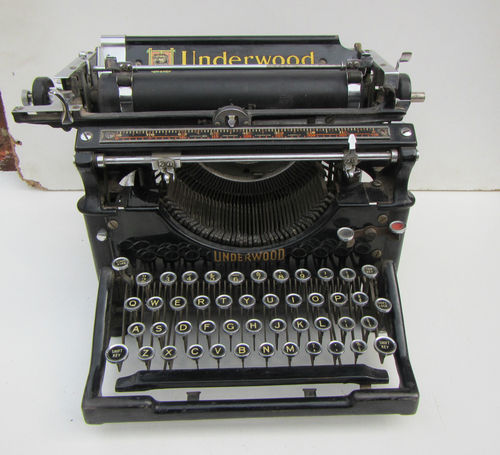 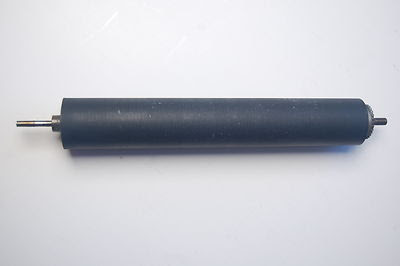 The Lonely Platen
The likely, unfortunate history of the aforementioned Corona 4 might have been similar to what seemingly happened to an Underwood Noiseless 77 in the US. Ray Nickson was concerned a new eBay trend might have been emerging when a seller, in separate auctions, listed several parts of the Noiseless - platen, carriage knobs, etc etc, everything BUT the keytops. "I will be interested to see if this fellow can sell all those parts," Ray wrote. "If the seller gets their starting price on each item, they will have made more than they would for an entire machine, I should think. It would be a worrying trend if savvy sellers could make typewriter collectors buy machines in pieces!"
HOW TO SELL A TYPEWRITER 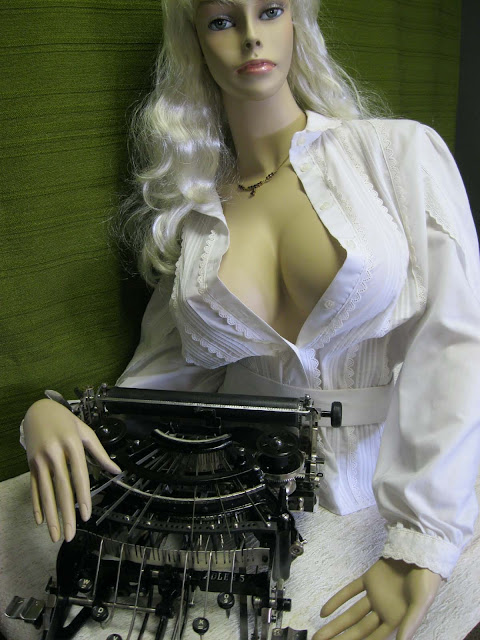 This "teaching and cut model" of an Adler 7 was listed on German eBay. Got you looking, didn't it? 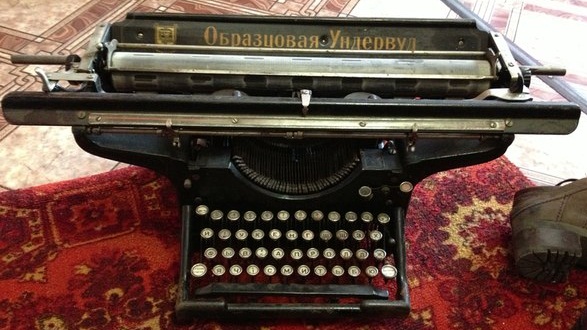 Russian typewriter enthusiasts have joined the Typosphere. Aleksandr Trofimov, 31, contacted me about using material from my blog on his, which can be seen here. "I am a Russian native who is keen on collecting typewriters. These technical masterpieces currently enjoy increasing interest in Russia, but a very limited number of fans know anything about the history of this invention. Along with my growing passion towards collecting typewriters, I have also learned how to fix and restore them, and - surprisingly enough - I discover that St Petersburg lacks professionals who are skilled at bringing such mechanical devices back to life. Typewriter owners from Russia who contact me about fixing their Underwoods or Royals etc also regret that there are no relevant workshops. As I am myself interested in typewriter history and their heyday years, I see that there is a real need to share this knowledge with my Russian co-fans and collectors."
Aleksandr says of his blog, "This is where I am attempting to tell about the history of typewriters, about celebrities who either contributed to the development of these devices or used typewriters to become famous in whatever creative areas. Also here interested collectors will find good tips on maintenance or restoration. Being a journalist myself, just like you, I aspire to make this as interesting as possible."

Aleksandr added, "Several fan webpages devoted to
typewriters have been launched in the Russian social network, namely here, yet this very one is referred generally to by only people who are interested in selling or buying typewriters."
ANOTHER DOCO? 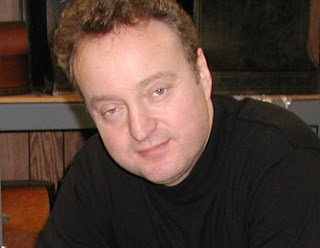 A newsletter from Martin Howard in Canada says Martin has been approached by Doug Nichol, a filmmaker from San Francisco, about presenting the history of typewriters as part of a full-length documentary on typewriters. Famous people who still use typewrites have also been interviewed, including Tom Hanks, Sam Sheppard, John Mayer and the Pulitzer Prize-winning author David McCullough. The film will be out this year."
Martin is also working on a book about the world’s first typewriters with Norman Ball, a retired professor of technology in society. Ball is an author and former archivist and curator at the Canada Museum of Science and Technology.
Martin is hoping to be able to create another public exhibit. "It has been five years since 20 of my typewriters formed an exhibit at the Royal Ontario Museum, called ‘Early Typewriters - Gateway to the Information Age’.  A nice legacy of this show is that the exhibit room at the ROM is now referred to as the ‘Typewriter Room’. William Thorsell, former CEO and general manager of the ROM, said: 'The [Howard] collection illustrates mankind’s search for a solution to a challenge, the intriguing avenues explored, the beautiful means by which they were expressed and the technical proficiency of the age. The invention of the typewriter also speaks to social change, and the explosion of communications means in the 19th and early 20th Centuries.' " 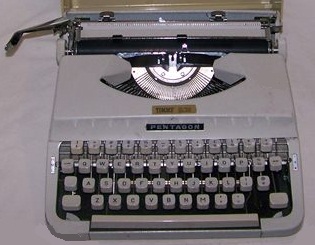 The Pentagon. It's got to be the 150th model name for a Nakajima, and still counting ...
WHAT I LOVE 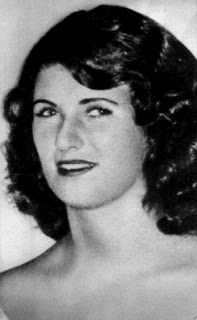 Still the same thing; Being contacted by the family of people who have, for one reason or another, been famous in the typewriter world and who have been mentioned in this blog. More on that tomorrow. In the meantime, think "Remington Heiress". Yes, I'm delighted to reveal that Gambi Benedict is alive and well. Read all about it anon. I'm so excited about this development.
Also, there is word about the founder of the Mercedes typewriter company.
WHAT I HATE
Pesky sellers who repeatedly pester you for positive feedback, with "subtle" hints like "You give me positive feedback and I'll give you positive feedback". Like, what else can they give me? Negative feedback? I don't think so.

The "other" typewriter documentary is apparently finished. It features California Typewriter Co. in Berkeley as well as Martin Howard and other material.

I want to know about Gambi Benedict today!

That Crandall is a real beauty.

And I've seen many auctions from that German seller that use the well-endowed dummy.

That Royal DOES look green.

Do you actually have a list of all the Nakajima marques you've collected? Nakajima doesn't appear to be represented at all in typewriterdatabase.com, and I would like to fix that. (:

Hi Richard, Nick and Ted. Thank you for your comments.
Ted, I don't have a list, but will give it a shot, maybe I could raise 20-30 names. Richard Amery might be able to add some. Off the top of my head, the most common are: Royal, Imperial, Adler, Pinnock, Craftamatic (also Pinnock-Craftamatic), KMart, Majitouch, Chevron and of course ALL. Pentagon makes 10 to be going on with for the time being.

Ok, I've added Nakajima ALL and the marques you've listed here:
http://typewriterdatabase.com/no_info.630.typewriter-serial-number-database
I wonder if anyone knows anything about the serial numbering and ages of Nakajimas.