"Death by Typewriter": How Dan Jenkins Dreamed of Using His Olympia to Kill His Editor 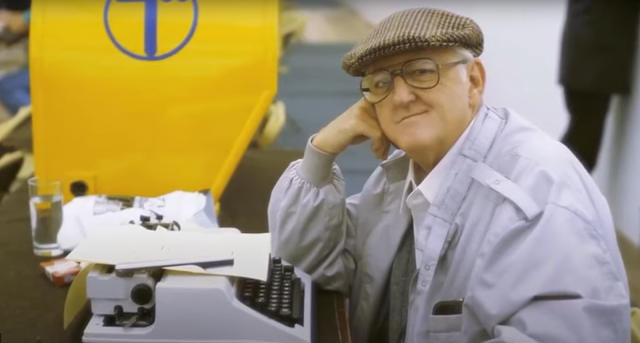 Here’s how I want the phony little conniving, no-talent, preppiewad asshole of an editor to die: I lace his decaf with Seconal and strap him down in such a way that his head is fastened to my desk and I thump him at cheery intervals with the carriage on my Olympia standard. I’m a stubborn guy who still works on a geezer-codger manual anyhow, so I write a paragraph I admire, the kind he likes to dick around with, especially if it’s my lead, then I sling the carriage at him, and whack - he gets it in the temple, sometimes the ear. Yeah, it would be slow, but death by typewriter is what the f**khead deserves. – The opening paragraph of Dan Jenkins’s novel You Gotta Play Hurt (1991) 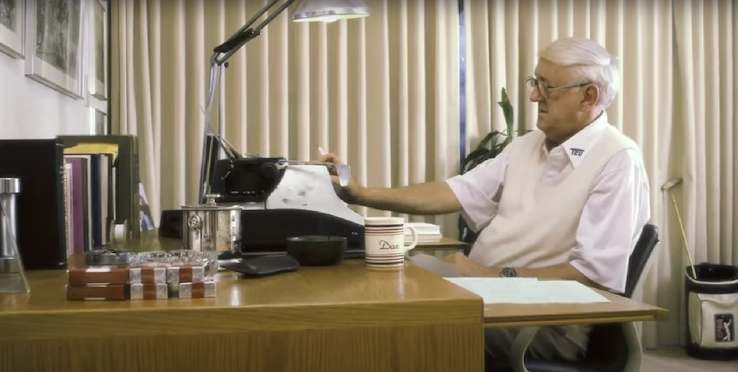 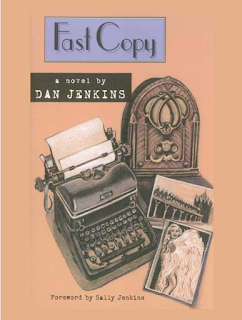 In the pantheon of America’s finest sportswriters, Dan Jenkins did not, perhaps, attain the same legendary status as Grantland Rice or Red Smith did in their lifetimes. Of those forced to cross over from manual typewriters, however, he was undoubtedly the greatest. And in Jenkins’s case, use of the word “forced” is appropriate. He hung on to his typewriters - whether they be an Olympia SM3 at home or at work or an Optima Model 105 portable on the road - for as long as he could. (At the height of his career, working for Sports Illustrated in New York in the 1960s, Jenkins used a Royal KMM, seen on the cover of his 1988 novel Fast Copy.) Jenkins’s devotion to typewriters stretched to the extent of persisting in using a manual machine when all those around him had lost their heads to the new technology. Eventually he did change to the dark side, and in the end was providing (though not typing) pithy paragraphs to Twitter. Which may go some way toward explaining why Jenkins died, in his hometown of Fort Worth, Texas, a little more than three years ago, at age 90, as a political correctness-loathing rather bitter, cantankerous old man. 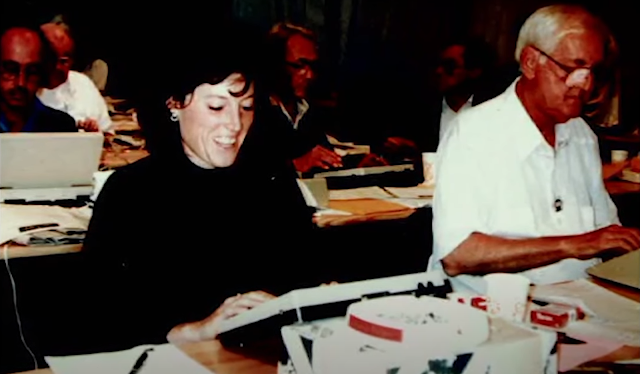 By that time I’d had long since lost touch with Jenkins’s writing, with which I’d been so deeply impressed in the mid-1960s, when I started subscribing to Sports Illustrated. Like so many other would-be sportswriters, I had told myself back then, “That’s how I want to write”. I never came close to it, of course, nor for that matter to Mr Jenkins himself. In 1970, when I was golf writer for The Australian, the national daily based in Sydney, I had a momentary flutter on being told a Sports Illustrated writer would be covering that year’s Australian tour. It turned out to be John Underwood, a very fine man indeed, but not quite Dan Jenkins. Then there were the British Opens I covered in the 1980s, though I doubt we crossed paths. Jenkins didn’t want outsiders to win majors, whereas I loved them, like the “unknown” Argentinian accountant Horacio Carbonetti, who brought Muirfield to its knees with a second round 64 in 1980. That was my kind of story – Jenkins would have hated it, knowing nothing about Carnonetti and not being bothered to eke out the Argentinian's story (which was wonderful). It was a similar situation the next year, when Jenkins opened his Sports Illustrated report by writing, “[Bill] Rogers put the British Open to sleep last weekend on the moonscape known as Sandwich down in the elegant county of Kent. In the end, all Rogers did to collect his first major championship, by four strokes, was be steadier than a relatively obscure West German by the name of Bernhard Langer.” In truth, Langer at that time was anything but obscure, relatively or otherwise. Jenkins had just never heard of him previousdly, which is an indictment in itself. 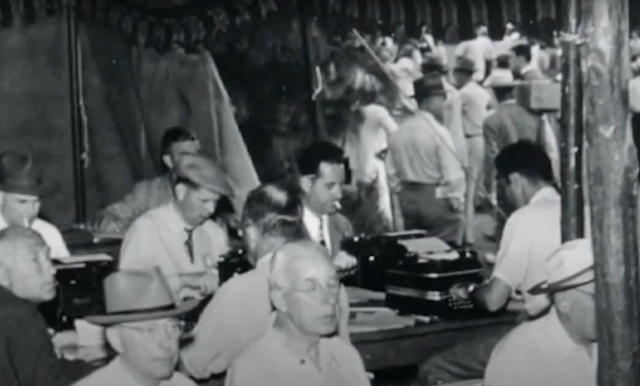 A college golf champion himself, Jenkins, with cigarette, is seen
here covering a tournament in the 1950s.
Daniel Thomas Jenkins was born in Fort Worth on December 2, 1928. In his semi-autobiographical novel You Gotta Play Hurt (1991), Jenkins wrote about the main character, sportswriter Jim Tom Pinch, finding an old Remington typewriter in the attic of his parents’ home in Fort Worth in 1938 and deciding, at the age of 10, “that I intended to be a journalist so I could wear a press card in my hatband like Clark Gable did.”Jenkins was recruited by “the Southern Damon Runyon”, the remarkable William Forrest “Blackie” Sherrod, to join the sportswriting staff of the Fort Worth Press in mid-1948, becoming its sports editor by January 1958 when Sherrod moved to Dallas. Jenkins followed Sherrod to the Dallas Times-Herald before having his dream come true when Sports Illustrated managing editor André Laguerre offered him a job in 1962. “Give me five seconds to think about it …” Jenkins told Laguerre. “Yes.” Jenkins retired in 1985 after a dispute with then managing editor, Gilbert Rogin. Jenkins’s obituary in The New York Times said he was “a sportswriter whose rollicking irreverence enlivened Sports Illustrated’s pages for nearly 25 years and animated several novels, including Semi-Tough, a send-up of the steroidal appetites, attitudes and hype in pro football that became a classic of sports literature.” The bawdy Semi-Tough (1972) has often been cited as one of the funniest sports books ever written and was placed No 7 on Sports Illustrated’s 2002 list of the best 100 sports books of all time. 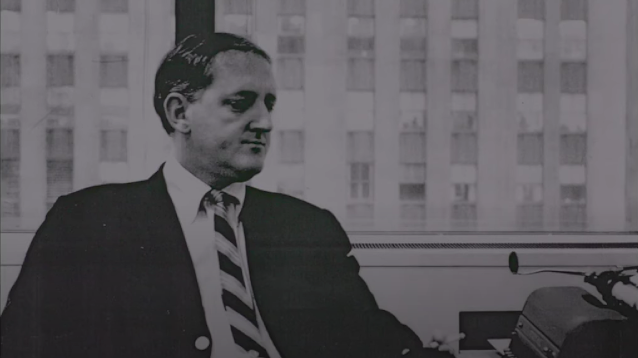 Jenkins at a Royal at the Sports Illustrated offices in New York in the 1960s.

Another paragraph from Jenkins’s You Gotta Play Hurt:

Here's the deal: By the time the games come around at the Final Four, you’re lethally bored from three days of going to dreary press conferences to find out if any player has failed a drug test, from loitering and gossiping in the hotel lobby with the nation’s coaches in the hope of getting a scoop, an item, a quote. You’re suicidally hung over from going to three nights of ice-sculpture parties and winding up each evening in the hospitality room, drinking eccentric brands of whiskey in the company of wobbling, nostalgia-stricken SIDs and lost-in-the-past sports writers like yourself. This is where you remind the younger writers that you gotta play hurt. It’s where you allow them to prod you into telling the same old tales of yesteryear. So you talk far too long about the days when all of the athletes and coaches in all of the sports were infinitely more heroic and infinitely more accessible, days when all the writers chainsmoked and no writers jogged or drank nonbeer, days when you could hear the words being made on the paper by the deadline muse that lived in your typewriter, days when this guy and that one wrote literature that still gets quoted today by young sports writers with taste and a sense of history, whose ranks were growing a damn sight thinner each year, it seemed. 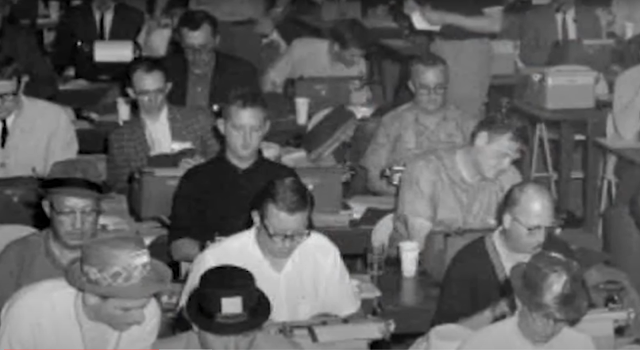 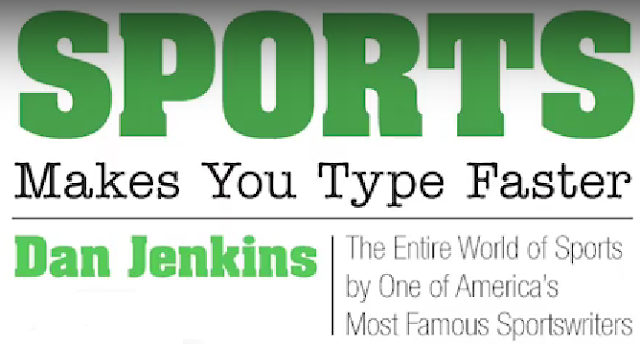 Posted by Robert Messenger at 14:30