Hans Fallada's Typewriter: A Remington Portable Model 3, or a Model 2? 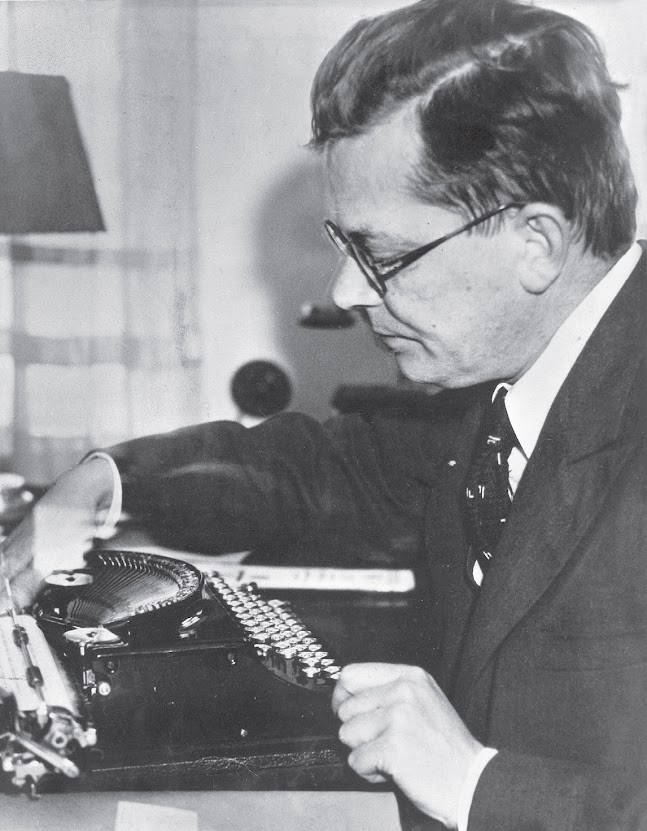 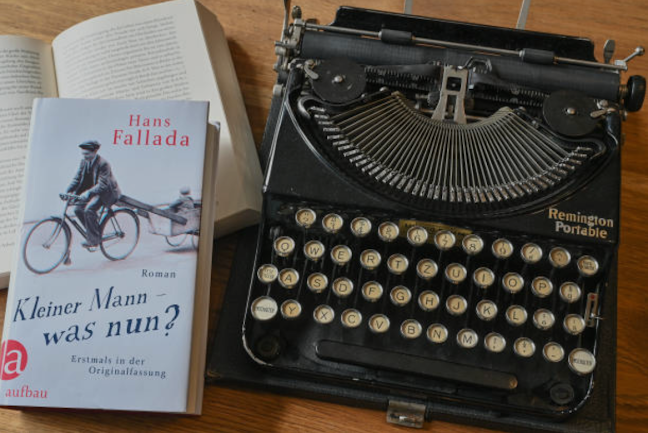 I don't think it’s all that unusual for someone to stage an exhibition celebrating an author who was known to have used a typewriter, and to include in the event a typewriter that particular author didn’t actually use. 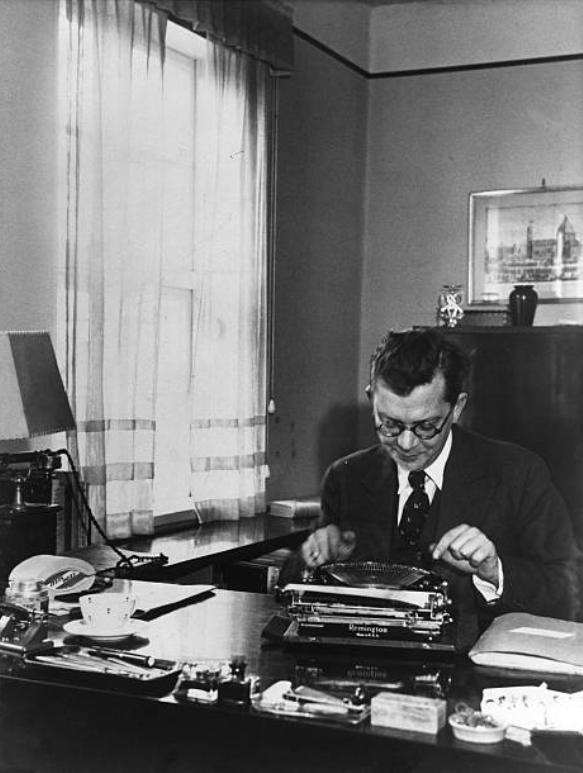 I’m wondering whether that’s the case with the opening of a small museum in the home where German writer Hans Fallada lived in Falladaring in Neuenhagen, Brandenburg, in the early 1930s. The opening marked the 75th anniversary of Fallada’s death, in 1947. The portable typewriter on display, said to have been Fallada’s, is in fact a Remington Model 2. Photographs of Fallada at a typewriter clearly show he used a Remington Model 3. It can’t be passed off as a simple mistake, as the collar around the typebasket of the Model 3, and the difference in operating a Model 1 and 2 (with typebars raised) from a Model 3, are quite distinct. I do hope the typewriter in the museum did belong to Fallada, in which case he owned two Remington portables. But given the known financial straits in which Fallada found himself, notwithstanding the success of his books, particularly outside of Germany, I would suggest ownership of two Remingtons is questionable. 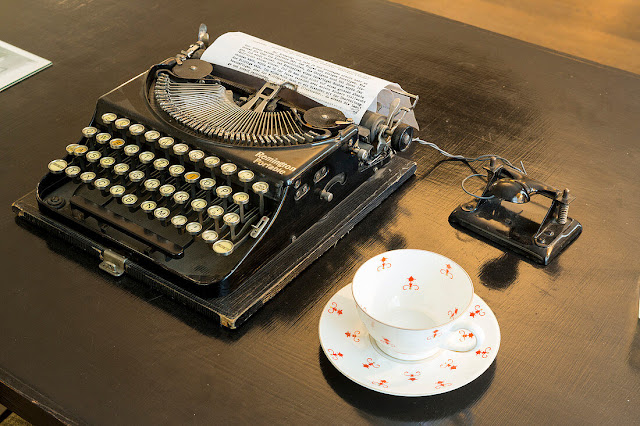 The Fallada museum is in the terraced house in which Fallada (real name Rudolf Wilhelm Friedrich Ditzen) lived with his first wife, Anna Margarethe “Suse” (née Issel, 1901-90) and their newborn son Ulrich Ditzen (1930-2013) from June 1930 to November 1932, when the Nazis started to keep a closer check on Fallada. On Easter Sunday 1933, on the brink of Hitler's rise to power, Fallada was briefly jailed by the Gestapo for “anti-Nazi activities”.
The Neuenhagen municipality has invested  52,000 euros in the renovation and exhibition design. It also pays rent of almost 400 euros a month. It was in Neuenhagen that Fallada wrote his novel Kleiner Mann - was nun? (Little Man, What Now?), published in 1932. It was the work that made him world famous. 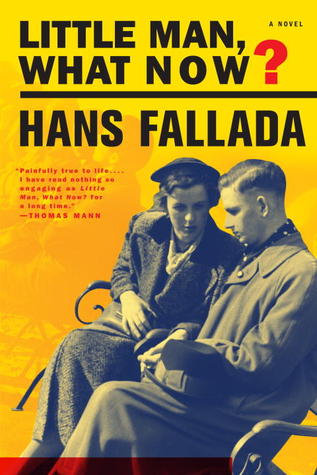 The publication of Little Man, What Now? marked the end of a period of relatively stable life for Fallada, during which he held down a string of respectable jobs in journalism, working for newspapers and eventually for the publisher of his novels, Ernst Rowohlt. Fallada’s novels had become noticeably political and started to comment on the social and economic woes of Germany. His breakthrough success came with 1931's A Small Circus (Bauern, Bonzen und Bomben - 'Peasants, Bosses and Bombs'), based on the history of the Rural People's Movement in Schleswig-Holstein and the farmers' protest and boycott of the town of Neumünster. It is regarded as “one of the most vivid and sympathetic accounts of a local revolt ever written”. 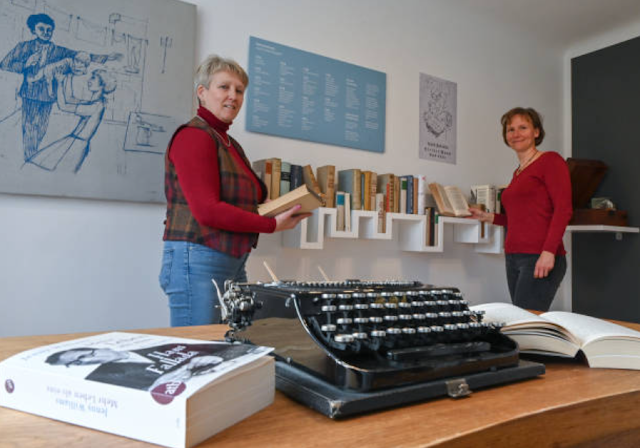 The people who put together the Neuenhagen museum concede it was a major challenge, since “the original inventory from Fallada's time” no longer exists. It is known that after Fallada’s death, in February 1947, his second wife (of two years), Ursula Mara Helene Agnes Losch (née Boltzenthal, 1921-58), even more seriously addicted to morphine than Fallada was, sold off Fallada’s unpublished works. It seems likely she would have sold his typewriter(s), too, to pay for her needs. 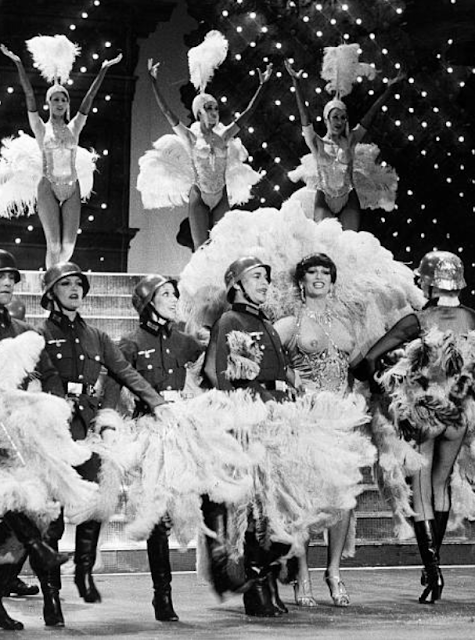 Fallada was born in Greifswald on July 21, 1893. In the year of his death, aged 53, Jeder stirbt für sich allein (Every Man Dies Alone) was published. An anti-fascist book, it was based on the true story of a German couple, Otto and Elise Hampel, who were executed for producing and distributing anti-Nazi material in Berlin during the war. Written in a ”white heat” in a mere 24 days in a Pankow, Berlin, mental institution between September and November 1946, Fallada regarded this as his “great novel”.

Overall, Fallada’s works belong predominantly to the New Objectivity literary style, a style associated with an emotionless reportage approach, with precision of detail, and a veneration for “the fact”. Yet Fallada's pseudonym derives from a combination of characters found in Grimm's Fairy Tales: The titular protagonist of Hans in Luck and Falada the magical talking horse in The Goose Girl.
Posted by Robert Messenger at 12:50

I feel sure that you're right. His machine is absolutely a no. 3, and the one on display is probably a well-intentioned (?) substitute. The differences between the 2 and the 3, which are obvious to us, are probably not obvious to someone who is unfamiliar with typewriters. Thanks for the good photo showing the no. 3 which I will post on my site.

Hi, what is the tool next to the machine in the fourth picture? I'm not talking about the cup of course. :-)

It's a hole puncher, once a very common sight on desks. People could collect their own confetti from the trays under the puncher.

PS: The wire coming off it is there to prevent it being stolen from the display.