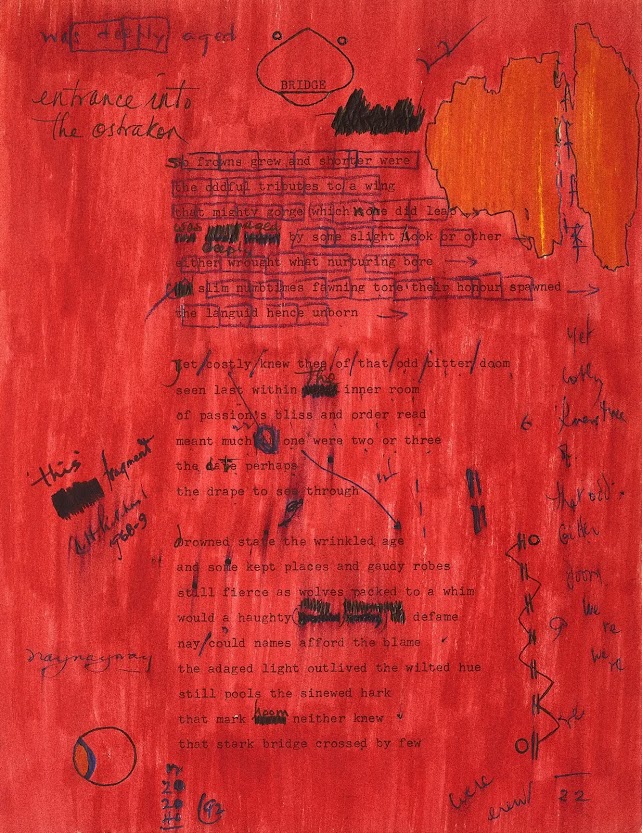 Typewritten poetry seems to be all the rage these days – I see our own beloved leader, Richard Polt, has lately been active in the field. Meanwhile, the 80th edition of the Whitney Biennial exhibition at the Whitney Museum of American Art on Gansevoort Street in New York City is showing a piece of typewritten poetry – at least of sorts. This year’s biennial, titled “Quiet as It’s Kept”, opened last month and was reviewed by Peter Schjeldahl in The New Yorker. The typewritten poem, “Bridge”, is the basis of N.H. Pritchard’s Red Abstract/fragment (1968-69), a striking image of which illustrated Schjeldahl’s article. Schjeldahl wrote that the tone of “gestation in personal testimony, distanced aesthetically” is infused in the poem by the “mystically inclined N.H. Pritchard, a Caribbean-parented New Yorker [his father was Jamaican] who was stepped in art history, and was a member of the Umbra Poets Workshop, a group of Black writers who met on the Lower East Side in the 1960s. He died in 1996, at the age of 56. Red Abstract/fragment (1968-69) is a lyrical verse text typewritten on a brushy red ground and scribbled with restive cross-outs, revisions and notes. Its meanings dance at the edge of comprehension, but with infectious improvisatory rhythms.” 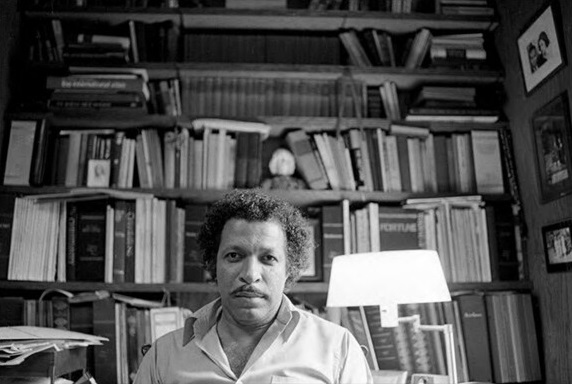 The Whitney says, “Pritchard is known primarily as a concrete poet who arranged words spatially across the page. The Biennial exhibits for the first time works that combine his innovative poetry with his dynamic, colourful drawings, including his monumental 22-page visual art text Mundus: A Novel (1970). Pritchard experienced a fundamental shift in his work in 1967 when he encountered what he termed the transreal. As he elaborated in an unpublished video from 1981: “I feel there is one reality, and that reality is God; everything else is actual or what I call transreal.” This concept would manifest in his writing and drawings, symbolized by the shape of a circle.”

As far as I can make out, this is the poem:

so frowns grew and shorter were

the oddful tributes to a wing

that mighty gorge which none did leap

was deeply aged by some slight look or other

either wrought what nurturing bore

Yet costly knew thee of that odd bitter doom

seen last within the inner room

of passion’s bliss and order read

meant much if one were two or three

the drape to see through

and some kept places and gaudy robes

still fierce as wolves packed to a whim

would a haughty defame

nay, could names afford the blame

that mark whom neither knew

that stark bridge crossed by few

Norman Henry Pritchard was born in New York City on October 22, 1939. His poetry is considered avant-garde, often including unconventional typography and spacing. Pritchard studied for a BA degree at New York University, where he was president of his campus Fine Arts Society and an active contributor to his college's literary magazine. He did graduate work at Columbia University, and taught briefly at the New School for Social Research and was a poet-in-residence at Friends Seminary. During the years he was a member of the Umbra poets, his work appeared in magazines and journals such as Athanor, Liberator, Season, Negro Digest, Sail, Poetry Northwest, the East Village Other and Gathering, as well as in several anthologies of African-American writing, including Walter Lowenfels's In a Time of Revolution and Natural Process, edited by Ted Wilentz and Tom Weatherly. Pritchard's work was published in two books and three journals: The Matrix: Poems, 1960-1970 and Eecchhooeess, and New Jazz Poet, The New Black Poetry and In a Time of Revolution: Poems from Our Third World. He died of cancer on February 8, 1996, in eastern Pennsylvania.

Posted by Robert Messenger at 10:26