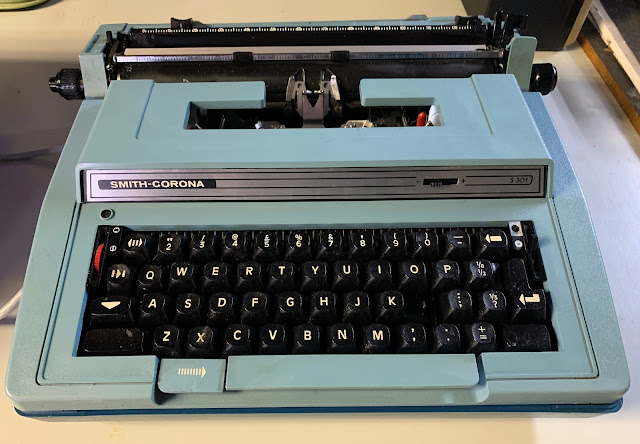 This 1983 Singapore-made Smith Corona S 301 'electro-mechanical'* typewriter (Model 3LRN, serial number 3LRN140483) was so long on my back-burner – more than five years by my reckoning - I’d forgotten what its problem was. Whatever it was, when I finally got to it on the weekend it wasn’t letting on. At least not to just the one problem. The whole thing was going crazy mad, back spacing across the width of the platen on its own accord. A late restyling of the Electra, the S 301 was one product, though an important one, from Smith-Corona’s outlay of $50 million on research and development from 1978-82. For me, this particular machine wasn’t worth the pittance I had paid for it at a local rubbish dump’s recycling centre. (*SC's way of distinguishing it from an electronic typewriter.)

When I took it apart the mechanical construction struck me as being very Japanese, especially in regard to the hallmarks of automated assembly. And SC certainly did admit to at least a fair degree of automation in its Singapore plant. Of course, when this machine was made SC was still at loggerheads with Brother over its 1974 accusation of “dumping” electric portables on the US market. When the Brother brouhaha began, SC had 4000 workers at South Cortland making electric portables, by 1985 the work force was down to 1000. The US Treasury Department had agreed with SC about the dumping accusation, but the Court of International Trade in 1982 did not. When, later, the international court did side with SC, Brother appealed. 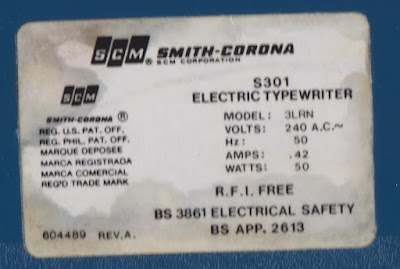 While all this was going on, SC lost $8.8 million to the end of June 1981 and $11.6 million in 1982-83. In between, it had decided in June 1982 to close its 73-year-old Groton plant by the end of 1983 and move production from there to Singapore. Eventually, in July 1992, SC, having made 30 million typewriters in the US in 83 years, announced it would close its 420,000-square-foot Cortland plant and move remaining operations to Tijuana, Mexico. SC’s chief executive and chairman G. Lee Thompson said Cortland workers earned $20 an hour, Mexicans were paid $3 to $4 an hour. (When Coronas were first made in Groton, a work force of 11 was paid 15 cents an hour.)

SC made the shift south of the border in 1994 and completely shut down the Bennie Road site in 1998. This marked the end of typewriter making in America, which went back to 1873. Thompson blamed the George H.W. Bush administration’s trade policies, after it decided to veto a broad House of Representatives-approved bill which would have helped SC gain punitive customs duties on Japanese typewriters. Yet the US did not at that time charge tariffs on typewriters made in Mexico. 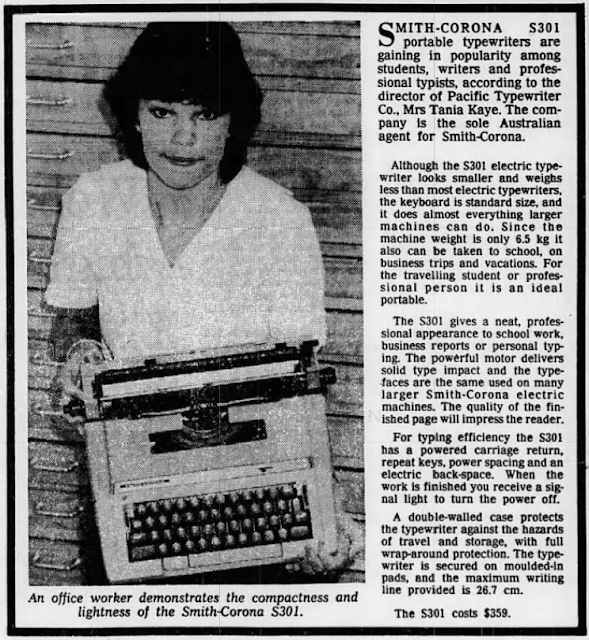 Melbourne Age, May 16, 1983
SC had announced in January 1973 it would spend $4 million on a new, fully integrated factory on eight acres of reclaimed land in Singapore. As in the case of the justification for the move to Mexico almost 20 years later, SC cited “Singapore’s cheap but relatively skilled labour”. A new range of the Electra (of which the S 301 is a later version) was to be made there – typewriters which didn’t use the cartridge ribbon. Meanwhile, SC persisted with its production at the old Salter factory in West Bromwich outside Birmingham in England, investing $1 million in new machinery but making significant job cuts. SC said the British plant would produce the Coronamatic with cartridge ribbon (introduced in the US in early 1973), with 80 per cent of output going overseas.
Posted by Robert Messenger at 22:51

I've run across quite a few of these over the years. Uninspiring little gadgets. Their bones go back to the Skyriter, and even further back to the Zephyr! Take that original Smith-Corona ultraportable, tinker with this and that mechanism, add various doodads, stick a little motor in there, give it a chunky plastic body, and voilà.