HOW THE TYPEWRITER GOT ITS PLATEN 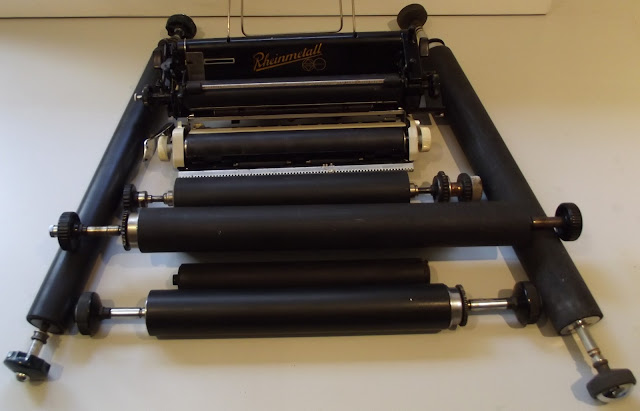 “Hey Robert, what’s a typewriter roller called?” a sub-editing colleague called from across four pods of typewriterless desks on the editorial floor of The Canberra Times.
“A platen,” I answered.
“Thank you, of course,” he said. “Six letters, starts with 'P'”.
“Why, as a matter of interest, do you ask?”
“It’s Clue 49 Across in the Quick Crossword at the back of Times2 in today’s paper.” 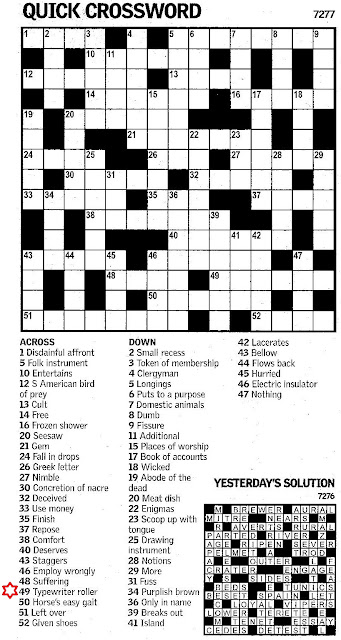 To my utter astonishment, I subsequently found very few people in this modern newspaper office - and that includes printers - knew what a "typewriter roller" was properly called.
If my friend, during the idle moments he had found between treating news copy, had been reading my column at the opposite end of Times2 in that Friday edition of The Canberra Times - instead of doing a crossword puzzle - he might have never needed to ask.

Indeed, he lives in Queanbeyan, a town just outside Canberra which is home to The Print Museum. There are plenty of platens in that building, and only a few of them are on typewriters.
Beyond our small worldwide army of typewriter aficionados, “roller” (or occasionally “cylinder”) is today often used to describe a typewriter platen, especially by eBay sellers of vintage machinery. Similarly, there is a tendency to call typebars “hammers”, though this is not a modern thing.

In many cases, however, components of typewriters are referred to in printing-related terms, such as “platen”, “typebars”, “typeslugs” and the “typebasket”, and that has been the situation for well over a century now.
It is hardly surprising. 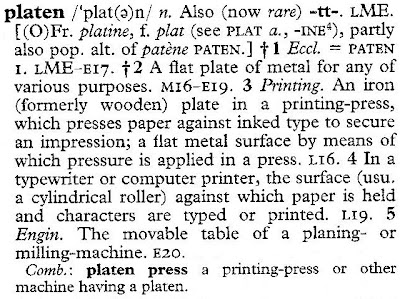 The word “platen” (or platyne) was first used in the English language in connection with printing in 1541. It is a 15th century word which comes from the late Middle English plateyne, or plateine, a chalice cover, which in turn emerges from the Middle French platine, a metal plate. The origins of the word are in the French plat, or flat, as in plate.

Platen came to be used in relation to printing as a means of describing an integral part of the methods introduced by Johannes Gensfleisch zur Laden zum Gutenberg (1398-1468), above, the global inventor of the printing press. Gutenberg, a German printer and publisher, introduced modern book printing. His 1439 invention of mechanical movable type printing started the Printing Revolution.

Therein lies a broad clue regarding the use of the word “platen” for a typewriter “roller”. So much of the key terminology relating to typewriters stems from the printing industry.
And that’s little wonder. After all, early typewriter inventors such as John Jonathan Pratt, Christopher Latham Sholes and John Jones were involved in printing, Pratt and Sholes as newspaper owners-publishers-editors and Jones as a printer.

But the use of the word “platen” in connection with the typewriter comfortably predates the inventions of these three.
Michael Adler in The Writing Machine: A History of the Typewriter (1973) listed Frenchman Gustave Jean-Emile Bidet (Bidet means a “small horse” in French, by the way) as the first person to add a platen to the typewriter – in 1837.

On July 19 of that year, Bidet, a watchmaker of 117 Rue Saint-Honoré in Paris, was issued with a five-year patent for a “mechanical typesetter”. 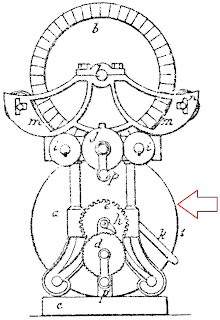 Bidet’s typewriter, like so many others of that that time, did not take off, and apparently in about 1840 Bidet had the patent taken from him by royal decree. Perhaps in disgust, he took his watchmaking business to Valognes, Normandy, where he continued to be an active public figure.

Metal platen, Noiseless portable typewriter
Of course, Bidet did not refer to the cylinder in his typewriter as a platen. He was, after all, involved in watchmaking, not printing.

It should be borne in mind that Scientific American editor Ely Beach (above, in connection with Pratt’s machine in 1867) and James Densmore (in relation to Sholes’s machine in 1868) were the first to put the words “type” and “writing” or “writer” together.
Until then, none of the inventions we refer to today as “typewriters” – dating back to Henry Mill in 1714 and including those of Burt, Thurber, Thomas, Francis, Jones and Pratt et al - were called typewriters. It is a mere convenience on the part of historians that we now do call them “typewriters”.
Much more common words to describe these inventions at the time were “typographer” or “typographic machine”. Burt’s machine was a “typographer” or a “Family Letter Press”, Thurber’s was a “machine for printing” and those of both Jones and Pratt were “mechanical typographers”.

Thurber’s patent application described a means “for Printing by Hand by Pressing Upon Keys Which Contain the Type, called ‘Thurber’s Patent Printer’.”
This use of “typography” in relation to most of these inventions points to a close alignment with printing. Indeed, most early “typewriter" inventions, it could be said, were seen to be for machines that might potentially be produced as “small printing presses”.

Thus the use of printing terms came to be incorporated into “typewriter” designs.
The first use of the word “platen” in relation to a typewriter came from an American pistol manufacturer, in 1843. 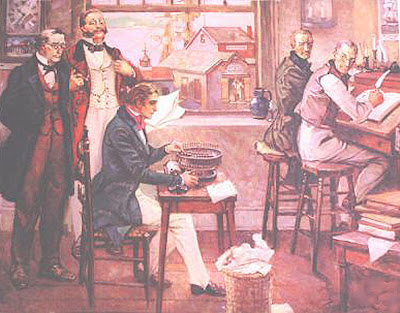 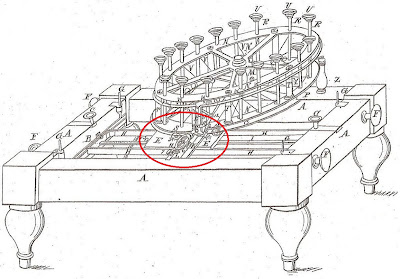 Thurber used to word “platen” throughout his patent applications. His original concept was, indeed, to use a “platen” in its original sense, as a flat printing surface. Like Bidet before him, Thurber also attempted to incorporate differential spacing in his machine.
A later Thurber model introduced a cylindrical platen – and, as with Bidet, the printing was done around the cylinder rather than along its length. 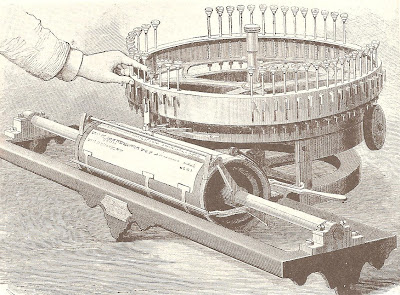 From that point onwards, the typewriter platen was there to stay.
When Christopher Latham Sholes came to use the word “platen” to describe the cylindrical printing surface on his typewriter, it was far from new to him.
As a publisher-editor-printer, Sholes would have been most familiar with the word. And even when he gave up all that newspaper work to move to Milwaukee to be a port duties collector in 1863, he still couldn’t escape it. 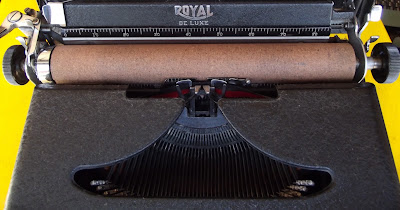 Cork covered platen
In Milwaukee, at Carl [Anglicised to Charles] Kleinsteuber’s machine shop, where Sholes continued to tinker with his various ideas, Sholes met Samuel Willard Soulé, a draughtsman and civil engineer.
Soulé was to set Sholes on his path to inventing, patenting and having his inventions manufactured.
Typewriter histories credit Soulé with “aiding” Sholes to design and build a machine for addressing newspapers to customers subscribing by mail.
The truth is, Soulé had already patented that invention three years before Sholes had even arrived in Milwaukee. And in his patent application, Soulé had used the word “platen” frequently. 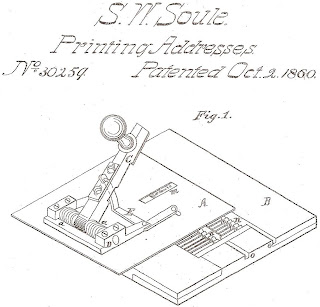 Soulé, born at Pompey, Onondaga Country, New York, on January 25, 1830, had first patented an invention in 1855, when he was living in Oswago. This was for an excavator, which he improved on two years later while living in St Louis.
On October 2, 1860, Soulé, by now in Milwaukee, was issued with a patent for his address printing machine (above). He then did join forces with Sholes, who had begun working on a numbering machine, and in 1864 the pair patented a paging machine (assigned to Sholes). 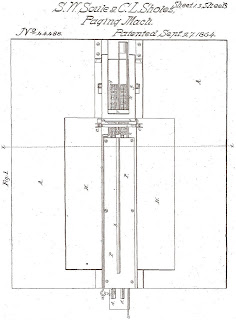 They followed this in 1866 with a page numbering machine. 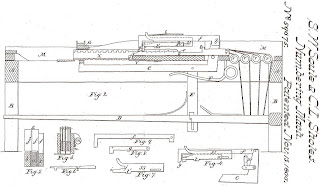 It is widely accepted that Sholes was working on the numbering machine at Kleinsteuber’s workshop when in 1867 friend Carlos Glidden brought to his attention a copy of Beach’s Scientific American, showing the work Pratt had done on his typewriter and suggesting Sholes give up the numbering machine to work on a word writing machine. The rest, as they say, is history ...
Soulé continued to work on printing devices after he abandoned the Sholes typewriter project, and in 1872 patented a hand press while living back in New York. He was issued with a patent for a paper cutting machine in 1874. Soulé died of cancer in Brooklyn on July 12, 1875. 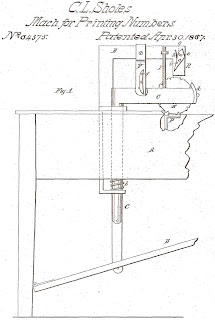 While working concurrently on his typewriter, Sholes continued to patent designs for page numbering machines. These were issued in 1867 and 1869, both in his name alone. 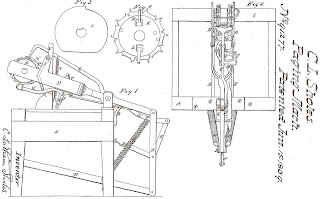 His last patent for the numbering machine, assigned to James Densmore, was issued in 1871, just before the first of his typewriters was made by a team under Densmore and Kleinsteuber artisan Matthias Schwalbach in an old mill in Milwaukee.
The word “platen” was used in all these Soulé and Sholes page numbering machine patent applications, and also in those for the Sholes typewriter, dating from the first two issued in 1868 (which included Soulé’s name along with that of Glidden). 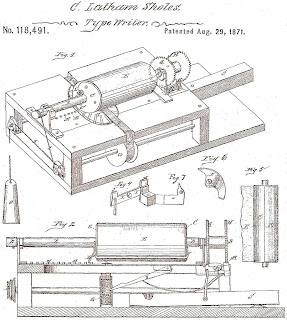 This is Sholes' 1869 "axle" design, in which his cylindrical typewriter platen is clearly seen for the first time. Below is the rather large platen as it eventually appeared on the Sholes & Glidden typewriter: 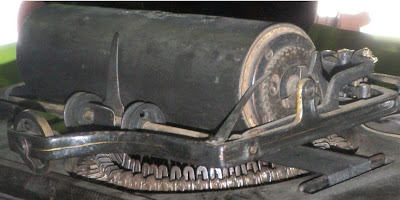 By the time Remington mechanical engineers William McKendree Jenne and Jefferson Moody Clough took over the re-designing the Sholes & Glidden typewriter at Ilion in New York in 1875, they too were describing the printing surface as a “platen”. 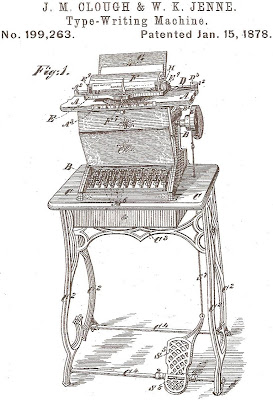 And “platen” it has remained ever since. 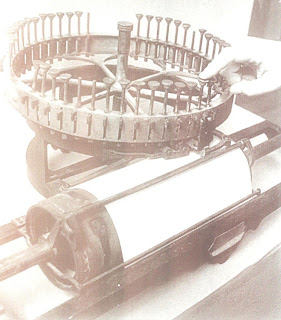 TEARJERKER FOOTNOTE: There is a rather sad story told about Soulé’s childhood. Apparently his mother died when he was 12 and the family was broken up. Samuel's father was teaching in Michigan, and Soulé set out on foot to find his dad. “It was a long and wearisome journey and he was often exhausted and faint for want of food. Sometimes he was overtaken by some farmer returning from market who gave him a ride. Sometimes he found passage on a canal-boat. Having reached nearly the end of his journey, he was directed to cross a field by a path to shorten the way to the house where his father was said to be boarding; but utterly worn out and discouraged he sat down upon a log and began to cry. Then a person came along and asked the cause of his sorrow, and looking up, he saw the face of his father. From that day, and as long as his father lived, they shared each other's fortune.”

Posted by Robert Messenger at 18:26

Very, Very interesting post. Thank you. Now I finally know why the platen on a job press was the ink covered plate and the roller on a typewriter is a platen.

And all but one of my machines have (has?) rock-hard rubber covers. I doubt I'll ever know how this compares to fresh rubber, unless I experiment with my one uncovered -just wood- platen. I know about the place in the States where they'll recover but the cost of sending would be a bit too much. I wonder if a skinny old inner tube might soften the blows?

I'll add only that the word is often mispronounced with a long "a," but it should be short.

Thank you for pointing that out, Richard, I hadn't thought to do so. Yes, you're quite right, as we do pronounce plate with a longer "a".