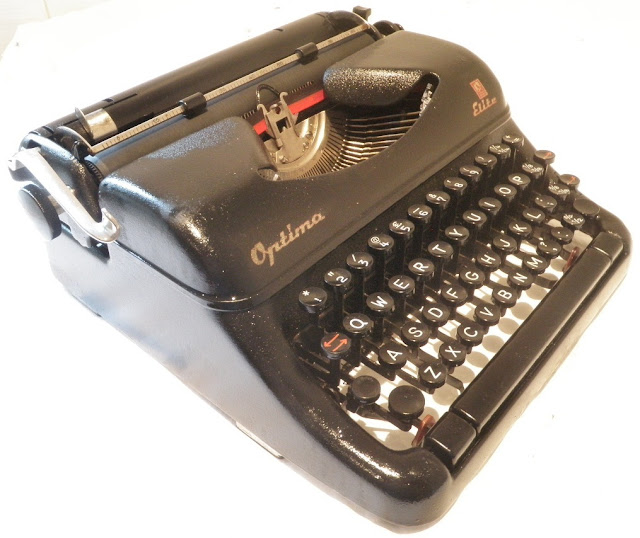 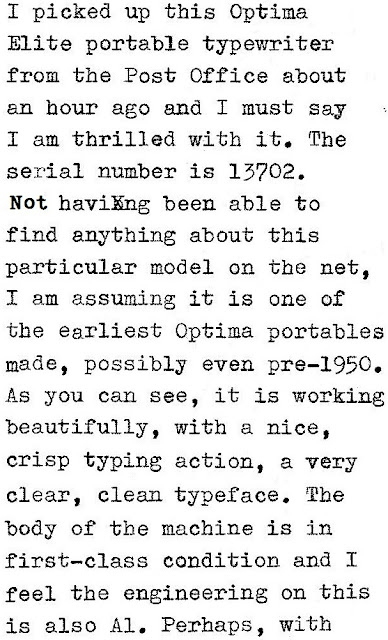 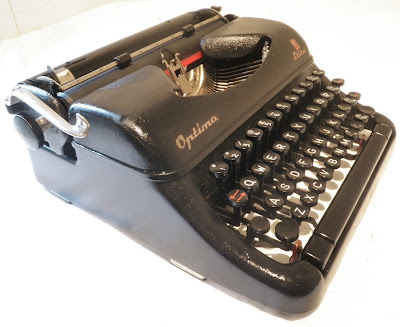 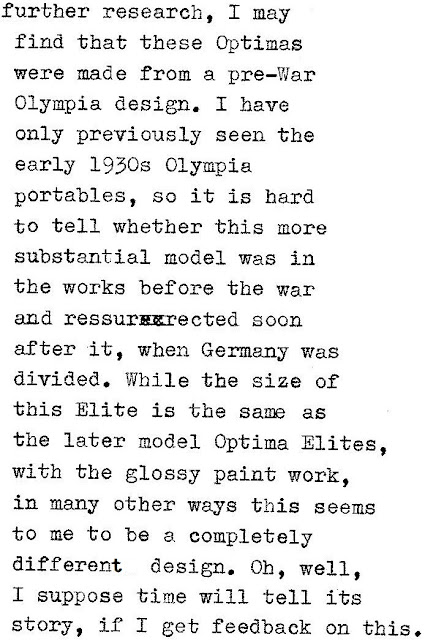 Since I wrote this yesterday, I have tried in vain to find out more about this model. The serial number database gives no clues, at least not for Optimas, regarding the seemingly low number of 13702. 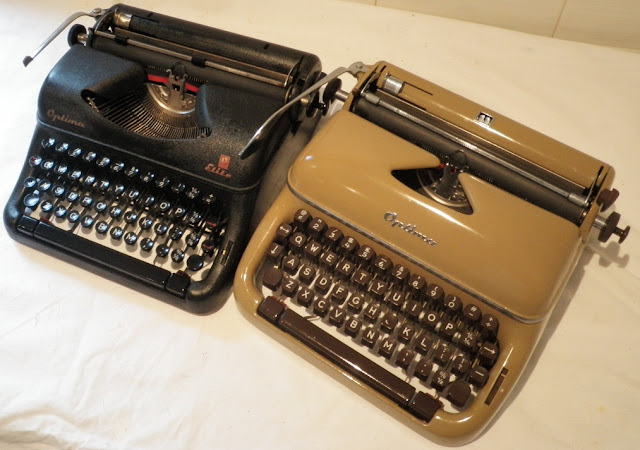 My guess is that this was an earlier, cut-price version of a design which at the top of the range used a high-gloss paint finish, the more familiar, centred metal name badge (rather than decals) and the fancy four-peaked paper support, and that it dates from about 1952 or 1953. Here is a photo taken at Optima's Erfurt plant in late August 1953, showing a couple of models with the flat paintwork similar to mine (perhaps the paper support is simply missing from mine?): 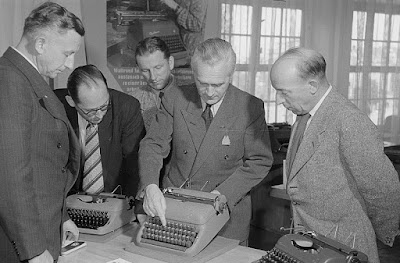 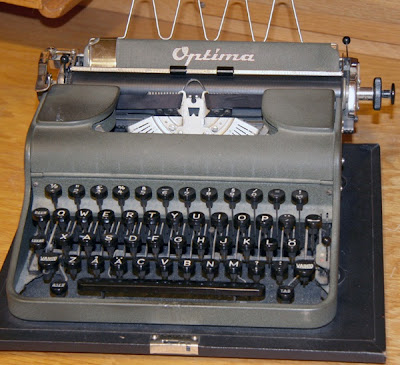 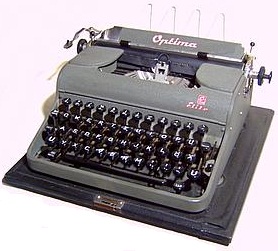 Optima also continued to make the much slimmer Plana until 1959. Optima remained in Erfurt, which is the capital city of Thuringa and the main city nearest to the geographical centre of Germany.
The official break with Olympia in Erfurt does not appear to have been legally sanctioned until 1951, two years after the German Democratic Republic came into existence. Indeed, Erfurt became a part of the Soviet Zone of occupied Germany on July 3, 1945, when American troops left the city. So Olympia-Optima must have been in limbo for quite some time.

My understanding is that Olympia staff won, through the International Court of Appeal in The Hague, the right to resume using the brand name Olympia, with a factory in Wilhelmshaven, a coastal town in the far north-west of Germany. Thus the Olympia brand was thereafter entirely based in West Germany. 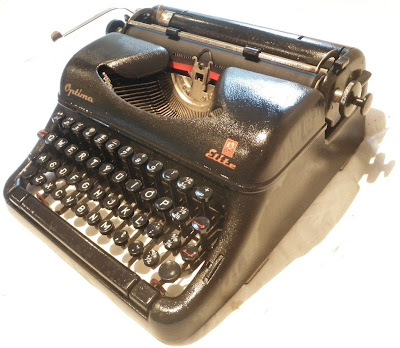 In about 1952-53, Optima started to develop its own designs, distinctly independent of the pre-war Olympia portables. Possibly the most detailed and accurate outline for Optima is contained in a PDF of Robotron's history at robotron.foerderverein-tsd.de/stk/robotronOpt.pdf 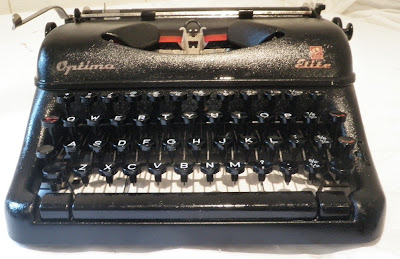 Even this, however, is very difficult for a non-German speaker to follow. It would seem that just before the time of the arrival of the Soviet occupying force in Erfurt, there was an attempt to transfer 1.8 million Reichsmarks, or 35 per cent of the share capital of the Olympia works, to Hamburg (but to whom I do not know). Because of a suspect processing error, this did not materialise. "This left the entire share capital of the company in Erfurt. Without these 'mistakes' [it was] not safe in Erfurt" and the production of typewriters was discontinued. 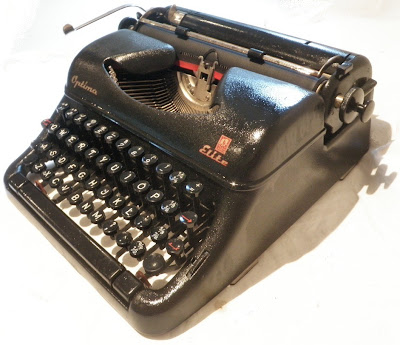 "From 1946 the works belonged to the Soviet stock company (SAG) and was incorporated into the group 'Totschmasch'. The operation was then 'Olympia Office Machines Ltd for Precision Engineering Plant Soviet Erfurt'. After the transfer to public ownership the operation between the 'Olympia Erfurt' and 'Olympia Hamburg, Wilhelmshaven' was judicially reconstituted. [After the] product name dispute the Erfurt company was renamed in 1950 as Olympia Office Machines Erfurt and in 1951-52 as Optima Erfurt VEB office machine works." I hope that makes things a little clearer. 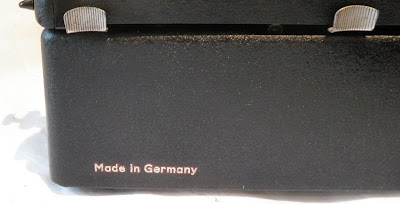 I have found on German eBay this one shiny black version of my new Optima Elite: 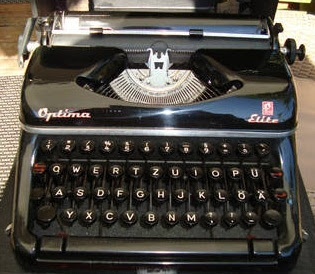 It would seem the far more common Optima Elite portables, with the high-gloss finish and centred metal name badge, came after this model. They have a more rounded ribbon cover, a much smaller opening at the top of the cover, a silver trim around it, and a new paper support design. The bottom half, however, appears to be identical. Here is one from my collection: 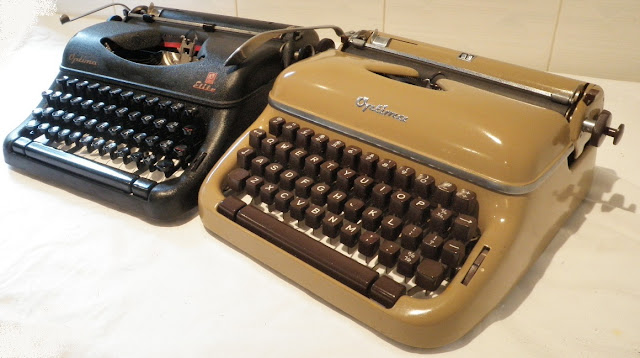 Here is an Optima display, again from about 1953. The Plana and the Elite can be seen in the foreground: 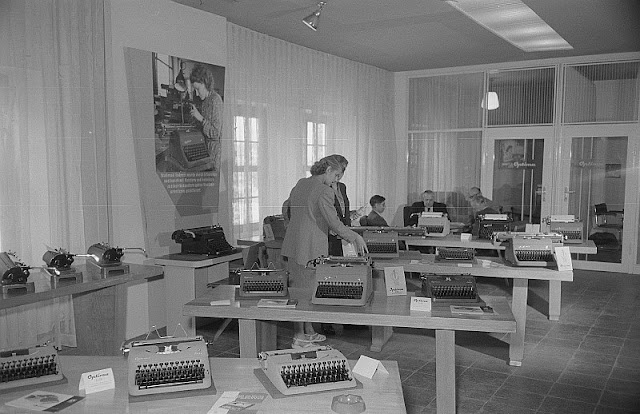 Posted by Robert Messenger at 10:09

Great looking typewriters. I really like the typeface, very nice and shows no signs of its age. Nice psot.

Beautiful typeface on this one.

I wish I could jump into a Time Machine and visit that store!

My Optima Elite, with the even lower serial number 12567 looks the same, except mine has the paper stand.

I just learned that the Optima Elite you present here is the second version. Model 1 retained the Olympia shape and serial numbering. Model 2 had a new shape and new serial numbers. Model 3 is the round one with the "Optima" tag in the middle.

I just gotta say that you put out an amazing amount of quality material on this blog. It's like getting a new book every week on my favorite subject.

Keep it up; I always enjoy your in-depth posts, even when I don't comment.

Wonderful looking machine! So shiny, and the typeface is very nice

I think the typewriter we have is an Elite. It does not have the cover on it. The serial # is 913811. Do you have any idea where I would find a ribbon for this machine?

I'm so excited to find this page! I just bought an Optima Super on Ebay, and had never heard of them before. This is great to learn so much about the company. I can hardly wait to get it now. By shodzi's comment, I apparently bought the Model 3, beige body with brown keys.

I just purchased an Optima Elite 3, and I really like it! It does not have the paper rest, the same as your mustard-colored Optima. One issue I have, however, is that I cannot fully return the carriage, as if it is not setting up high enough. Any suggestions?

I just bought an Optima Elite 3 and I need to find a ribbon for it. Anyone know where to get one?

@Marcheline....
How many millimeters is the ribbon?

well, i got a ribbon from a seller on etsy that lives in germany... works like a charm! now i just have to figure out how to remove the carriage, for possible future repairs. so far i cant find any instructions on where the screws are to remove it. anyone?

@Marcheline....
Oh, it's great. This machine was built by Optima in my town Erfurt/Thuringia/Germany. And i had learn by professional training to repair typewriter from the 30'/40' years! But it's a long time ago - in 1966! I think, the carriage must be move on end of the left or right side and the are the screws visible under it. But i belive this only - most i have worked in hollerith-machines.. Sorry

Thank you for your information, it is strange that they DID NOT mention the optima elite 45 which comes with an Arabic keyboard!
Cheers

I am trying to trace the current rights holder to the Optima name as I wish to use an Optima typewriter from the 1960's in a feature film. I would be very grateful if you could tell me who owns the rights to the Optima name.
Thanks