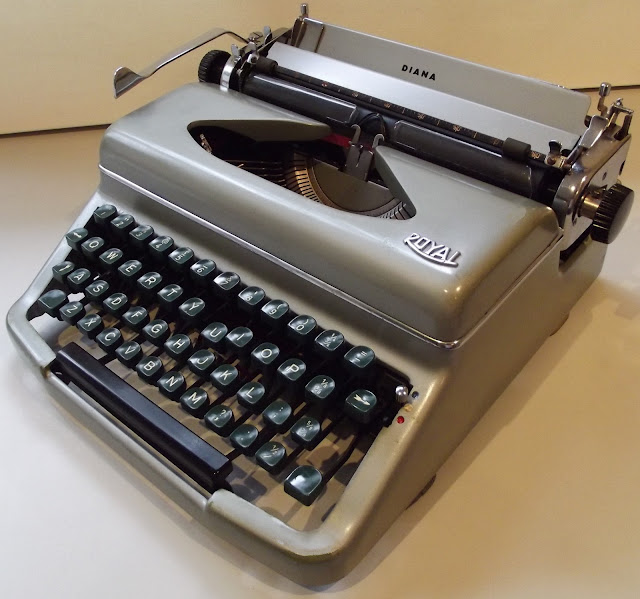 The Royal Diana portable typewriter was made in Holland by Royal-McBee Nederland N.V., a wholly-owned subsidiary of Royal-McBee Corp. 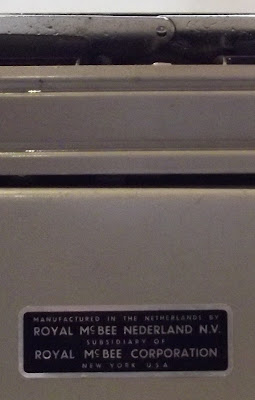 The company had originally been Halberg Machinefabriek (founded 1941), which produced the Halberg Traveler until Royal-McBee bought it out. 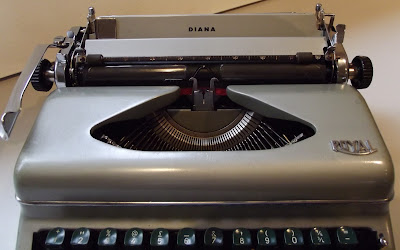 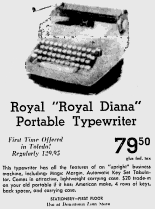 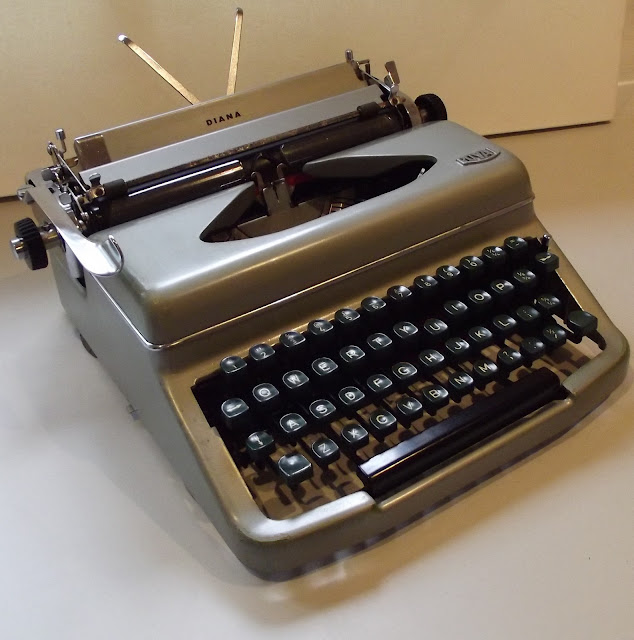 Will Davis on his Portable Typewriter Reference Site features a Royal Diana with the serial number of DTE 85312, which he says indicates perhaps a 1959 or 1960 production. Will’s page on the Diana is at http://machinesoflovinggrace.com/ptf/Diana.html
It features a typewriter with a Royal-like Diana logo: 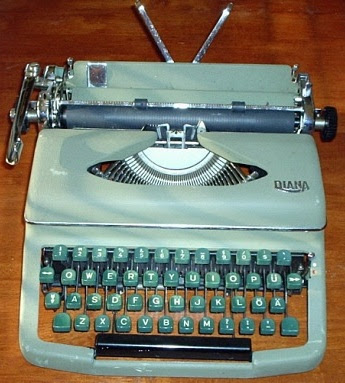 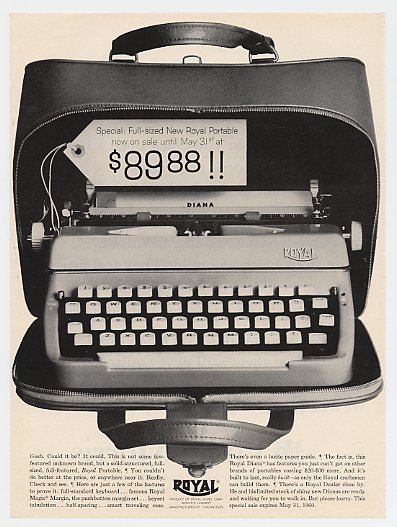 Georg Sommeregger tells us on his site http://www.typewriters.ch/collection/halberg_portable_typewriter.html
that Halberg Machinefabriek N.V. was first established in Limburg, a province in the deep south-east of Holland. Its directors were called Van Halder and van den Berg (from which comes Hal-Berg). 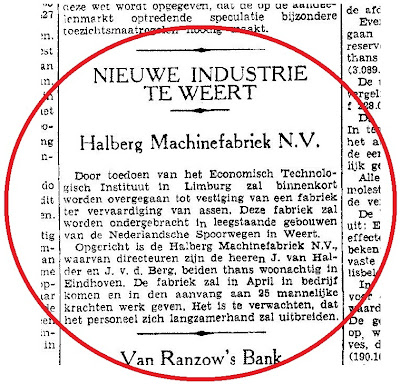 The company went public in February 1950 and started production of typewriters in 1952. In 1953 the factory moved to Cuijk, a town in the south of the Netherlands. On November 29, 1954, Halberg’s typewriter division and factory were taken over by Royal. 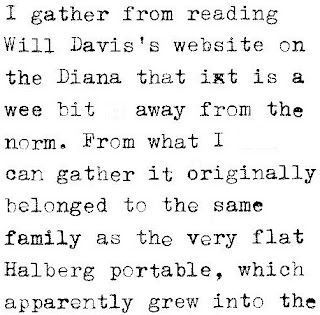 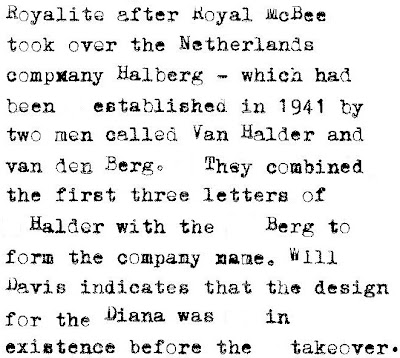 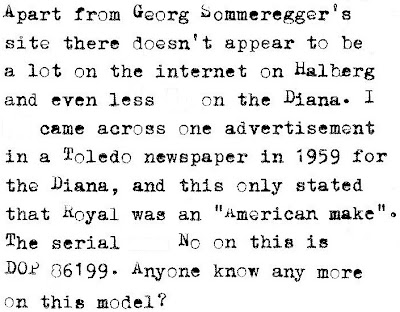 Here is a Royal Diana I found for sale in the US. It looks like an upgraded model, more like the one in the 1960 ad than mine: 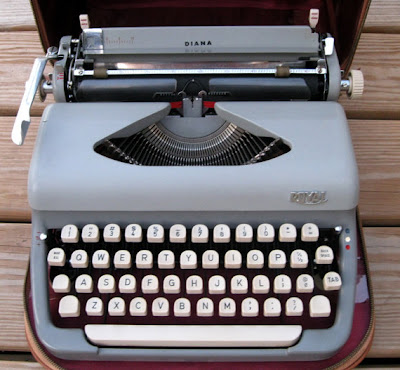 Posted by Robert Messenger at 14:53

Hi, I am glad you feature the Diana. I discovered one at a friend's place last year, it was in very bad shape so I cleaned and restored it as good as I could. I was amazed by the precise typing action. I can't access this machine now, but I seem to remember that the decals said it was made in Nuremberg.
Later on I saw a Diana on ebay, bought it, it is the same as yours. Although it has the same outer shape as the Nuremberg made, the type feeling is completely different. I will look up details.

Thanks, Georg. Will Davis refers on his Diana page to a Mannheim connection mentioned in Wilf Beeching's book, but I couldn't find it. I did find a Halberg company in Mannheim, but a different one (not a typewriter maker). I had a few problems typing with this one, as you can probably tell, but I suspect this was down to the way the typewriter had been treated over the years, not to the typewriter itself.

From what I found out, it appears that indeed the first "Dianas" were produced by the Royal Schreibmaschinen GmbH at the former ORGA typewriter plant in Nuremberg. The first model Royal produced there under the Royal name - the Royal Superia - was actually a continuation of the Orga line of standard typewriters. Production of "Diana" started ca. in 1952. The first version was the dark green one with rough surface. In 1954, Royal McBee was created by fusion of the Royal Typewriter Co. and McBee. My Diana sn 60548 looks exactly like yours, but bears the tag "Royal McBee GmbH Mannheim". This does not necessarily mean that they were produced in Mannheim, maybe still in Nuremberg. And production of this second version can be set around 1954 - 57, year when the production apparently shifted to the Netherlands (source Burghagen 1962). Yours would be the third version, with the "Royal McBee Nederland N.V." tag. Again according to the Burghagen list, production stopped in 1960. Will Davis shows a fourth variant on his page.
So this would be a few leads - but still work in progress! - , which I summed up here.

I've never touched a Diana -- all I can say is that I like the form and finish of yours a lot.

Georg's revelation about the Royal Superia is news to me. I had no idea what happened to the Orga.

There is something to learn about typewriter history every day.

Hi there,
Thank you for posting this interesting information.
My 12-year-old son bought a Diana typewriter in our local charity shop today (Surrey, England) for £5 and is wondering if any of you know how he can change the settings for the margins, please?
Many thanks

Hi Lynn. Sorry it has taken me so long to get back to you. The Diana uses a variation of the "magic tab" system, which can be pesky, but in the Diana's case is quite simple. On either end of the paper plate there is a chrome lever. You move the carriage to where you want the margain to be on the left side, then pull the left lever. Then move the carriage across to where you want the right margain to be and pull the right lever. The margains are automatically set that way. Regards, Robert Messenger

Thank you so much!

I just got an Administrator (the wide-carriage version of the Diana). It's marked on the back as being made by the Diana Schreibmaschinenfabrik in Mannheim, which locates the factory in Mannheim. Very nice typewriter.

Thanks Richard, well done. I hope you will let Georg know about it, I feel certain he will be very interested to hear about it.

Hi i found a DIANA ROYAL at my home and say something like this: MANUFACTURED BY DIANA SCHREIBMASHINENFABRIK G.M.B.H NURNBERG,GERMANY-A SUBSIDIARY COMPANY OF ROYAL TYPEWRITER CO.. INC ., USA

main cover is DIANA no royal just like the picture you posted.
I hope this help w your research

Hi. My 8 y.o. son just found this typewriter at my grandmother's house. It was a gift to my mom in 1960. It is fully operable and comes with the case. My son thinks it is the most amazing machine. Does anyone know where I could find an instruction manual for the Royal Diana?
Thanks

hey otter. was researching the diana and saw your question for a user manual unanswered.

richard polt's website has a ton of manuals in PDF. here is yours:

hope after 8 years you found it, and your now-16 year old son is still using the machine.

have a wonderful day.