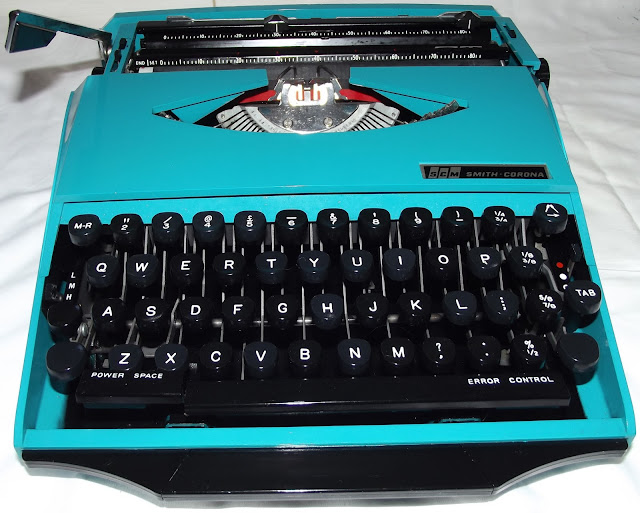 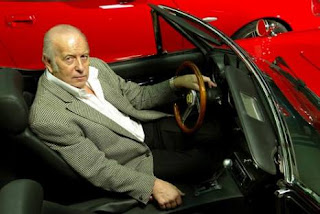 Alejandro de Tomaso
In a little diversion from normal business, in 1970 Tjaarda and de Tomaso designed a highly distinctive portable typewriter and its equally distinctive case. 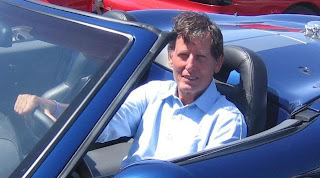 Tom Tjaarda
The typewriter is called the Smith-Corona Ghia-design Super G.
Tjaarda and de Tomaso briefly put aside cars to design the Super G for Smith-Corona Marchant, to be manufactured in West Bromwich, England. 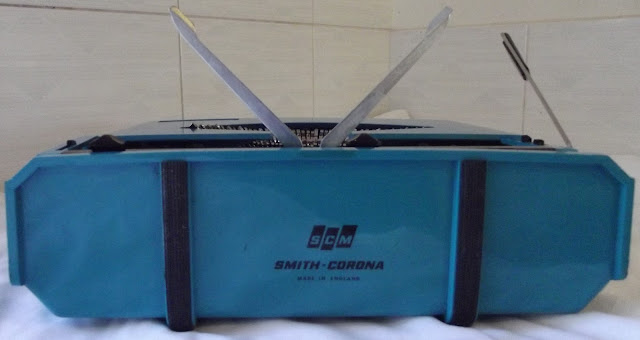 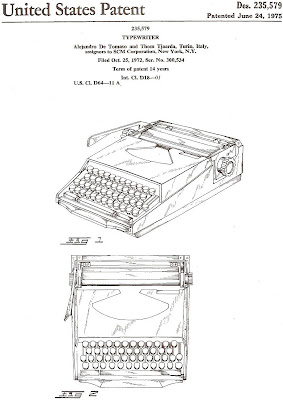 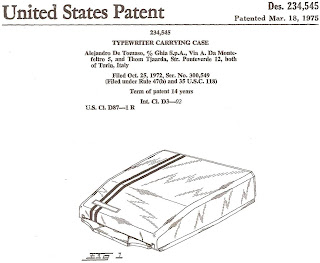 But they were also answering a challenge from just 12 miles away, in the town of Ivrea. Tjaarda and de Tomaso were with Carrozzeria Ghia SpA in Turin, Tjaarda as head of design and de Tomaso as owner. In Ivrea, Olivetti had commissioned the Valentine, originally designed by Ettore Sottsass in Milan in May 1969.

I’ll get back to the Tjaarda-de Tomaso typewriter later. In the meantime, a confession … 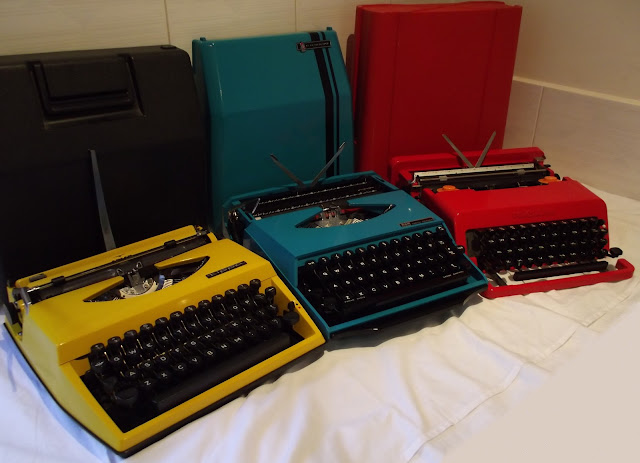 I have been known to be a bit impetuous. Last night, when I declared on the Gossen Tippa post that the Adler Tippa S was a lemon, may have been one of those occasions. May have been.
Nonetheless, when maschinengeschrieben commented that she did not agree with my opinion on the yellow Tippa, it got me thinking. 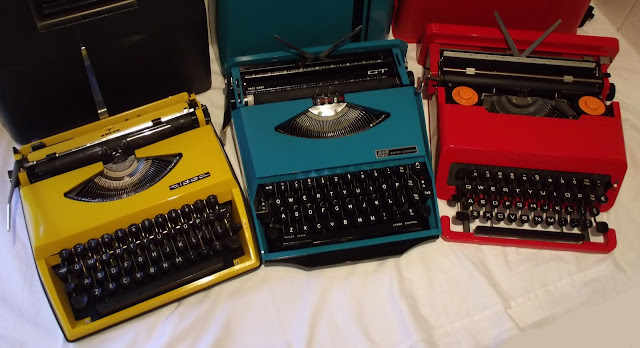 So much so I decided to drag out the three flashy portable typewriters in question – the Adler Tippa S, the Smith-Corona Ghia-design Super G and the Olivetti Valentine – and test them against one another. 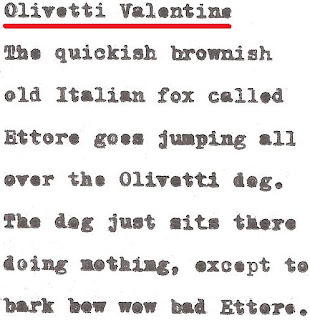 Old prejudices against the Valentine quickly re-emerged. The keys were too close together, the balance was all wrong, especially the weight distribution, and the typing imprint was blurred because of the vibrations caused as a consequence (and no amount of padding underneath could absorb it). 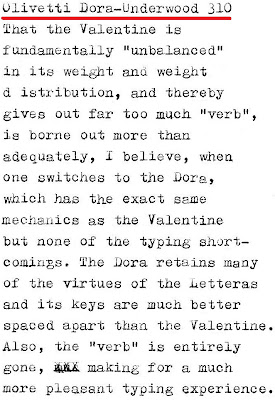 To confirm my suspicions about the design and structure of the Valentine, I then switched to the Olivetti Dora, and what a difference! A real pleasure to type with. Keys easy to peck at, smooth action, correct weight balance, no body movement – as rigid as you need. Good Dora, bad Val. 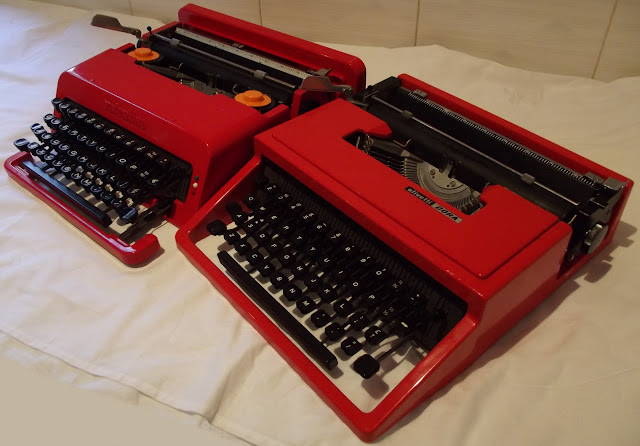 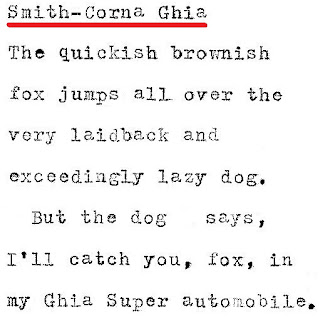 On to the SCM Super G, and while it was, as expected, a superior writing machine to the Valentine, it wasn’t quite as good as I had remembered it. Note to self: Check machine before making bold statements on blog. Maybe I have been using too many really good typewriters for my posts lately: Optima Elite, Alpina, Voss, Brosette, Remington Model 4. Not fair to judge plastic 70s machines against that lot! 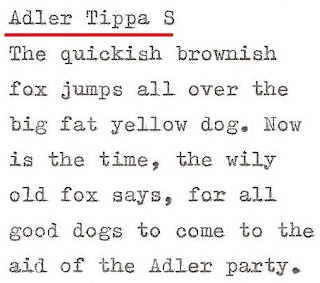 Finally, the Tippa S, maschinengeschrieben’s words ringing in my years. This time, I made some proper preparations: Changed the ribbon, lubed it, ran the air compressor through it, ran it a bit to see where the bumps and knocks were. Then the real test: Perfect score ... almost. Still a few (well, a lot, actually) reservations about that tinny sound and the “loose” feel of the Tippa S; but still, a good type. Certainly a long way better than the day before.
So maschinengeschrieben, to a degree I do concede defeat (Well, maybe not defeat; but I do concede I may have been a little hasty in my previous judgement of the Tippa S). The Tippa S remains a very, very long way from being anywhere near one of my best typewriters, but it’s not all that bad. Next time I’ll know to give a machine a fair trial before I unmercifully bag it on my blog. 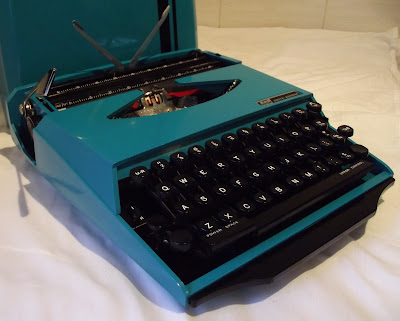 Let’s look at the SCM Super G in more detail, though. 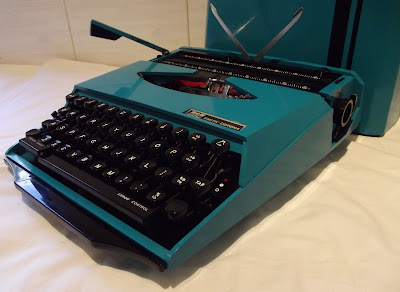 Alejandro de Tomaso gives us a tenuous link between the Super G and a great typewriter, in the Alpina (see earlier post). 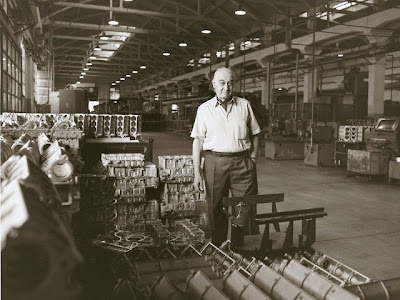 De Tomaso (above, the so-called "Face of Car Design"), born in Buenos Aires on July 10, 1928, was a motor racing driver as well as an industrialist. He raced a Maserati in two Formula One World Championship Grands Prix between 1957-59. He founded the Italian sports car company De Tomaso Automobili in Modena in the latter year and built up a substantial business empire. 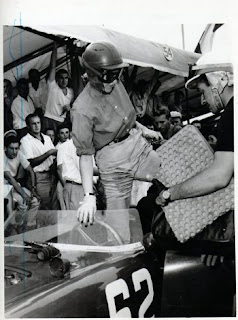 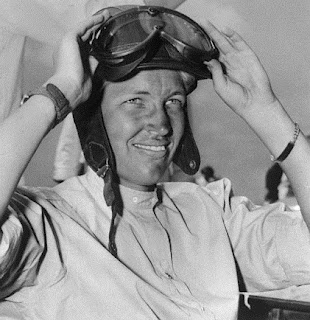 Isabelle Haskell, from Red Bank, New Jersey
Married to Isabelle Haskell, an American heiress who also raced cars, de Tomaso acquired the Ghia and Vignale coachbuilding studios and rescued Maserati from bankruptcy. Ghia was sold to Ford in 1973. De Tomaso died of heart failure in Modena, Italy, on May 21, 2003, aged 74. 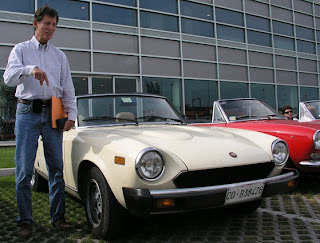 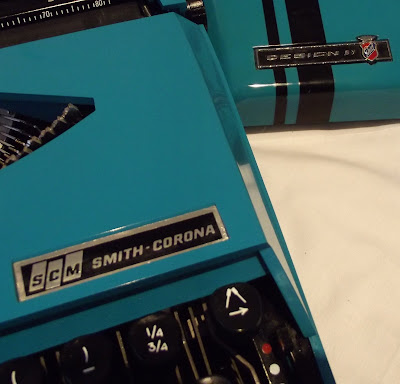 No wonder the Super G typewriter is said to “share many characteristics with cars … Racing stripes, sleek lines and bright colours (orange and turquoise) are all reminiscent of Ghia designs produced for car makers such as Volkswagen, Alfa Romeo and Ford.” 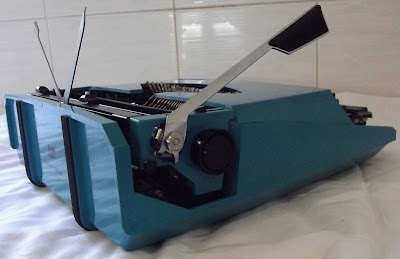 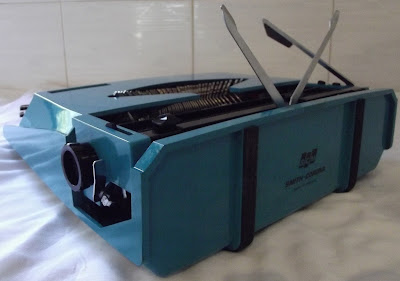 As Alan Seaver at Machines of Loving Grace points out, “The Super G sports rubber tire treads instead of feet [and] racing stripes on the clamshell cover." 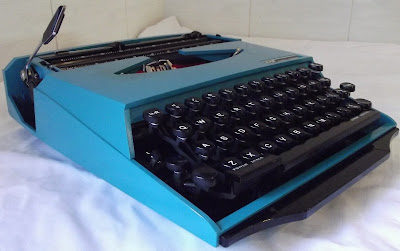 Under the stunning shell, however, the typewriter is a standard English-made plastic SCM, plus power spacing. 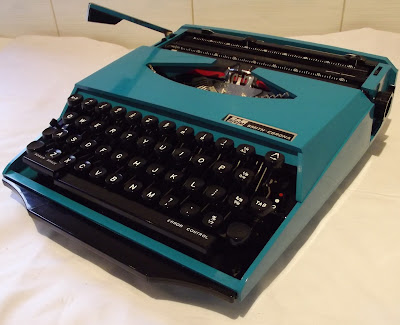 Alan suggests that since Smith-Corona used model names like Zephyr, Clipper and Skyriter, the Super G may have got its name from the Lockheed Super G L1049G Constellation. 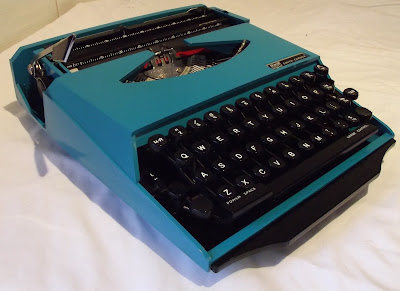 Super Gs in other colours (orange and mocha brown): 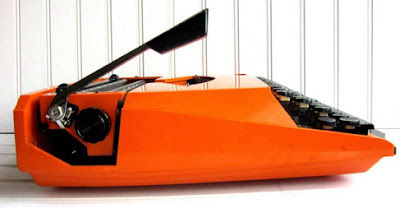 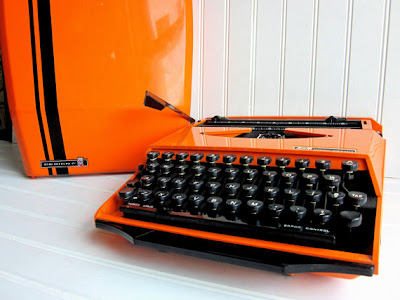 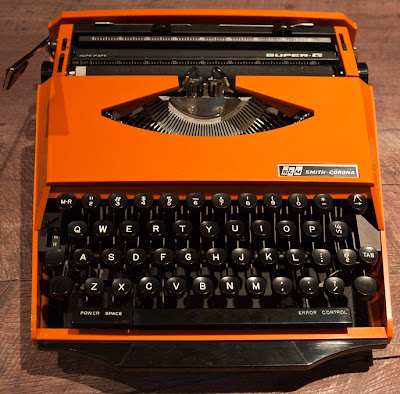 Is this Cameron's? I think I recognise the timber 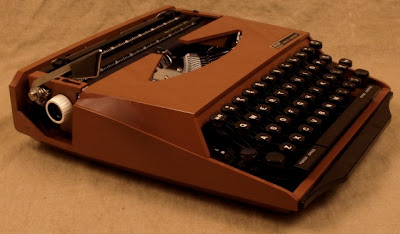 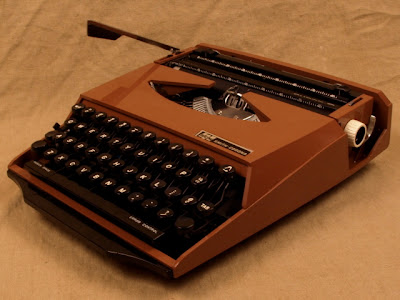 I am glad about this vindication of the tippa. I agree it sounds not very elegant, but in terms of typing action, it's one of the better machines. And I'd say typing feel is a very subjective thing.
The Super-G typewriter looks interesting with the racing stripes (the Lettera cases have them, too), but to me, the keyboard seems a bit crammed.

Unfortunately it is not A.DeTomaso on the wheel of the Ferrari concertable. It is the bancrupt Maserati dealer Ernsdoerffer of Stuttgart Germany.
Roland Jaeckel
DeTomaso Parts Center Europe

I was given the mocha brown model as a wedding present. Has a bit of paint spatter on it, but hardly noticeable. Other than that it's in perfect condition. I love it! As a writer, it's pretty handy when I'm in need of inspiration. Something about clacking away on a typewriter gets the mind catapulting into imagination.
One question though, any idea where I could get ink ribbons for this?

Isaac, the "paint" may be liquid paper - it can be removed using Shellite without doing harm to the sheen. Ribbons are readily available in most countries. In Australia we can buy Fullmark ribbons from Malaysia. What country are you in? Nice wedding present, by the way.

Great post Mr. Messenger. I have just acquired one of these. Mine has GT written on the paper tray.

Mine had a few issues. The line spacing lever was loose. Instead of being able to easily remove the left carriage end cap to see what was going on, it involved removing the platen, removing the variable line spacing mechanism too, a real pain just to find a screw was loose which rectified the problem. Even taking off the shell is a pain. No external screws, you have to gain access down through the machine, pushing type bars and linkages out of the way. Not a user friendly machine. Quality is a bit low and it is very loud due to the clattery shell unless you use it on a mat. Type impression isn't great, a bit wobbly here and there, I think just due to lots of play and vibration. Sometimes the carriage shift makes it jump a space.

It looks great but I would find writing a letter on it a pain.

Hi! I have two models for Ghia. 1)Harmony and 2)zhephir supreme,wichi is the difference betwen this models? Thank you so much.

Forgive me if this is a stupid question, but let's say I love the body style of the Super G, but would like a more solid type action, and maybe even a more interesting typeface. I recall hearing about some folks swapping out the action on an OliVal with a different Olivetti (I can't recall which, was it a Lettera?). Is there a compatible SC action that could fit inside the Super G?
Thanks very much!
-=Charlie
Los Angeles