Typewritten Letters From Afar: In Time and Distance 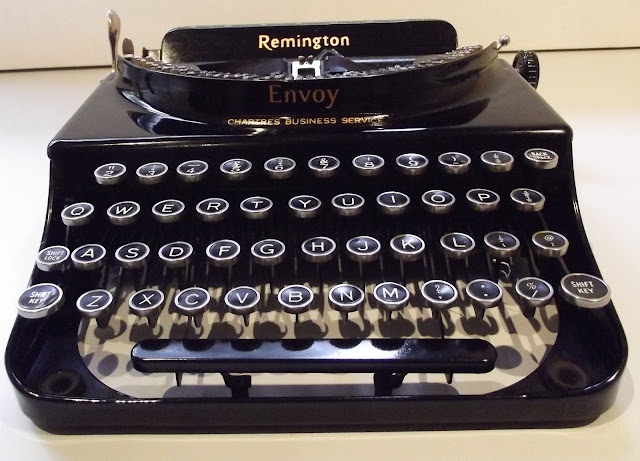 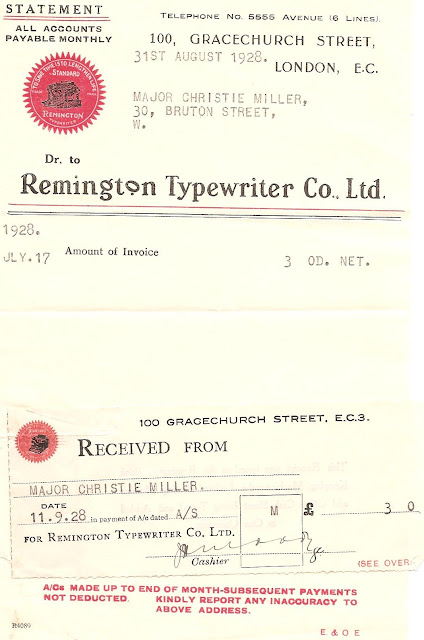 This 1928 Remington account for three shillings was sent to Major Sir Geoffry Christie-Miller, who was born on March 15, 1881, and educated at Eton College and Trinity College, Oxford (graduated Master of Arts). He fought in the First World War with the Oxfordshire and Buckinghamshire Light Infantry and was mentioned in dispatches. He was decorated with the award of the Military Cross and the award of Companion, Distinguished Service Order in 1919. He was later promoted to Colonel and held the office of Deputy Lieutenant of Cheshire. He was invested as a Knight Commander, Order of the Bath in 1951. He lived his later life at Acton Grange, Nantwich, Cheshire, England.
Major Christie-Miller’s citation for his DSO said that on September 30-October 1, 1918, his battalion was "engaged in operations south of Fleurbaix. He reconnoitred the ground beforehand, established his headquarters far forward, and maintained it there for two days under continuous shelling. The successful issue of the fighting was due to his personal control and fine example of indifference to danger. He continued to command his battalion after being wounded.”
Christie-Miller died on April 2, 1969, aged 88. Gee, imagine getting a typewriter serviced for three shillings! 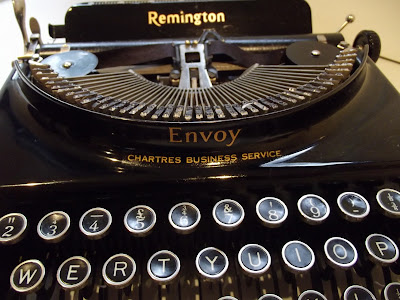 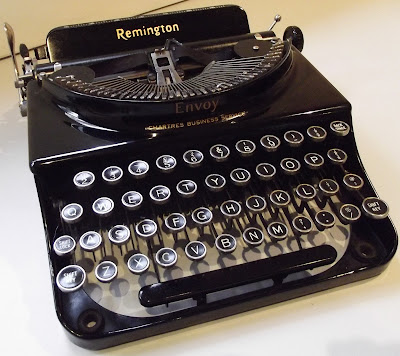 Christie-Miller's inclination toward Remingtons may have, in the late 1930s, led to him acquiring one of these Remington Envoy Type I portable typewriters - of which, including the DeLuxe Junior, 24,531 were produced between July 1938 and August 1941. 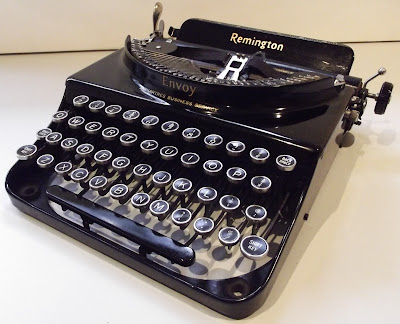 On his The Classic Typewriter Page look at Remington portables (http://site.xavier.edu/polt/typewriters/rem-portables.htm#envoy2), Richard Polt tell us that "the Envoy name appeared on typewriters with two different body styles. The first type looks much like a DeLuxe Junior. Specimens known to me come from Brazil, France, New Zealand and Britain. Probably this type of Envoy was sold abroad more than in the US."
Chartres Business Service was a major Australia-wide company that imported Remingtons until the 1930s, when Remington assembled its own typewriters in Sydney. Chartres made its own brand of typewriter ribbon. It collapsed with the ban on typewriter imports during World War II. 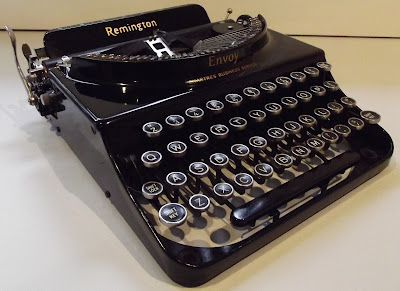 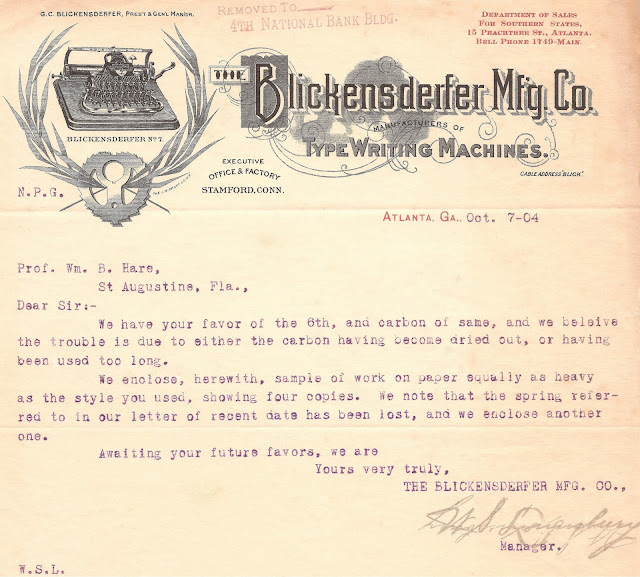 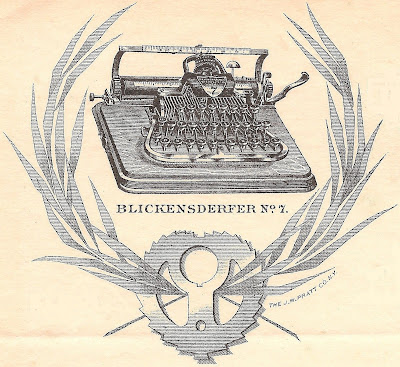 The 1907 Blickensderfer letter is addressed to a “Professor” William Bethea Hare. Hare (March 1852-1913) was a preacher from Alabama whose life’s work was in Florida. In 1879 he moved to Florida but then went to the Southern Baptist Theological Seminary, determined to move back to Florida after his graduation. He served as pastor of the Baptist Church at Sumterville for two years. Because of health problems, Hare had to leave the pastoral ministry and entered the field of education and administration.
He served for two years in the clerk’s office at Sumterville and two terms as Superintendent of Education of Sumter County. He served six years as Superintendent of the State Institution for the Deaf and Blind in St Augustine. At the time of his death he was Superintendent of Public Education of DeSota County.
Hare also worked as a hotel bookkeeper (to help pay for his accommodation in St Augustine, no doubt) and he was editor of a newspaper in Arcadia, DeSota County, in 1910. 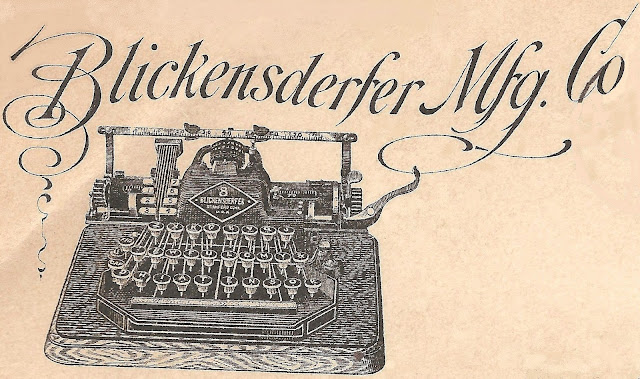 Can't tell you anything about the Reverend Mr Scott, sorry. 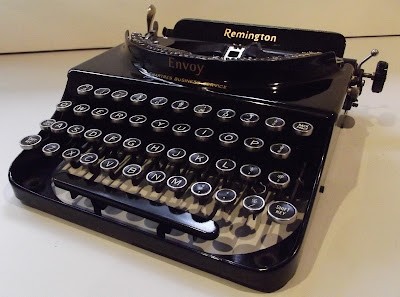 This was typed on a Remington Envoy Type I portable: 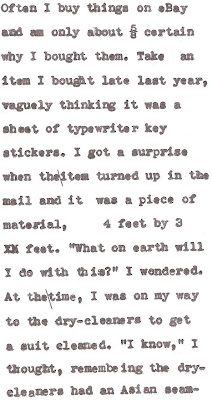 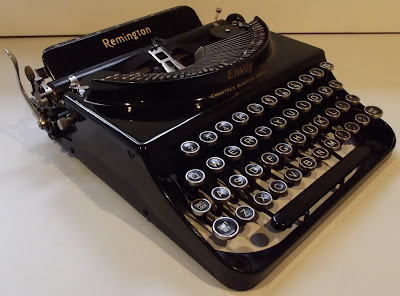 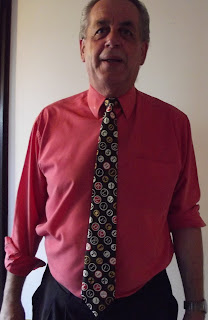 Posted by Robert Messenger at 11:33

Very interesting. That is a very beautiful typewriter. The dangers of Ebay, give me a credit account and no wife and I'd be in worse debt than the government and a house filled with all kind of things I don't need.

Bill, your words of wisdom have come too late to save me, I'm afraid. No wife, debts like Greece's and a house filled to the brim with typewriters! Ah, the joys of bipolar disorder!