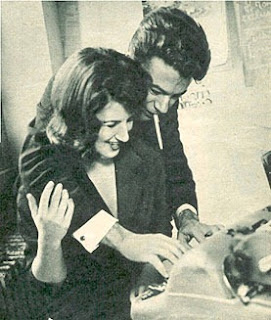 Throughout the long hours and days I put in last November to bring together the incredible story of Remington typewriter heiress Gamble Benedict, I constantly hoped for two things: first, that I would find Gamble was still alive and well; second, that someone close to her would stumble across my blog post and contact me to confirm this. 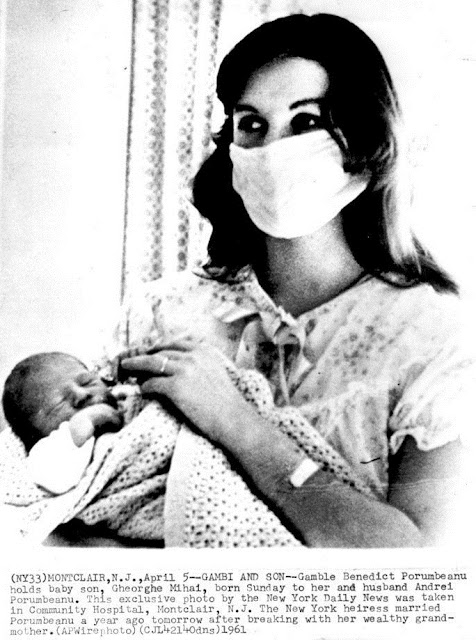 Those wishes came true this week when George Michael Gallagher, Gamble's son by her first husband, Romanian-born chauffeur Andrei Porumbeanu, contacted me through this blog to say, "Thanks for doing this post. It is fun to read about my mother's past." Gamble, 72, now lives in Hershey, Pennsylvania. Goodness, won't it be fabulous to meet her and talk to her about her fascinating life?
Gamble and her brother Doug were the main beneficiaries of the fortune amassed by Remington typewriter pioneer Henry Harper Benedict. After her headline-grabbing three-year marriage to Porumbeanu ended in 1963, Gamble married New York cop Thomas F.Gallagher.

Henry Benedict was president of Wyckoff, Seamans & Benedict from 1895 and president of the Remington Typewriter Company from 1902 to 1913. Until his death in 1935, he remained the largest stockholder in Remington.

His grand-daughter, Gamble Benedict Sharpe, was born in New York on January 15, 1941. Porumbeanu (born January 27, 1925) meet her in May 1959.  In the early hours of December 27, 1959, Gambi escaped her "gilded cage" in Manhattan and on New Year’s Eve she and Porumbeanu boarded a Norwegian freighter headed for Antwerp. In Paris on January 22, 1960, Gambi was taken into police custody and the next day faced a juvenile court and was flown back to the US. 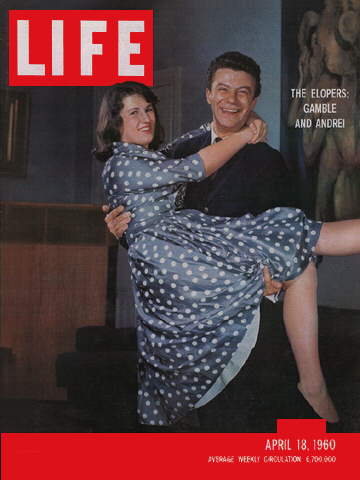 Yet again Gambi managed to elude her minders and she and Porumbeanu were married in Hendersonville, North Carolina, on April 6, 1960. On April 2, 1961, Gambi gave birth to George Michael in Montclair, New Jersey. But on October 7, 1964,  Gambi was granted an annulment. Gambi and Gallagher  were married on July 1, 1965. Porumbeanu died in New York in 1988. 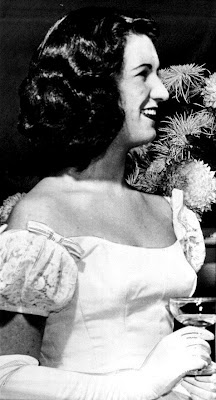 CORRECTION: George Gallagher pointed out that Cortney (correct spelling) Gallagher is his sister. I had been led to believe Gamble had given birth to four sons, two by Porumbeanu and two by Gallagher.
Posted by Robert Messenger at 00:36

Living history - you writes it! (:

So glad the hard work paid off, congrats on this fantastic find

Neat! Hello, Gamble (if you read this), I hope the rest of your life so far has been successful and happy!

Hi Carrie. If you contact me via email I may be able to help you. Robert M

My grandma is very much alive and is doing very well. Im her granddaughter noelle benedict she lives in hershey pa with her new husband (my stepgrandpa) sam :)

Hi Noelle. Great to hear from you and to get updates on Gamble. I have been in touch with George and also Greg now, and hope to be in contact with your grandma soon. Is Cortney your mother?

I enjoyed reading about Gamble and delighted to hear she's well and still in PA. I grew up on the outskirts of Hershey and knew Gamble & Cortney when we were members of the Hershey Figure Skating Club. Two beautiful and kind ladies. I had the pleasure of meeting some of her family as well. I live in Arizona, but would definitely love to see them on a return trip back home to PA. Kind regards to both Gamble & Cortney.

I am a niece of Gamble B and Tom Gallagher. I just learned that Gamble's daughter, Cortney passed away last night. I am trying to find out if Gamble is still alive. I know she was as of 2013 but can you tell me if she is still living?

I am a niece of Gamble B and Tom G. I just learned that Their daughter, Cortney, died last night. Very sad and I am trying to find out if Gamble is still alive. I know she was as of 2013.

I am the niece of Gamble B and Tom Gallagher. I just learned that Cortney, Gamble's daughter, died last night. It is very sad and I am trying to find out if Gamble is still alive- I see she was as of 2013.

Joni Hannah, I'm afraid I don't think I can help much, from memory the only communications I have had with the family is through comments to this post. I will check to see if I have any email addresses, but doubt it.

Joni Hannah, you will need to email me for me to be able to help. I hope you have read the comments above.

I have a contact number and address for Gamble Keiffer.

Joni, Gamble is still alive and living in Hershey. I saw her at Cortney's funeral. I was Cortney's best friend through grade school. Hopefully you can contact her!

This is George Gallagher. Yes, my mom is alive and well in Hershey PA. She very busy being a grandmother to many children... :-)

this is her granddaughter typing
Yes she is living a good life :)

Hi I am one of her grandchildren she is doing very good although she is in a nursing home.