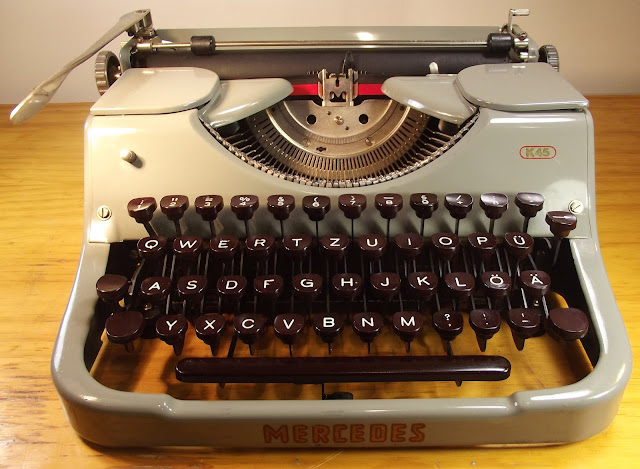 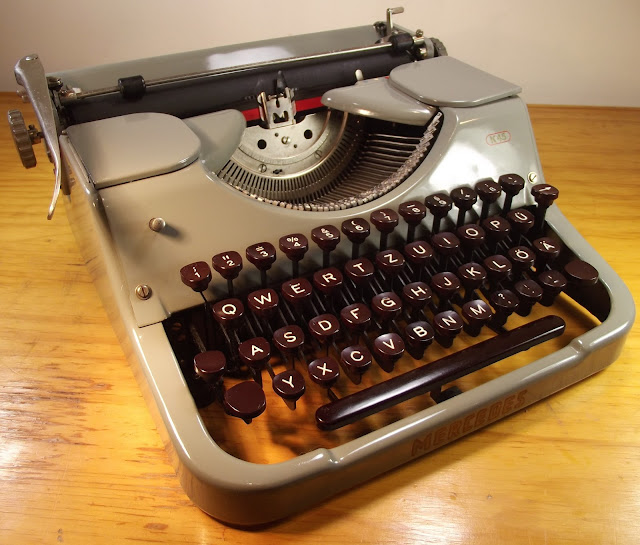 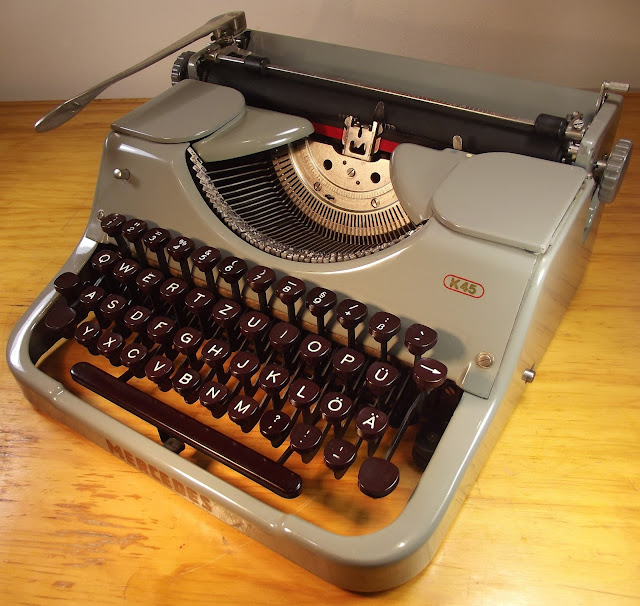 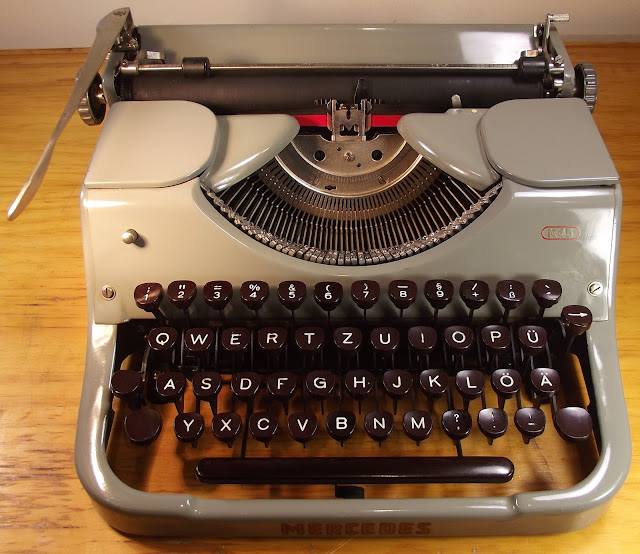 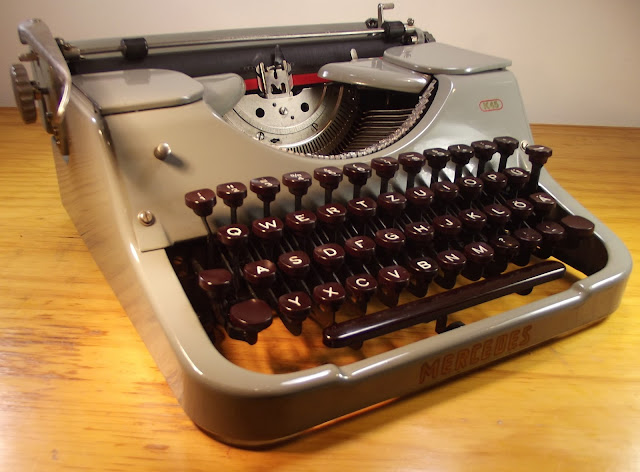 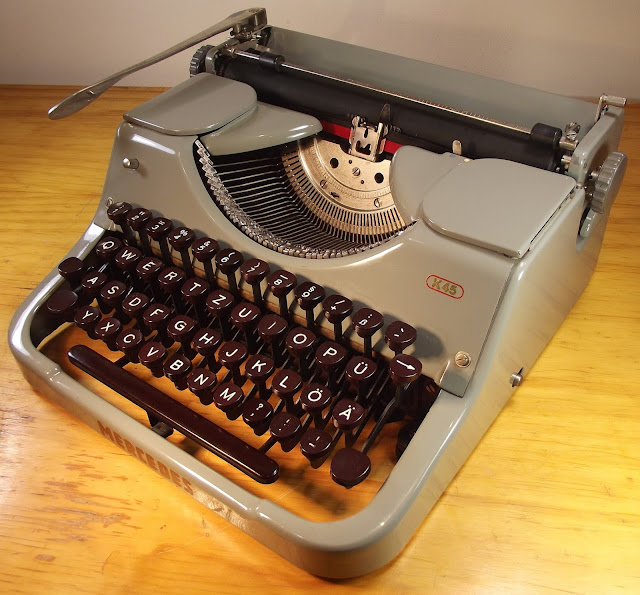 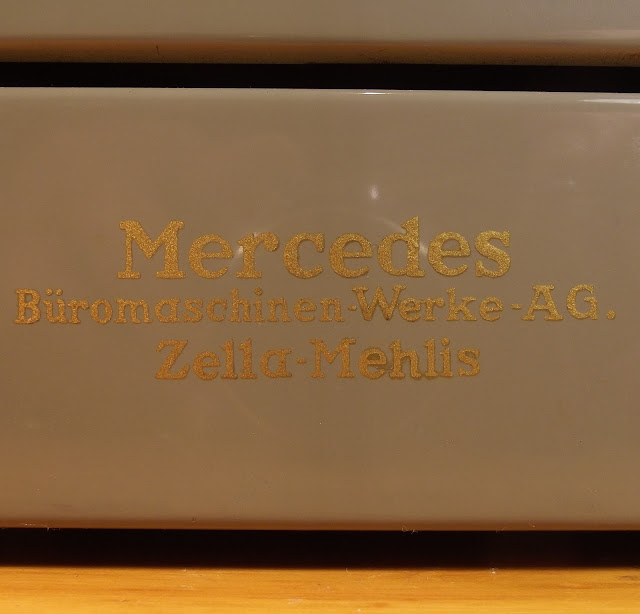 The Typewriter Serial Number Database is a bit confusing on the K45. It indicates the K45 is the Mercedes Superba and that production started in 1936. The K45 is, in fact, a direct descendant of the Selecta, which was first produced in 1934. Leonard Dingwerth's Die Geschichte der Deutschen Schreibmaschinen-Fabriken, Band 1, states the K45 first emerged soon after production resumed following World War II. Dingwerth writes, "Since Thuringia was part of the Soviet zone of occupation ... the Mercedes works was an American property under the special protection of the government of the USSR. The small typewriter Selecta K45 was produced in the first years after the war at Mercedes." Ernst Martin's Die Schreibmaschinen und ihre-Entwicklungsgeschichte was published in 1949 and doesn't mention the K45, which would support the notion the K45 is a post-war model.

Posted by Robert Messenger at 02:25

I believe the term "special protection" refers to the fact that the business was American owned, and therefore the USSR decided not to take it over as they did everything else in the GDR, but rather allowed it to continue under foreign ownership. Which apparently only went until about 1952. Underwood-Elliot-Fisher retention of Western rights to the mark "Mercedes" resulted in the (much later) oddity of having Olivetti pattern machines carrying this name; I believe one of these is on eBay right now. There are also Antares pattern machines which bear that name as well, if I recall correctly.

The Antares pattern Mercedes, one of which I own and have posted on, is an absolute horror typewriter - the less said about it the better. I must take a look at the Olivetti pattern Mercedes.
I included that Dingwerth paragraph because I took it to mean the Soviets allowed Underwood to retain ownership of the plant under some special arrangement. I must admit it sounds highly unusual.

Check here:
http://typewriterdatabase.com/mercedes.32.typewriter-serial-number-database.
I've just now updated the Mercedes page to reflect information from Schramm 1962 (Source #24), which adds much more information than Schumann had access to. It verifies Schumann's numbers and model names exactly, though.

I will probably make a blog post about my update and show the relevant section of source #24.

also, the new numbers from schramm 62 indicate that your serial #271214 would have been one of the last ones made in 1959

Thank you so much for this Ted. It seems a big jump from 230000 in 1951 to 271214 in 1959, though production no doubt slowed down a lot. And as for numbers and model names, Schumann linking the K45 with the Superba is not correct, though he does not mention the Selekta at all.

I've posted the relevant section of Schramm '62 along with my reasoning for thinking that the K45 is a Superba and the K50 is the Selekta.

I don't have access to either of your sources, so I can't verify what they say, but Schramm seems to be pretty clear on which one is which, in both the 1955 and 1962 editions. (:

If it is wrong, please let me know for sure and I'll switch it if you can show something like a User's manual with the K45 listed as the Selekta or something like that.

Ted, I would change if if it were you. Unless you can find such a thing as a Mercedes K50 typewriter. I can't. The visual evidence overwhelming says the Selecta became the K45. The Superba is a completely different looking typewriter to the Selecta/K45.