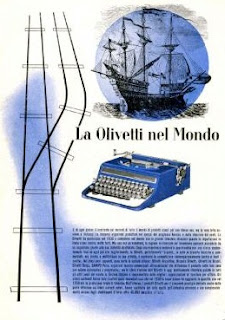 Marcello Nizzoli’s famous 1956 Olivetti trademark, of a continuous line wrapped in a spiral, was hugely symbolic. 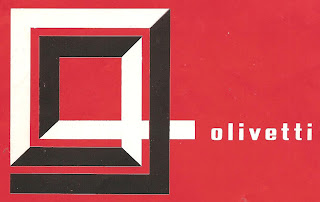 At the time Nizzoli came up with the enduring logo, in the company’s 48th year, Olivetti had circled the globe and was beginning to tighten its grip on the international typewriter market. “The Olivetti in the World” ran the late 1930s advertisement for the Studio 42 (above). Olivetti was not just in the world, it had the world covered. By the time it celebrated its half-century, in 1958, it had established these factories and branches beyond Italy:
Factories:
Barcelona 1929
Buenos Aires 1932
Glasgow 1947
Johannesburg 1949
Branches:
Brussels 1930
Paris 1939
Vienna 1949
Mexico City 1949
New York 1950
Sydney 1952
Bogota 1953
Frankfurt 1953
Toronto 1955
Caracas 1956
Havana 1957
Copenhagen 1958

A year later, in October 1959, Olivetti bought a controlling 69 per cent interest in Underwood. This gave it added factories in the US, Canada, Germany and England, as well as a staff of 10,000 to supplement its own 24,700 workers. It was the first step towards what was the become, in the manual portable typewriter world, virtual domination.
When Wilfred Beeching published his updated Century of the Typewriter in 1990, he listed Olivetti’s control as extending to Adler, Triumph, Royal and Imperial, all of which had previously been owned by Litton Industries, as well as Hermes (the last model Babys, below, were made by Olivetti in Brazil, and also marketed as the Lettera 82). 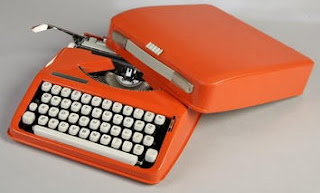 Of the major 20th century brands, that left only Olympia and Smith-Corona as independent of Olivetti – though by then, of course, SCM’s output had dwindled to a fraction of what Corona had started out making in 1912.

Beeching went on to make the point that “Olivetti assemble many products in South Africa and South America, and are represented in almost every country. They owe their place in the office equipment world to their founder, and to a far-sighted policy towards product development and staff relationship. They are quite unique in both the advertising and presentation of their products.”

Yet at its beginnings, in the town of Ivrea in October 1908, Olivetti learned to walk very slowly and very deliberately before it ever set out to run. Its founder, Camillo Olivetti, was determined to prefect his product before he would think about trying to sell it widely. In 1923, Camillo told the editors of A Condensed History of the Writing Machine, “The Olivetti policy is to develop a sound business in few countries where the product can be appreciated, and not to scatter few machines everywhere.”
A Condensed History recorded, “Besides Italy, where they have branch houses and agents in the whole country, they have done good work in Belgium, Argentina, Egypt and Holland, and a few other countries. The result is that all of the output of the factory, which is naturally not as large as many other concerns, is oversold; this is the only reason why the Olivetti people have not endeavoured hitherto to push their commercial organisation further afield, but the Olivetti nevertheless is a typewriter product which is destined to occupy a highly important place in the industry reviewed in this historical compilation.”
How right this publication proved to be. 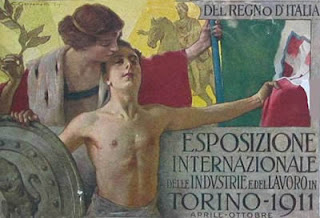 Notwithstanding Camillo’s assurances about a tentative but steady start, he had followed his April 4, 1909, and May 24, 1910, patents in Italy for his first typewriter, the M1, with a US patent dated May 23, 1911. He was already looking ahead, less than a month after first putting the M1 before the public, at the Turin World’s Fair. Soon he had also taken out patents for France, Germany, England, Austria and Switzerland.

Olivetti’s first branch office was opened in Milan in 1912, with two salesmen, a clerk and a mechanic. The machines were delivered on a tricycle. The following year Olivetti expanded to Genoa, Rome and Naples. But already, in that immediate pre-World War I period, Olivetti, according to its own official history, was conscious of being “still hampered by a widespread prejudice against Italian products.” 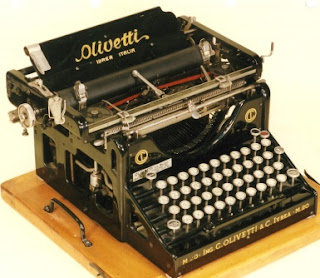 After the war, Olivetti quickly got back on its typewriter-making feet, launched a new model, the M20 (above), and exhibited at the first Commercial Fair in Brussels, in April 1920. That same year, Olivettis reached Argentina and Ruys was awarded exclusive distribution rights in Holland. In 1928, Camillo initiated a Spanish venture with Giulio Capara which led, the next year, to Olivetti setting up its first allied foreign company, in Barcelona (S.A. Hispano Olivetti, which started to make M20s and later M40s, prochure below) in 1930). 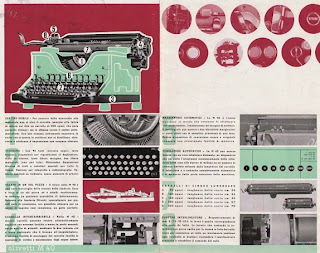 Also in 1929, Camillo travelled to Argentina to extend Olivetti’s operations in South America, and in 1932 S.A. Olivetti Argentina superseded the sales office in Buenos Aires. The disastrous financial events which spread throughout the world from Wall Street at this time did not impede Olivetti. Camillo’s son Adriano wrote in the company’s annual report that “by the end of 1933, our battle against the world depression was won”. Indeed, in 1932 Olivetti changed from a partnership to a joint-stock company, with capital of 13 million lire (reaching 19.5 million lire in 1938, 23 million lire in 1930, 30 million in 1942 and 120 million in 1947 – almost a tenfold increase in 15 years. In 1948 it was increased to 600 million, in 1949 doubled, and in 1954 tripled to 3.6 billion.). And in 1933, celebrating its 25th anniversary, Olivetti proudly noted it had 13 branches and 79 distributors in Italy, as well as representatives in Egypt, Tunisia, Argentina, Brazil, Bolivia, Chile, Ecuador, Syria, the Aegean Island, Albania, Austria, Belgium, Czechoslovakia, Denmark, France, Yugoslavia, Norway, Spain, Sweden, Turkey and Hungary. 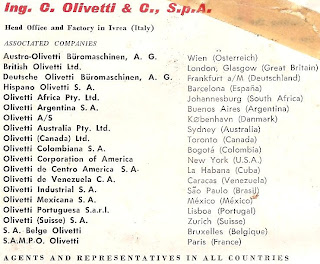 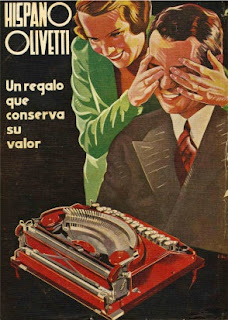 One major setback came on August 6, 1944, with the shooting and hanging of Guglielmo Jervis, an Olivetti engineer who was commander of the Ivrea Partisans. An ICO factory National Liberation Committee, which included Jervis, had been formed on September 11, 1943, the day after the Nazis occupied Rome and three days after Italy’s surrender to the Allies. “Olivetti men are the [committee’s] moving spirit,” the company’s history states; 24 Olivetti workers were killed in “the struggle for liberation”. In October 1944, a Nazi plan to destroy the Ivrea factory was foiled by Olivetti employees. The plant at Apuania was destroyed.

Full production and exports were resumed in 1945, and the next year 600 machines were sent to Argentina, as well as more to Uruguay, each shipment through New York. 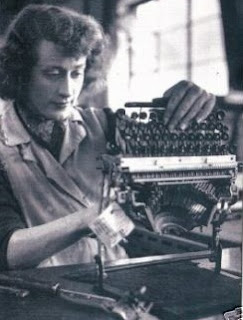 Perhaps one of the most significant moves by Olivetti was into Britain in 1947. A London company was established and, at the invitation of the British Government, Olivetti brought employment to an economically depressed and war-devastated Glasgow. By the end of the decade, vast numbers of Nizzoli’s Lexicon 80 and Olivetti Lettera 22 portable (joined later by the Studio 44) were being assembled at the Scottish factory on the Queenslie Industrial Estate on Clydeside (photo above), each badged as “British-made”. This enabled Olivetti to overcome 1950s import restrictions in British Commonwealth countries such as Australia and New Zealand. 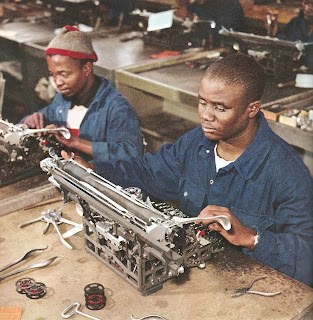 Coincidentally with the British move, Olivetti formed companies in Mexico and South Africa (where, though apartheid had just been introduced, Olivetti gave non-white workers the rare opportunity for meaningful, well-paid employment in Johannesburg - photo above). From Mexico, Lettera 22s relabelled as Couriers for Sears Roebuck were shipped into the US (photo below), opening up the biggest typewriter market for Olivetti for the first time. The Olivetti Corporation of America was established in New York in 1950. 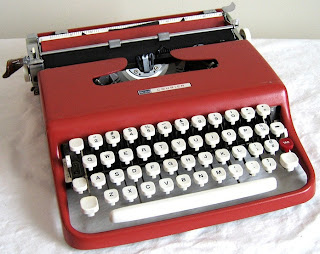 Olivettis reached Australia at the time of the Studio 44’s debut in 1952 and the company managed a major coup with the organisers of the 1956 Melbourne Olympic Games. When the Organising Committee found itself unable to employ staff to handwrite several thousand participation diplomas, Olivetti offered to make a special typewriter with a suitably-sized (3/16th of an inch) cursive typeface to do the job (photo below). This was the first recognised support for an Olympic Games by a typewriter company and led to Olivetti also supplying typewriters to organisers and for use in press centres at subsequent Olympics in Rome (1960), Tokyo (1964) and Mexico City (1968). 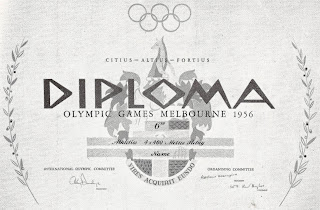 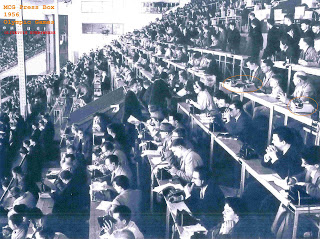 Olivetti could afford to be generous with its machines. By 1958, its 10 factories around the world were churning out 6.2 standard typewriters a minute! 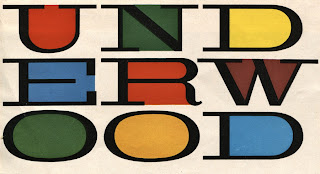 Olivetti’s massively expensive takeover of Underwood in 1959 was its most significant international acquisition. Afterwards, most Olivetti models were rebranded as Underwoods, while the link with Sear continued. This allowed Olivetti to get a considerable and permanent foothold in the US, a marketplace it had cherished from its earliest days. 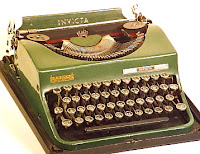 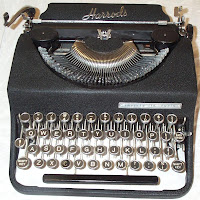 The takeover was the real culmination of the company’s huge worldwide growth. It had begun taking over other typewriter factories in very much a local way, in the early 1930s, at the time it entered the portable typewriter market. The first was Invicta of Turin (later model MP1s were also sold as Invictas, and as Harrod’s of London typewriters) and Olivetti’s tentacles later spread to Antares and Everest in Milan. 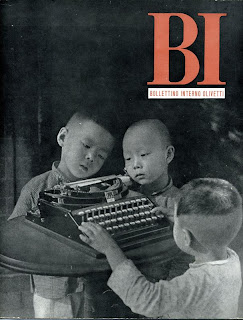 But the world was in its sights from the time Adriano Olivetti took control of the company from his father. And by 1980s, ironically at a time when the portable manual was being phased out, this diminishing typewriter world was Olivetti’s. 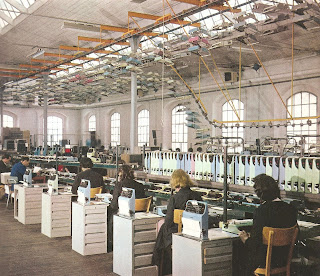 Posted by Robert Messenger at 13:26

One footnote to the grim wartime chapter. Olivetti produced a no frills "war version" of the M40 which is found fairly often on German eBay labeled "M40 Kr." (Kriegsausführung, war version). So the Nazis were benefiting from the Olivetti factory before they turned against it.

Global expansion was impressive... perhaps they overreached and then the technology became obsolete. I wonder why they couldn't continue to innovate.