Typewriters For Sale: Near and Far (From Reach)

When I lived in Dublin in Ireland, I used to love that song, "Grafton Street's a wonderland, there's magic in the air." For typewriter lovers, eBay has become a constant wonderland, though perhaps with not so much magic in the air. But, as they say in the classics (or was it former typewriter-wielding Yorkshire Evening Post junior reporter Mark Knopfler and Dire Straits?), "So near and yet so far away").
Happily, I have a Fox 24, in beautiful condition, and was uplifted to see this one fetch a princely $US812 on US eBay: 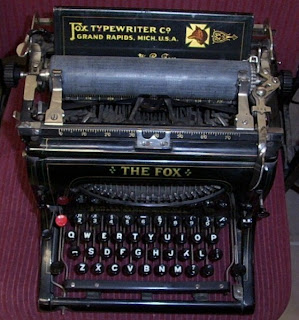 I'm still hanging out for a Fox portable though. This one went for what I can only consider a very reasonable $US287: 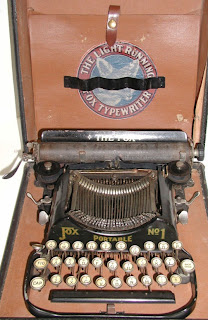 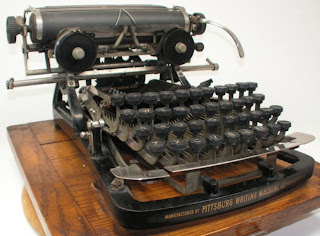 Or this Mignon 2 from Portugal: 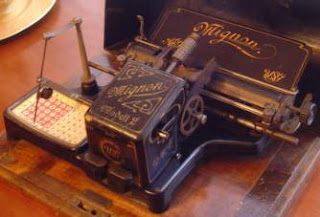 As an inveterate eBay typewriter buyer of some years experience (and probably, by now, with about 1400 typewriter and typewriter-related purchases to my credit) I remain utterly mystified by people who bid early on eBay items. All they succeed in doing is push the price up. Do they think it's like a house auction? Unlike New Zealand's Trade Me, eBay auctions end when the time is up, not before, not after. There has to be some logic in why they do it, but it's beyond me.

My dear friend Georg in Switzerland, noting my laments over a Toshiba Japanese language typewriter offered for sale on Australian eBay, alerted me to one on German eBay, listed by a Japanese seller. Thanks, Georg, I did watch the item, but again it was beyond my reach. It sold for $A298, or 225 euros: 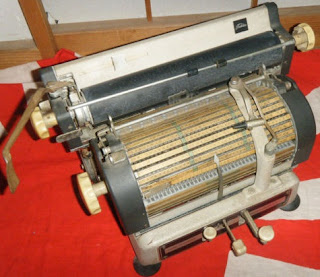 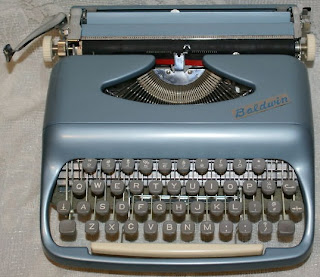 A real "steal" had to be this Remington portable which fetched a mere $US28.00: 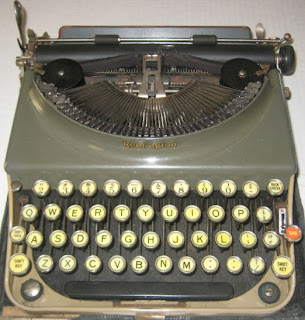 But getting back to variations: One that has a range of names is this Royal with the vinyl faux woodgrain surface. The only thing about it which makes it vaguely interesting is the transistor radio in the case. There was also an Imperial version of this - I had one and gave it away to Richard Amery, to add to his vast Imperial collection as a curiosity: 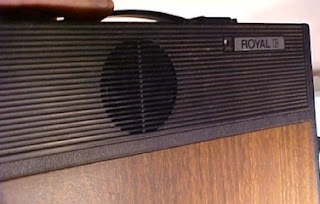 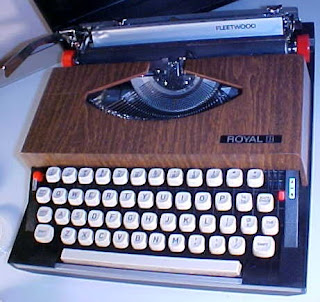 These had a variety of model names, including Fleetwood and Silver (as in Silver-Seiko) and ... wait for it ... SWINGER! (maybe inspired by John Updike's Couples?): 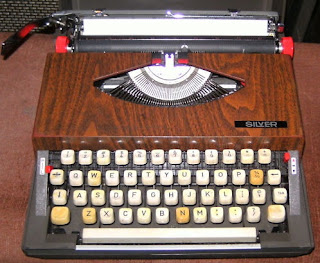 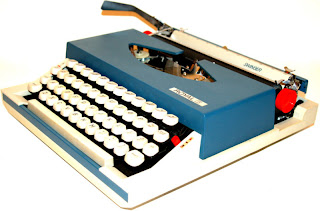 On the subject of swinging names, here are some further variations of British-made Coronas, this lovely Caribbean blue Calypso and another of the Skyriter-Empire-Hermes Baby hybrids: 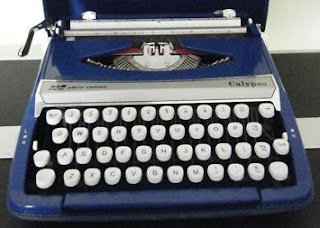 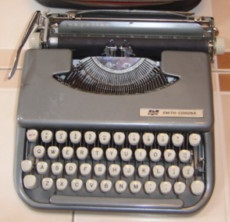 This Maritsa-Princess was listed as an Exemplar 300: 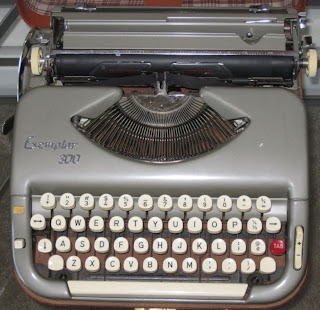 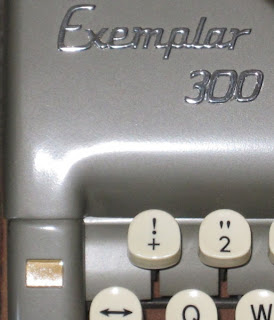 But here's one listed today on Australian eBay which had me been completely baffled, until I checked on Wim Van Rompuy's typewriter.be website. To me it looked like an early Hermes 2000, perhaps, and Wim confirms Rufs were made by Hermes. And on further investigation, I find Georg appears to have one just like this: 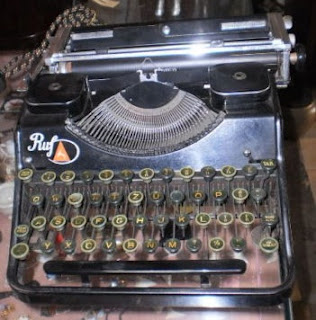 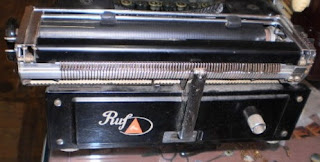 On Will Davis's Portable Typewriter Reference Site, he has Australian pages which include this Imperial 34 I once briefly owned. Confirmation that it is indeed an Erika/Optima from the East German Robotron factory comes with another machine listed today: 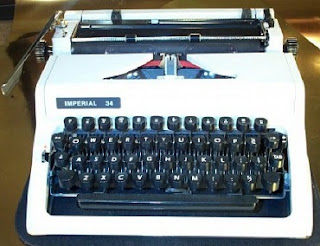 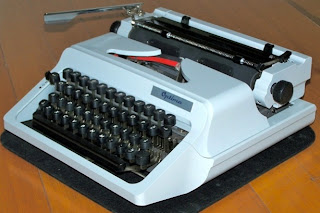 Here's another Erika-Optima variation, an Aztec 600: 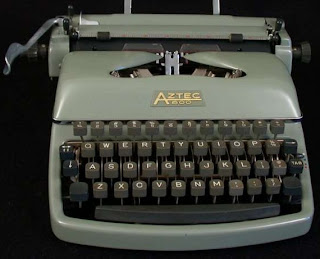 One typewriter model name we do know was inspired by a book is the  Good Companion (from J.B.Priestley's work of the same name). And mention of Imperials brings me to this model "6T" on British eBay. There are at least eight models of the Good Companion that we know of, including the second, the Model T, but I hadn't previously seen a "6T": 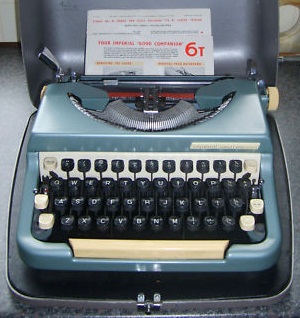 Here's another nice IGC, this time a 5, on British eBay: 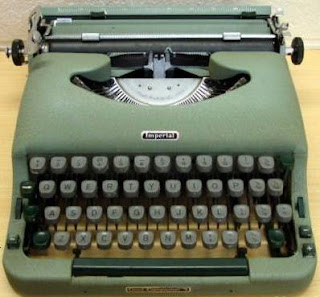 Finally, also on British eBay, a Brother, but for all the world a Nakajima ALL. Is that possible? Richard Amery will know: 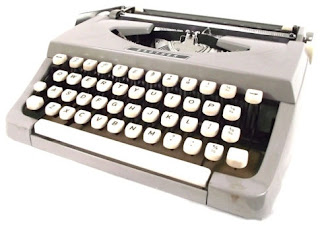 Of course, one of the fascinations, at least for me, in looking at typewriters on eBay is seeing the variations of better known brands come up for sale. Take, for example, this Consul which was listed as a Baldwin (Will Davis's website explains all about these relabelled machines) and sold for
Posted by Robert Messenger at 12:51

I'll just leave this here in case you haven't heard it:
http://youtu.be/_cWutmOw85E

those little british SCM's are good machines. I have a scipt one that I really like to use.

I was "watching" the 6T. I have a lovely Imp GC Mod 5 but was taken by the pamphlet with the 6T.

Agree, WHY do buyers bid so early? Or DO they? I often suspect there's colaboration between a seller with two or three accounts. But even more baffling are the fairly ordinary machines in pretty bad shapwhich the sellers insist are rare and that bidding should start at £70. Maybe it is a kind of angling?

Thanks for sharing Robert, and interesting: this is the proof that Hermes typewriters were fitted as "Ruf" machines early on. I have a later adapted Hermes 2000, and it seems that most if not all typewriters of the Hermes line were adapted for use with the "Ruf" book-keeping system. At some later point (late 1960s?) Hermes Paillard must have owned the Ruf company. A newspaper ad from 1969 shows Ruf as distributor for Hermes Baby machines in Brazil. The "Ruf" group is still in business today, Hermes Paillard is not.