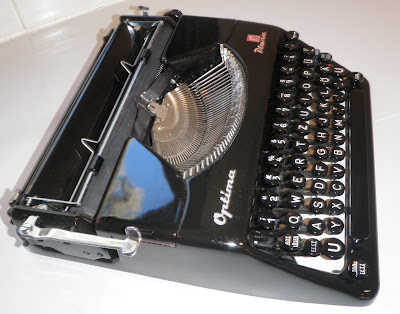 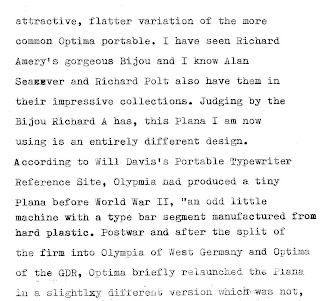 After writing this, I did a bit more searching and found a few of these models listed in German and other East European auctions, some with a slightly different arrangement with the decals. One of them sold on German eBay earlier this year for one euro! What a steal!  I also came across a PDF of a history of the Optima-Robotron factory, which said the first model Plana was made from 1939-1950, then this slightly flatter version until 1959. Here is the comparison between the 1939-1950 and 1950-1959 models from the Robotron history: 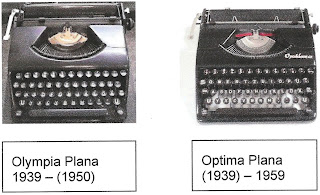 Some more images of my Plana: 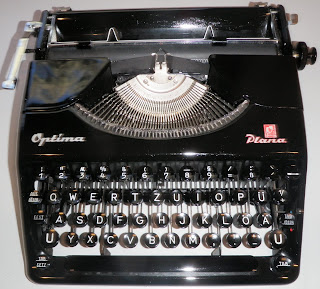 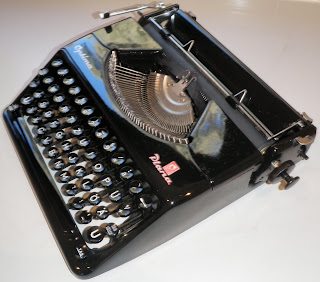 Compare this with the Optima P1 which is, as I understand it, now in Alan Seaver's collection but was in Richard Polt's collection (this is the same model, from memory, as Richard Amery's Bijou). Both Alan and Richard P point out the P1 is "based on the Plana": 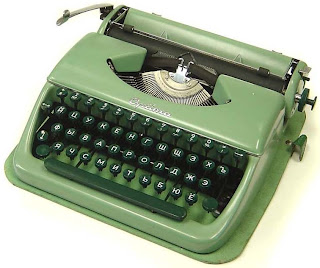 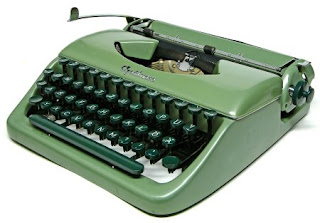 The carriages look identical, at least, and remind me a little of the Rheinmetall. But note on the Plana that the tab set and tab keys are set into the front of the mainframe, adding to the interesting design. Also, the ribbon covers (which are similar in design to the Hermes Baby) are very tightly sprung.
Here is me (very) enviously admiring Richard Amery's Bijou in his kitchen in Sydney last December: 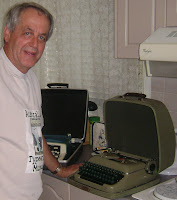 Here are images from the web of the same or similar model Planas to the one I have (do my eyes deceive me or does the bottom one have a slightly sloping front?): 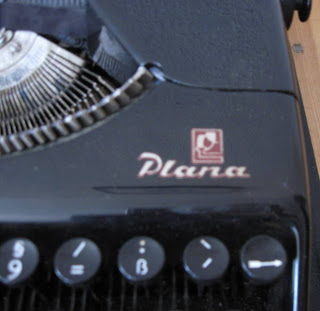 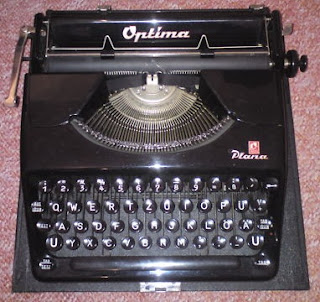 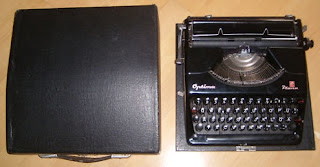 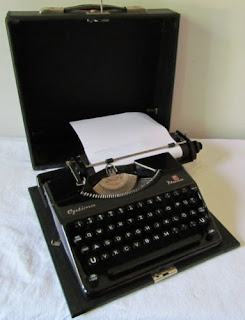 Posted by Robert Messenger at 12:04

The Plana has a beautiful, intriguing design, to my eye. The front-corner control buttons on the Olympia-Plana are very clever (though initially baffling). They are not great typers, but for their size they are good.

The early Planas are made of a bakelite-ish plastic, even the segment (not a great idea).

I passed my first P1 on to Alan because I got a second one, with Cyrillic keyboard. You picture both. It seems to be a pretty rare model. I don't know how the Cyrillic P1 ended up in Florida!

To judge from your photo, Richard Amery's Bijou is not a Plana, but a much beefier machine, a '50s Erika.

By the way, the latest HBw-Aktuell shows a photo of an Olympia-Plana that, on one typehead, includes both the swastika and the SS symbol. Toxic!