The Varityper Typewriter and The Irish in Australia

Took myself along to the National Museum of Australia at Acton in Canberra today to see an exhibition called “The True History of the Irish in Australia: Not Just Ned”. A colleague had told me I must go, if only to see a “wonderful little typewriter”. “I don’t know what it’s called,” he said, “but if you haven’t already got one, once you see it you’re going to have to have one.” 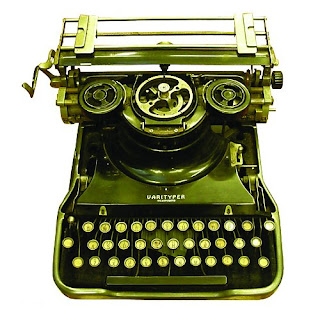 Turns out I’d seen this very same typewriter before, twice. It’s a Varityper. It once belonged to the great Australian novelist and short story writer Henry Handel Richardson (real name – and, yes, she’s a woman: Ethel Florence Lindesay Richardson. Richardson used a male nom de plume in the same way another great Australian woman writer, Stella Maria Sarah Miles Franklin – whose Corona 3 I own - wrote under the name Miles Franklin). Richardson's Varityper is pictured above, with the presentation of it in the State Library of Victoria in Melbourne below. 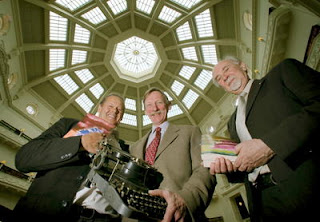 I’d first seen Richardson’s Varityper in the State Library of Victoria while I was there two years ago to see a very interesting exhibition called “Independent Type”. I was acquainted with the Richardson Varityper a second time when I gave my two typewriter presentations at the State Library in February.

The “Independent Type” exhibition included a few other “famous” typewriters, including the little Japanese-made Royal with which an Australian couple, English-born Tony Wheeler and his Northern Irish-born wife Maureen, started writing the Lonely Planet series of books(with Across Asia On the Cheap) on a kitchen table in Sydney in 1973 (Richard Polt, I believe, was once, briefly, a series contributor). There was also an Olivetti Lettera 32 which was used by the great Australian playwright David Williamson. 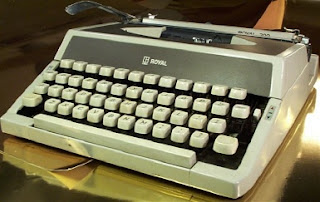 In light of what’s been written about “last typewriters” in the Typosphere in the past few days, some of the online comments about the “Independent Type” exhibition are interesting to look back on. One visitor asked, “Is it just me, or does seeing the actual typewriter used by Henry Handel Richardson feel a bit more romantic than seeing the laptop Peter Carey used?” To which “LiteraryMinded” replied, “The laptop is CHUNK. Typewriters will always be more romantic.” Another comment was: “Henry Handel Richardson's typewriter ... Treasure.” Carey’s laptop, by the way, was the one on which he wrote 20 drafts of The True History of the Kelly Gang (a novel from which the National Museum has stolen, Kelly-like, the title of its Irish exhibition). 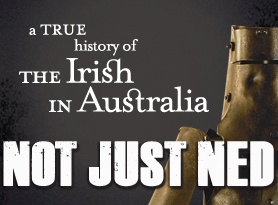 Anyway, getting back to Richardson’s Varityper at the National Museum (where it’s on loan, of course, from the State Library of Victoria). What’s it doing in an Irish in Australia exhibition? Well, it turns out Richardson’s most famous novel, The Fortunes of Richard Mahony, is based on the real-life experiences of her Irish-born father, though she was only nine when her father died. This three-part novel, the first part of which was published in 1917, includes Australia Felix, The Way Home (1925) and Ultima Thule (1929). 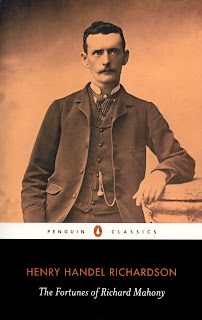 Ethel Richardson was born in Fitzroy, Melbourne, on January 3, 1870. Her father, Walter Lindesay Richardson, was a Dublin-born obstetrician and “Ethel laid great stress on her Irish origins and often said she was Australian by accident” (according to the Australian Dictionary of Biography). Walter was a friend of Alexander Brooke Smith, “who played a comic part in the demise of the Kelly Gang”. Soon after Ethel’s birth, Walter entered a private asylum and was then committed to the Yarra Bend asylum in Victoria, where he was diagnosed as suffering from general paralysis of the insane (incipient), eventually recognised as a late manifestation of syphilis - although this diagnosis is now in question, and it is believed Richardson suffered from dementia. But there is no doubt Ethel described “Richard Mahony” as suffering from what she believed to be GPI, and that she believed it to be a tertiary stage of syphilis.

The Fortunes of Richard Mahony is regarded as Ethel’s masterpiece. But critics say it “has been too often taken to be a faithful account of the life of her father as a victim of personality defects, instead of a brain infection". Her husband, John George Robertson (who she married in Dublin), remarked that in drawing Richard Mahony's portrait, Ethel was really drawing her own.

Still, Ethel declared once that a writer usually had all of his or her material by the age of 10. The horrifying circumstances of Walter's illness and death and the permanent sense of insecurity inflicted on Ethel marked her personality and her work. Ethel died in Hastings, England, on March 20, 1946. Her writing desk (below) was two years ago acquired by the Chiltern Athenaeum Museum in Victoria. 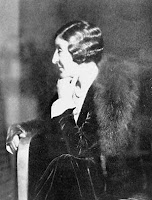 The Australian Dictionary of Biography says Ethel’s The Fortunes of Richard Mahony “is an archetypal novel of the country, written about the great upsurge of 19th-century Western capitalism fuelled by the gold discoveries. With relentless objectivity it surveys all the main issues which were to define the direction of white Australian society from the 1850s onwards, within the domestic framework of a marriage. Powerfully symbolic in a realistic mode, it is, as an English critic said in 1973, 'one of the great inexorable books of the world'.” It was highly praised by Sinclair Lewis, among others.

In case some are wondering about the title of the National Museum exhibition “Not Just Ned” (it most interestingly includes a full set of Kelly armour), and my references here to Ned Kelly (above), I should explain that Kelly and his gang were Australian bushrangers between 1878-80. Kelly is "Australia’s Robin Hood", a folk hero and a symbol of Irish-Australian resistance against oppression by the British ruling class for his defiance of colonial authorities. He has often been lionized (including by Carey) and at this time of a royal wedding, is being held especially close to many Australian hearts as a representation of the dream of an Australian republican. For the time being, however, we continue to embarrass ourselves by having a Union Jack in the top left corner of our red-white-and-blue so-called national flag. As Kelly said on the gallows, "Such is life". 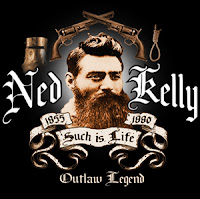 The Varityper typewriter, of course, is a later variation of the Hammond. Rather than go into any detail about it here, I refer readers to Richard Polt’s excellent page about the Varityper on his The Classic Typewriter page website, http://site.xavier.edu/polt/typewriters/varityper.html
The Varityper below is from Wim Van Rompuy's great site, typewriter.be, at
http://www.typewriter.be/varityper.htm 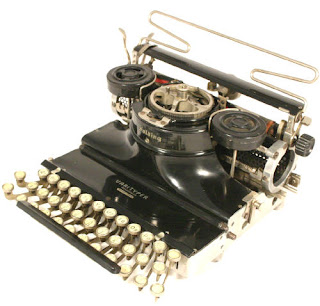 Posted by Robert Messenger at 18:18

Thank you for the very interesting article on the Varityper typewriter. I worked for Varityper from 1980 until 1994 when Varityper ceased operations and PrePRESS SOLUTIONS was formed from the assets of the old Varityper company. I continued at PrePRESS until it was sold in 1999.