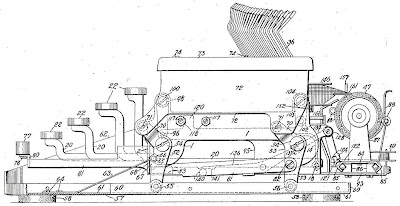 Any lingering doubts there might have been about the remarkable John Henry Barr’s lead role in the revolutionary design for the first Remington portable typewriter can now be safely put to rest. Hitherto, it has largely been assumed that Barr, at the very least, led a team of Remington engineers in designing the portable with its folding typebasket arrangement. It turns out Barr is in fact the designated inventor of this machine, the world’s first four-bank portable typewriter, known for its trendsetting flat profile and geared typebar mechanism. 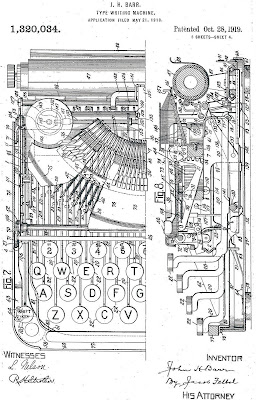 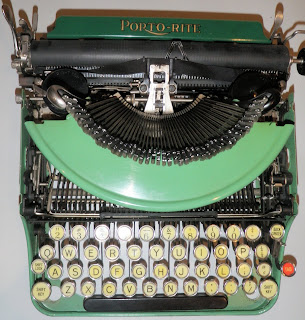 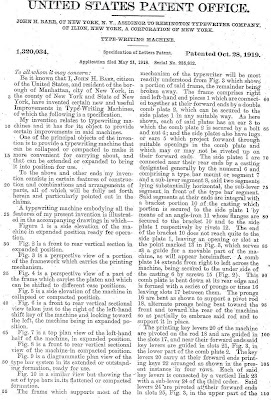 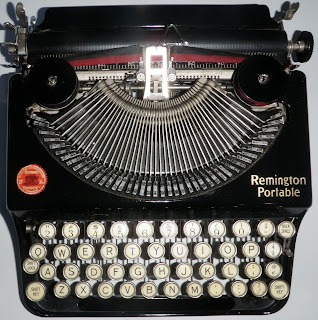 Barr, a professor of machine design and mechanical engineering at , is perhaps more famous for his own typewriter, the Barr, which he produced after he had resigned from Remington in 1923. It is believed Barr tried to interest Remington in this latter design, but failed to impress the company with it, so he left Remington to make it under his own steam (this outstanding collection of Barrs from Herman Price's Chestnut Ridge Museum). 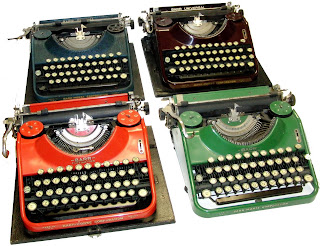 Through research into the Barr typewriter, most notably by Will Davis on the Portable Typewriter Reference Site, Barr’s involvement with the first Remington portable was established. Until then, we only had the word of Remington, which, in the same year Barr left Remington, had told the author of A Condensed History of the Writing Machine that the first four-bank portable was “the work of several Remington engineers”. 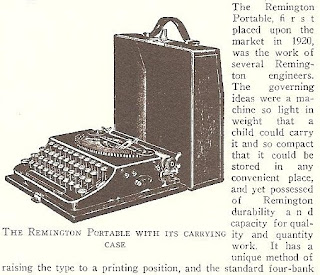 Judging by the patent applications, that does not seem to be the case. The credit should go almost exclusively, if not completely, to Barr. He is, after all, marked down on the patents assigned to Remington as the “inventor”. 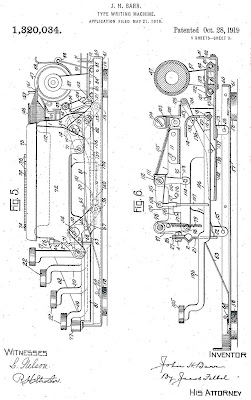 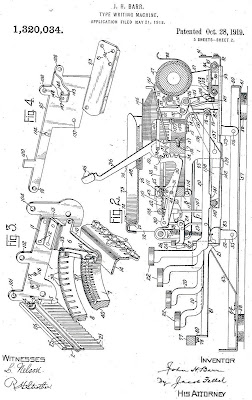 Unlike Lee Spear Burridge, who was four years dead when his Underwood 3 appeared (see previous post), Barr was still very much alive and kicking when the Remington portable went into production. He might well have been kicking when he read the Condensed History and saw that, with his departure from Remington, the manufacturer had withheld his name from any association with the machine. But like Burridge with Underwood, Barr had already assigned a number of patents to Remington. And in this case, again like Burridge, he was obviously determined to meet the Corona 3 challenge with a machine that remained compact without requiring a folding carriage arrangement. 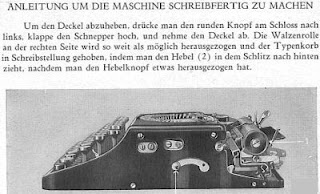 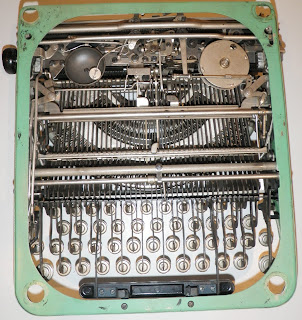 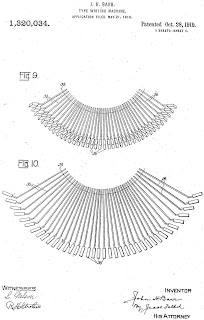 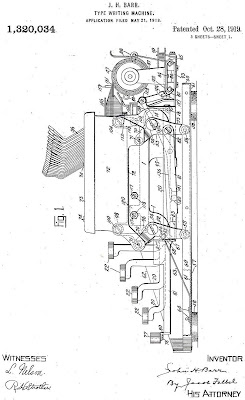 Barr applied for the patent for the Remington four-bank portable on May 21, 1918, and it was granted on October 28, 1919. Almost exactly one year later the machine went into production at Ilion in . On his The Classic Typewriter Page, Richard Polt quotes, with thanks to Ed Neuert, from Vol 1, No 1 (August 2, 1926) of The Remport (a newsletter for Remington portable sellers), in which it was stated, "The Remington Portable was first exhibited at the New York Business Show in October, 1920. Its manufacture began shortly thereafter but for many months only a limited number of machines were available for delivery … the first dealership contracts of record were entered during September, 1921.” 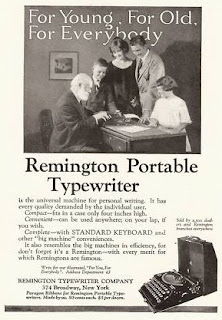 The Remington No 1 ended the 27-year reign of three-bank portables, dating back to George Blickensderfer’s Blick 5 of 1893 and embracing Frank Rose’s Standard Folding (which went into production in 1907, two years after Rose’s death), Otto Petermann’s Corona 3 (1912) and Burridge’s Underwood 3 (1919). The end of the three-bank meant just one shift key for capitals, figures and symbols, and Remington proudly and rightly promoted the Barr design as the first portable capable of everything a standard size typewriter could do. Just as importantly, Barr's invention forced Corona and Underwood to follow suit with their own four-bank portables. 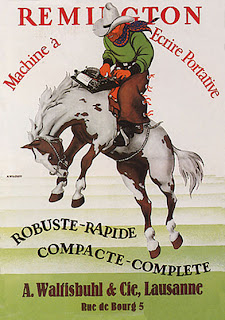 John H.Barr applied for more than 60 patents related to the typewriter during a 34-year typewriter-designing career, which started with Smith Premier in 1903, moved to the Union Typewriter Company in 1909, then to Remington for 10 years from 1913, and finally the Barr-Morse Corporation from 1923-1937 (given his track record, he might have been amused to see Remington put the name Smith Premier on one of his Remington inventions). 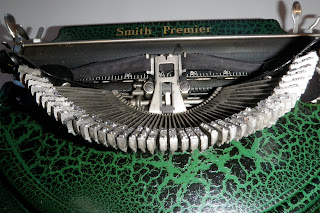 John H.Barr II, the typewriter inventor, died, aged 75, at , where he lived at , on March 27, 1937. He was cremated at . He was survived by three sisters and by his wife, Katherine Louise (nee Kennedy, born January 31, 1863, in Minneapolis) and their son, John Henry Barr III (born Ithaca, July 1890), who at the time of his father’s death was living in Easton, Pennsylvania. 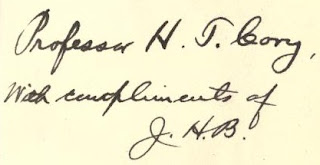 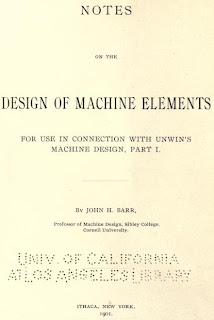 As a youngster, John H.Barr had moved with his family from to , , and Barr received Bachelor in Mechanical Engineering and Master of Science degrees at the , the latter honour in 1883. He also taught mechanical engineering there. From 1887 he studied at the , , and in 1889 won a Master of Mechanical Engineering degree at Cornell and in 1891 joined the faculty as assistant professor of mechanical engineering. Four years later he was appointed associate professor of machine design and was promoted to a full professorship in 1898. He was alumni trustee in 1905 and again in 1915. 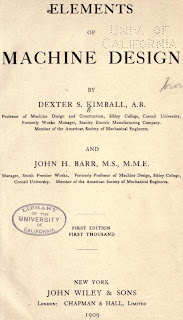 He wrote technical papers and Notes on the Design of Machine Elements: For Use in Connection with Unwin's Machine Design, Part I (1901), which with Professor Dexter Simpson Kimball was expanded into Elements of Machine Design in 1909. In 1905, Barr also wrote the textbook Kinematics of Machinery: A Brief Treatise on Constrained Motions of Machine Elements (revised 1911). Barr was a fellow of the American Association for the Advancement of Science and a member of the American Society of Mechanical Engineers and the Franklin Institute. 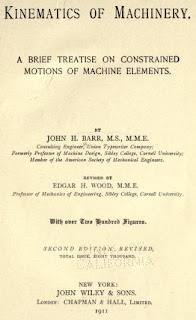 Maybe it was a question of better pay, or simply an overriding love of typewiters: who knows? - but in 1903 Barr resigned from his professorship at Cornell to become a director and factory manager of the Smith Premier Typewriter Company in . From 1909-1913 he was a consulting engineer for the Union Typewriter Company and then from 1913-1923 for the Remington Typewriter Company. 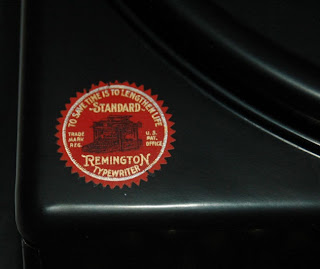 During World War I, Barr was attached to the aircraft armament section of the American Expeditionary Force air service in and was later a major in the ordnance department attached to headquarters in . 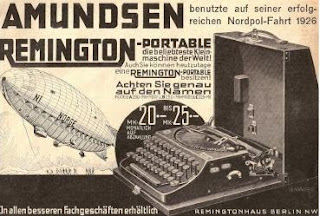 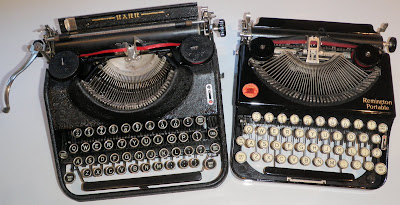 (Barr's two great inventions, above side-by-side, are from my collection) 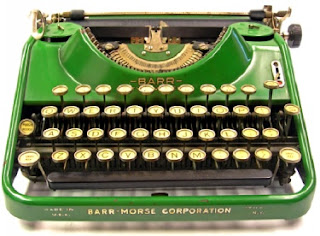 Suffice to say here that Barr’s groundbreaking designs continued with the Barr, patented in 1925-1926, as it incorporated basket shift (like the single shift key on the Remington portable, this was previously only used on standard typewriters) and parallel key action, later adapted by Corona and, in the post-World War II era, by Erika in Germany and the Winsor line in Spain. 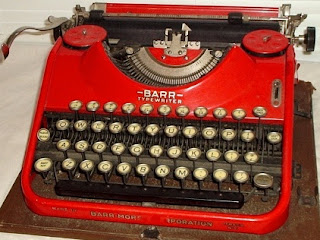 The Barr portable was built at the plant of Morse Chain Company. When Barr died in 1937, the company was sold and moved to .  Production of the machine ended in 1939 and the company went bankrupt. Will Davis says, “It seems certain that no more than 41,000 machines of all variants were built in the US and Canada from 1926 through 1939 …  At this moment [May 2008], 38 machines are verified to be in the hands of collectors or museums. (Thanks to Richard Polt, one of them is in my collection.)

It has been suggested that the Barr lived on, in at least some forms, after World War II. In the mid to late 1950s, a US chain store, which was buying sewing machines from Brother in Japan, encouraged Brother to join the portable typewriter market, since Sears Roebuck and Montgomery Ward were enjoying success in selling rebranded machines. Brother did produce a portable, in 1961, and some suspect the Barr design was part of it. 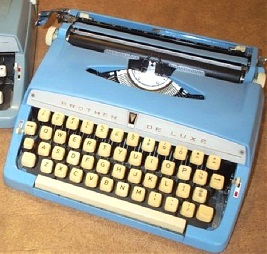 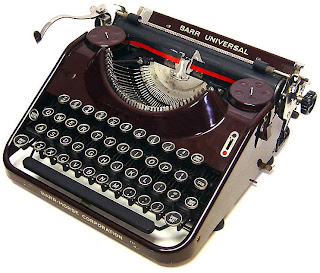 ACKNOWLEDGMENT: Images from the websites of Herman Price, Will Davis and Richard Polt.
Posted by Robert Messenger at 17:54

Thanks! It's very interesting to learn more about the creator of one of the most successful portable typewriters ever, and one of the less successful but still wonderful ones (the Barr).

I think if any Brother design borrowed from the Barr, it wouldn't have been the little one you picture here, but the larger basket-shifted machine, such as the Montgomery Ward typewriter you pictured a little while ago. I don't have one of those so I haven't had a chance to compare it to a Barr.