Why Didn't I Think of That? Weird Ideas in Typewriter History (I)

UNHERALDED GENIUSES, REALLY BRIGHT THINKERS, MISGUIDED IDEALISTS, CRAZY OPPORTUNISTS, OR JUST PLAIN SILLY PEOPLE WHO WASTED EVERYONE ELSE'S TIME?
This is the start of a monthly series devoted to typewriter-related ideas which finished up going absolutely nowhere (or at least they didn't go anywhere to the best of my knowledge. If anyone knows better, please enlighten me.)
No. 1 - THIS MONTH'S PRIZE WINNER IS:
PHILANDER
DEMING
AND THE
TYPEWRITER RIBBON MOISTURISING CHAMBERS 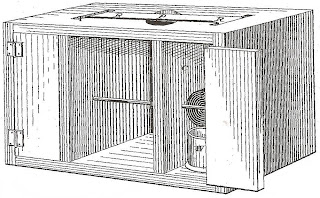 On May 5, 1877, Philander Deming, of Albany, New York, filed an application for a patent for an "Improvement in Ink-Ribbon Chambers for Type-Writers". 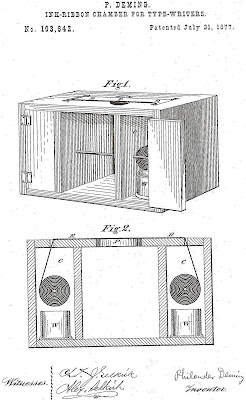 "In the tight chamber," he wrote, "is a cup of water or other moisture-supplying device, by the natural evaporation of which the air in the chamber is maintained at the required degree of humidity.
"The chambers protect the ribbon stored in them from the dust, and from atmospheric changes, and the evaporation maintains the ink upon the ribbon in a moist state, suitable for printing, whereby the printing is rendered more uniform, and its quality is greatly improved." 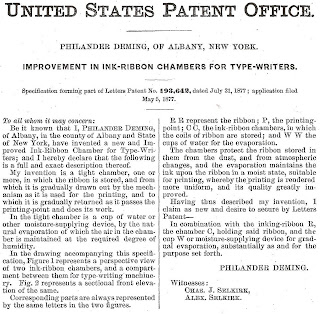 Philander Deming must have been a thorn in the behind for the people earnestly trying to perfect, manufacture and market the first typewriter. No sooner had the Sholes and Glidden started to roll off the production line at E.Remington and Sons at Ilion in New York than good ol' Philander was firing in patent applications to try and improve it. Christopher Latham Sholes might have saved himself a lot of angst if he had enlisted Deming in the first place, instead of James Densmore.
Not that Deming seemed to have any problem with Sholes's QWERTY configuration, he just wanted to make the keyboard more stenographer friendly.

Deming was a court reporter of the first order, and when the Sholes and Glidden came out in 1874, Deming seemed to think it had been built for the exclusive use of stenographers and stenographers only.
Between 1875 and 1879, Deming took out four US patents, all with suggested changes to the keyboard and all with the expressed aim of allowing stenographers to do their work more quickly and efficiently.
But he had one or two other bright ideas about typewriters, too, which we will get to.
First, a little about Philander. He was born in Carlisle, Schoharie County, New York, on February 6, 1829, the third son and one of nine children of Rufus Romeo Deming and his wife Julian Ann (nee Porter).
Philander learned shorthand as a child, graduated from the University of Vermont in 1861 and then from the Albany Law School.
He became a court reporter, demonstrating successfully a verbatim system of shorthand reporting. He was the The New York Times legislative reporter, and the official stenographer to the Albany District Supreme Court until he retired in 1882.
He wrote The Court Stenographer in 1879 and was a noted author, being proudly recruited by Willian Dean Howells in 1873 to write regularly for The Atlantic Monthly. Among his many stories, Lost is considered a minor classic for its time.

Philander's stories were about actual incidents of life, "as unadorned and uncoloured as the matter he recorded in court; with awareness of mountaineers' responses to the vicissitudes of life, he recounted narratives of people, self-possessed and reticent, yet ready to follow their convictions to the limit".
He died in Albany on February 9, 1915, having just celebrated his 86th birthday three days earlier.
One biographer described him as having "reflective, shy, mellow qualities". If only Sholes et al had thought so, too. 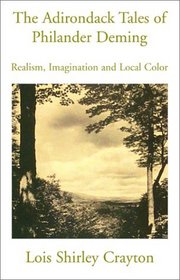 Posted by Robert Messenger at 20:48