On May 1, May Day – International Workers’ Day – it is entirely appropriate that we should salute Camillo Olivetti for his pronounced, lifelong socialist leanings. Camillo was not just, as Richard Polt points out, a genius among typewriter manufacturers, he was also very much a man of his word, ever true to his social and political beliefs. The social welfare programs he introduced at Olivetti factories, which were to be adopted and enhanced by his progressivist son Adriano, when Adriano took over the company in 1938, are truly praiseworthy. Olivetti was not just an industrial relations trendsetter – more to the point, an example setter - in Italy, but internationally. Its initiatives ranged from factory conditions, with a reduced working week and above-average wages, to 9 1/2 months paid maternity leave (almost unheard of at the time), family welfare and child care, worker’s housing and recreation facilities. Olivetti factories were unquestionably, in the company’s first half-century, the embodiments of a socialist ideal of Utopia. 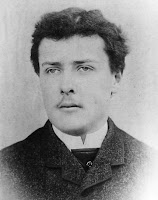 Camillo is described in Olivetti’s official history (Olivetti 1908-1958) as a man of “Jewish Old Testament piety and vision”, a man of “Messianic enthusiasm”. This was, apparently, “admirably complemented” and “prudently tempered” by his wife’s (Luisa’s) “rigorous Waldensian morality and her strict Gospel Christianity”. In later life, Carmillo converted to the Unitarian faith, one which teaches that reason, rational thought, science and philosophy co-exist with faith in God, and that humans have the ability to exercise free will in a responsible, constructive and ethical manner, with the assistance of religion. Whatever else Camillo’s Jewish upbringing might have taught him, a sense of fairness to all men was undoubtedly imbued deep within him. 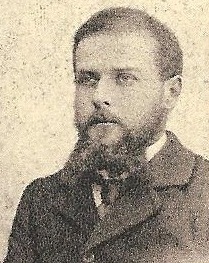 When one reads Consumers Union magazine reports of the industrial conditions in American typewriter factories in the late 1930s, as scanned in an earlier post on this blog, the extent to which Olivetti stood out in terms of industrial relations becomes even more apparent. While the reports praise the conditions at the Hermes factory in Switzerland, they condemn strike-breaking practises and employer intransigence at the Remington factory in the US, and find Underwood merely satisfactory. Comparing, in particular, Camillo Olivetti with James H.Rand, president of Remington Rand, a man described by an industrial trial examiner as “exhibiting a callous, imperturbable disregard of the rights of its employees that is medieval in its assumption of power over the lives of men and shocking in its concept of the modern industrial worker,” is like putting a god beside the devil himself.

Such was Camillo’s close relationship with his workforce, he even took part in Ivrea May Day marches with them. Olivetti’s history records that Camillo’s “interest in every detail of production and sales was complemented by his personal relations with each of his employees. He knew the work and he knew the men, who respected him for his experience and skill. Camillo’s intimacy with his workmen was unusual for Italy, but the men found it only natural for him to join their celebrations on May Day.” 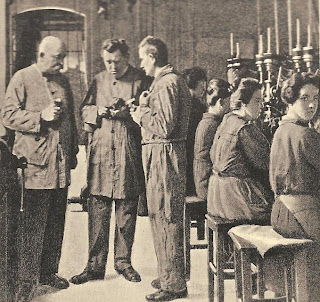 In his introduction to the Olivetti history, Adriano outlines his father’s socialist philosophy, as it applied to his relations with his workforce. But Adriano went to greater lengths to explain his own philosophy, one that embraced a concept of “community”, not just of the Olivetti company, but of other industries in Ivrea’s Canavese area. Read in the light of today’s fiercely competitive, cut-throat business world, Adriano’s vision of company cooperation and employee assistance across the region may seem wildly romantic and unrealistic. But clearly he was passionate about an idea which, he said, had taken 20 years to formulate in his head. “Long before it was theory,” says Adriano in the opening sentence of his “Notes Toward the History of a Factory”, “the Community was life.” 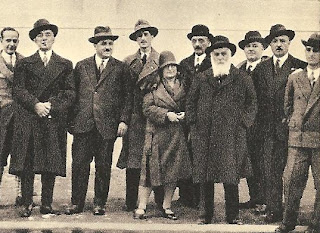 Romantic or not, a unique organisation called the Comunità did emerge under Adriano’s guidance and example, and spread not just across North Italy but throughout the country, acting as an effective counter to Communism. In the 1958 election for Italy’s Chamber of Deputies, the Communist Party vote dropped 3 per cent while the ISP vote rose 9 per cent and the fledgling Community Party won its one and only seat (Adriano Olivetti himself becoming the MP for Piedmont), having campaigned against particracy and Jacobin centralism, aiming to replace them with a federal union of local communities. The movement tried to merge both liberal and socialist ideas, opposing both conservatives and communists. It was all too short-lived, sadly, as Comunità died with Adriano in 1960. One claim has it, however, that “Statistics prove … that because of Olivetti’s organisation and its influence on the working class, Italy was spared from the tentacles of Communism.” 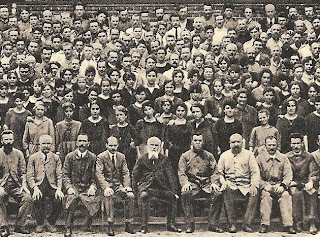 In his introduction to the Olivetti history, Adriano goes on the express his own personal disappointment at the failure of the Italian socialist revolution, which he says he witnessed during his years at a polytechnic institute between 1919-1924. “I can still picture the great parade of 200,000 people on May Day 1922, in Turin; but there was no one intellectually capable of channelling this great human impulse toward a better way of life. The question that remained in my mind was why the remarkable advances in business and technical organisation did not seem to have their political counterparts.”
The Partito Socialista Italiano (ISP) won 30 per cent of the vote in the 1919 Italian parliamentary elections. During the post-World War I crisis, the party called for revolution, but, according to S.I.Dorofeev’s entry in The Great Soviet Encyclopedia (1979) “its leaders failed to give purposeful, practical guidance to the mounting mass movement and were unable to devise specific means of attaining the victory of socialist revolution in Italy. In 1921 the revolutionary wing of the ISP withdrew from the party, forming the Communist Party of Italy. Under attack by fascism, which took power in Italy in 1922, the ISP had essentially ceased its activities in the country by 1926.” Mussolini had been editor of a Socialist newspaper but in 1915 broke with the pacifism of the socialists and was expelled from the party. The rise of fascism should have been - and in some cases was - exceedingly bad news for the Olivettis. 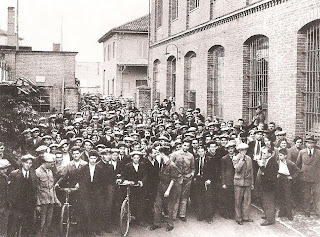 It must be to the eternal credit of the Olivettis, indeed, that in terms of continuing to support socialism, they went their own way in the face of a rapidly changing Italian political environment; they went on putting their beliefs into practise with their own workforce, and they maintained their socialist philosophy during a period when it was neither politically expedient nor personally safe to do so.
Olivetti Builds: Modern Architecture in Ivrea (2001), by Patrizia Bonifazio and Paolo Scrivano, says, “After an initial policy of not creating opposition to Fascism (perhaps also because of the Fascist party’s ambiguous position on social issues), Adriano Olivetti’s views hardened into evident dissent to the regime. Imprisoned in Rome in 1943 by the Badoglio government, in February 1944 Olivetti escaped to Switzerland, where he met many Italian intellectuals in exile. In May 1945, Adriano returned to Ivrea and a new phase of reorganisation and expansion in the company began.” 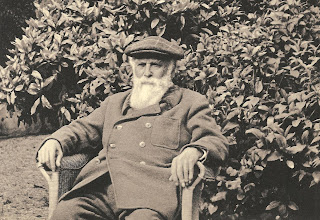 Camillo Olivetti had first set out his philosophy in a series of articles in Tempi Moderni and Azione Riformista “which preceded initiatives like the creation of the Burzio Fund in 1932 for health assistance, a complement of that guaranteed by Italian law at the time”.

The Olivetti history says, “When many factories were temporarily taken over by the workers, just after the First World War, the men at the Olivetti plant decided that their best interests were served by Camillo, and he remained in charge. What might be described as a kindly paternalism, seen from the viewpoint of today’s large impersonal industrial organisation, was then a personal relationship in which the workers’ esteem for Olivetti was based on his love for work performed as if it were an art. The economic results of the work interested him less, and indeed he was indifferent to money in itself … Certainly, his ideas of socialism did not stem from an economic view of society as from a moralistic vein. He was not a Marist, and did not think of society in terms of class conflict; he was a bourgeois and an industrialist, and as such it would not have occurred to him to condemn the capitalist system.” 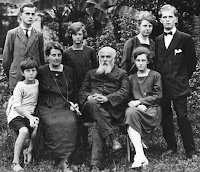 Later, the history adds, “Camillo Olivetti never had any doubts concerning the worker’s right to share in the profits, and it was on this basis that he understood co-operation between the classes, a conciliation whose ethical premises he found, with a somewhat bitter shrewdness, in the spirit of Christianity.”
The history describes Olivetti employer-worker relations as so close that plans often took on the character of group decisions. “Honest workmanship and honest dealing were a moral principle with Camillo, and he defended this principle without regard to profit.” 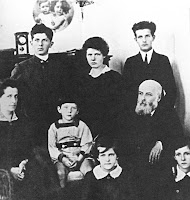 The Olivetti history ends its chapter on Camillo with a moving tribute: “The day [in December 1943] he was buried it was raining; but from Ivrea, from the neighbouring towns, and from every point of the Canavese region, the workers got to the funeral. They came by any means they could, most of them on bicycles, regardless of fatigue and danger. The Nazis were slaughtering Partisans and threatening whole towns with reprisals. The little Jewish cemetery in Biella [where Camillo died] could have become the scene of a massacre. Yet it was filled that day with silent bare-headed men standing in the rain.”

What more need be said about a man who turned his ideals of socialism, of fairness and equality, into a working, practical reality, a man who turned a typewriter factory into a worker’s Utopia?
TOMORROW: Adriano the Aesthete: Typewriters As Things of Beauty
Posted by Robert Messenger at 12:24

P.S. you should post your radio interview to the typosphere.net page. (:

I didn't really feel the need for an Olivetti, until I read your history. A socialist typewriter with a conscience? Now its a must-have. And they do have a kind of logo thing and their print graphics are legendary. Lettera 22 or 23?

Businesses with a conscience - now there's a thing. Reminds me of Titus Salt, and the sweet toothed Rowntrees (now Nestle) and Cadburys (now Kraft).

Hi Rob. My vote would be for the Lettera 22, a lovely machine with that added bit of history.