On This Day in Typewriter History (I)

MAY 21
On this day in 1932, 79 years ago today, August Dvorak and his brother-in-law, William L.Dealey, applied for a patent for the "simplified" keyboard configuration they wanted to replace QWERTY (some hope!). They said their invention related to "the spacial arrangement of the keys in a typewriter keyboard". "It has for its general objects (1) the provision of a scientific plan of arranging the keys which will decrease the possibility of typing errors, (2) facilitating increase of operating speed by eliminating awkward sequences, (3) assisting increase of speed because of fewer errors, (4) lessening the fatigue of the typist, because of fewer interruptions due to errors, because of better arrangement of the keys for typing the sequences most frequently used, and the rhythmical flow of typing induced thereby, and because of more evenly distributed labor for the individual fingers and the two hands."
The patent (see below) was granted on May 12, 1936.
Dvorak is seen in the photo below giving a typing class at the University of Washington, Seattle, on November 14, 1932, six months after his patent application. 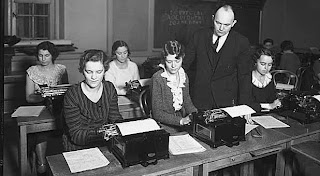 Dvorak (born in Glencoe, Maryland, on May 5, 1894; died October 10, 1975]) was an educational psychologist and professor of education at the University of Washington. Dvorak was distantly related to the Czech composer Antonín Dvořák. 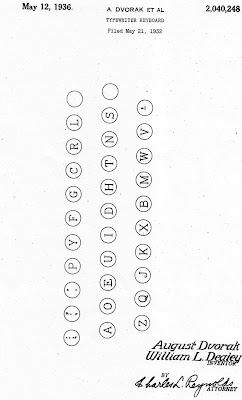 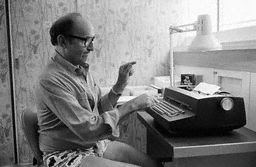 American writer Harold Robbins (above), “The Man Who Invented Sex”, was born in New York City on this day in 1916. He died in Palm Springs, California, on October 14, 1997.
This photograph was taken by James Andanson on July 3, 1978, at Robbins’ home in the south of France, at St Tropez.
Robbins is one of the best-selling authors of all time. He wrote 25 best-sellers, selling more than 750 million copies in 32 languages.
He was born Harold Rubin, the son of well-educated Russian and Polish immigrants, and raised in Brooklyn.
His books include Never Love a Stranger (1948), The Dream Merchants (1949), A Stone for Danny Fisher (1952), The Carpetbaggers (1961).