On This Day in Typewriter History (XI)

MAY 31
Former world heavyweight boxing champion and consummate typewriter promoter, William Harrison “Jack” Dempsey (“The Manassa Mauler”), died in New York City on this day in 1983. He was born in Manassa, Colorado, on June 24, 1895. This Oliver 9, in the Dempsey Museum in Manassa, is claimed to have belonged to the boxer: 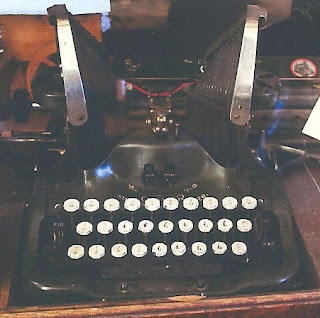 But if Dempsey did use an Oliver in his hometown, he had even bigger typewriters to grapple with, elsewhere later in life: 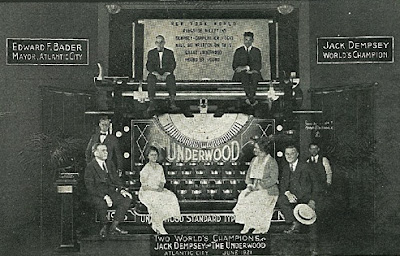 In his time, Dempsey helped publicise Underwood, Corona and Royal typewriters (if not Oliver) – Remington must have been feeling very much left out of Dempsey’s willingness to spread his typewriter-endorsing largesse around. 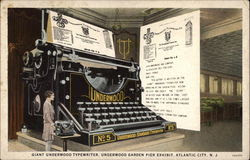 Less than two years after relieving Jess Willard of the heavyweight title in Toledo, Dempsey was stepping up for Underwood – literally. In a publicity shot with Atlatic City mayor Edward L.Bader, Dempsey jumped on to the carriage of the giant 14-ton Underwood 5 at the Atlantic City Garden Pier (above). A postcard of the event is titled “Two world champions”.

The big typewriter was built for the Panama-Pacific Exposition in San Francisco in 1915 (above). 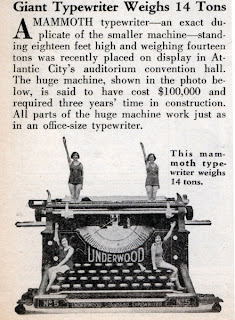 It took three years to build, was 18ft high and 21ft wide, and was a fully functioning replica of the Underwood (just 1728 times bigger). Each typebar weighed 45lb and the carriage weighed 3500lb. The paper was 9ft wide by 12 1/2ft tall and the typing was done by remote control. The typewriter printed out attendance figures of the fair. 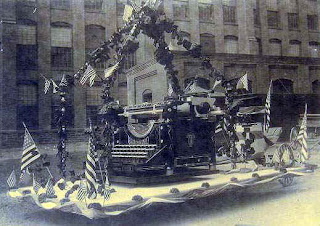 After the fair, the typewriter was moved to Atlantic City in 1916. There, it became part of Underwood's “Products and Progress Pavilion”. Later, it was moved to a Convention Hall store facing the Boardwalk. 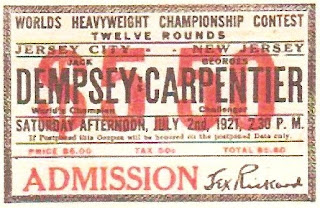 Dempsey was in Atlantic City at the time (June 1921) the postcard photograph was taken while, preparing to defend his championship against Frenchman Georges Carpentier, in Jersey City on July 2, 1921 (ticket above). It was boxing's first million dollar gate, and Dempsey won in the fourth. 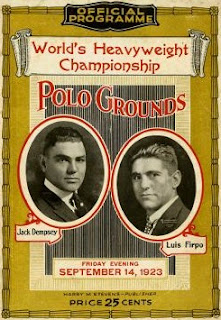 Dempsey next stepped into the typewriter promoting ring for - on September 14, 1923, when he fought the Argentinian Louis Angel Firpo ("El Toro de las Pampas - The Wild Bull of the Pampas”) at the Polo Grounds in . 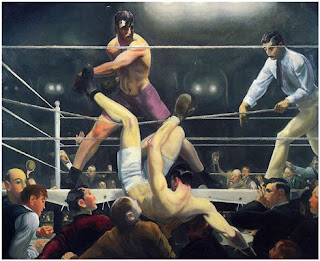 Jack Lawrence of The New York Herald Tribune was using a Corona 3 at ringside to cover the bout. During a Firpo onslaught at the end of the first round, the Argentinean caught the champion’s chin with a right and Dempsey went out of the ring through the ropes – landing on his neck and shoulder on top of Lawrence’s Corona and cutting the back of his head. Lawrence helped get Dempsey back on to the canvas at the count of nine. Dempsey was able to recover, continue and retained his title in the next round, knocking Firpo down three times before the fight was stopped at the 57-second mark. Lawrence went on using his Corona to describe the action. When the Corona Typewriter Company heard about the incident, it launched an advertising campaign stating, “Dempsey knocked out Firpo, but he couldn’t knock out the Corona 3.” (The Firpo knockdown, by the way, is the subject of a famous George Wesley Bellows painting, above). 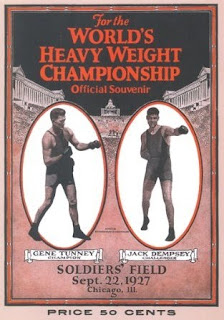 It has subsequently been claimed that pioneering female sports writer Jane Dixon, of the New York Telegram, had a part in all this. One account had Dempsey “hurtling toward [Dixon’s] ringside seat … Fortunately for her, she and her typewriter were spared injury when Lawrence caught the champ and, with the help of a Western Union operator, pushed him back into the ring.” 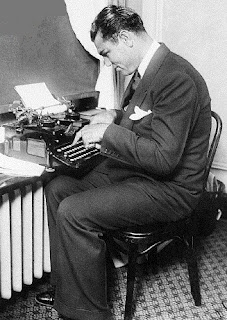 Dempsey entered the typewriter promotion business again on September 22, 1927, when the Royal Typewriter Company – desperate to break into a portable typewriter market then being completely dominated Corona, Underwood and Remington – sponsored the first nationwide radio broadcast of a world title fight. 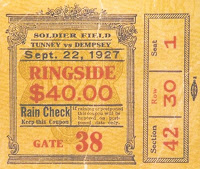 This was Dempsey’s famous bout with Gene Tunney at Soldier’s Field in Chicago, with a $2.7 million gate and a record live attendance of 104,000. The audience for the Royal-sponsored radio broadcast would have been colossal. 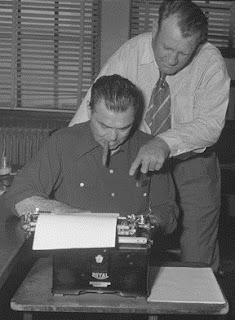 In June 12, 1949, the benevolent Dempsey found himself in Fargo, North Dakota, helping the footballer-turned-wrestler Bronko Nagurski promote a wrestling match (for which Dempsey was referee). They were photographed together at the Fargo Forum and Daily Tribune’s sports department. According to the newspaper, “Nagurski … told the former world heavyweight boxing champion that he must have punched faster in his ring days than he does on a typewriter.” On this day in 1929 (though there are various other claims, between May 23 by the IMDb and July 31 by other sources), the first talking cartoon of Mickey Mouse, The Karnival Kid, was released. Few characters in history have had as many typewriters named in their honour as Mickey Mouse.

Although The Karnival Kid was Mickey's ninth short, it was the first in which he actually spoke (saying, “Hot dogs, Hot dogs!”). Walt Disney himself voiced Mickey. 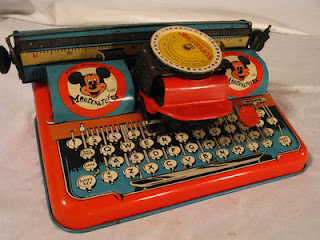 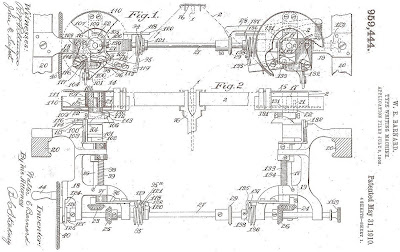 Posted by Robert Messenger at 15:56

I've often seen the giant Underwood in postcards, photos, etc., but no one seems to know what became of it. Does it languish in some forgotten warehouse? Or was it donated to the WWII scrap drive?