How Typewriter VANDALS have changed the dynamics of collecting 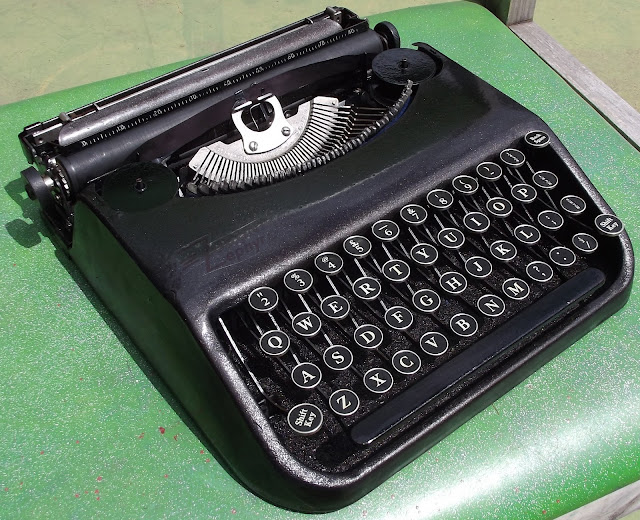 1938 Corona Zephyr: Saved from a fate worse than death
IN HORSERACING PARLANCE,
IT'S A CASE OF BUY IT NOW
OR IT'S OFF TO THE KNACKERS
Van·dal: noun. 1. One who wilfully or maliciously defaces or destroys public or private property.
Knack·er: noun.  2. A person who buys discarded structures and dismantles them to sell the materials.
I had an interesting experience yesterday. While my supply of typewriters from recycling centres has pretty much dried up, thanks to the gross mishandling of this service by the Australian Capital Territory Government, I still occasionally make the effort to look in on op-shops, bric-a-brac shops and antique shops and the like.
There is one in particular that I hadn't visited for a while, but it usually has some typewriters at reasonable prices, so I called in yesterday "on spec".
First, I was told the owner had "something to show me".
Eventually, when I spoke to the owner, she wanted to tell me, "People are now cutting the keys off typewriters and selling them as jewelry, you know." 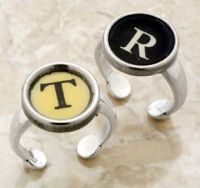 Recycled craft? It's called destroying history
In a post before Christmas, I had warned that the typewriter VANDALS would be out and about at that time of year, and that it seemed one in particular had, to my absolute horror, penetrated my outer defences and invaded the Australian Capital Territory. She was selling typewriter jewelry at a Canberra craft market.
The antique shop owner wanted me to know this person was chasing her (and no doubt others) for old typewriters to VANDALISE. (Yes, indeed, she had even contacted me about a year ago.)
The bric-a-brac store owner said she had typewriters that were "all rusted up .. beyond repair" and she was considering selling these to the VANDAL. 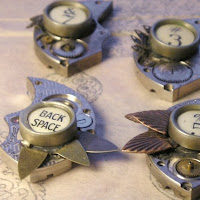 Destroying typewriters? Why not slice up some old watches while you're at it?
I pointed out that typewriters were made to last and usually did, when looked after, and that it was very rare that a typewriter was totally "beyond repair".
A classic example, surely, was a Royal Bar-Lock which I had bought from this very same store owner. She had found it in bits, most of them heavily rusted, and I had restored it so that it not only worked (to a point) but looked magnificent. At least people in Australia can now see what a Royal Bar-Lock really looked like. Otherwise, the parts would have been landfill.
The shop owner nodded her head as I made my points, but replied that the reality of the situation was that the VANDAL could buy an old typewriter for $30 and sell up to 40 odd keys for up to $30 each, as cufflinks, pendants, rings, bracelets etc. There was good money to be made from this VANDALISM. 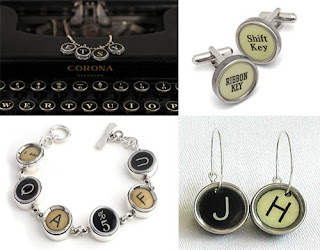 Feeling proud about destroying an old Corona? Shame is the five-letter word you need.
I would like to think of myself as something of a crusader against this commercially-motivated destruction of history, but I'm afraid I can't afford to save all the typewriters that are headed for an undeserved doom.
My first thought was that old typewriters are part of our heritage. If someone in Canberra wanted to knock down an old building, or cut down an old tree, there would be outrage. They would be stopped. There is a gnashing of teeth if an old building is burned down, or a steam train is destroyed, or even an old fire engine or car.
How are old typewriters with silver keyrings any different?
My second thought was that the VANDALS are changing the dynamics of buying old typewriters - of collecting them, restoring them, preserving them, displaying them for the benefit of yourself and others. Of having a keen interest in mechanical history - in history itself. Of doing something positive, not destructive. Of having something interesting to show future generations: How much interest will our grandchildren have in a piece of cheap jewelry 50 years hence? 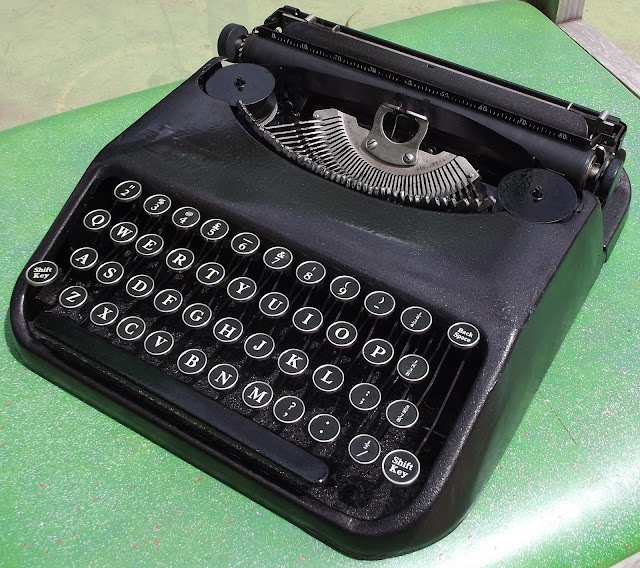 Now I get to my point here: during this conversation, the shop owner had shown me a Corona Zephyr and an Underwood 3, both in pretty ordinary condition but both still working.
In the case of the Zephyr, a previous owner had crudely tried to "tart" it up by hand painting over the decal (a very poor job he made of it, too) and slapping black paint along the keyboard surrounds and at the back. I could see instantly that this poor paintwork could be stripped back and a proper respray done. I envisaged that, having done so, the Zephyr would look splendid - and work well too! 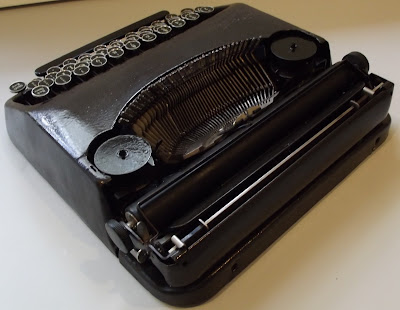 The penny suddenly dropped - where I was being led was this: Buy these typewriters at this price OR THEY GO TO THE VANDAL.
So, simply to save the Zephyr from a fate worse than death, I bought it for $30. I've yet to see a price on the Underwood 3.
In less than 24 hours since I bought the Zephyr, I have managed to take it apart, get the workings out of the casing, clean it up and respray the outer parts. My photography (and camera) truly doesn't do the end result justice - it does look splendid. It needs a bit more work, to tighten up the paper feed so the paper doesn't wobble about on the platen so much ... but ...
IT HAS BEEN SAVED FROM THE KNACKERY! 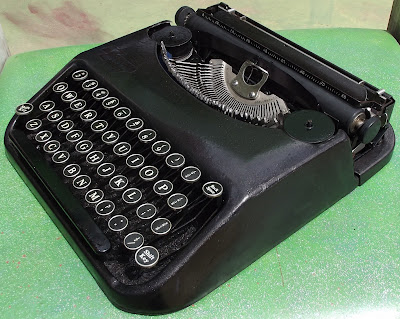 I feel confident someone will love this machine as a gift, and get more use out of it than they would a pair of cufflinks ... 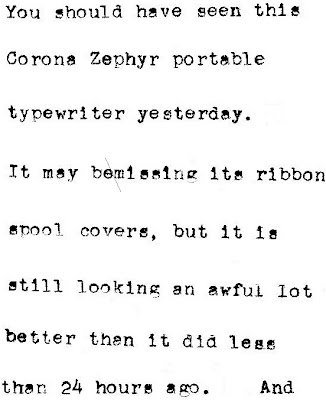 Reminds me of this classic National Lampoon cover.

I can't lie - I design jewelry, and I've been known to scour junk shops looking for an old typewriter because I love the look in jewelry. I haven't found any I can afford (for the same reason you stated - there's money to be made-d in old parts).

So yeah, I make jewelry, but I'm also a lover of history with a lot of respect for our neglected old relics. If it came right down to it, I honestly don't think I could really ever bring myself to destroy a distinguished old machine for parts.

I've since found a source for reproduction typewriter-key beads, so I can get the look without having to stoop to vandalism. I wish more jewelry designers would go that route.

I haven't found faux keys in anything other than laser cut wood.

Someone has got to start making and selling faux typewriter keys, so the Steam Punk modders, will use those instead.

Where abouts do you get the reproduction keys from?
Are you able to email me?
Thanks
Steve :-)

Just stumbled accross this blog. In agreeance with all comments! I design jewellery and looking at vintage typewriter with the thought of removing keys! Shock horror how can I destroy this piece of history... not possible. Therefore the next step is to look at alternatives. Can anyone please provide me with a supplier for reprodution typewriter keys. I am desperately seeking quality though. Any help appreciated

For anyone looking to make jewelry without destroying a piece of history, both Tim Holtz' Ideaology line and Oriental Trading Company now offer replicas of vintage typewriter keys. The Tim Holtz stuff may be a little pricey if you're making a lot to sell at craft fairs, but you may want to check both sources.

For anyone looking to make jewelry without destroying a piece of history, you can find replica keys both in the Tim Holtz Ideaology line and from Oriental Trading Company. You can also find various typewriter key fonts, which you can use to produce pieces in shrink plastic or poly clay. If using clay, you can mold silver or copper colored key-shaped pieces, do image transfer of the key tops onto separate pieces, and do an inlay. Just make sure the image you're using for transfer is printed in reverse before you put it onto the clay. Another alternative is typewriter key stickers, topped with glass half-marbles, clear epoxy resin, or dimensional adhesive like Diamond Glaze, and then set into metal bezels.

Another option for your 'glass topped' faux keys would be ultra thick embossing enamel, which would require a special melting pot. Those items are marketed by Ranger.