On Australia Day, Our One and Only 'Typewriter' 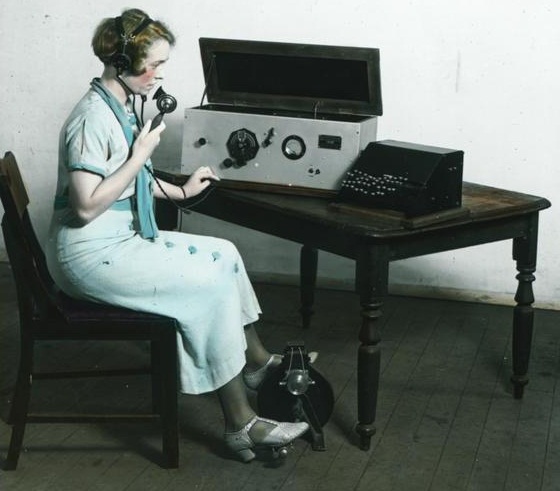 Normal transmission has been briefly interrupted while work continues on our collaborative fiction project: Part III of Bijou On The Nile, by Ryan Adney, shall appear tomorrow. Could the author of Part IV please step forward and volunteer to keep this going ... please? 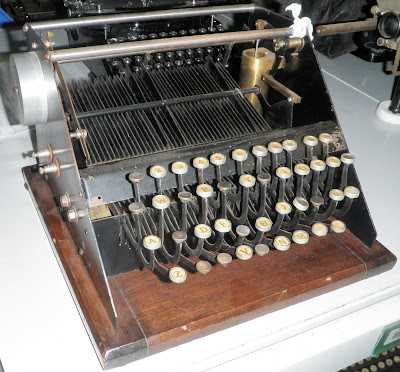 Traeger Typewriter, Scienceworks, Museum Victoria, Melbourne
Meanwhile, in its place, and in the best traditions of telecommunications, we instead bring you something completely different - a repeat.
Well, a repeat of sorts: It has not previously appeared on this blog, but this article about Australia's only home-made "typewriter" was published in ETCetera in September last year (in making this claim we excluded, of course, Remington's "Australian-Built" typewriters, which were merely assembled here in the 1930s). 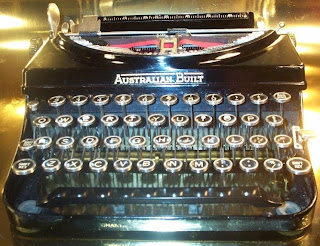 The excuse for running this article here now is twofold: One, today is AUSTRALIA DAY! So we are feeling that annual need to express a justifiable pride in ourselves. (Though how any nation which continues to have a Union Jack stuck in the top left corner of its national flag can feel proud of itself I simply do not know!) 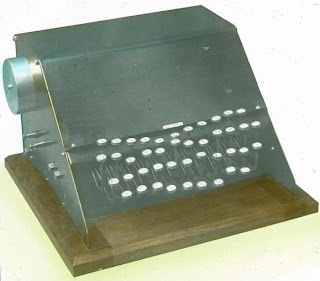 Two, I have just come across new images of the "typewriter" in question being used, which I did not have in time, sadly, to offer to editor Richard Polt to run with the ETCetera story. So here it is: 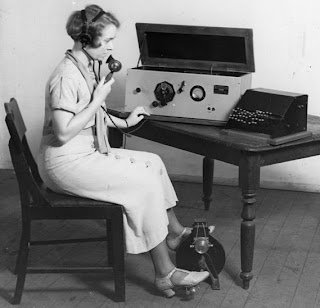 THE TRAEGER TYPEWRITER
Australia has produced at least one typewriter inventor - of sorts. Alfred Herman Traeger is best known for his development of a pedal-powered radio, which from the late 1920s provided a means of direct contact to the outside world for Aboriginal communities and white Australian settlers living in the nation’s vast “outback”.
But Traeger’s wireless sets required a working knowledge of the Morse code, which few of the people in need of his radios had. In 1933, Traeger overcame this problem by devising a Morse typewriter. 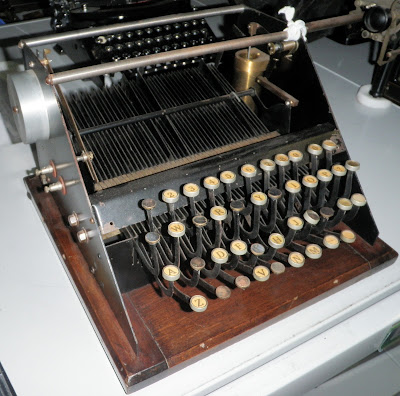 When he developed his wireless, Traeger was aware of earlier, World War I-era pedal-powered electricity generators. As a young man, he had seen a travelling Pathé picture show, the screening of which was made possible by a bicycle-mounted power unit. While it generated only a low voltage, it gave Traeger the idea he would, in 1929, turn into the vital element in the success of the Royal Australian Flying Doctor Service.
As one biographer would have it, Traeger made “generator armature winding an art form”. His two-way network became “the heartbeat of outback life”. 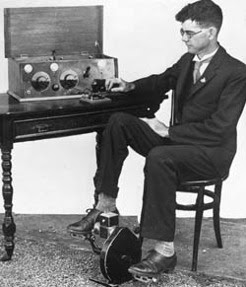 Traeger demonstrates his pedal-powered wireless
Whether Traeger also had any knowledge of Charles Elmer Yetman’s Morse-transmitting typewriters may never be known. Yetman, of Oak Park, Illinois (also Hemingway's home town), had first applied for a patent for an automatic telegraphing-machine in September 1893, and followed this with a design for a “combined type-writer and telegraphic transmitter” in September 1895. He incorporated improvements to these in a patent application filed in February 1901. The first two patents were assigned to the World Flash Company of Chicago. 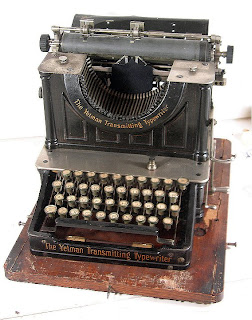 Richard Polt Collection
While the idea behind the Yetman and Traeger machines is broadly the same, they look very different. The Traeger Morse typewriter is rudimentary to say the least, yet it was highly functional. Strictly speaking, the Traeger “typewriter” is no more than an automatic Morse keyboard. While it resembles a typewriter, it simply comprises of keys connected to a working face of pivoted steel bars, with notched long and short spacings corresponding to the Morse alphabet. An oil-filled dash pot was necessary to produce smooth movement of the keyed arms. 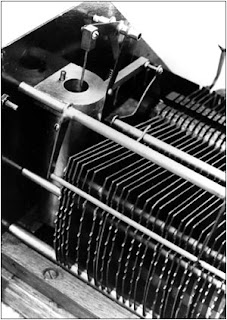 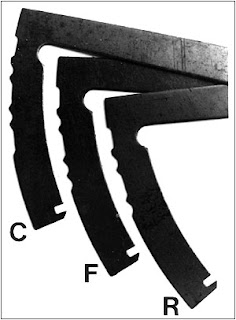 Images courtesy of Traeger biographer Richard Begbie
Yet the Traeger machine helped provide what the Flying Doctor Service founder, the Reverend John Flynn (below), had described as a “mantle of safety” for Australians living in extreme isolation.

An image of “Flynn of the Inland” is featured on the Australian $20 note, and Flynn is revered within the Uniting Church as one of its equivalents of a saint. Traeger, on the other hand, is almost forgotten. Though he continued inventing almost to the time he died, in 1980, and though his pedal-powered radio was later used to aid people in parts of Africa and North America, Traeger’s achievements have disappeared from Australian consciousness. 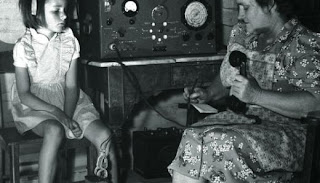 Alfred Traeger was born on August 2, 1895, at Glenlee, near Dimboola, 225 miles north-west of Melbourne in Victoria, Australia. His father, Johann Traeger, was a farmer, born in South Australia, where Johann’s German parents had migrated in 1848. Johann took his family back to South Australia in 1902, when Alfred was seven. The Traegers settled near Balaklava, 58 miles north of Adelaide. Alfred attended the Balaklava Public School. 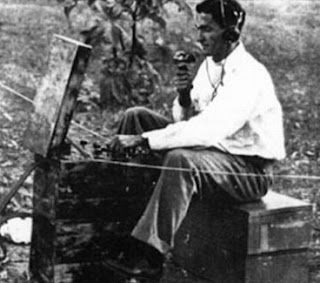 Alfred was described as a “curious, patient, precise child”. At the age of 12 he made a crude but effective telephone receiver, and was able to transmit between the toolshed and the family home, 55 yards distant. Traeger used whatever he could lay his hands on: bits and pieces of equipment from around the farmyard were patched together to make a microphone and earpiece; the diaphragm for the earpiece was made from a tobacco tin lid, the magnet was the prong of a pitchfork and the carbon for the microphone came from the kitchen stove. Farm fencing wire was also called into service. 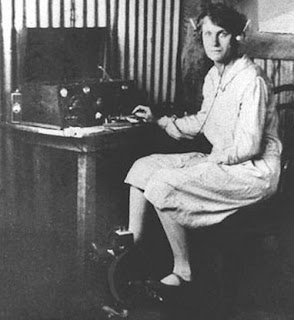 Traeger was sent to the Martin Luther School in Adelaide before spending two years at a technical high school. From 1912 he studied mechanical and electrical engineering at the South Australian School of Mines and Industries, gaining an associate diploma in 1915. Traeger’s special interests were in ammeters and generators. He went to work for first the Metropolitan Tramways Trust and later the South Australian Postmaster-General's Department.
By the outbreak of World War I, Traeger had also developed a passion for aircraft, and during the war he tried to enlist with the Australian Flying Corps. However, he was turned down because of his German ancestry, even though his grandparents had long since become naturalised Australians. 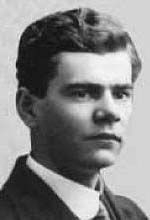 Traeger’s bent for inventing led to him applying to the US Patent Office in March 1920 for a combined variable-speed clutch and free-wheel device for motorcycles. In 1923 Traeger joined Hannan Brothers in Adelaide, handling their car generator and electrical repairs.
He had already become intrigued by radio. While at the school of mines and industries, Traeger had studied the work of Guglielmo Marconi and Heinrich Hertz on the nature of radio waves. Traeger obtained an amateur radio operator's licence, with the call sign VK5AV, and became a member of the Wireless Institute of Australia, the oldest amateur radio society in the world (established 1910).
For his final practical examination at the school of mines and industries, Traeger had to build a high-voltage generator. It was through this device that, in 1925, Traeger was introduced to John Flynn. On a salary of £500 a year, Traeger joined Flynn’s mission. 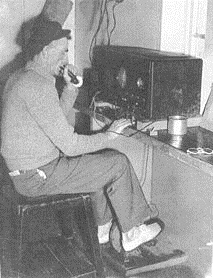 Flynn had founded the Australian Inland Mission of the Presbyterian Church of Australia in 1912, and in 1928 the AIM established an Aerial Medical Service. At the time of meeting Traeger, Flynn had declared “the practicability of the Flying Doctor proposal depends almost entirely on the widespread adoption of wireless by bush residents”. In 1926 Flynn and Traeger carried out wireless experiments in outback areas, and succeeded in transmitting the first radio telegram. But the awkwardly-sized and weighted, heavy-duty copper oxide Edison batteries proved unsuitable for remote homesteads.
Traeger overcame this problem by inventing a small, low-cost (£33 each), durable, easy-to-operate pedal-driven generator which was “comfortably” capable of producing 20 watts of direct current power at a pressure of 300 volts, sufficient to run a high frequency transceiver. He enclosed the generator's fly-wheel and gears in a cylindrical metal housing, with pedals outside and a cast base to be screwed on to the floor beneath a table. Traeger built the transceiver into a box, employing a master switch to separate the crystal controller transmitter from the receiver. 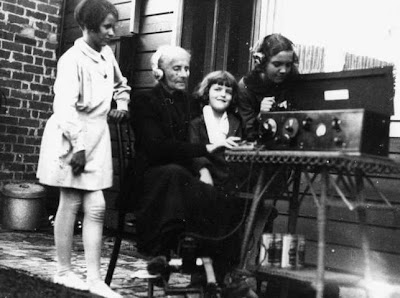 From 1929, Traeger travelled to outback areas across Queensland, South Australia, the Northern Territory and Western Australia, installing these sets and teaching the users Morse code and how to use their radios.
He found, however, that for many people, grasping a working knowledge of the Morse code presented a fresh challenge. So in 1933, Traeger invented his typewriter Morse keyboard, enabling outback users to type their message in plain language and have it transmitted in Morse. He later developed a voice-capable transceiver. 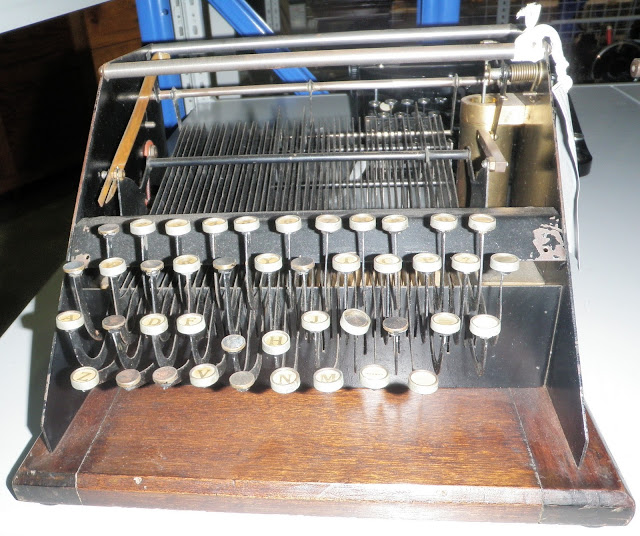 Traeger was honoured for his work with the Flying Doctor Service (as it had become known in 1942) by being appointed an OBE (member of the Order of the British Empire) in 1944. Traeger had suggested the idea of a School of the Air, and in 1951 this became a reality through the work of Adelaide Laetitia Miethke, a South Australian teacher.
Traeger continued inventing: In 1974 he patented a gas turbine-driven car and used solar power to convert salt water to fresh water. He died on July 31, 1980, at Rosslyn Park, Adelaide.

Thanks for the great write up! My daughter and I are taking a HAM class and getting ready for our Technician exam. So this mixes two things we are fascinated with.