I Love You Forever: The 'Empire Junior', an Aluminium 'Portable' Typewriter 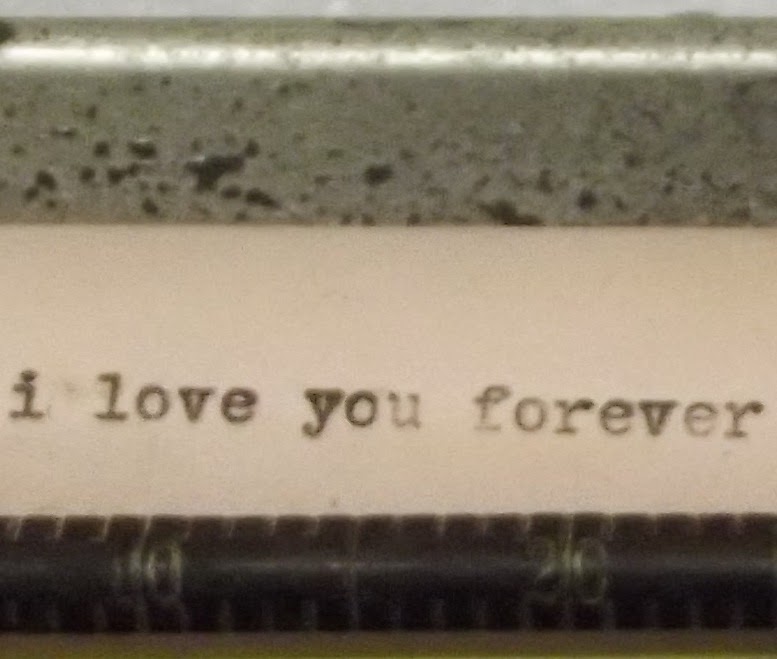 The curators at the Powerhouse Museum in Sydney have no idea who wrote this, to whom or when. But in line with the museum's policies, they have kept things the way they were and are - this was in the platen when the Empire Lightweight Model was donated to the Powerhouse by a man called H.J.Bons (date unknown, but probably in the late 1930s). 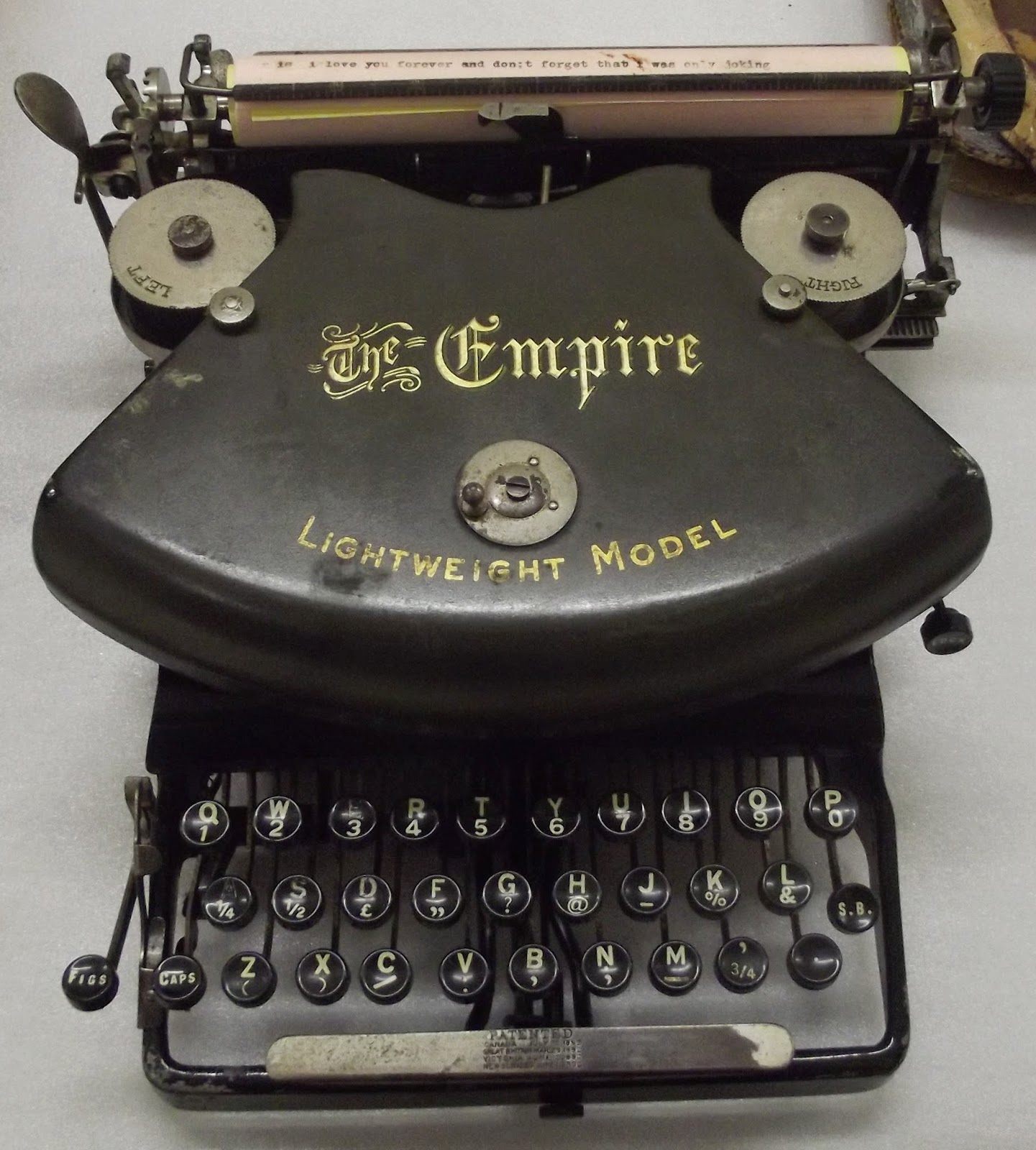 A few weeks ago, after my visit to the storage vaults of the Powerhouse Museum in Sydney, I posted a photo of this Willesden canvas (and duct tape) covered typewriter case, asking if anyone could guess what was inside it. Nobody tried, even with the clues I offered. 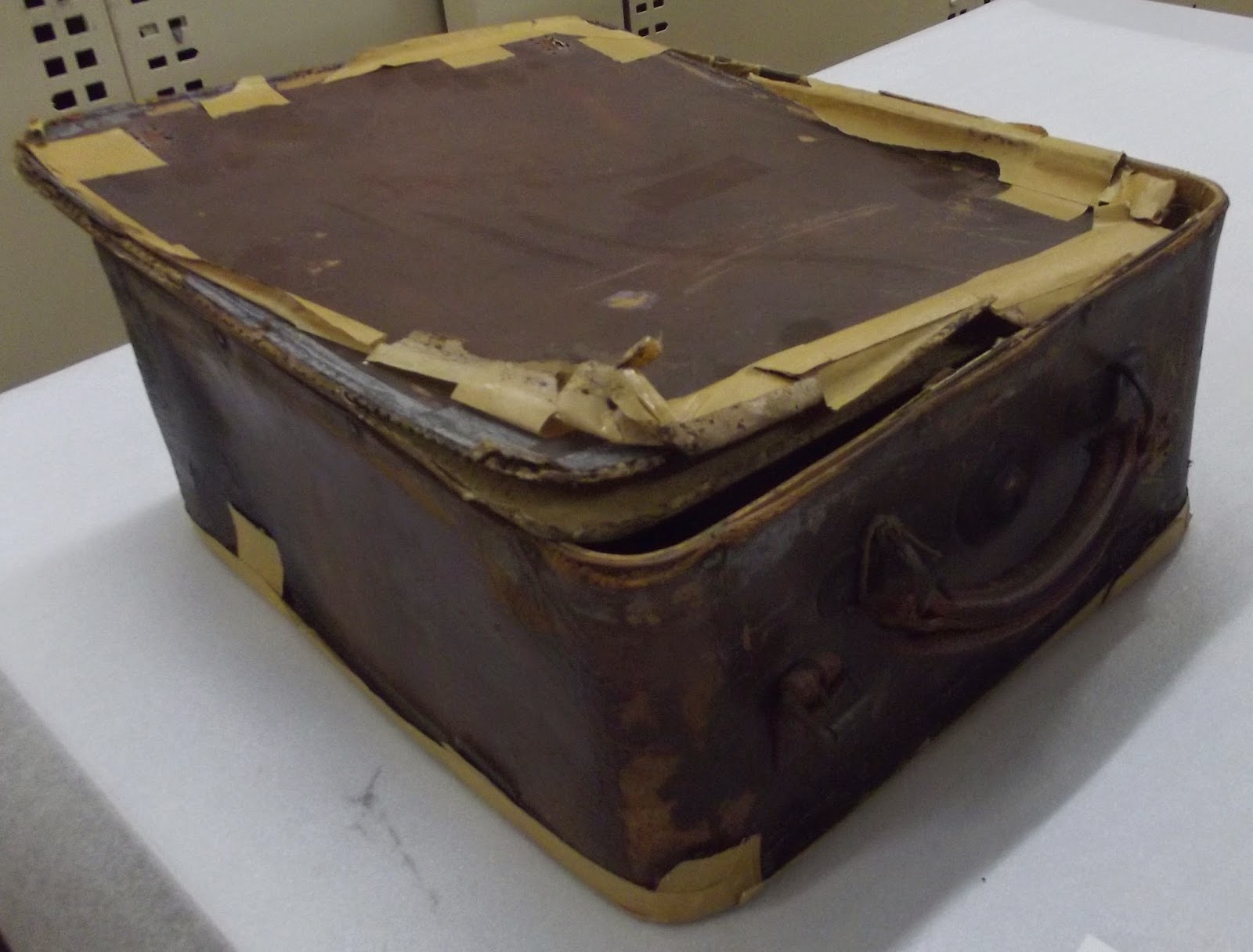 I had no idea myself what would be in it, until Powerhouse typewriter curator Matthew Connell opened it and revealed a Canadian-made, khaki green, predominantly aluminium Empire Lightweight Model. I hadn't previously realised such a typewriter existed (a Lightweight Empire, that is - but the colour, similar to that used on Olivers and early [aluminium] Imperials, surprised me as well). Two other known models of the Lightweight Empire apparently appear in dark grey and black (see Paul Robert's description below).
Of course, the case wasn't always so battered. When the Lightweight Empire was launched on the international market in early 1916, this is what a new case looked like: 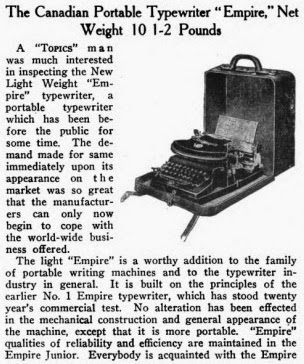 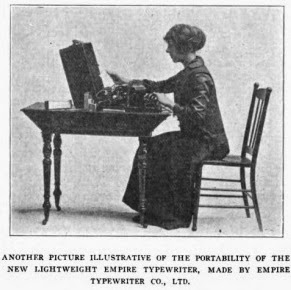 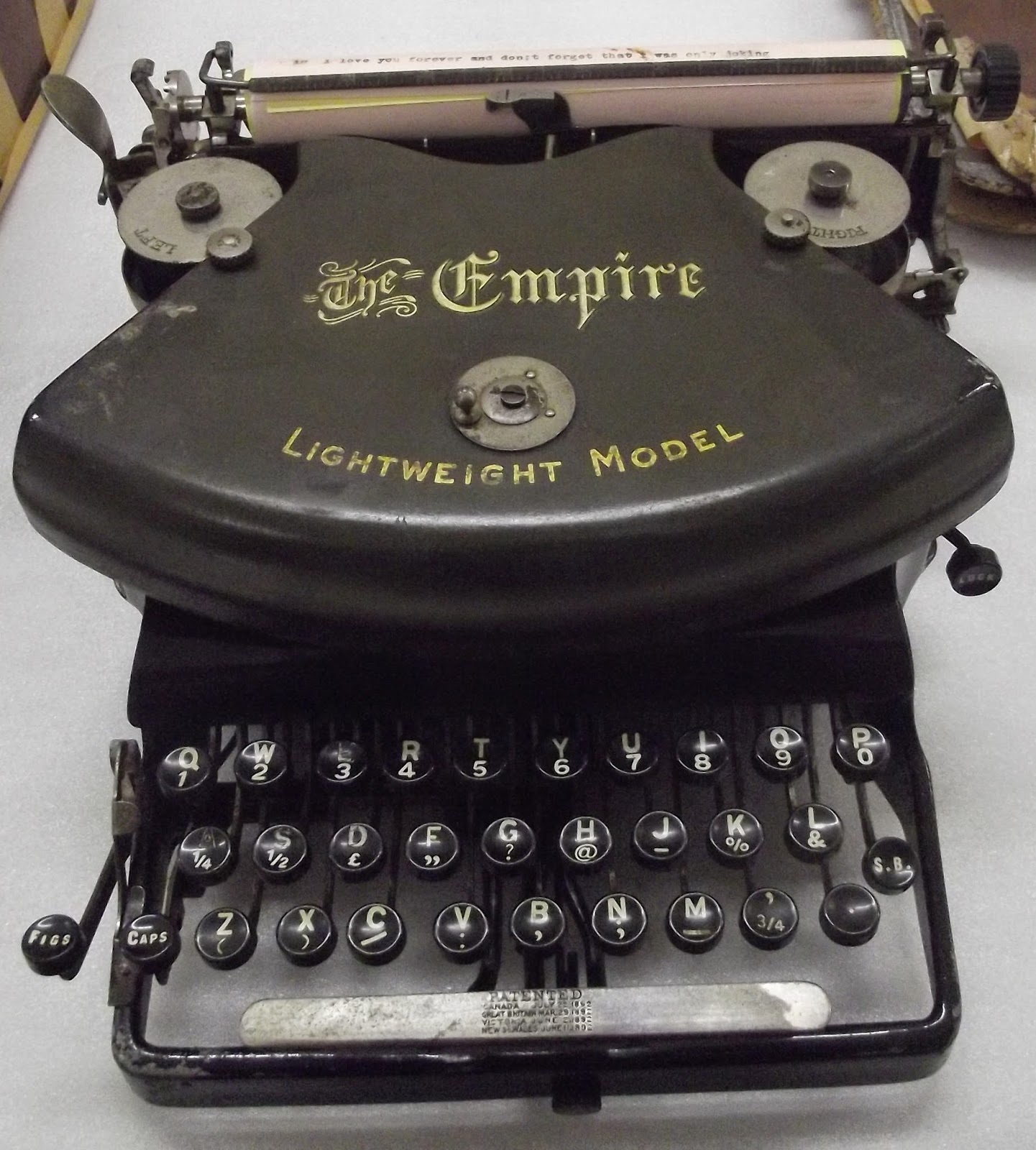 I'd taken lots of things with me to the Powerhouse, including a measuring tape, but didn't think to take scales. I did lift the Lightweight Empire, however, and the significant difference in weight with a conventional Empire (the Powerhouse also has one of these) was easily discernible. It turns out there is more than 5lb (2.4kg) difference! 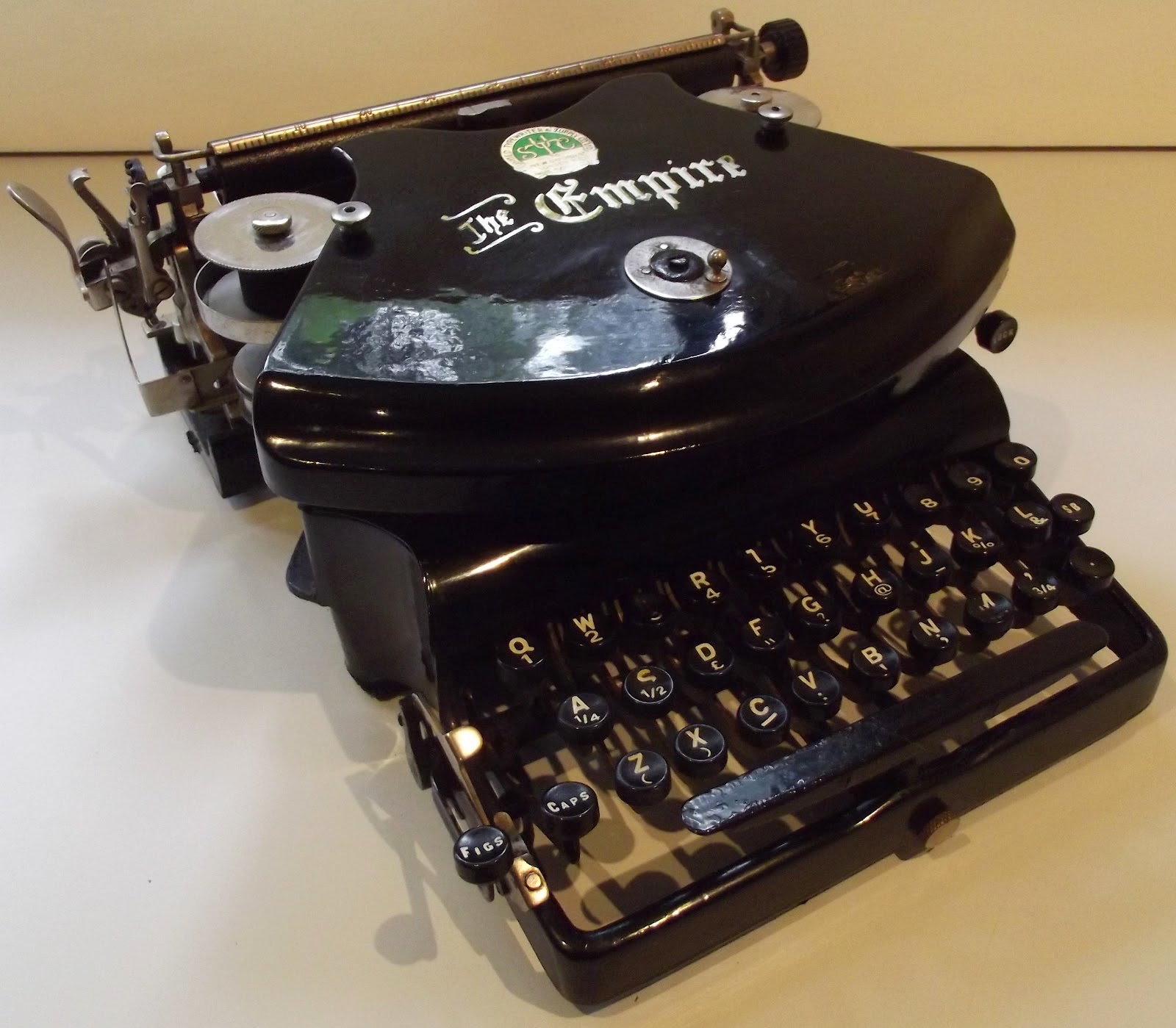 My Empire
Happily, when I got home and did a bit of research, I found Dutch* typewriter collector and historian Paul Robert had acquired a Lightweight Empire some years ago and had weighed the two models. Paul wrote on the Yahoo typewriter forum:
"1. The Lightweight has a dark grey cover and a decal that says Lightweight Model. It also has a decal for the London distributor and it says Made in Canada. The rest of the machine is black. The regular one is completely black.
"2. The entire frame AND all typebars of the lightweight model are made of aluminium. There are some minor differences in the shape of the frame. Also, the frame rail around the keyboard is a bit higher, probably for strength of the structure. [The Lightweight is 13 inches by 14 1/2 inches and 6 1/2 inches high. My Empire is 12 1/2 inches by 14 inches by 5 inches high.]
"3. The Lightweight weighs 4.5 kilos [9.9lb]. The regular Empire weighs 6.9 kilos [15.2lb]. [In its case the Lightweight weighed 10 1/2 pounds.] The aluminium machine is clearly the later machine, which makes sense, because aluminium casting would not have been available in 1894. The lightweight would probably have been built in the early 1900s."
The late Tilman Elster added to Paul's observations: "Only the thrust bars and some small components [such] as the carriage rails are of steel." 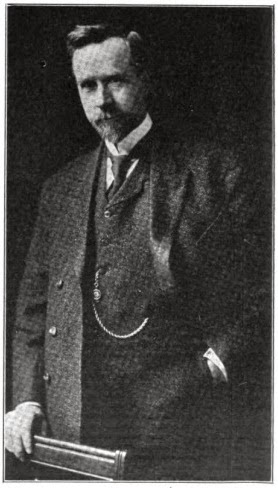 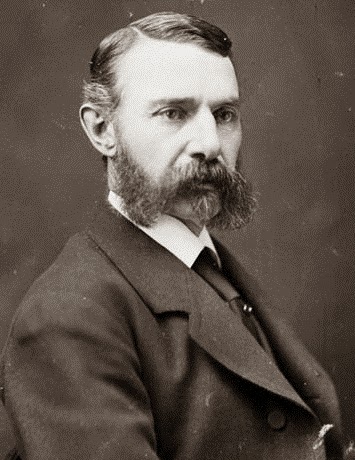 Charles Carroll Colby
Like the conventional Empire, the Lightweight Empire was made in Montreal, Canada, by what was formerly Charles Carroll Colby's Imperial Writing Machine Company. After Colby's death in 1907, and under Colby's son Charles William Colby (1867-1955), it had become the Empire Typewriter Works. The Colbys senior and junior were business partners of Kidder's. For the story on how Empire inventor Wellington Parker Kidder and Colby senior got together, see my post here.
Another thing of interest for me on this Lightweight Empire were the 1892 patent dates stamped on the spacebar. They are for Canada, Britain and Victoria and New South Wales - the two Australian colonies demanding individual patents before Federation in 1901. 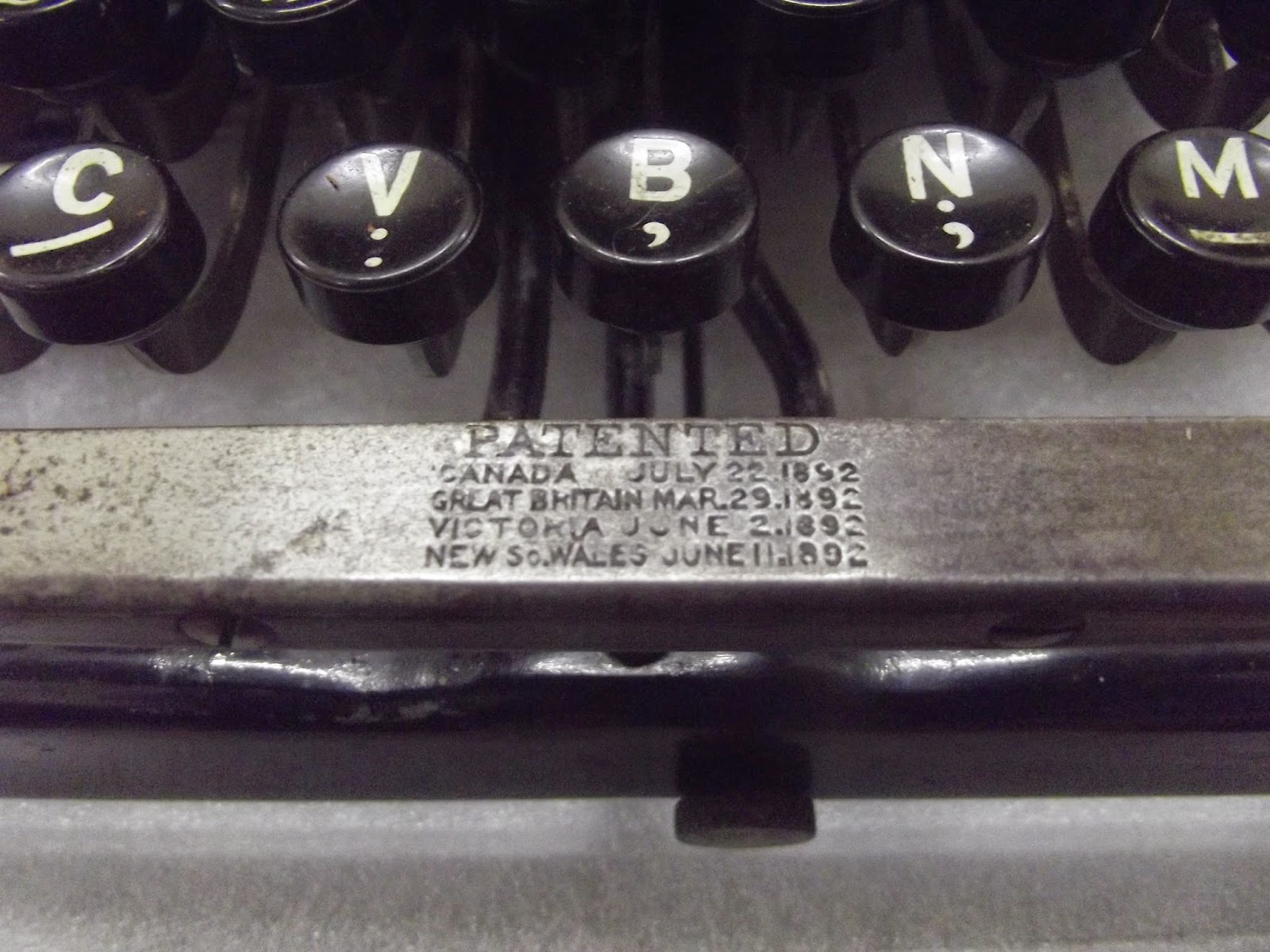 But as the patent dates indicate, they are for the original, conventional Empire. Here are some of the pages from Kidder's paperwork lodged with the Canadian Patent Office in July 1892:

*I suspect the Mr Bons who donated the Lightweight Empire to the Powerhouse came to Australia from Holland early in the 20th century.
Posted by Robert Messenger at 23:36

You know, the colonial patents are another very interesting topic historically.

Was the alligator case the one that holds the gold-plated Royalite in the Powerhouse? I came across the existence of one through trove.nla.au . It was a fuzzy black and white photo from the 1960s.

Hi,
My name is A.J.Bons , son of H.J.Bons.
The typewriter was donated by my father to the museum when i was a child.
The Date is totally wrong as my father is in his 80's and prob still alive and in Australia.
I myself live in the Netherlands.
Actually I was present as a child when my father typed that note as he typed it to me.
It was his sense of humor.
If i am calculating it right it must have been between 1973 and 1981 that he donated it
as he was selling off his collection.
I think it was 1981 when my father told me he donated the machine to a museum.