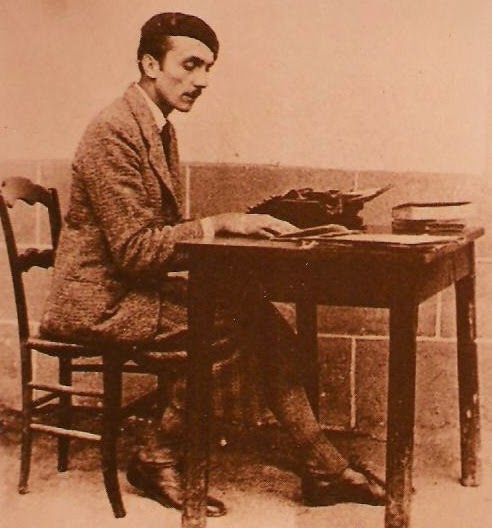 Otto Rahn at his typewriter. I think it is a Klein-Continental 34, first produced in 1933.  Rahn wrote two books linking Montségur and Cathars with the Holy Grail: Kreuzzug Gegen den Gral (Crusade Towards the Grail) in 1933 and Luzifers Hofgesind (Lucifer's Court) in 1937. After the publication of his first book, Rahn's work came to the attention of Heinrich Himmler, the head of the SS, who was fascinated by the occult and had already initiated research in the south of France. 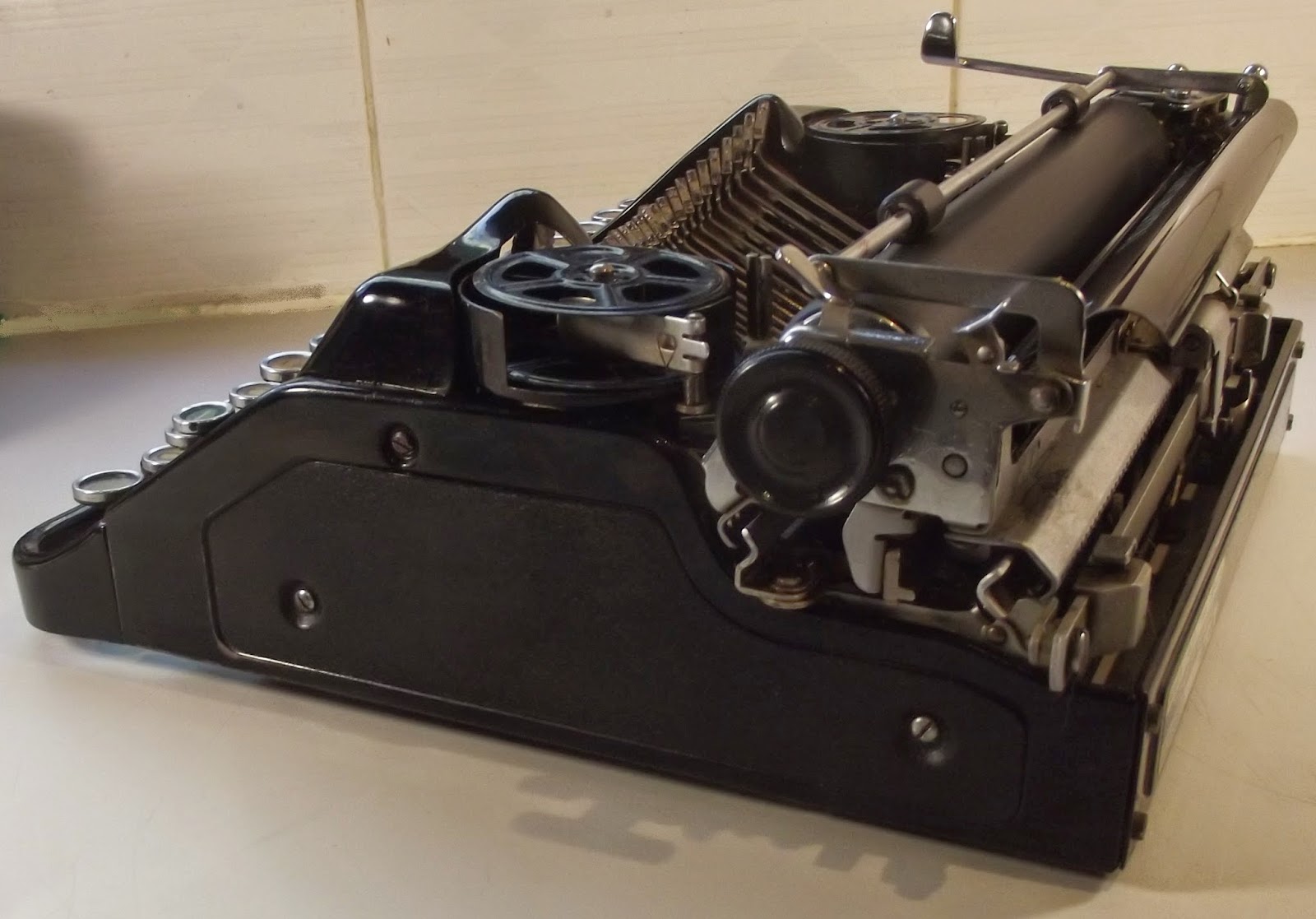 Two-minute preview only
The title of the SBS TV documentary was Himmler and the Holy Grail and the moment I saw it listed I thought of Indiana Jones and Raiders of the Lost Ark. 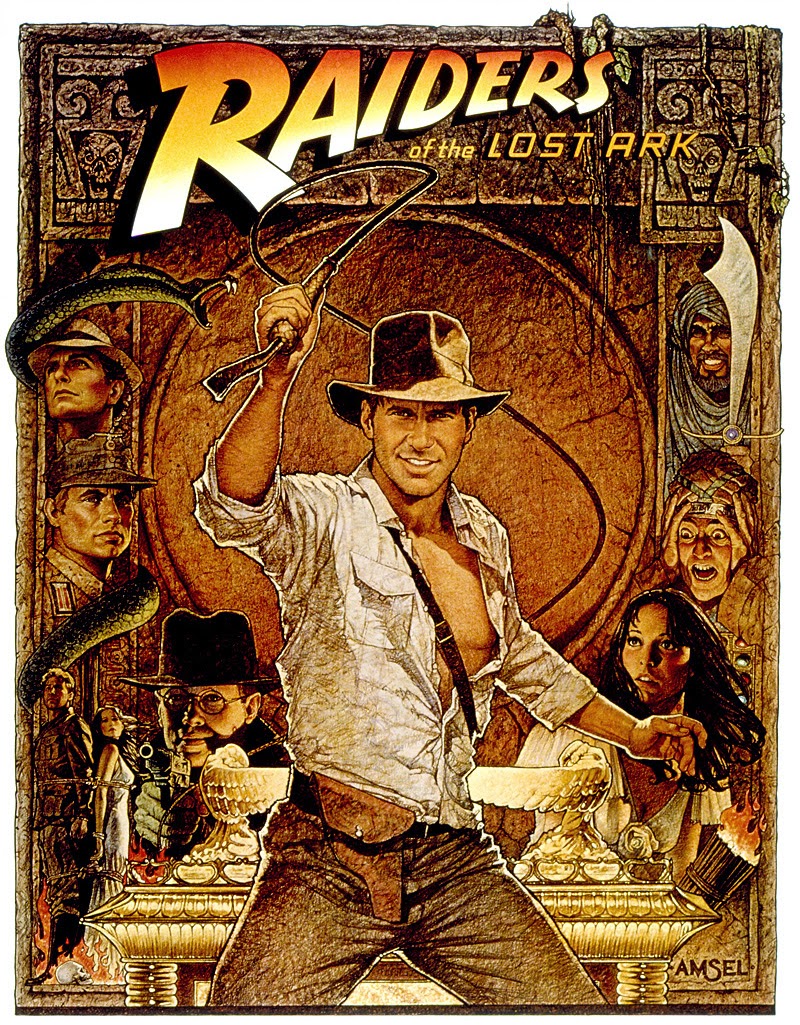 In Australia, the IMG Media documentary was screened a couple of weeks ago, as part of a series called Myth Hunters. But originally, apparently, the series was called Raiders of the Lost Past. The inference is obvious. And sure enough, it turns out many others (perhaps most notably author Nigel Graddon) have wondered whether Otto Wilhelm Rahn (1904-1939) was the inspiration for the Spielberg-Lucas big screen creation Henry Walton "Indiana" Jones. 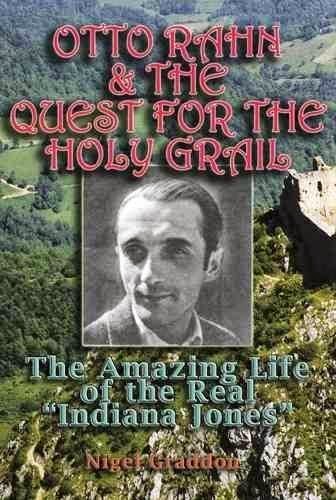 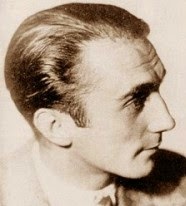 Rahn was certainly a rather remarkable man. Both gay and Jewish, he voiced anti-Nazi sentiments ("impossible for a tolerant, liberal man like me to live in a nation that my native country has become") yet still managed to become a high-ranking officer (Sturmbannführer = major) in the Schutzstaffel (SS).
(In the documentary, the uncredited actor playing Rahn uses a Royal portable, albeit one with a QWERTZ keyboard. I believe Rahn's real portable may have been a Klein-Continental. See image at top of post.) 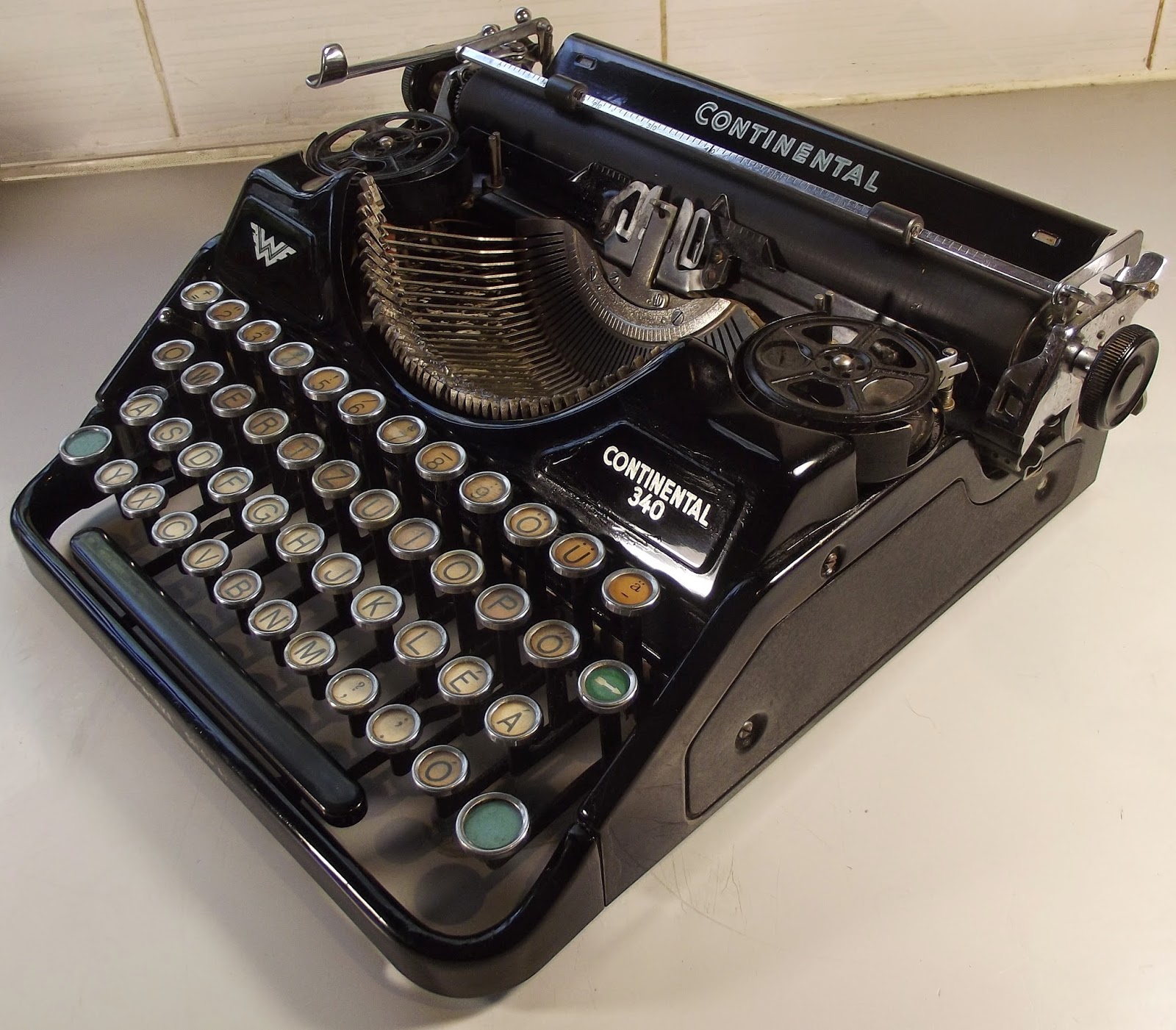 For the next week only, until April 13, 2014, the 49-minute documentary can be seen here, but be prepared to have to put up with some ads while watching it. 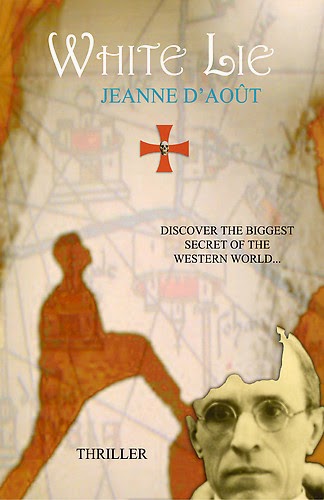 The image on the cover of Jeanne D'Août's book White Lie is of Otto Rahn, on the hunt for the Holy Grail, silhouetted in the Cave of the Hermit in 1932. 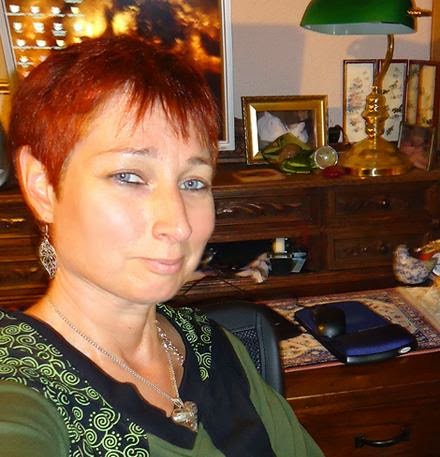 Featured heavily in Himmler and the Holy Grail is Jeanne D'Août, author of White Lie: The Secret of Otto Rahn - Relic Hunter, who dwells on the Indiana Jones connection. White Lie is promoted as "the story of the real Indiana Jones: Otto Rahn".
Rahn was a German medievalist and an Obersturmführer (First Lieutenant) of the SS, born in Michelstadt, Germany. From an early age, he became interested in the legends of Parsifal, the Holy Grail, Lohengrin and the Nibelungenlied. While attending the University of Giessen he was inspired by his professor, Baron von Gall, to study the Albigensian (Catharism) movement, and the 1244 Catholic crusade massacre that occurred at Montségur Castle in the Languedoc area of France. 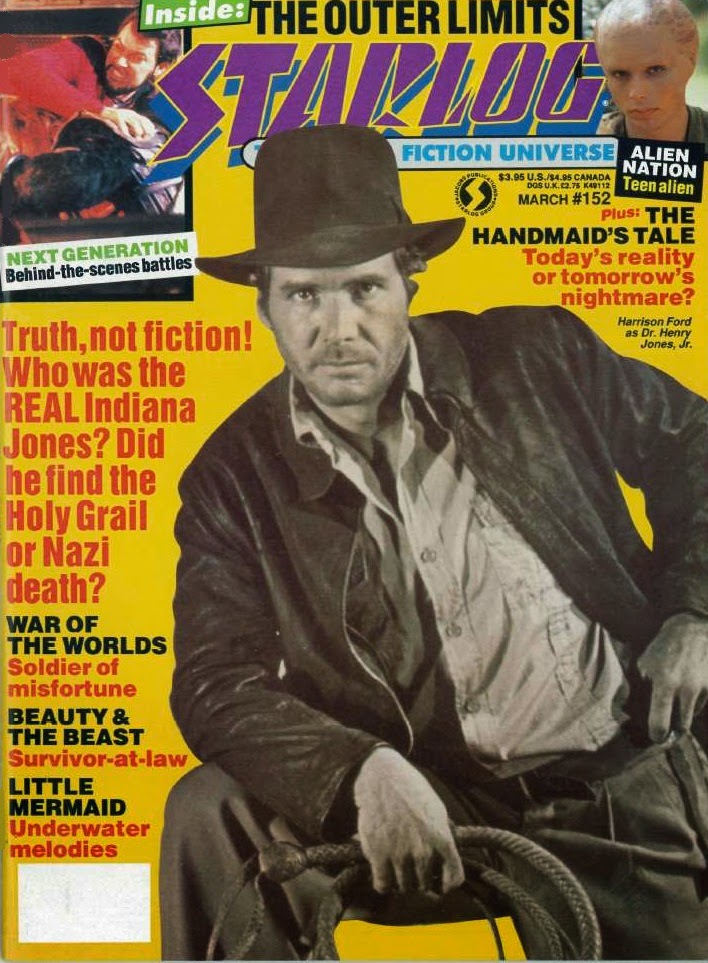 As far back at the March 1990 issue of Starlog magazine, Austrian-American academic, writer, film and cultural historian and producer Robert von Dassanowsky wrote a cover story headed “The Real Indiana Jones,” in which he identified Rahn as the Indy prototype. 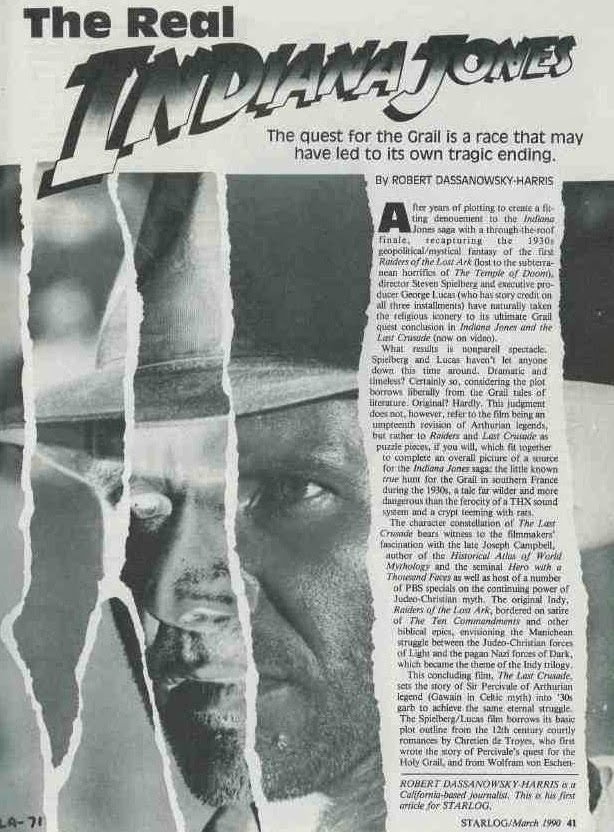 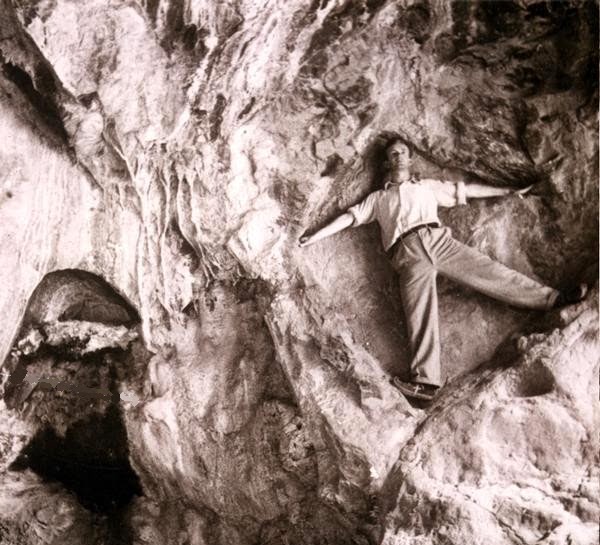 In May 2008, British newspaper the Telegraph ran a story by John Preston headed "The original Indiana Jones: Otto Rahn and the temple of doom".  Preston took the opportunity of Indiana Jones' return to movie houses in Indiana Jones and the Kingdom of the Crystal Skull to look at "the Nazi archaeologist who inspired Spielberg's hero", and found "a story more bizarre than anything the director could have dreamt of". 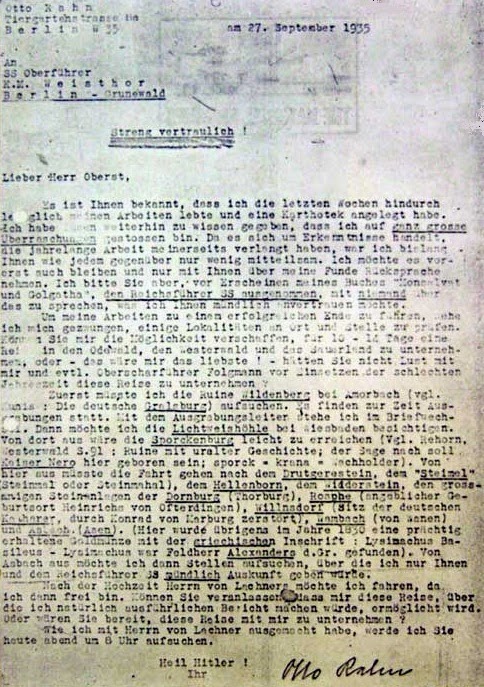 "Very little is certain in the short life of Otto Rahn. But one of the few things one can with any confidence say about him is that he looked nothing like Harrison Ford. Yet Rahn, small and weasel-faced, with a hesitant, toothy smile and hair like a neatly contoured oil slick, undoubtedly served as inspiration for Ford's most famous role, Indiana Jones.
"Like Jones, Rahn was an archaeologist, like him he fell foul of the Nazis and like him he was obsessed with finding the Holy Grail. But whereas Jones rode the Grail-train to box-office glory, Rahn's obsession ended up costing him his life.  However, Rahn is such a strange figure, and his story so bizarre, that simply seeing him as the unlikely progenitor of Indiana Jones is to do him a disservice."
"Hollywood has conferred a strange kind of immortality on Otto Rahn." 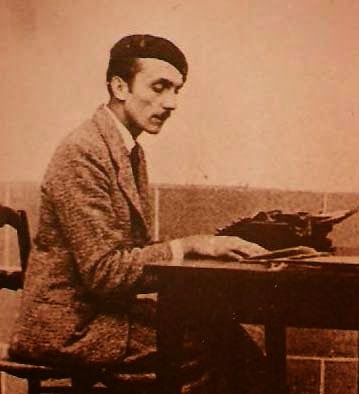 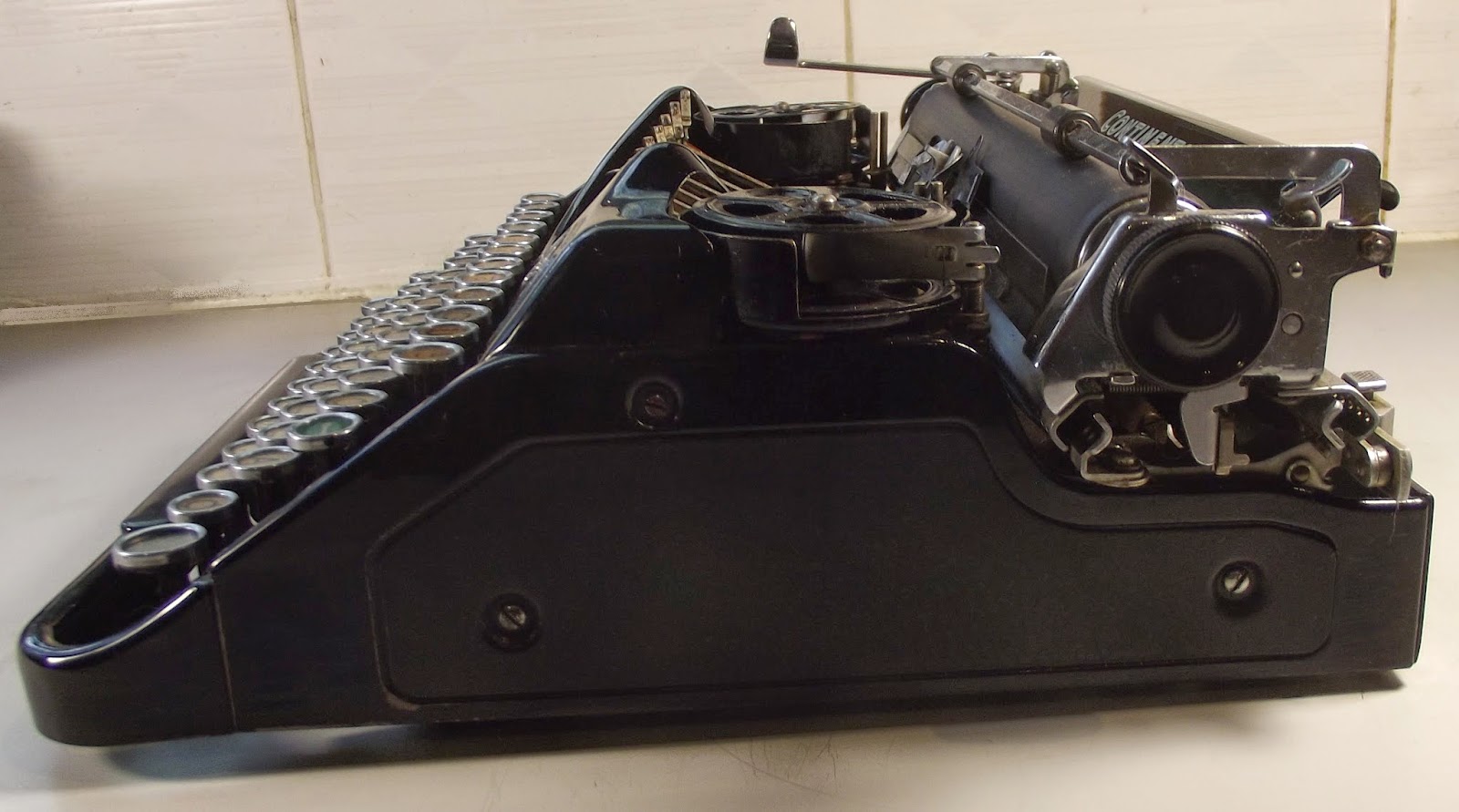 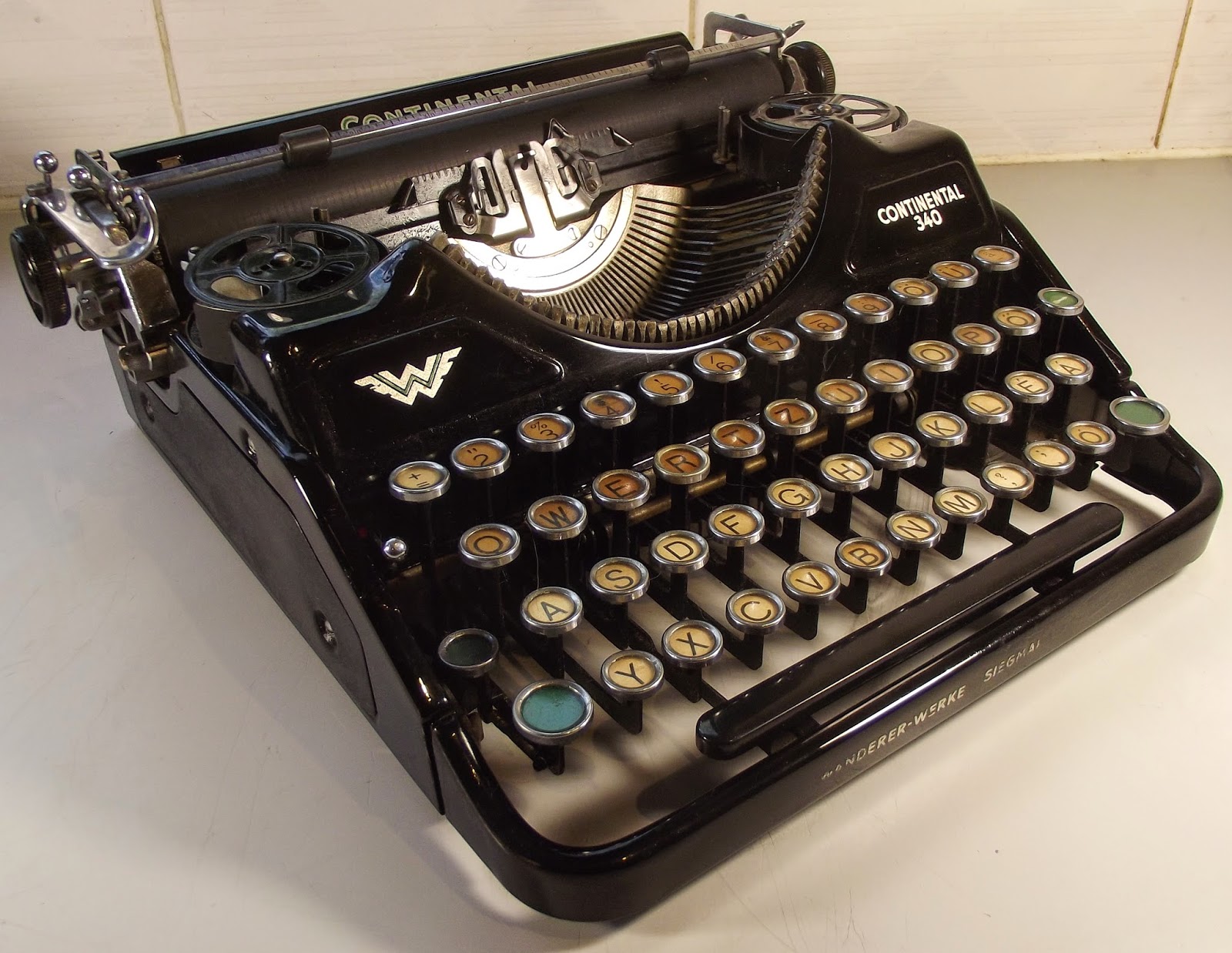 Another suggested inspiration for Indiana Jones was Professor George Edward Challenger, a character created in 1912 by Arthur Conan Doyle for his novel, The Lost World. Challenger was based on Doyle's physiology professor, William Rutherford, an adventuring academic, albeit a zoologist-anthropologist. A Corona 3 portable typewriter was used in the 1925 film of The Lord World, in which Wallace Berry played Challenger. 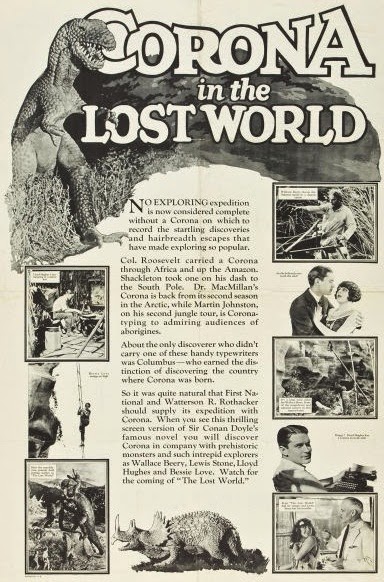 Posted by Robert Messenger at 11:39

Thanks for posting this. There was recently a brief story on one of the cable channels here about Rahn. I need to watch the documentary.