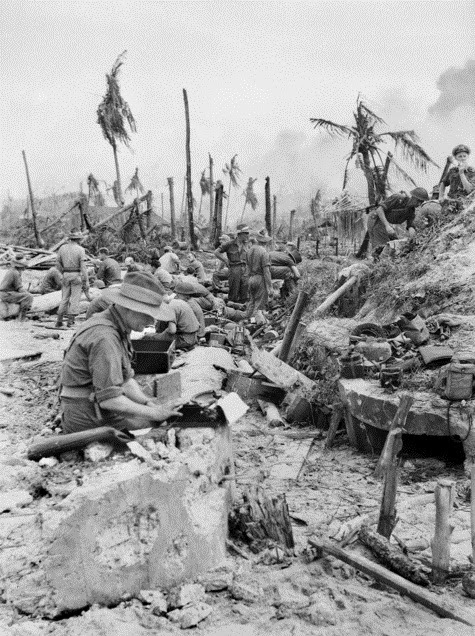 Rupert Charlett of the Melbourne Argus types his story about the Australian 7th Division landing at Balikpapan in Borneo on July 1, 1945. In the Battle of Balikpapan, the 7th Division, composed of the 18th, 21st and 25th Infantry Brigades, with support troops, made an amphibious landing after heavy bombing and shelling by Australian and US air and naval forces. The Japanese were outnumbered and outgunned, but like the other battles of the Pacific War, many of them fought to the death. The battle was one of the last to occur in World War II, beginning a few weeks before the bombing of Hiroshima and Nagasaki effectively ended the war. Japan surrendered while the Australians were combing the jungle for stragglers. 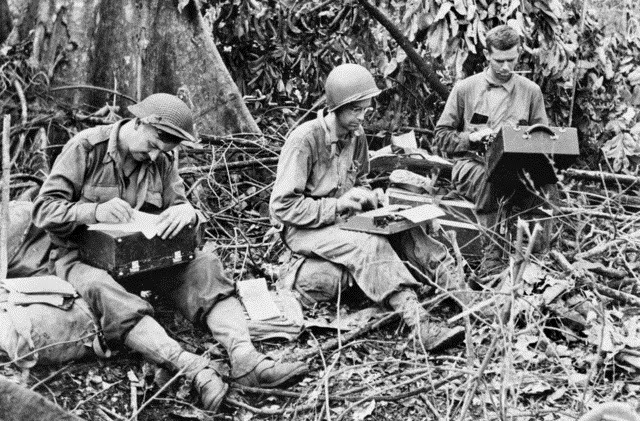 John Scarlett of The Sydney Morning Herald and the Melbourne Age with Ralph Treatsorth of United Press and Arthur Veysey* of the Chicago Tribune writing their first stories in the jungle for dispatch from Saidor after the successful landing by US forces on January 10, 1944. The Landing at Saidor was an Allied amphibious landing in Papua New Guinea. In Allied hands, Saidor was a stepping stone towards Madang, the ultimate objective of General Douglas MacArthur's Huon Peninsula campaign. The capture of the airstrip at Saidor also allowed construction of an air base to assist Allied air forces to conduct operations against Japanese bases at Wewak and Hollandia. But MacArthur's immediate objective was to cut off the 6000 Imperial Japanese troops retreating from Sio in the face of the Australian advance from Finschhafen. Following the landing at Saidor, the Japanese elected to retreat rather than fight, and withdrew over the foothills of the rugged Finisterre Range. During March 1944, B-24 Liberator bombers staged through Saidor for night attacks on Hollandia. *See a tribute to Veysey here.
Like so many Australian and New Zealand war correspondents, Melburnian Rupert Stanley Charlett and Sydneysider John Richard Scarlett were incredibly brave, resolute and resourceful journalists. But they also wrote wonderfully evocative stories, some of which can be seen below.
Charlett was born in South Melbourne in 1908 and died in South Caulfield, Melbourne, on June 6, 1984, aged 76. He continued to work as a journalist into the late 1970s. I believe Scarlett may have been born in Cooma in Southern New South Wales in 1903 and that after the war he lived in England and was a press representative for travelling English theatrical companies such as the Shakespeare Memorial from Stratford-Upon-Avon and the Old Vic. 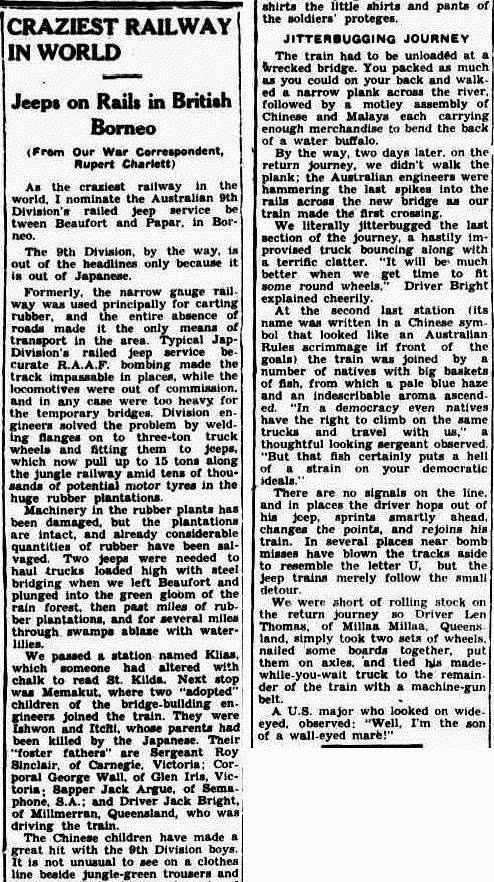 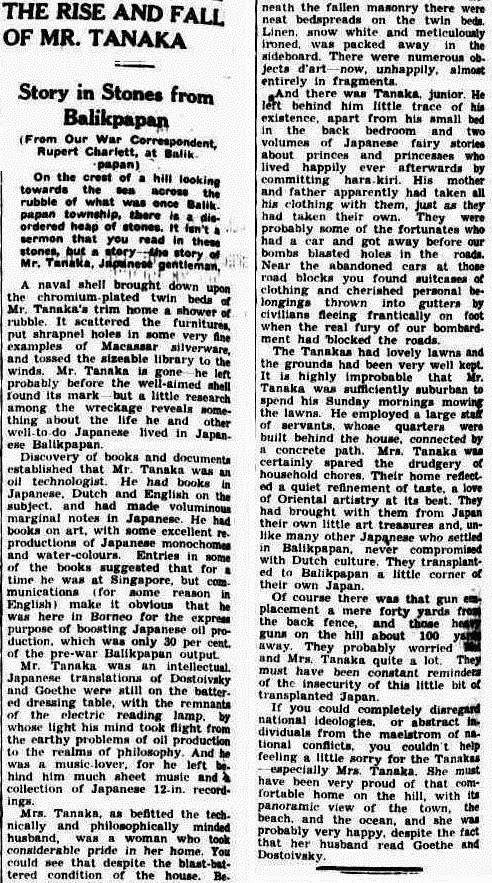 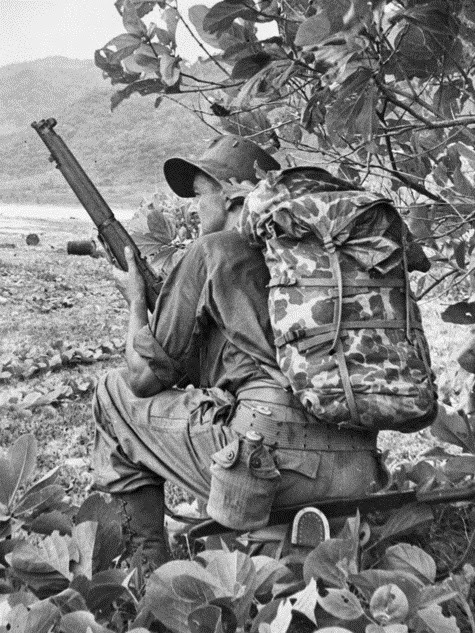 This photo of Scarlett caused quite a stir in military circles. Described as a "notorious example of dubious photographs from the Second World War", it was one of a series of images taken by the Department of Information photographer James Fitzpatrick of the Australian’s landing at But, in north-western New Guinea, on March 31, 1945. The army’s field censor refused to release some of these photographs because they appeared to have been staged. Consequently, those that were approved for circulation were considered something of a “scoop”. One photograph of Australian soldier Jack Redd, one of the first soldiers to land, was published in Australian newspapers during April and May. The photograph showed Redd crouching beneath a shrub, carrying a camouflaged backpack and a rifle. Its caption read, “One of the first Australians into But was Private Jack Redd of Sydney, here seen searching the area of But Jetty with a wary eye before advancing into enemy-held territory.” A few days later, however, General Thomas Blamey announced that the figure was not Private Jack Redd; indeed, no such soldier existed. Jack Redd = John Scarlett, get it? “Jack Redd” was in fact Scarlett. Fitzpatrick had taken the photograph while he and Scarlett were following a patrol: “Swinging my camera I noticed Scarlett intently concentrating on the movement of the patrol. Although it was a backview of Scarlett, it looked tense and a good news picture.” But the photograph required a context. Using a synonym of Scarlett’s name and a few loaded terms - “first,” “searching,” “wary,” “advancing” - Fitzpatrick created this dramatic context. Fitzpatrick’s photograph became highly controversial. On the one hand, it appeared to support one side of a long-running debate over equipment supply for Australian troops, and the commitment of the Curtin Labor government to Australian troops fighting in the south-west Pacific. When the Melbourne Herald published the photograph, for example, it asked why Redd’s clothing and accouterments were American. On the other hand, it undermined the public expectation that an official photograph would faithfully represent its subject. 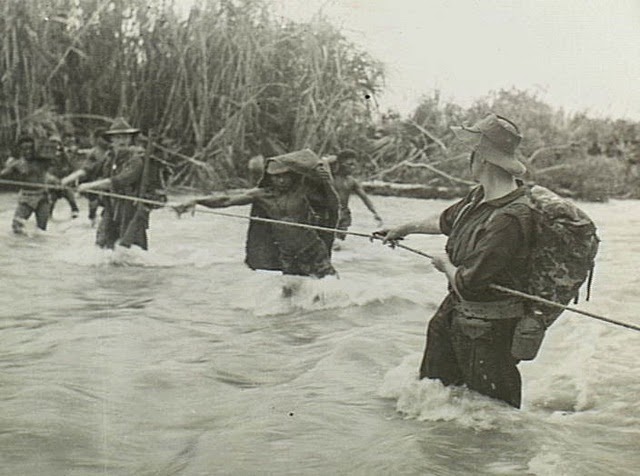 In the Aitape Sector in New Guinea in March 1945, Scarlett helps out troops in a river crossing on the advance up the coast near But. First across the flooded Ninahau River, he strains heavily on a rope, to ensure a safe footing for weary troops and native supply carriers. 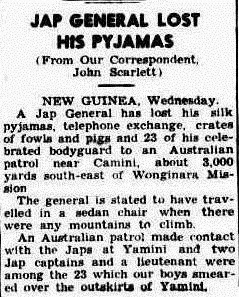 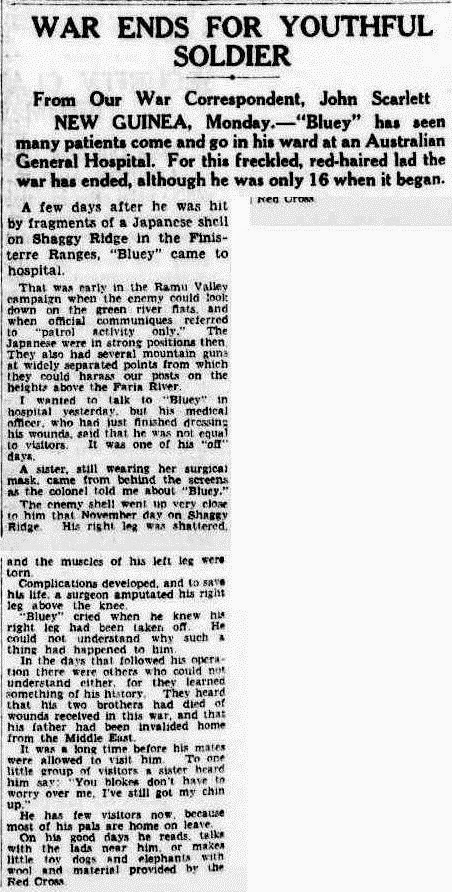 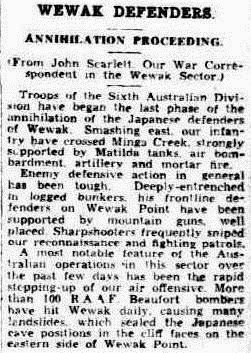 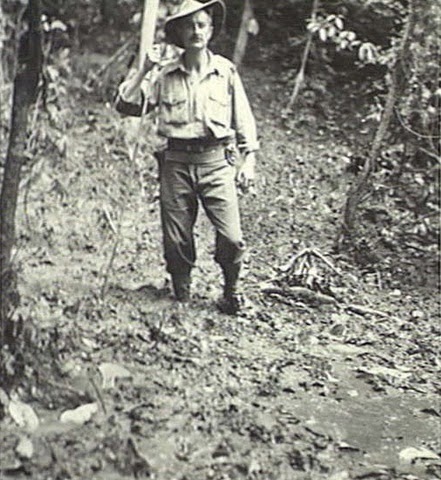 On Cam's Saddle in the Finisterre Range of New Guinea, Scarlett ploughs through mud between Crater Hill and Mainstream Junction. 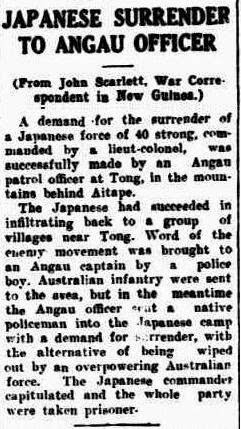 Posted by Robert Messenger at 21:46

Forgive my ignorance, but what does ANZACs mean?
Is it an Aussie term, or one from another era?! I did live in Australia, but I was 2 or 3 years old.
Thanks

Donald, don't apologise for asking. This is a question Australians and New Zealanders are asking themselves, right now, on Anzac Day, April 25. Ostensibly, Anzac stands for Australian and New Zealand Army Corps. But it has come to mean much, much more. So much more, we don't exactly know ourselves just what it stands for anymore.
This is one of those "Is there a Santa?" or "Is there an Easter Bunny?" questions. Last night on TV, there were laments that Anzac Day is becoming increasingly commercialised, like Christmas and Easter. Some guy wanted to sell breast implants based on the Anzac spirit! It has gotten out of hand.
It may seem extremely ironic to many, but on Anzac Day we mark our horribly failed attempt, vat massive human cost, to invade in 1915, on behalf of our "masters" in "Mother England", the nation of Turkey. By "our" I mean both NZ and Australia.
Yet Anzac Day has come, at least in Australia, to represent our "coming of age", our "nationhood", as if this marks national independence, rather than, say, Federation in 1901.
As such, it means more - irony upon irony - than Australia Day, which marks an English invasion of Australia, or New Zealand Day, which marks a (temporary) cessation of wars against the native Maori. Most notable New Zealand war correspondents, by the way, covered the Maori Wars, not the Boer, World War I or II or Korea or Vietnam!
So, Donald, yours is a vexed and complex question. The simple answer: Australian and NZ Army Corps. But what has it come to really mean? Certainly not any form of increasing unity between NZ and Australia, quite the opposite. We are very like-minded people, but NZ in terms of cutting the apron strings with "Mother England", far closer to becoming a republic with its own flag, for example. And a lot of that has to do with far different treatment, historically, of native people. In NZ, imperialist Britain had no choice than to fight against a powerful warrior race, in Australia it simply subjugated the native race and pretty much destroyed it.
So what is there to celebrate? That's the question. Death at Gallipoli? Yes, I think that's still at the core of it. But Australians, at least, have come to see "Anzac" as representing the qualities they like to see in themselves: guts, determination, "manliness", etc etc. But it cannot be said to reflect "free-spiritednesss". When the Union Jack disappears from our flag, and we cease to have as Governor-General, yes, maybe then. But only then ...

PS: Re Gallipoli. Although WWI, notably the Western Front, wiped out the young men of most of one whole generation in each country (NZ's ratio of war dead, for example, is disproportionately high against its population), NZ and Australia believed this huge sacrifice showed they were "real nations" in their "own right", nations which could stand up for themselves and reflect their national identity. Does that make sense? I'll let you be the judge of that!

Thanks Robert for your answer to my question! Good to know the literal meaning, and the rest - I think I get a sense of it. I should ask my brother if he's heard of this, as being born a Kiwi, he probably knows more about his roots than I do. Our whole family did live in Wellington, where I went to nursery school. I still remember the school room, our house overlooking Wellington harbour, and the night our house caught on fire because of a spark from a steamship in the harbour. I'll also never forget our long back and forth trips to San Francisco on Pan Am Stratocruisers - with real cooked meals, and overnight sleeping berths like on trains!
PS: I do think of them as their own countries today

Thanks Robert for answering my question. I'm glad to know the literal meaning, and pretty sure that I get a sense of the rest. I should ask my brother if he's heard of the term, as being a Kiwi himself, he may have more of a knowledge of his roots.
We did as a family live in Wellington, overlooking the harbour. I still remember my nursery school classroom, our house, and the night our house caught fire from a spark from a steamship in the harbour! I also remember the many long flights back and forth between San Francisco, and both Wellington, and Sidney, over the years. We flew then in Pan Am Boeing Stratocruisers that had three home cooked meals inflight, and sleeping berths like on trains. What fun!
PS: I do now think of Australia, and New Zealand as their own countries!

Wow, I am so happy to have come across this blog. Rupert Charlett was my Great Uncle. I have so many wonderful memories of this beautiful, caring man. One of them being his magnificent type writer and his study lined with book cases, filled with books. I used to get so much pleasure just from looking at them. I was so lucky that Uncle Rupert would let me sit at his beautiful big timber desk and type in his magnificent type writer. I thought I was the luckiest girl in the world! Just one of my wonderful childhood memories of our many holidays spent at Uncle Rupert's home in South Caulfield.