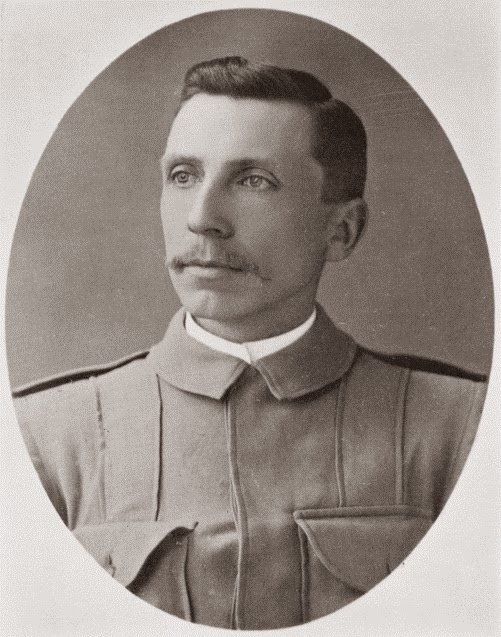 Scottish-born William John Lambie (1860-1900), the first Australian war correspondent to die in the course of carrying out his duties.

Lambie was killed outside Jasfontein in the Northern Cape Province and is buried at Colesberg, Pixley ka Seme District. 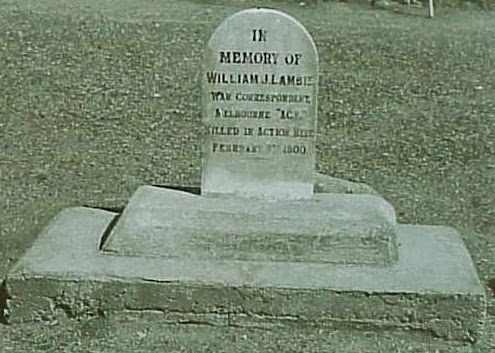 We started this series with the announcement of plans to have a memorial here in Canberra for Australian war correspondents. Just such a memorial for Boer War casualties was unveiled in St Paul's Cathedral, London, England, in March 1905, and one of the correspondents thus honoured was an Australian, William John Lambie. The memorial was unveiled by Field Marshal Frederick Sleigh Roberts, 1st Earl Roberts VC, who led British Forces to success in the Second Boer War. 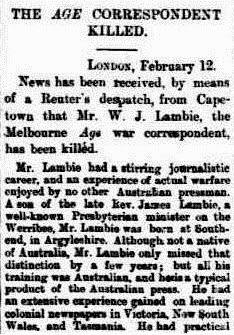 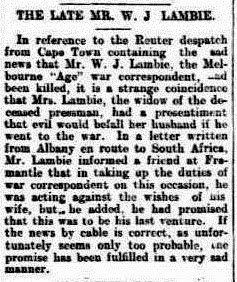 William John Lambie was born on March 28, 1860, in Southend, Argyll, Scotland, the son of the Reverend James Lambie and his wife Agnes Colquhoun Jaffray. He arrived with his family in Australia from London on the Winefred on April 7, 1863.
William Lambie first saw duty as a war correspondent in the Sudan in 1885, when he was accredited for The Sydney Morning Herald. Accreditation allowed war correspondents to "draw food and fodder rations [and] tacit permission to use the military’s telegraph for censored dispatches and entitled them to campaign medals.” However, an outstanding act of bravery by Lambie did not earn him a medal, as the British War Office refused to recognise the services of non-combatants. Lambie had distinguished himself by riding through enemy lines with despatches.

When Arab armies laid siege to the city of Khartoum and its British defenders, the general staff ordered a relief expedition. Frank Le Poer Power of The Times of London and Lambie volunteered to accompany this operation. As it sailed down the Nile bound for Khartoum, Sudanese fighters ambushed the flotilla; in the bitter fighting that followed, Lambie was wounded and Power murdered.
Another, more contemporary version of events, was that in May 1885 "Two newspaper correspondents while returning here were surprised by a few of the rebels. Both had to spur hard for Suakin [or Sawakin, a port in north-eastern Sudan, on the west coast of the Red Sea] closely pursued by their assailants. They happily succeeded in shooting down two or three of the rebels, upon which the remainder desisted. Mr Lambie, one of the gentlemen so surprised, sustained, however, a severe wound in the leg." The Glasgow Herald added: "Whilst Mr Lambie, the correspondent of The Sydney Morning Herald, was riding back to Suakin ahead of the column he was suddenly shot through the leg."
In September 1888, Lambie was in Samoa when Mata'afa Iosefo (1832-1912) commanded followers in a rebellion against the German-backed Tamasese, who was proclaimed Tafa'ifa, or King of Samoa. In the battle  Mata'afa's warriors send Tamasese's forces retreating to Mulinu'u Point, where a German gunship offered protection. After an ensuing bombardment of his villages, Mata'afa retaliated by wiping out an invading German contingent and plundering the German plantations at the First Battle of Vailele. Eventually Germany, the United States and Britain agreed that Malietoa Laupepa would be restored as the Tafa'ifa of Samoa.
Announcing Lambie was returning to war correspondence duties in South Africa, on December 21, 1899 the Freemans Journal reported: "Mr W.J.Lambie, who is representing the leading Australian Liberal daily the Melbourne Age at the seat of war, can make a boast that no other living war correspondent can utter. He is the only pressman who has seen Germany defeated since the Franco-Prussian War [1870-71]. He was an eye witness of the annihilation of a German force by Mata'afa and his warriors in Samoa." 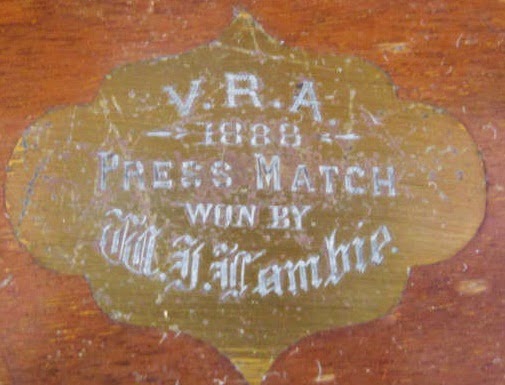 The same year he was in Samoa, 1888, Lambie won the Victorian Rifle Association "Press Match" competition at Williamstown rifle range. 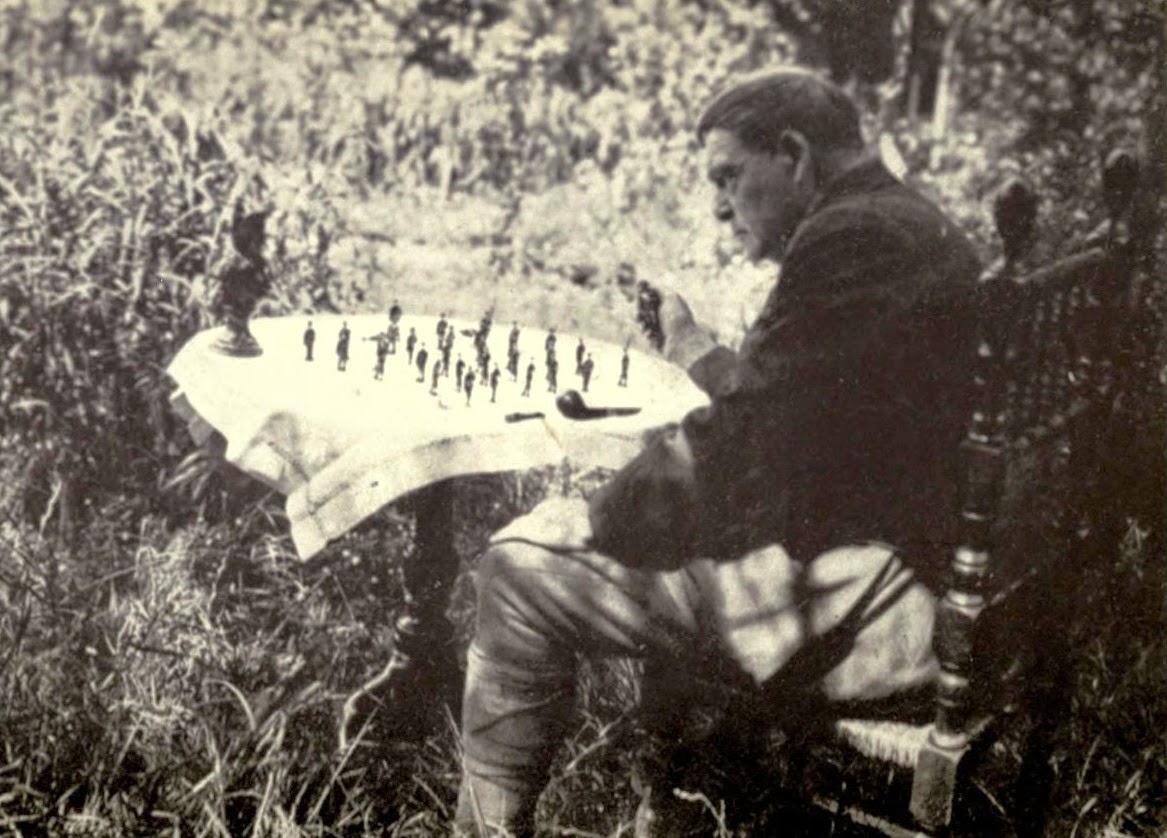 Alfred Greenwood Hales in South Africa, 1900
Lambie's return to the African continent in 1899 was for both The Age of Melbourne and The Sydney Morning Herald. He was attached to the 1st Australian Regiment - the pre-Federation unit combining contingents from all the Australian colonies. On February 9, 1900, an Australian patrol made up of 30 Victorians and 18 Tasmanians left Rensburg base to determine the strength of the Boers south of Rensburg Siding. The patrol was accompanied by Lambie and Adelaide-born Australian colleague, Alfred Arthur Greenwood (Smiler) Hales (1860-76), who was reporting for the London Daily News. The group split in two, with the Tasmanians and journalists going ahead, but Lambie and Hales became separated from the soldiers. According to Hales, he and Lambie were comparing notes some distance behind the Tasmanian troops when 40 Boers of horseback dashed out of a ravine and demanded they surrender. “We refused and tried to gallop through the rain of lead that whistled around us,” wrote Hales later. “The Boers fired a volley after us, and Lambie fell dead with two bullets through his head and one through his heart.”

A.G.Hales
"Lambie's big chestnut mare had gained a length on my little veldt pony, and we were not more than a hundred yards away from the Mauser rifles that had closed in on us from the kopjes. A voice called out in good English: 'Throw up your hands, you damned fools'. But the galloping fever was on us both, and we only crouched lower on our horses' backs, and rode all the harder, for even a barnyard fowl loves liberty. All at once I saw my comrade throw his hands up with a spasmodic gesture. He rose in his stirrups, and fairly bounded out of his saddle, and as he spun round in the air I saw the red blood on the white face, and I knew that death had come to him sudden and sharp."
When told that Lambie and Hales were war correspondents, the Boer leader told Hales, "Sir, you dress exactly like two British officers; you ride out with a fighting party, you try to ride off at a gallop under the very muzzles of our rifles when we tell you to surrender. You can blame no one but yourselves for this day's work." 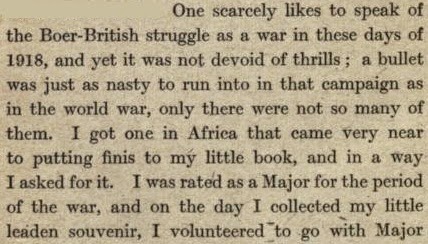 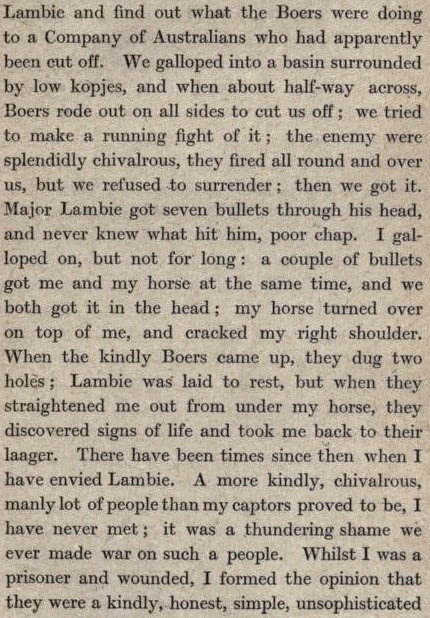 De la Rey received them with courtesy and took them to the farm owned by Hendrik Kotze, Jasfontein, were the grave was. Hales were taken by the Boers to the Volkshospitaal in Bloemfontein. In December 1905 Lambie's body was exhumed and reburied in the military cemetery of Colesberg. 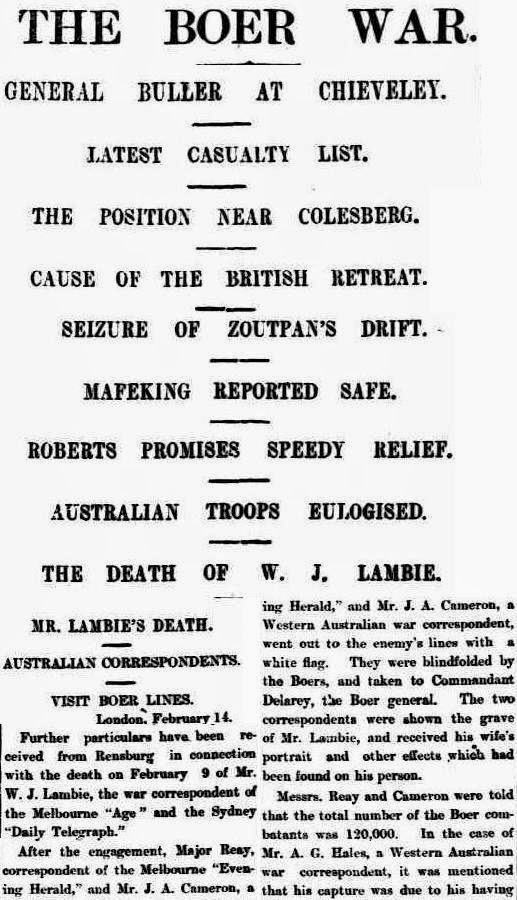 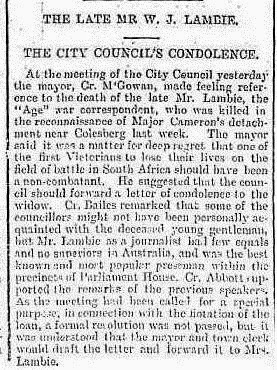 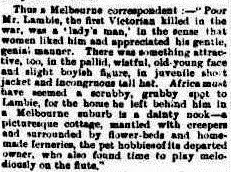 Incredibly, in the weeks following his death, Australian newspapers continued to publish reports written by Lambie before he was killed. I don't think I have ever seen that happen elsewhere: 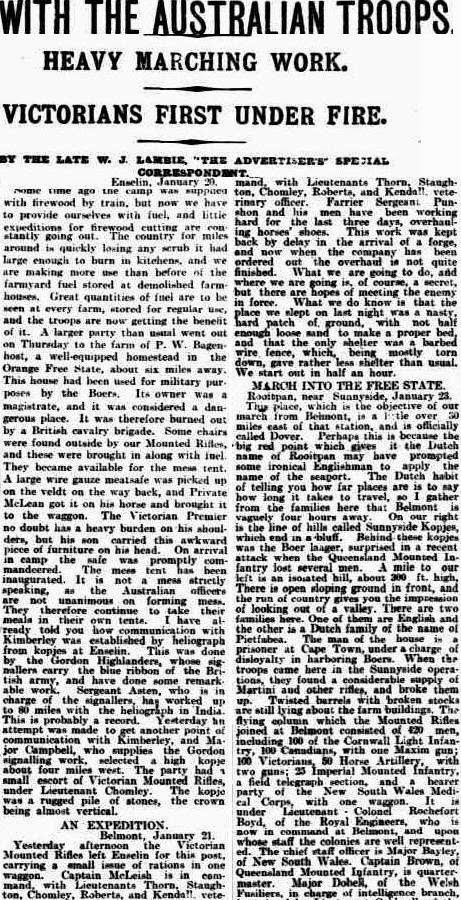 These were published just before he died. 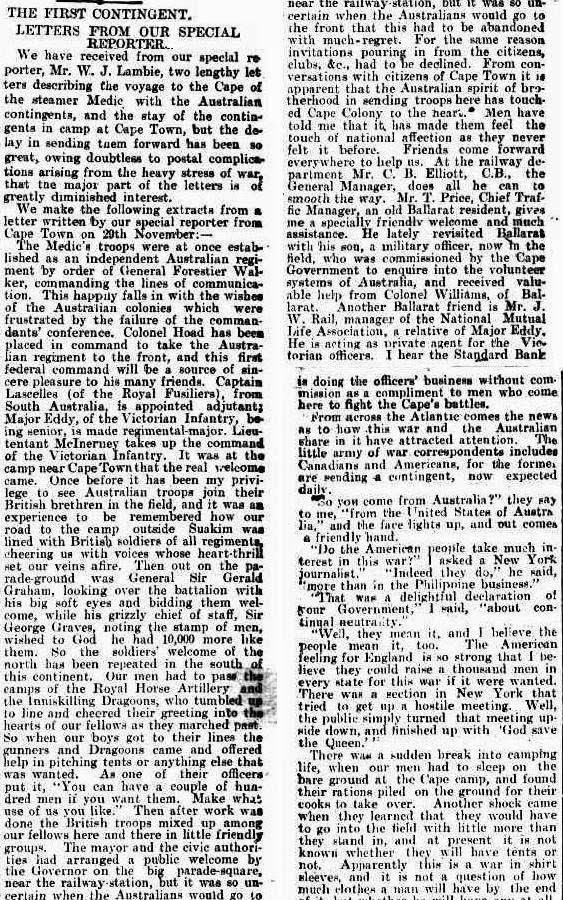 Posted by Robert Messenger at 01:35

Amazing how much information and photos you find on these subjects. I know almost nothing about the Boer War, at least until now. Makes me want to get out my atlas and see where some of these events happened, and also get an education - Thanks

William John Lambie was my great grandmothers brother I really enjoyed reading all you have put together about him.I have been researching him since 1983 as I grew up knowing about him and his adventures from my mother.
Susan Oliver