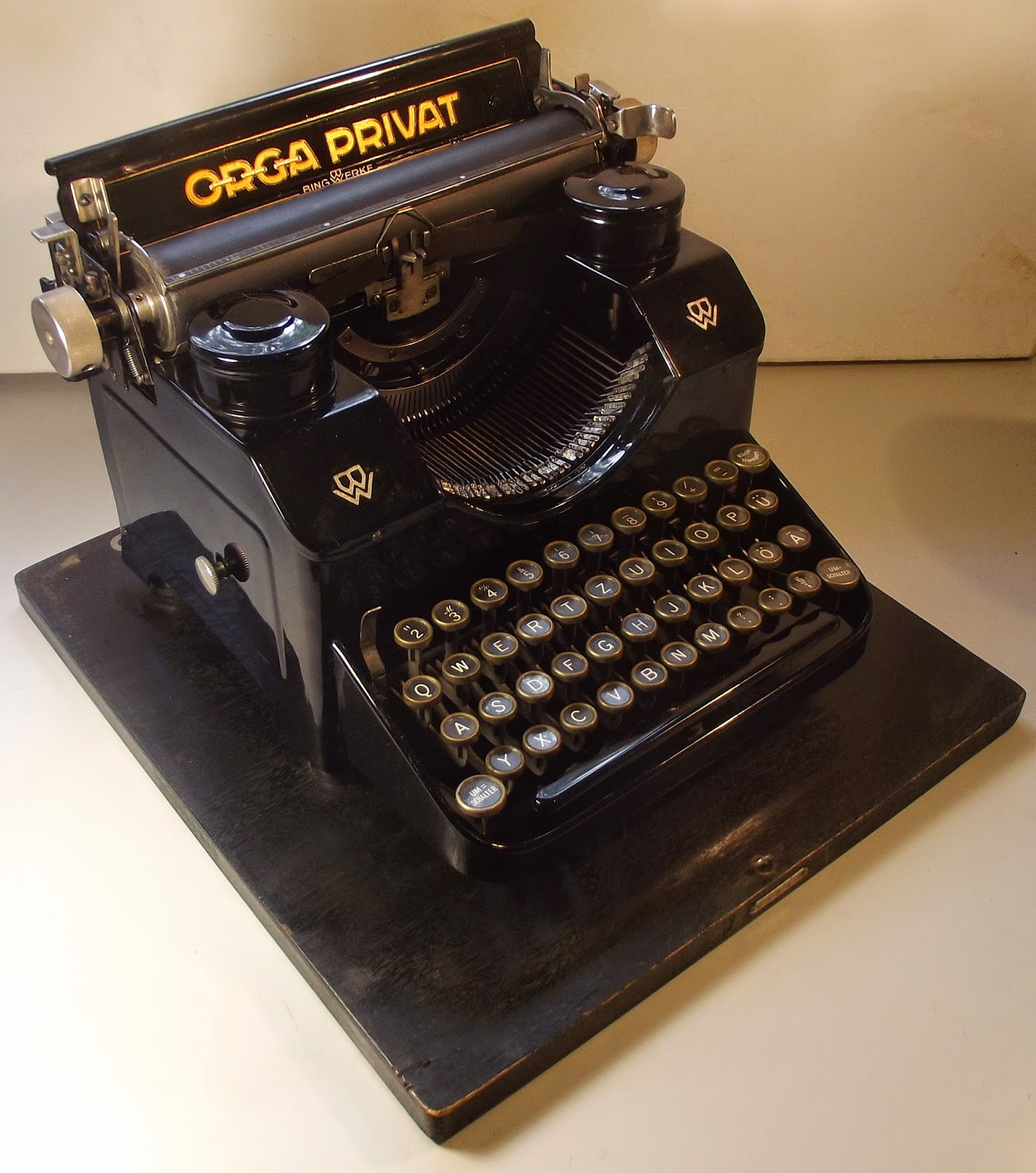 Today was the first time I have been able to type with this Orga Privat, although I have owned it for many months. And I have John Lavery to thank for the pleasure, a wonderful experience for me. 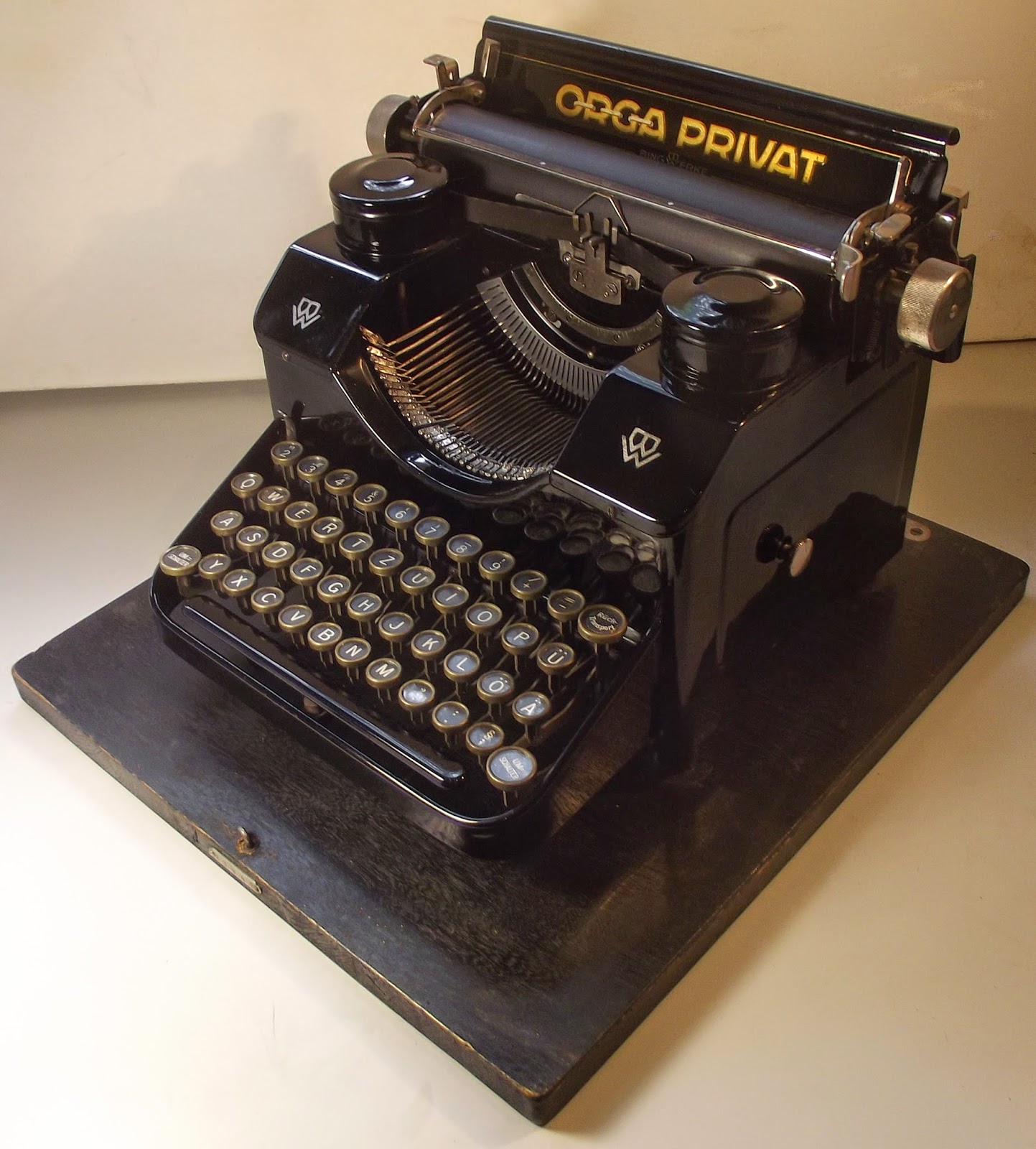 The Orga had arrived damaged from Germany, probably the reason I got it at such a good price - it wasn't obvious in the eBay listing. It was very well packed, and there was no sign on the box of any transit damage. Nor was there was a mark on the shiny black metal case, nor on the typewriter itself. Yet the back left boot was badly twisted up under the typewriter (again, no trace of any paint damage). All that was a bit of a mystery - but the fact that the boot was buckled in this way (pretty hard to do, since the metal is so thick and rigid) meant the inner workings were all out of kilter and the machine couldn't type. 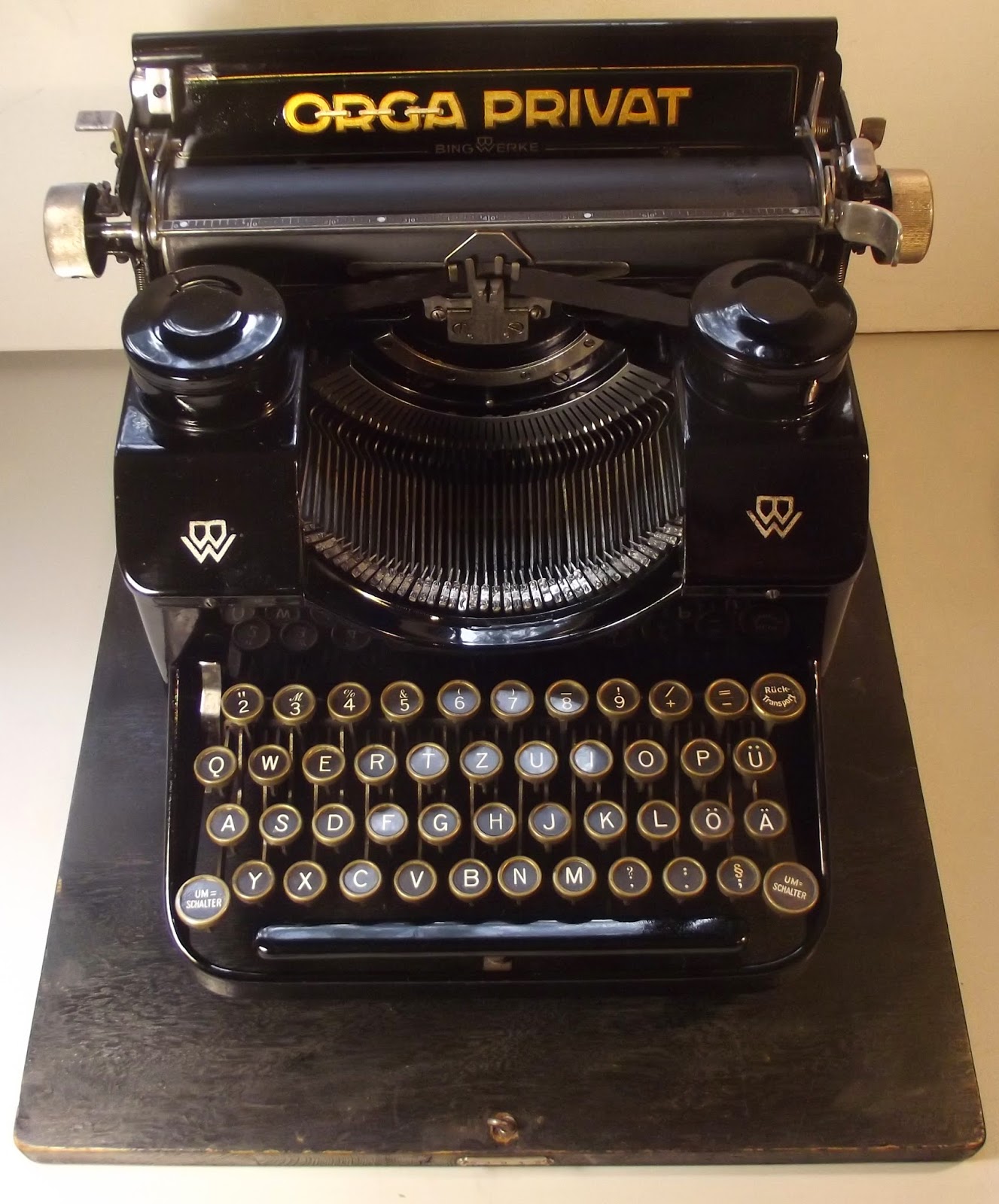 Incredibly, John Lavery ("McTaggart's Typewriter Workshop") has got it working again. And in remarkably quick time. 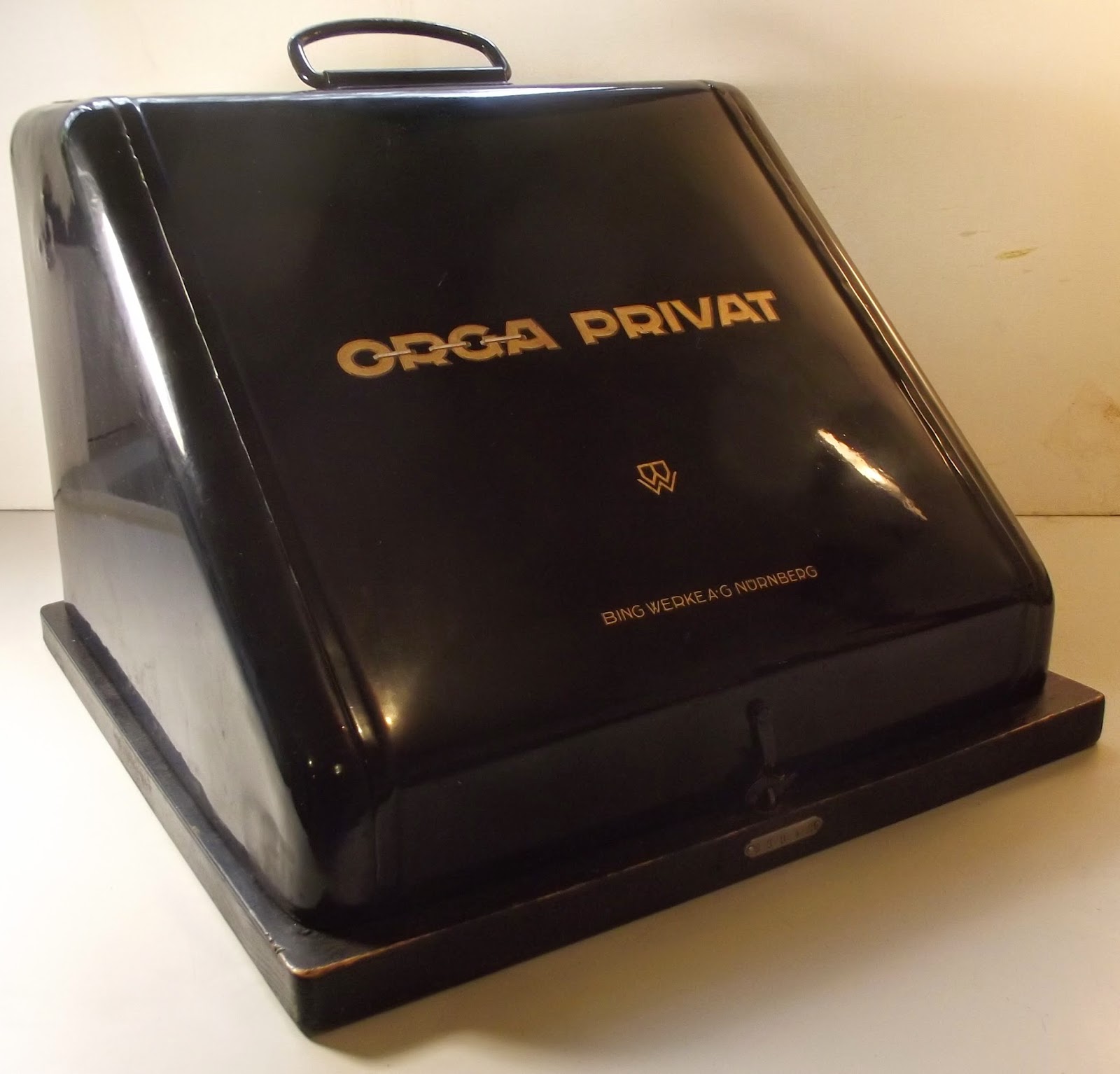 I took the Orga, along with a few other typewriters with which I was having major problems, to the Type-In in Brisbane on March 9,  and asked John if he would be so kind as to have a look at them for me. Fixing them was way beyond my limited range of skills. John took them back with him to his home in Beaudesert in Queensland. 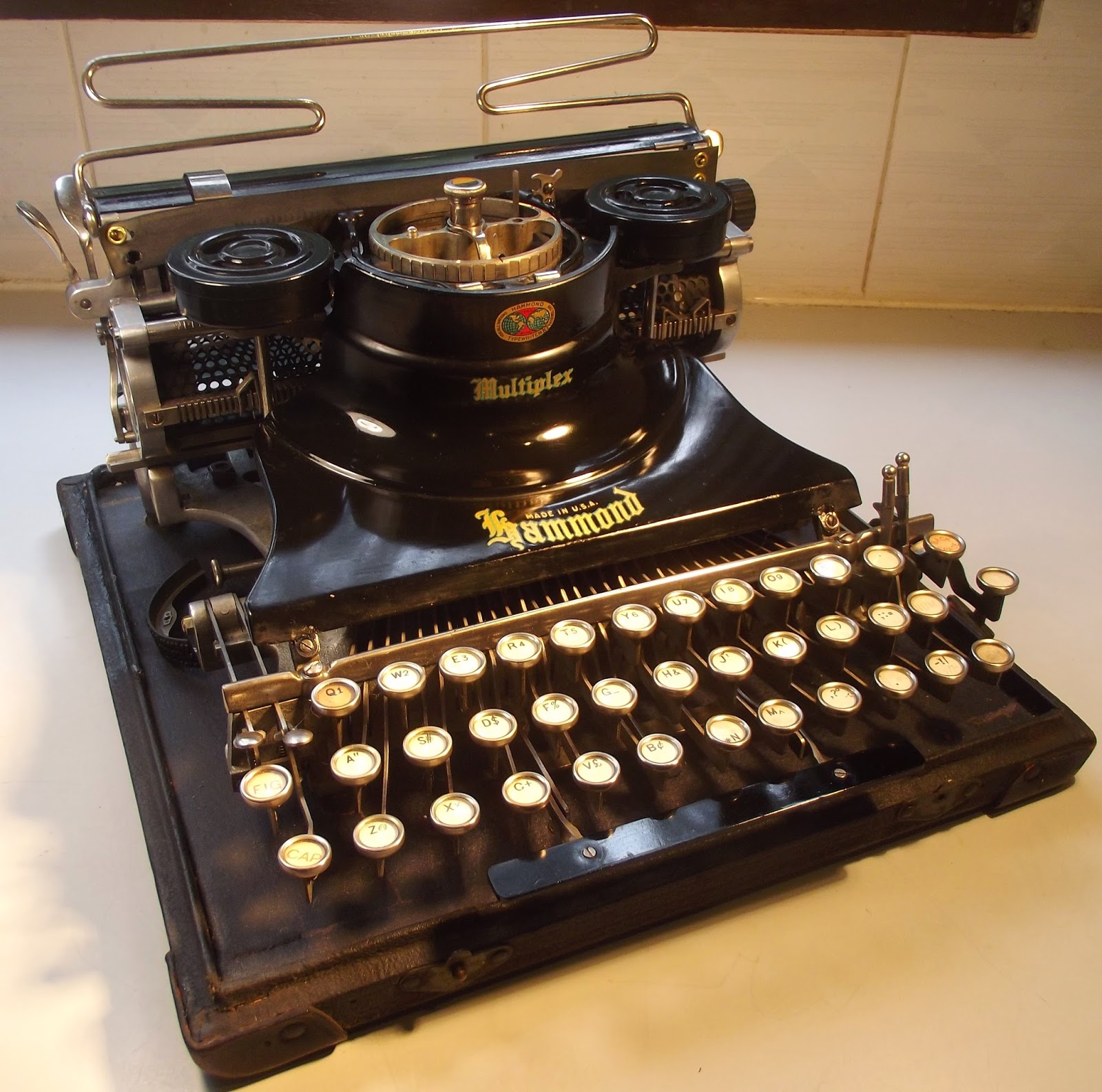 In the intervening three weeks, John kept me informed of progress. Not once did he claim he was having unqualified success, but I knew that that was his unassuming way.  I was confident that whatever he was doing for my typewriters, it was the very best care they could possibly receive. And I was right.
John told me he and his wife Margaret were driving down to Wellington in New South Wales this past week, and I could pick my repaired typewriters up from there.  So I drove to Wellington yesterday, returning home today a very happy man, with hitherto non-working typewriters working once more.
Above is the Hammond Multiplex which had caused me enormous angst, with a broken lever under the machine preventing the left-side keys from lifting the shuttle into position properly. John put it all back together for me. The man's a genius. 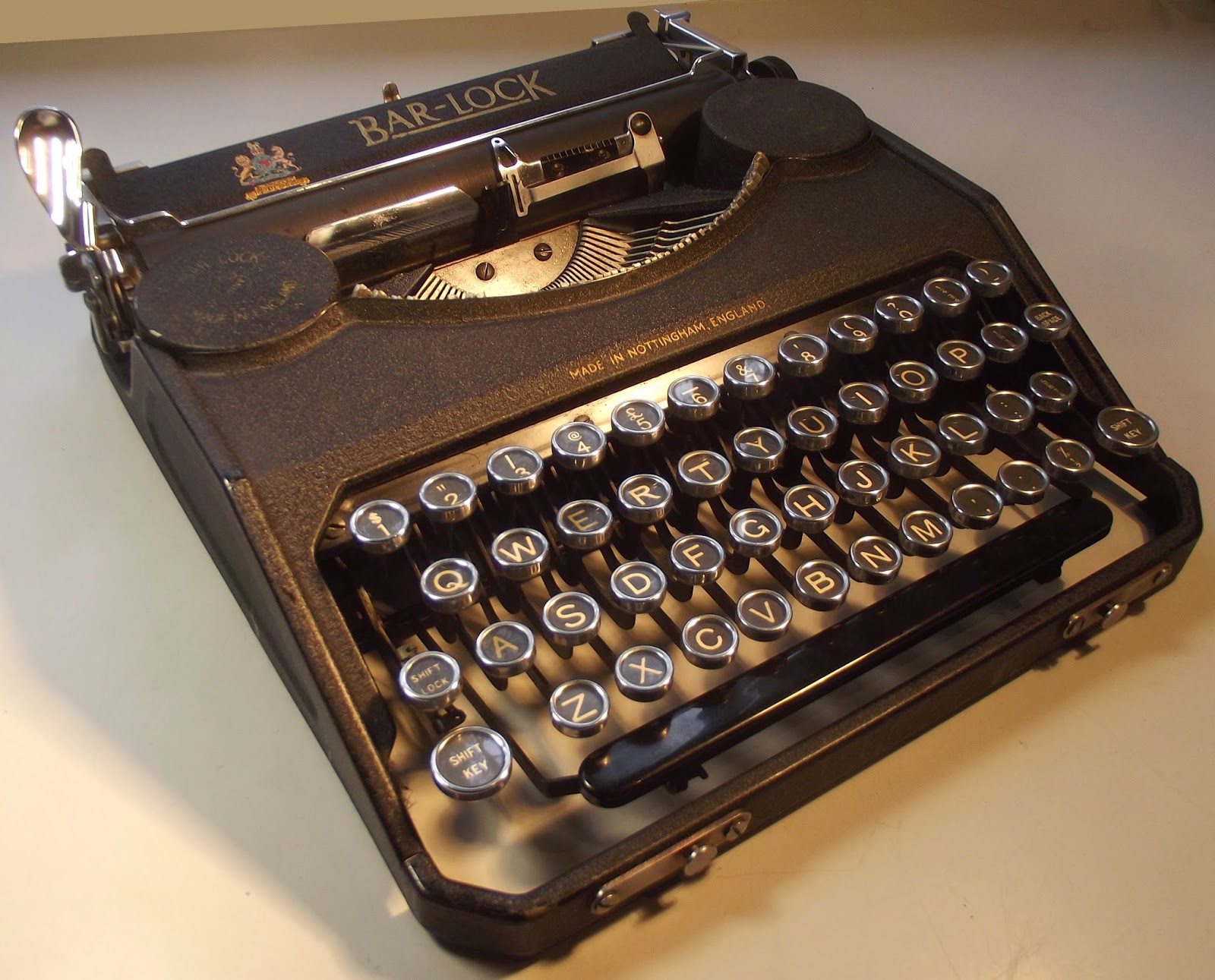 This Bar-Lock portable presented an even greater challenge for John, as a threaded rod running under the machine had snapped, but he has managed to get it typing beautifully. 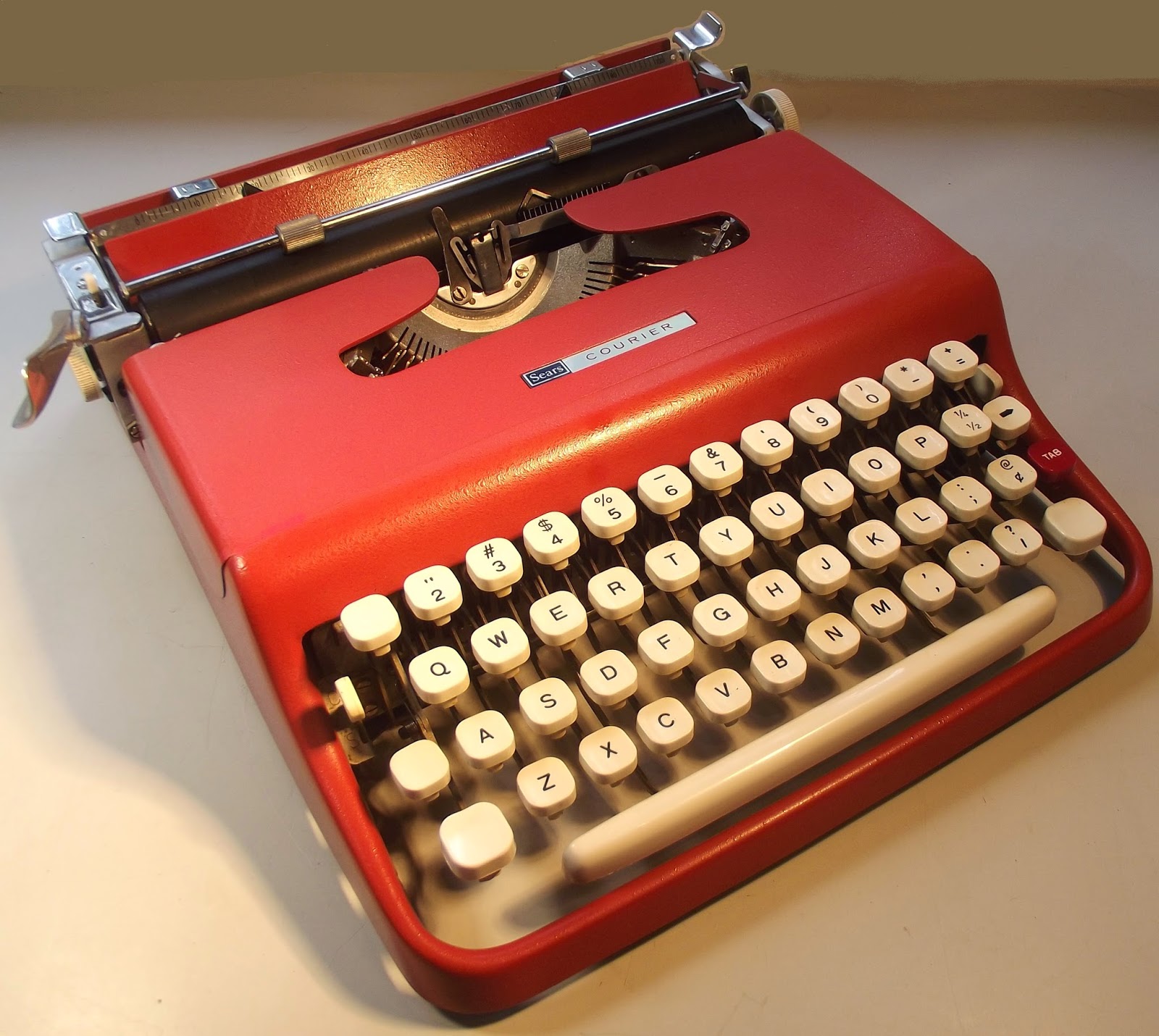 If I thought I was having a run of bad luck with IBM Selectrics (see previous post), it was nothing compared to Mexican-made Sears Couriers (Lettera 22s), the first Olivetti portables to penetrate the US market. I have now owned three, and everything that could go wrong with them did (Murphy's Law transferred to portable typewriters!). For many years this was exceedingly frustrating for me, but finally, thanks to John, I have a fully operational Sears Courier. What a relief! I won't even begin to try to explain what was wrong with this one (had to do with a star wheel trigger and the escapement rack).
When I arrived in Wellington, after a tortuous drive up from Canberra (it should have taken less than four hours, even in driving rain, but finished up taking 5 1/2 hours), Margaret calmed me down with a cup of coffee and John and I were soon swapping typewriters and typewriter parts from car boot to car boot. After I had loaded my repaired machines, and given John many boxes of spare parts, John took an IBM Selectric inside to show me where to look for typical problems that often prevent them from working. We found plenty. 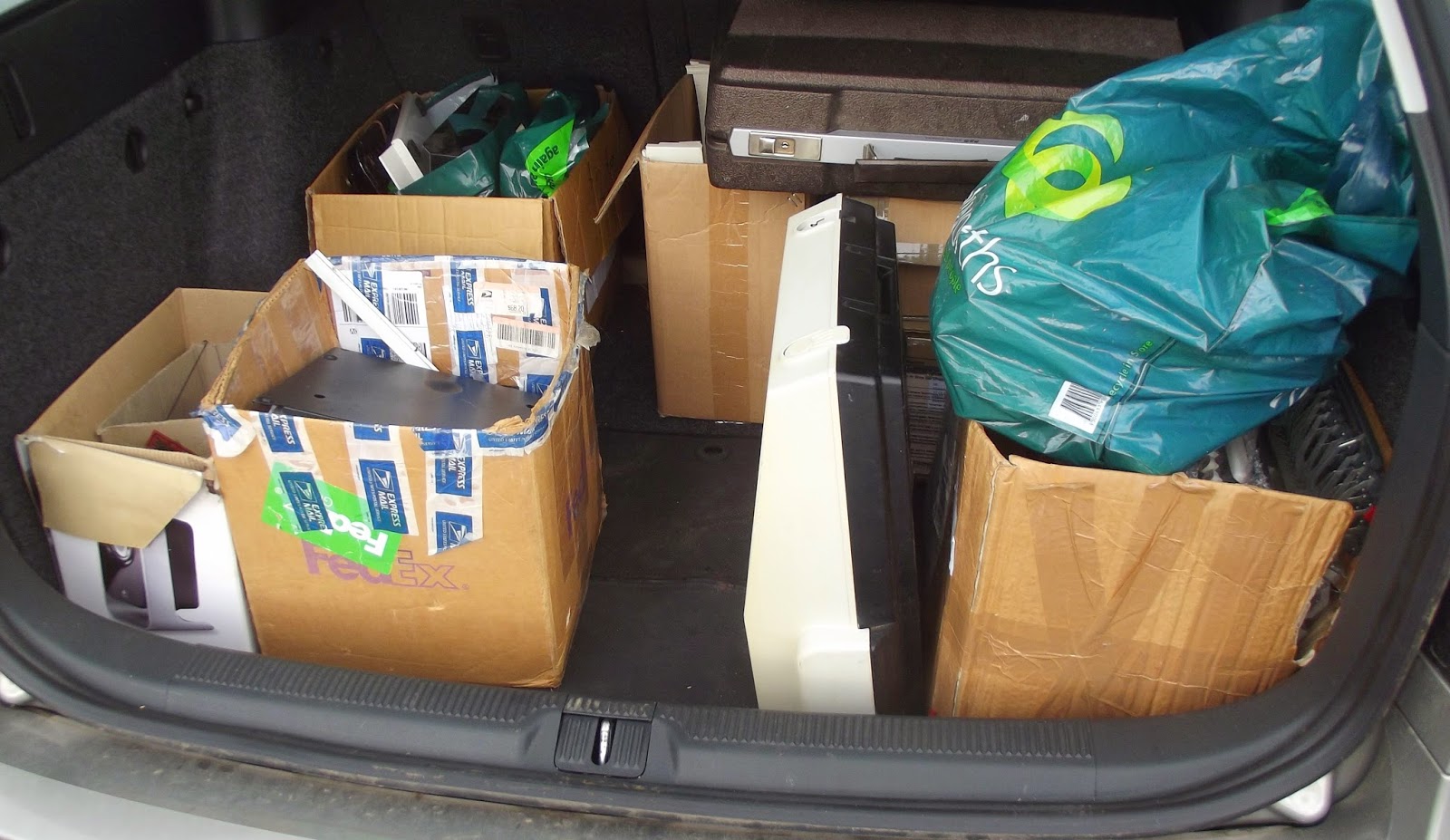 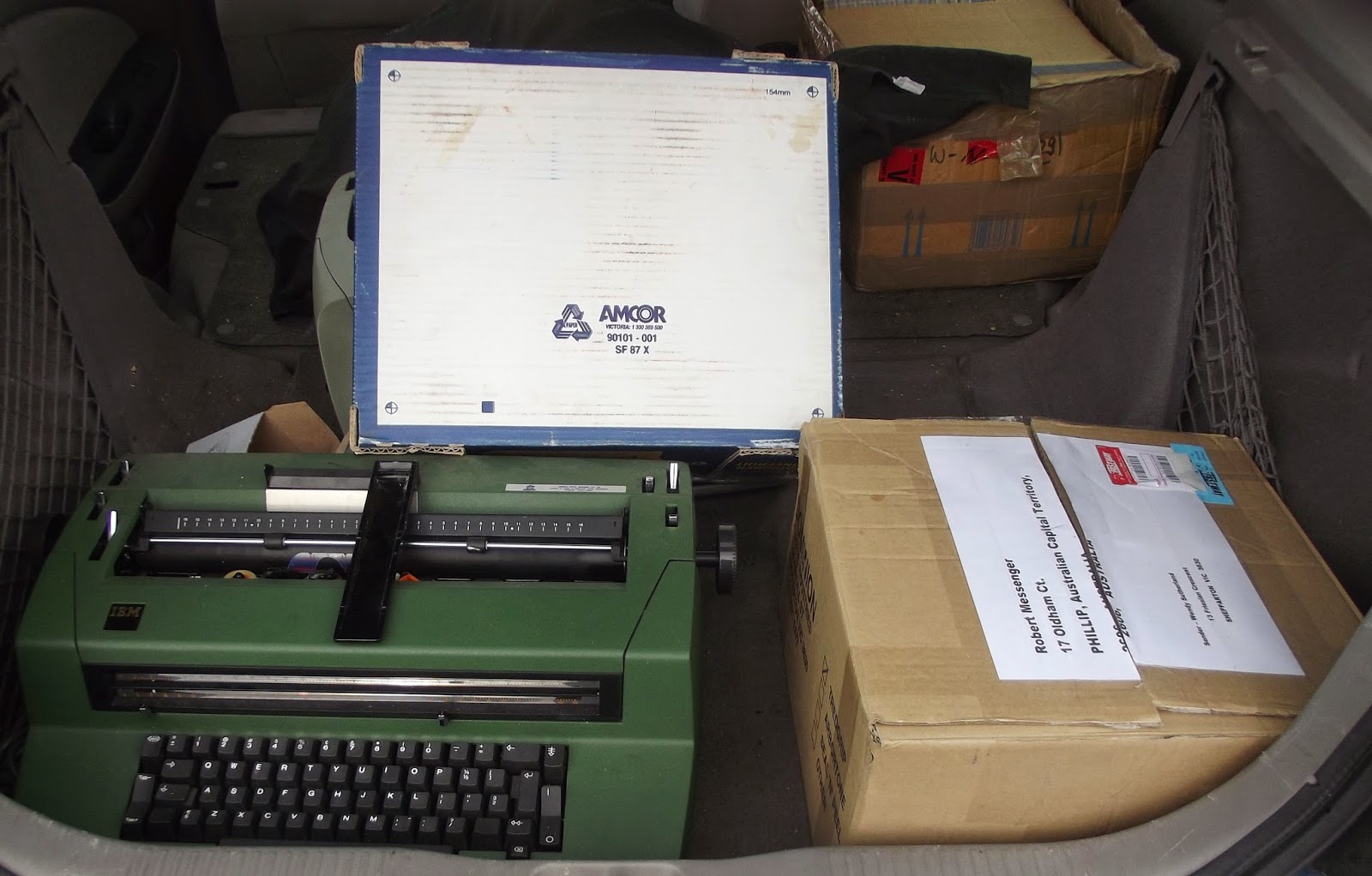 I had planned to drive back to Canberra immediately. But John and Margaret persuaded me to stay overnight in the lovely cottage they had rented for the week, and insisted they shout me a birthday dinner "in a very special pub". In the circumstances, with night falling along with the heavy rain, and me tired from my exhausting trip north, I was delighted to accept their extremely kind offers.
So it was off to the "Lion of Waterloo" pub (after all, the town is called Wellington - get it?). 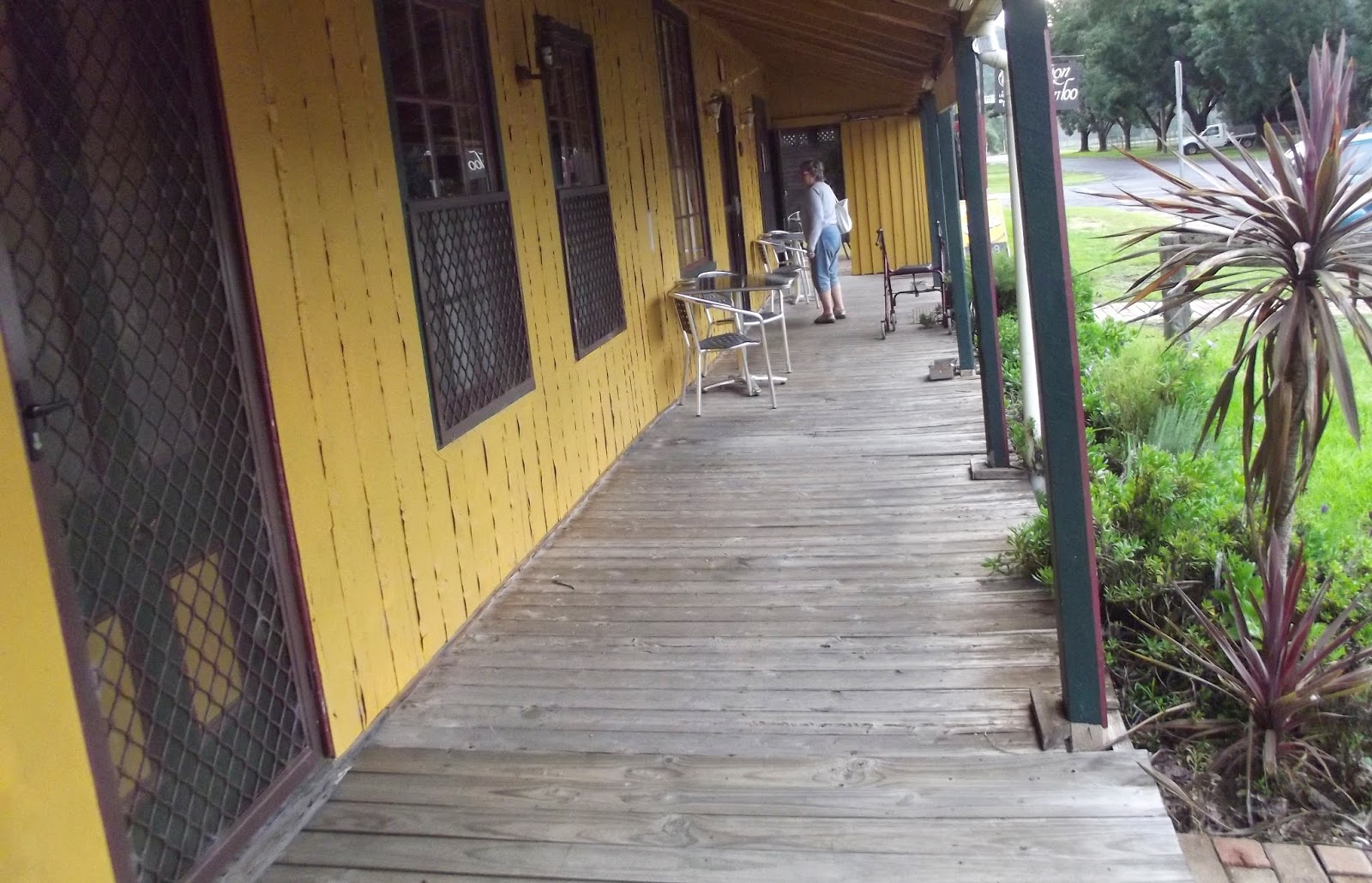 The pub was established in 1842, making it the oldest pub west of the Blue Mountains and one of the oldest surviving pubs in all of Australia. I love a bit of history - especially when it comes to typewriters and pubs. And I knew the evening's conversation would pretty much revolve around both (sorry, Margaret!). 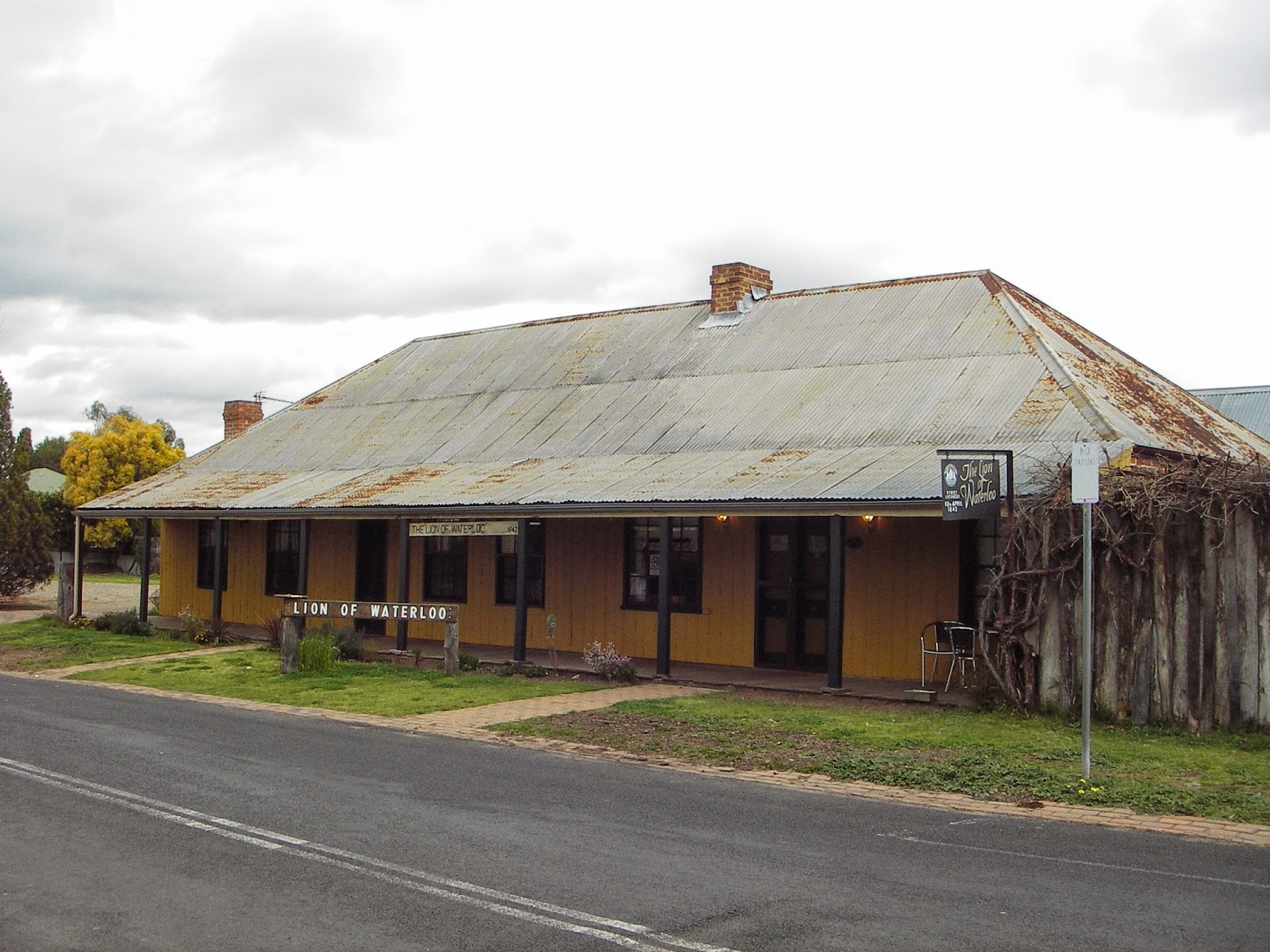 John and I found from making out the wording on the original licence, hung framed on one wall, that the pub was established by the wonderfully named (I also love a fancy name) Nicolas Hyeronimus (1808-1860, below). Hyeronimus was born in Dinant, Namur, Wallonia, in Belgium, close to Waterloo, which is also in Walloon, so there's the connection. Hyeronimus arrived in New South Wales in 1840. He also established the Carriers Arms, the first inn in Dubbo, and by 1859 owned Goonoo Goonoo, a pastoral run of 30,000 acres in Wellington County. That year he was elected to the NSW Legislative Assembly as the inaugural member for the electoral district of Wellington, but he died in Sydney in 1860, after serving just one year in office.

It was outside this pub, in 1854, that the last pistol duel fought in Australia pitted the local coroner, police magistrate and Justice of the Peace (!!!) Dr Samuel Curtis against one Charles Sheridan, allegedly also a local magistrate.
It is said to be the "last recorded duel" in this country, yet it got no publicity at the time it happened, so the powers that be in Wellington back then must have succeeded in keeping it very quite. It was over a woman (Mary, the "Mystical Maiden of Montefiores"), and since Curtis and Sheridan had been drinking heavily in the Lion of Waterloo when their argument broke out, it was all a bit of a farce. Upon firing at one another, they both fell over, missed their targets (each other) and were quickly pounced on by the local constabulary, who pulled them apart and dragged them back into the pub, where they proceeded to toast one another's continuing good health.
Curtis had been an administrator at the Norfolk Island penal settlement and was employed as manager of J.B. Montefiore’s Nanima station in the Wellington Valley from around 1835. Whatever became of Mary, Curtis never married. He died in 1861 in a house in Montefiores Street, Wellington. Sheridan remains a mystery. 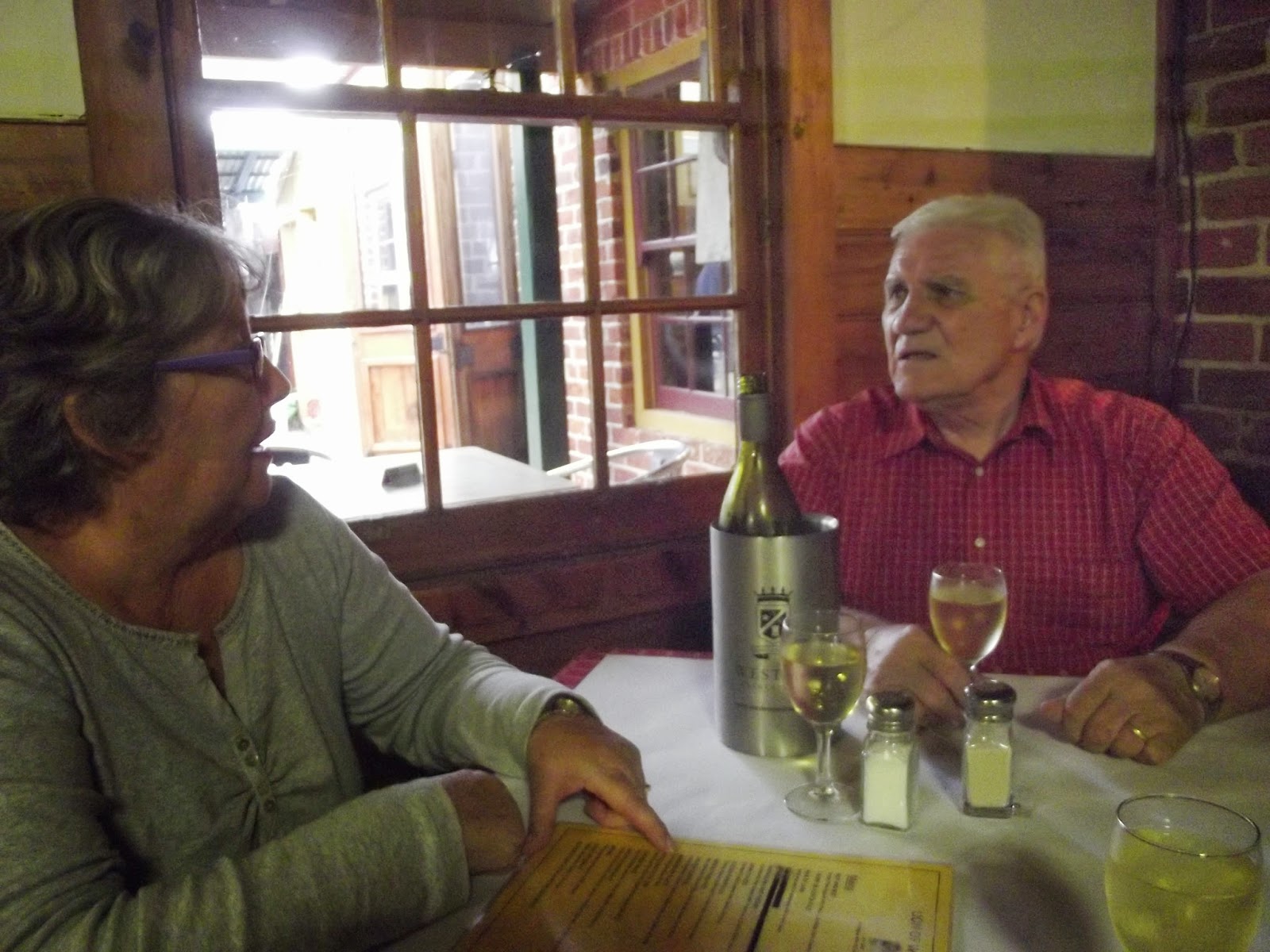 There were no duels at the Lion of Waterloo last night, just general good cheer. John and Margaret soon found that my favourite meal is grilled barramundi washed down with lashings of Australian chardonnay, so that was what they treated me to for my 66th birthday dinner. 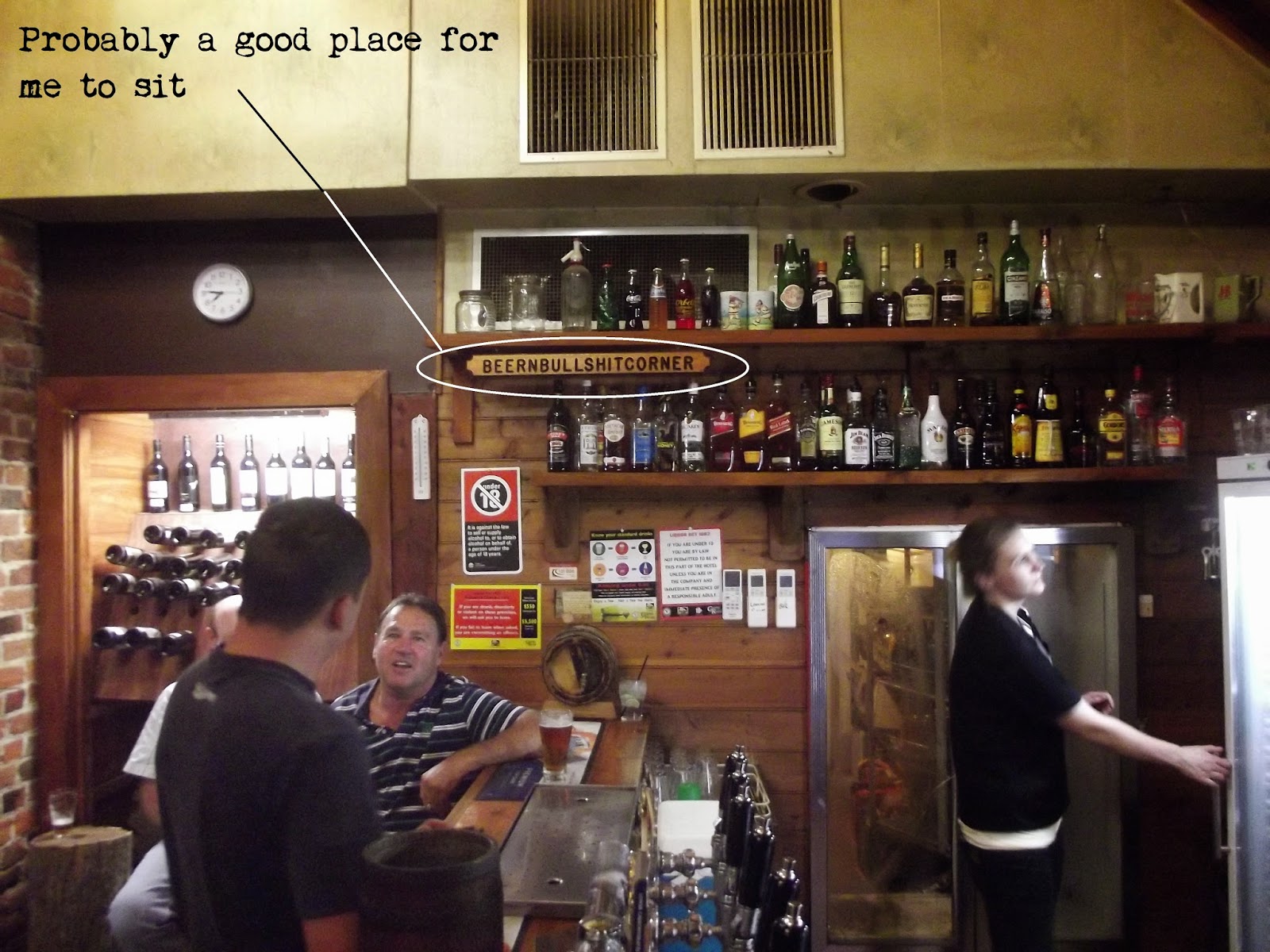 Imagine my delight on hearing that John and Margaret are planning to sell up their Beaudesert home and move to Wellington - they have found a suitable property in Wellington and, all going well, the move will happen in the not-too-distant future. Instead of having this charming couple (and a brilliant typewriter technician) living more than 13 hours away from me, they will be less than four hours away! Oh, joy! Have thy no bounds? 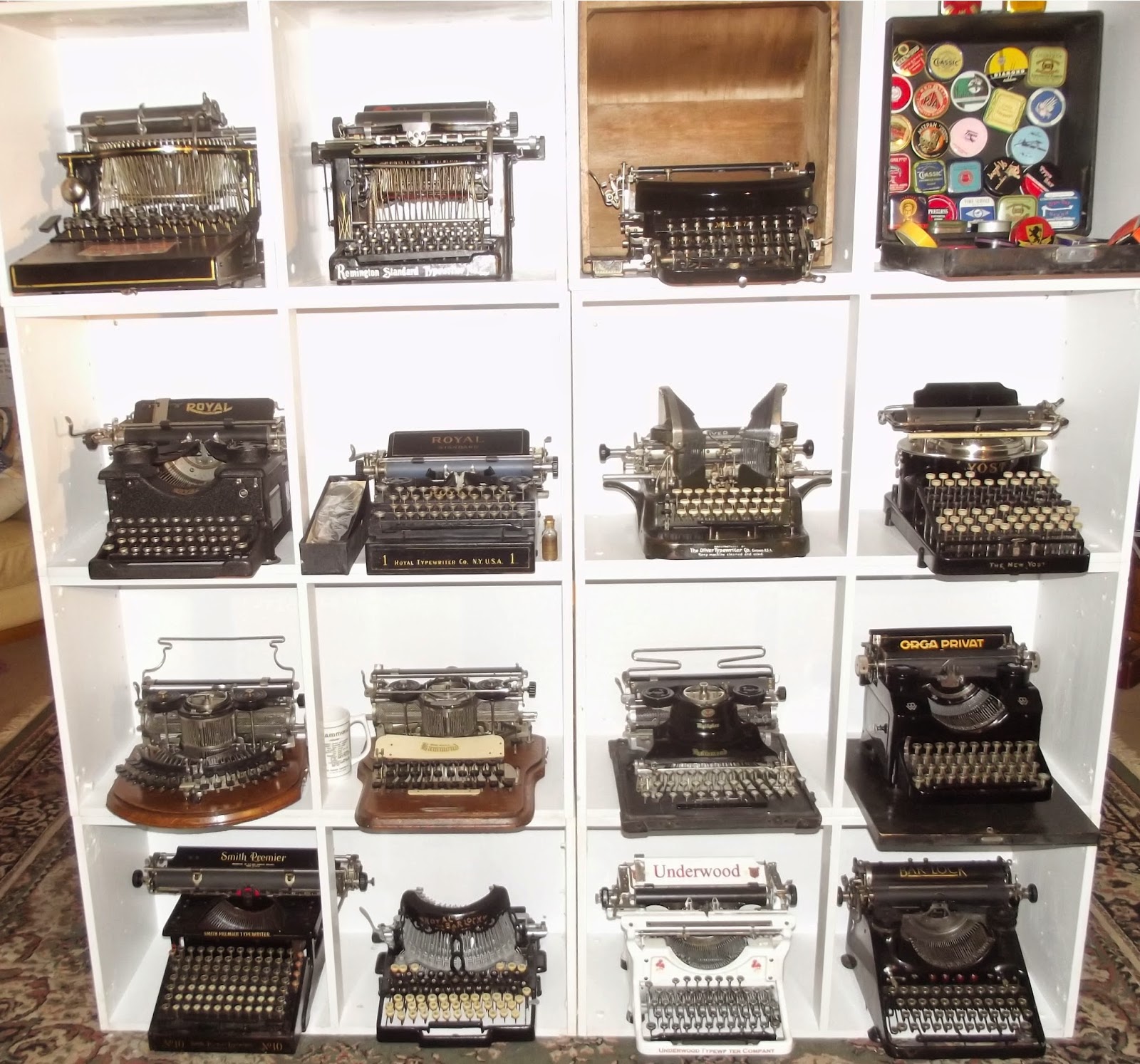 As soon as I got home to Canberra today, I put the Orga Privat and the Hammond Multiplex in my re-arranged standard typewriter display stand. I will be making further changes, adding the Remington Noiseless and Royal KHM given to me last week by Alex McGregor, among other things, but I am obviously going to need more shelving.
My "extended" journey to Wellington was caused by me taking a wrong turn at Yass and finishing up back on the Hume Highway heading for Sydney instead of Cowra. I cut through inland from Gunning, finding myself, with some passing pleasure, to be on Rugby Road, and going through the tiny village of Rugby. In Australia, a "public school" is one open to all students, whereas traditionally a "public school" in England is, of course, a private school. The original, mid-16th Century Rugby School in Rugby town in Warwickshire, England, where the game of Rugby was born in the early 19th Century, looks somewhat different from the one in New South Wales: 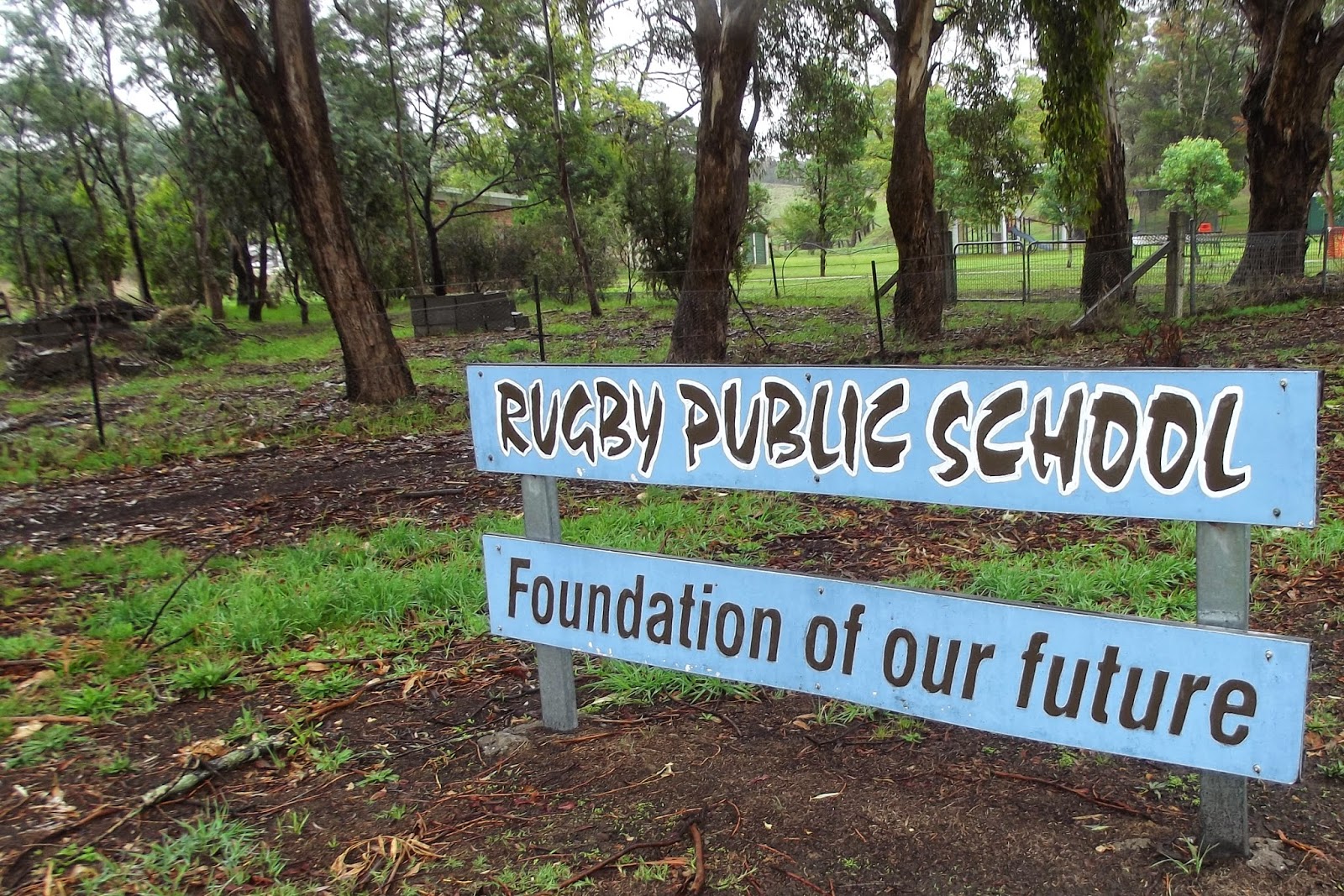 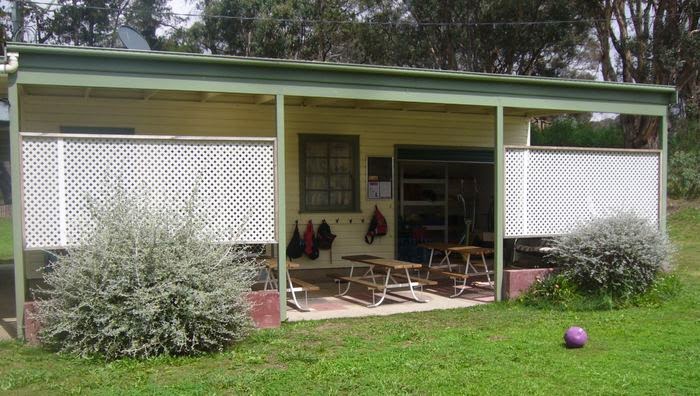 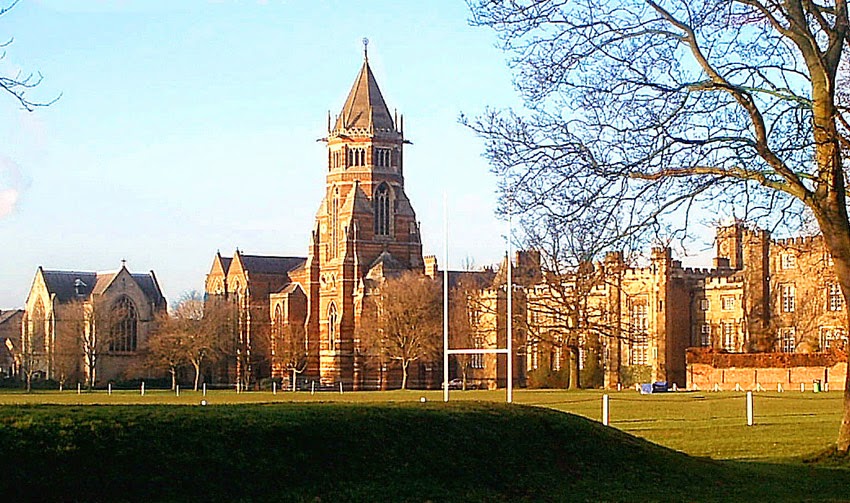 When John and Margaret settle permanently in Wellington later this year, I shall of course be returning there. Another attraction is rugby history. The next time I'm there, I hope to find the ground (it was called Bell Road back then, but thus far I have no idea what it is known as now) where the New Zealand national rugby team, the All Blacks, played in 1932 and again in 1938. The All Blacks have played in towns called Wellington in three countries - anyone able to guess the other two?
In 1932 the All Blacks beat Western NSW Districts 63-15, and in 1938 they won 31-0 in a downpour, even with a Greymouth player (Ron King) in their pack. They got there from Sydney by mail train. One of the local players who faced the All Blacks in 1932 was gifted Wallaby Ronald Regnor Biilmann (1908-1963, of Dutch descent) from Berridale in the Snowy Mountains: 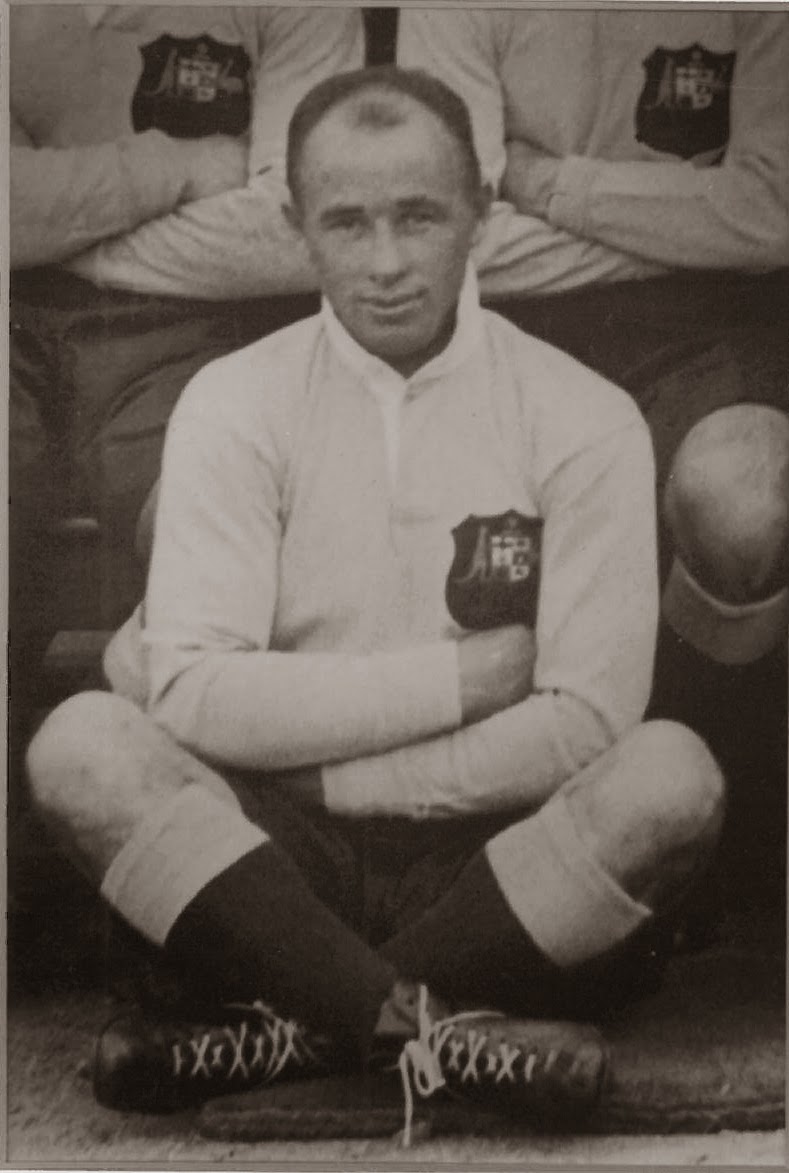 Biilmann grew up in Cooma but attended All Saints College, Bathurst. In cricket he once hit four boundaries from the bowling of the legendary Don Bradman.
TOMORROW: I "Meet a Cheetah".

Posted by Robert Messenger at 21:56

I love the sign. A place reserved for me if I ever get to Australia!

Those are some really beautiful machines.

Happy Birthday Robert - May all your dreams come true!

Happy Birthday, and what a great pair of folks to spend it with! :D

The Orga looks gorgeous and so does the display at large.

Happy Birthday, Robert! That was a very productive trip. The machines are beautiful!

Could you manage to get the Selectric working, too?

You must feel very birthday-y this year! Many happy celebrations. And in good companion too!

Cheetah pictures look amazing. How do they keep them so relaxed?