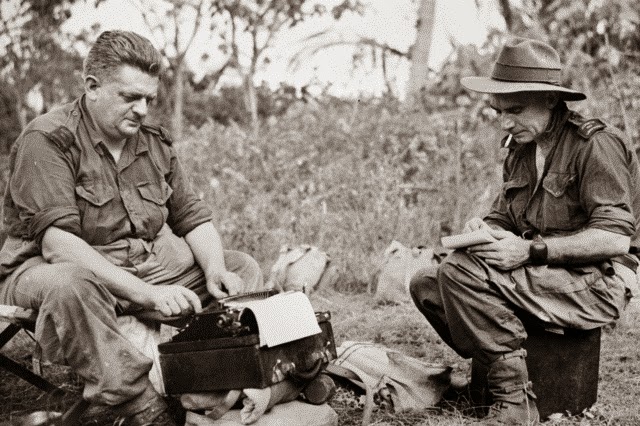 Allan Dawes, left, after the landing on Labuan Island, Borneo, on June 26, 1945. Bill Smith of the Department of Information is on the right.

Allan Wesley Dawes was born on June 22, 1900, at Camberwell, Melbourne, the son of a printer. Having begun his journalistic career at the Melbourne Age in 1918, the "restless genius" later worked for the Argus, the Sydney Sun and the Melbourne Star. When the Star closed in 1936, he joined the Sydney Daily Telegraph. In 1941 Dawes returned to Melbourne as a special writer on the Herald. Best known as a war correspondent, he wrote for the Herald from Darwin and often from "somewhere in New Guinea". He flew in air-raids over Rabaul and Wewak, went north with Americans towards Tambu Bay, and was with the Australian infantry during the advance on Salamaua and the assaults on Lae and Finschhafen. Later he reported from Netherlands New Guinea and Morotai, and saw conditions in Malaya and Java after the Japanese surrendered. Dawes played down conflict between Australian and American troops and propagated Digger [Australian soldier] characteristics that Australians wanted to read about - shop-assistants and stockmen transformed into tough, independent soldiers, "lean and hard and muscular". Moreover, he fostered the Australians' belief in themselves as jungle fighters. His focus on individuals, together with his vital prose, breadth of reference, wit and literary tricks made him an excellent writer for afternoon newspapers. Slender and effervescent when young, Dawes was about 17 stone (108kg) by the time he was 40 - "witty and weighty".  He died at Northcote of cerebral thrombosis on September 7, 1969, aged 69.

War correspondents, American author Irwin Shaw, left, and Alan Moorehead.
Alan McCrae Moorehead was born on July 22, 1910, at Canterbury, Melbourne, the son of journalist Richard James Moorehead. He joined the staff of the Melbourne Herald in 1933. Reporting taught him to write rapidly and arrestingly, on demand. He sailed to England in 1936. In 1937, working as a stringer for the Daily Express in Gibraltar, he reported the Spanish Civil War and Mediterranean tensions. Leaving Rome for Athens before Italy entered World War II, Moorehead befriended Alex Clifford of the rival Daily Mail. Clifford became his mentor. They conspired to be sent to Cairo as accredited war correspondents covering the new Mediterranean front. Moorehead's editor saw no signs of brilliance in his work until the war in North Africa galvanised his prose into a dramatic and poetic style combining a sharp, bird’s eye view of campaigns and battles with empathetic and detailed observation of fighting men and their commanders. He was twice mentioned in despatches for his courage under enemy fire and was soon widely acknowledged as the pre-eminent British war correspondent. For almost three years he followed the fortunes of the British Army in North Africa, working under enormous pressure. In 1944-45 Moorehead followed the British Army’s assault on Italy and Germany from the Allied landings to the heart of darkness at Belsen. Whereas the gentlemen’s desert war had excited him, the war in Europe disgusted him. 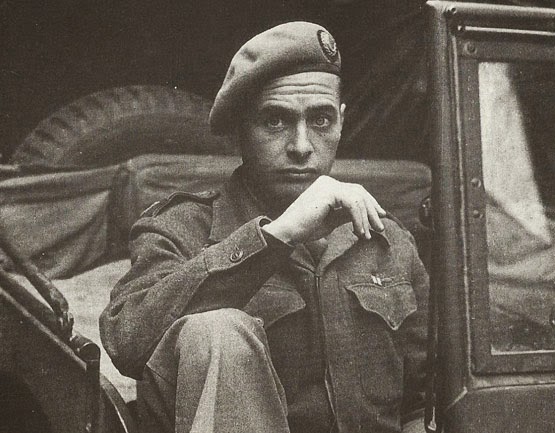 Moorehead first made his name as a historian with a study of the 1915 Mediterranean campaign to force the Dardanelles and take the Gallipoli peninsula. This was an unlikely subject for him. Although two uncles had served at Gallipoli, the dreary solemnity of Anzac Day had been "a torture" to him as a schoolboy. Gallipoli has rarely been out of print and has been credited with sparking the revival of World War I studies. Moorehead now had the finance to complete his most ambitious project, a history of the European penetration of Africa and the clash between Christendom and Islam. In 1956 he had conducted fieldwork for a series of New Yorker articles on the fate of southern Africa’s wildlife at the hands of tourists hunting big game. He brought these together as the episodic and passionate No Room in the Ark (1957), which charmed reviewers. The White Nile (1960) was a sensation, selling 60,000 hardback copies in its first year. A prequel, The Blue Nile (1962), taking the story back to Napoleon’s invasion of Egypt, was almost as successful. Moorehead’s virtual invention of the modern travel-adventure history book now placed him in the front rank of popular writers. A debilitating stroke in December 1966 left him unable to utter or write a complete sentence, even after intense rehabilitation. He died on September 29, 1983, at his home in Camden, London, aged 73, A good journalist, he became a great war correspondent and an outstanding narrative historian, perhaps Australia’s finest. Certainly no Australian writer before him had commanded so large an international audience. 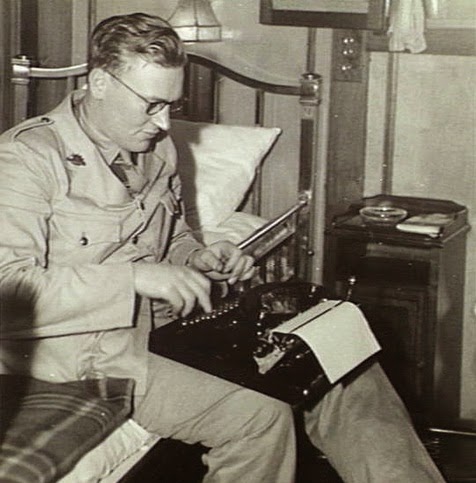 Jack Hetherington, January 1940
Jack Aikman Hetherington was born on October 3, 1907, at Sandringham, Melbourne. Jack left school at 16 to join the Evening Sun as a copy-taker. His first short story was published in the Australasian in 1925, the year in which he moved to the Herald & Weekly Times Ltd as a journalist; by 1934 he was writing a daily column and editing the Sun News-Pictorial's Saturday magazine. Next year he worked his passage to England. Based in London, he survived by writing stories about the Australian outback for popular magazines, and by working as a sub-editor and wire-service reporter. En route back to Australia, he spent six months in the United States with Australian Associated Press. Late in 1938 Hetherington returned to Melbourne and the Herald. In January 1940 he was assigned as a war correspondent and sailed with the Australian Imperial Force's first convoy for the Middle East. He covered the battles of Bardia and Tobruk (January 1941), and witnessed the enemy's surrender at Benghazi (February). His reports were published in newspapers in Australia, by The Times of London and the Manchester Guardian, and by The New York Times and the North American Newspaper Alliance. In March 1941 Hetherington accompanied the Australian 6th Division on the abortive expedition to Greece. Early in 1944 the Herald sent Hetherington to cover the allied invasion of Western Europe. He landed in Normandy on the evening of D-Day, June 6. He had built a reputation as "one of the outstanding correspondents of the war". Profoundly respectful of ordinary people caught up in conflict, he wrote in 1956 that "the courage of the unheroic is the most sublime courage of all". In 1945-49 Hetherington was editor-in-chief of the Adelaide News. Unhappy as an administrator, he returned to the Melbourne Herald as a feature-writer. In 1952 he joined the Argus as deputy-editor. Two years later he went to The Age to write the "Collins Street Calling" column. He died on  September 17, 1974, at Parkville, aged 66. 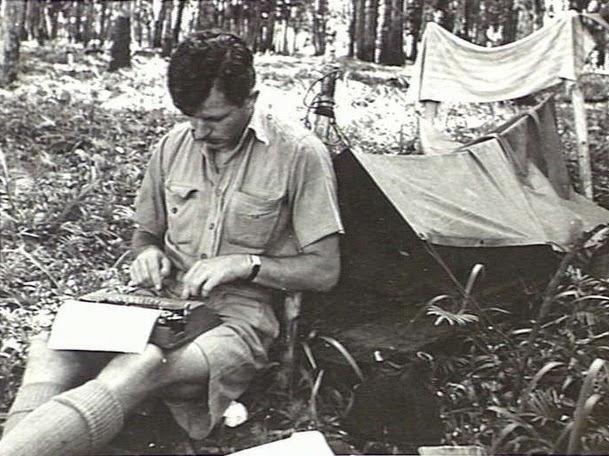 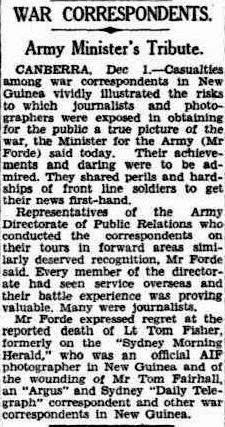 Thomas James Fairhall was born on November 19, 1912, in Raymond Terrrace, New South Wales. After early days as a reporter with several local newspapers, such as in Port Kembla, Fairhall became editor of the Illawarra Evening Star, and then joined the Sydney Daily Telegraph, working as sub-editor, roundsman and war correspondent in South-East Asia. He was wounded in New Guinea during a Japanese bombing raid in 1942 and was commended by General Douglas MacArthur for his "long and meritorious service". After the war, Fairhall worked with the Sydney Daily Mirror and The Sydney Morning Herald, from which he retired in 1978. He died on April 27, 1990, at Bellevue Hill, New South Wales, aged 77. 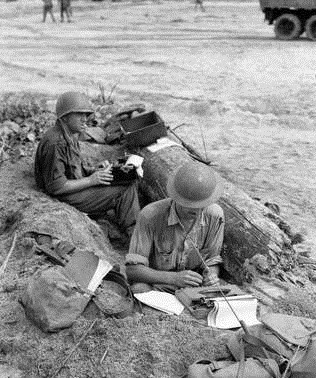 Gordon Holland working in a trench on Noemfoor Island in Dutch New Guinea on July 23, 1944, following the Allied landing.
Percival Gordon Holland was born in Kalgoorlie, Western Australia, on February 15, 1913, but grew up in Bendigo, Victoria, where he became a cadet on the Bendigo Advertiser. He joined the editorial staff of The Age in Melbourne in 1935. After World War II began, he enlisted in the AIF as a private. Later selected for an officer training scheme, he graduated as a lieutenant in the infantry in 1943. He was posted to force headquarters in New Guinea as adjutant of the army's public relations unit at Port Moresby. When the commander of Australian forces, Field Marshal Sir Thomas Blamey, made it known that he wanted war correspondents with a military service background to report on operations in the South-West Pacific, The Age and The Sydney Morning Herald nominated Holland as a war correspondent. He was discharged from the army in May 1944 and returned to Papua New Guinea the following week as Australian war correspondent No 78. Holland also became an accredited war correspondent at General Douglas MacArthur's general headquarters. In 1945, Holland received a letter from MacArthur awarding him the Australian-Pacific Service Ribbon, with a note that read: "You have added luster to the difficult, dangerous and arduous profession of war correspondent." Back at The Age after the war, Holland covered state politics before becoming chief of staff in the 1950s. An assiduous and trustworthy journalist, his period with The Age spanned 24 years. He died at a Box Hill, Melbourne, nursing home, aged 96, on May 18, 2009.

George Henry Johnston was born on July 20, 1912, at Caulfield, Melbourne. At the age of 16 he had an article on local shipwrecks accepted by the Argus. In 1933 he was taken on to that paper as a cadet reporter, with responsibility for the shipping round. In 1941 Johnston was accredited No 1 Australian war correspondent. He worked in New Guinea (1942), Britain and the United States (1943), India, China and Burma (1944), Italy (1944) and in Burma once more (1945); he also witnessed the Japanese surrender on board USS Missouri in Tokyo Bay in 1945. Johnston returned in October 1945 to find himself famous and favoured, especially by the Argus's managing director (Sir) Errol Knox who nicknamed him "golden boy" and appointed him first editor of the Australasian Post. Early in 1948 Johnston was given a feature-writing role on the Sydney Sun. In 1951 Johnston was appointed to head the London office of Associated Newspapers Services. In November 1954 he resigned from newspaper work and moved with his family to the Greek islands, first to Kálimnos, and a year later to Hydra. He died of pulmonary tuberculosis on July 22, 1970, at his Mosman, Sydney, home, aged just 58. 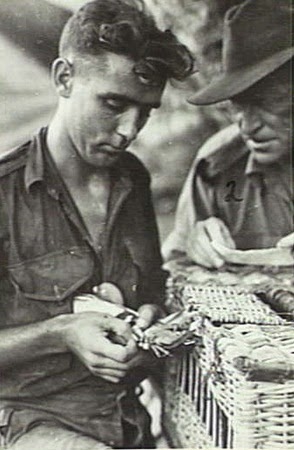 This is how typewritten war stories were sent from places such as the Tsimba area of Bougainville Island in February 1945. A signaller attaches copy from war correspondent Frank Aldridge to the leg of a unit carrier pigeon. Aldridge's story did reach Australian newspapers incredibly quickly: 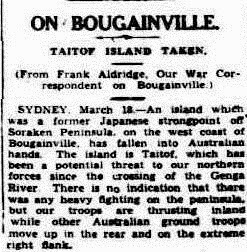 Posted by Robert Messenger at 13:09

These are great, Rob! 8'm rally enjoying them.

Thank you Scott, TG someone's reading them! I'd hate to think I was wasting my time!

As ever, you are finding fantastic photos and information.