£5 for a Monarch! The Sales War of Australian Typewriter Traders

On May 22, 1936, the Australian Government introduced drastic measures designed to correct Australia's adverse trade balance with foreign countries, including the United States. The US was described as a "poor customer" and an "indifferent buyer" of Australian goods. (In fairness to the US, there wasn't a lot to buy. Australia had little or no industry apart from agriculture.)
The importation of fully assembled US-made typewriters into Australia was reduced by 75 per cent, effective immediately. A total ban on US vehicle chassis was also introduced. Because of these set figures, typewriters and chassis were excluded from a licensing system, adopted to limit imports of other items. Licences for these items were refused unless they became a national necessity, or where employment in Australia was involved.
Thus it was still possible to import US-made typewriter parts, to be assembled in Australia by Australian labour. However, the restrictions meant it was only feasible to import parts for portable typewriters. 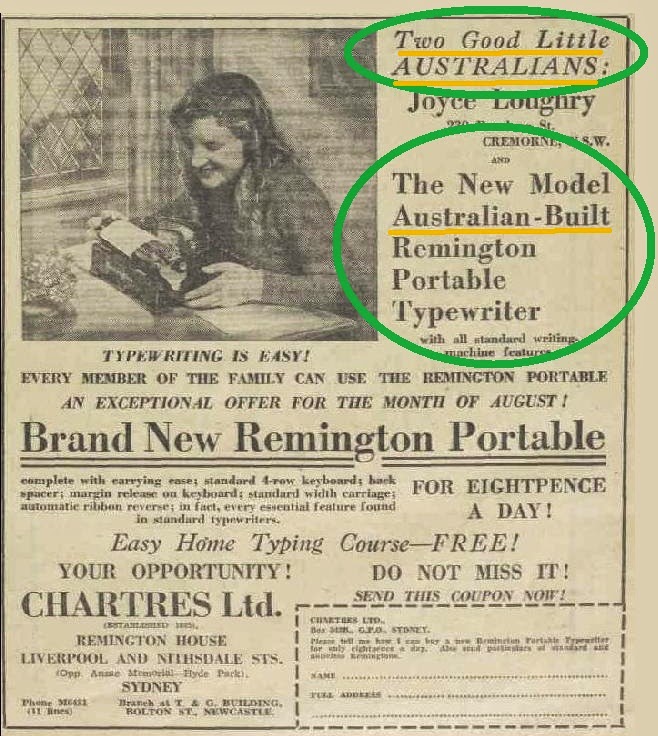 During 1934-35, the total value of Australian imports, including typewriters, had been a crippling £17.3 million. The Government firmly stated "The object of [the restrictions] is not to permit any of these goods to come into Australia from the United States and other non-buyers of Australian goods."
As far as typewriter sales in Australia were concerned, the immediate consequence for this country's two leading dealers, Chartres and Stott, was the necessity to appeal across the country for second-hand machines to "rebuild" or "recondition". The writing was on the wall for them: the severe import restrictions would mean the supply of new typewriters would fall way short of demand. And in order to survive, Chartres and Stott had to keep selling typewriters. To add to their woes, the Ottawa Conference in 1932 had doubled the import duty on new typewriters from 10 per cent to 20 per cent.
Chartres was the Remington agent, Stott was in partnership with Underwood. But it suddenly didn't matter which brands they bought or accepted as trade-ins on generous terms. They just needed typewriters, any typewriters, to rebuild.
And so it was that in mid-1936, a second-hand standard typewriter sales war broke out. The prices were ridiculous. 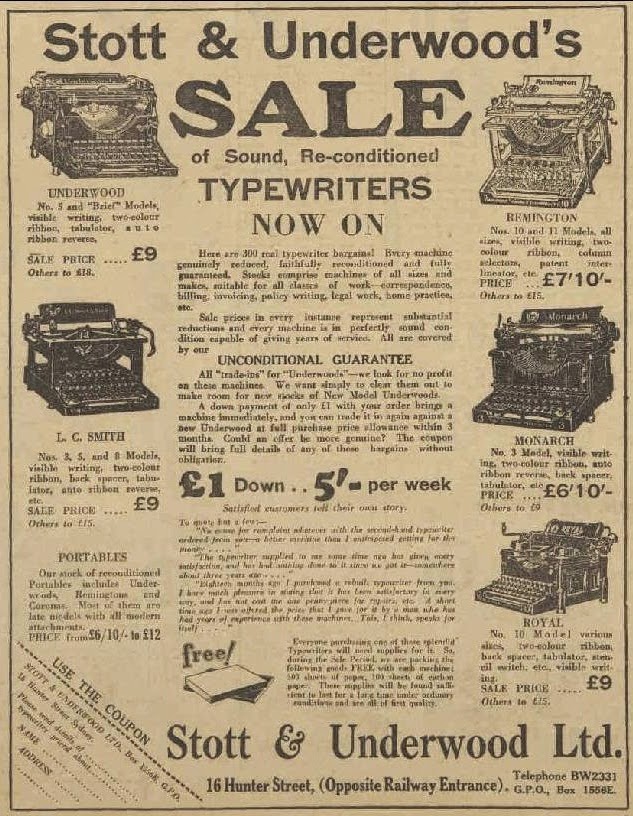 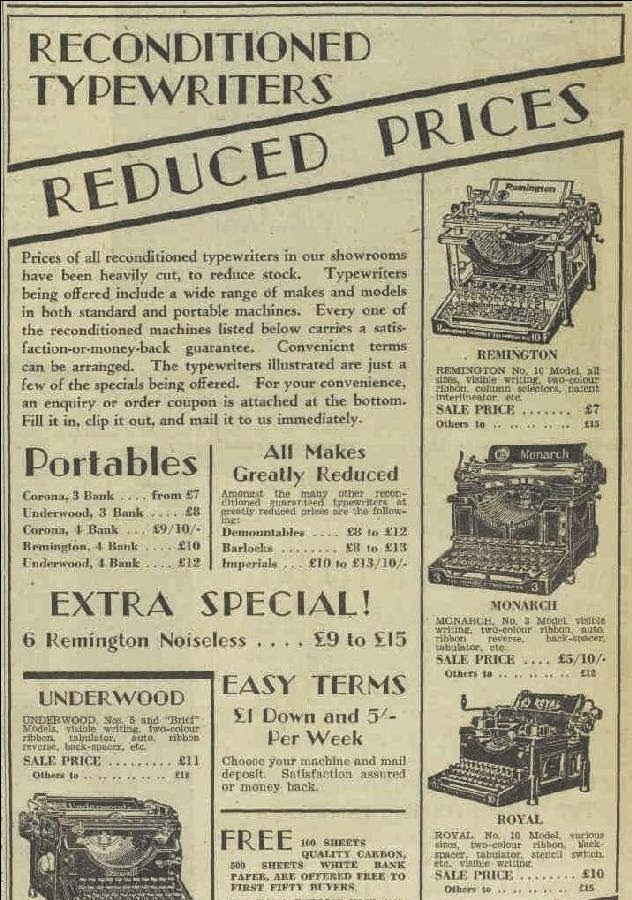 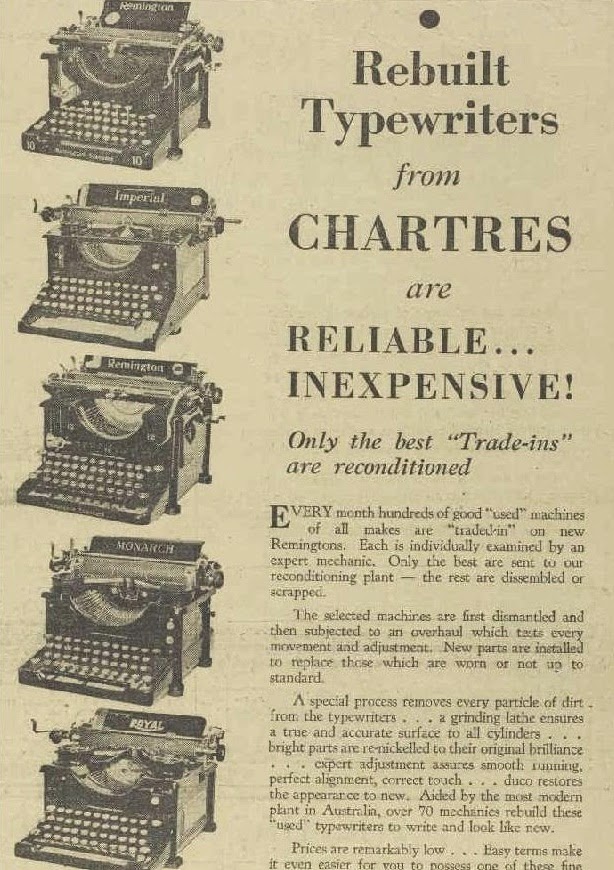 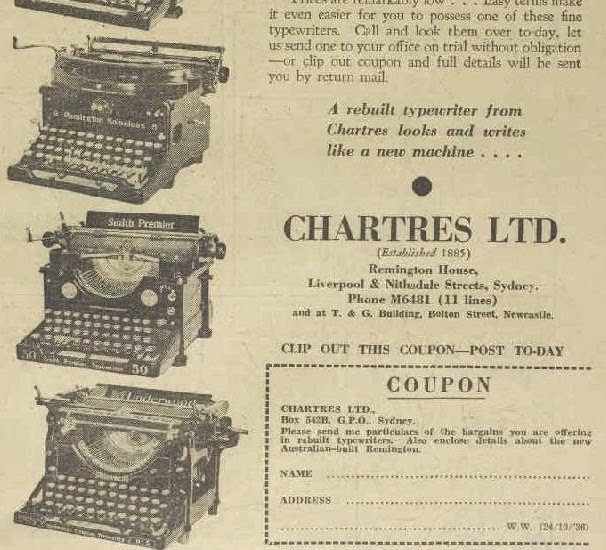 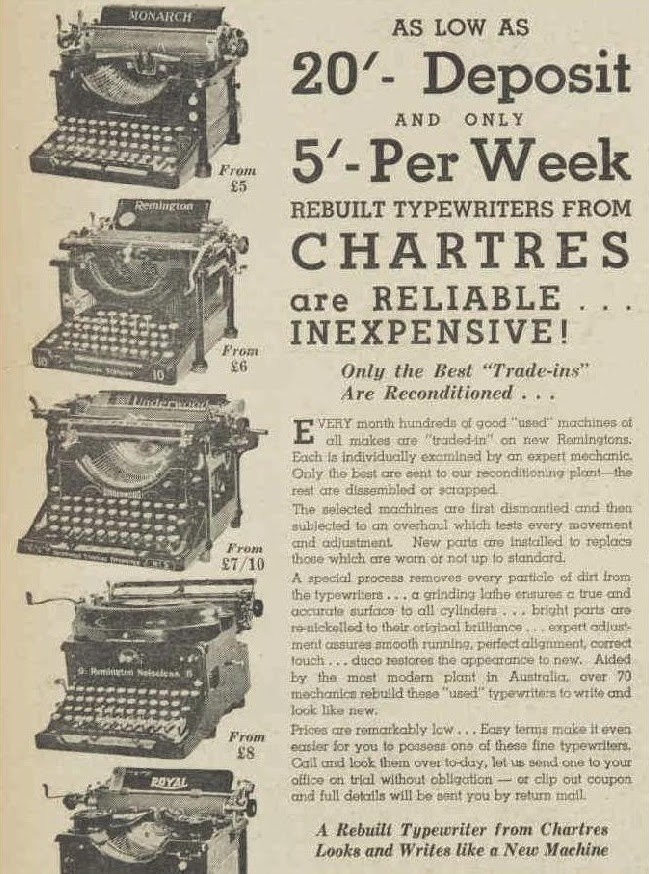 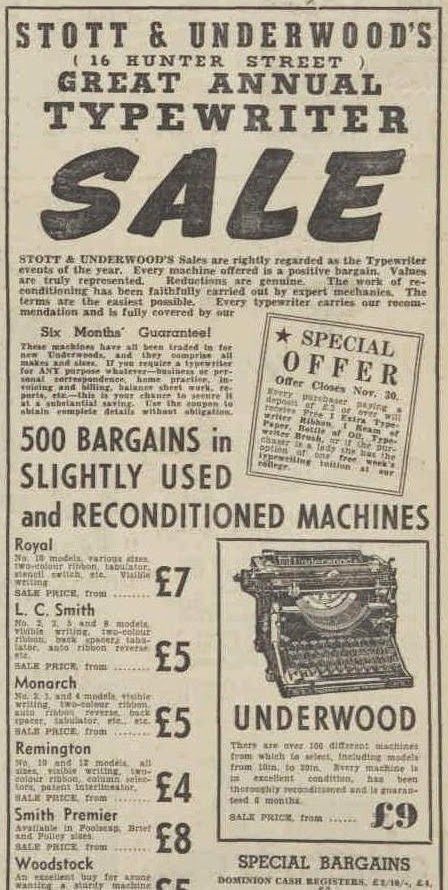 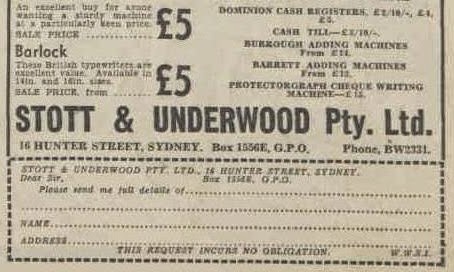 The Australian typewriter sales war lasted four years, and then a real war broke out. And during the World War II years, the only typewriter-related display advertisement which appeared in Australian publications (repeatedly from 1940-45) was this one: 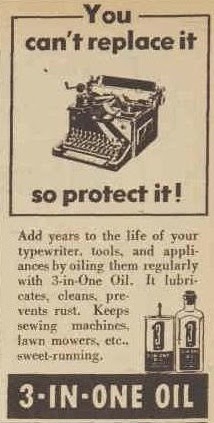 Yes, that's right, Australians could not replace typewriters with new ones!
Posted by Robert Messenger at 00:31

I have always used 3-in-One oil on typewriters--it is a truly incredible product! I had no idea that it was available in Australia.

Those really were bargain-basement prices!

Oh, if we could only find fine machines like those at the same prices today!