House of the Falling Typewriter 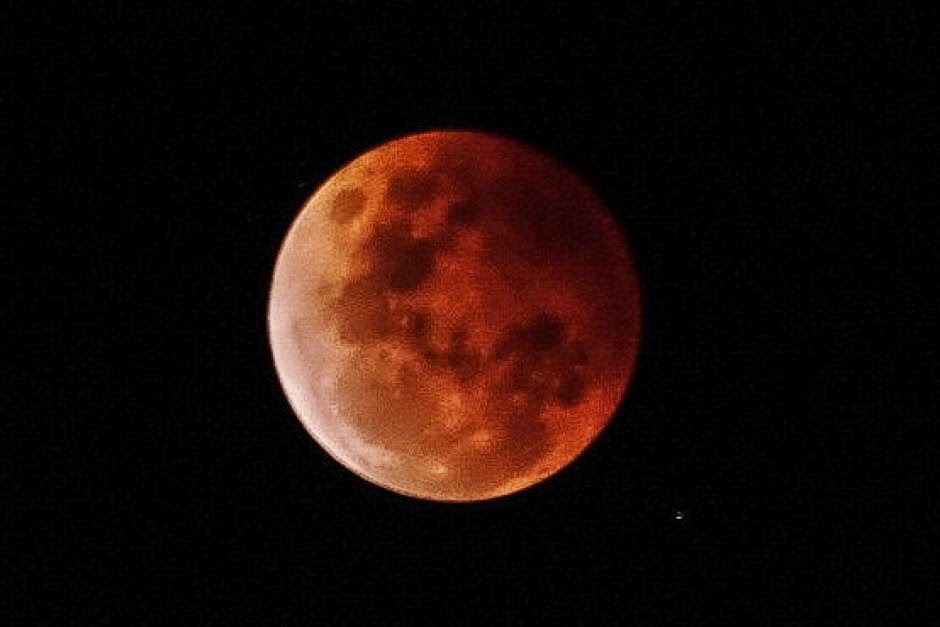 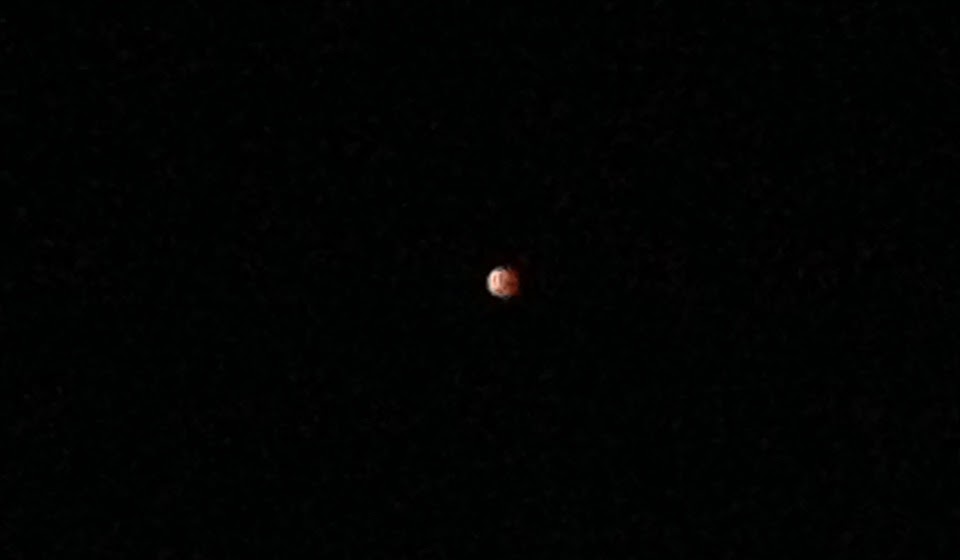 The view of the Canberra night sky from my front porch
On Wednesday evening we had a "Blood Moon" over Canberra. According to the Book of Joel, a "blood moon" is an omen of the coming of the end times - "the sun will turn into darkness, and the moon into blood, before the great and terrible day of the Lord comes".
Lord knows where that idea comes from. For me it was a good omen, a sign of better times.
And sure enough, the next day this house literally bled typewriters. Not that I said "bloody good riddance!" to any of them.
There are now just 287 left between these four walls (and three ceilings), down by 200 from a mere two months ago. By Christmas it'll be much closer to 200 than 300 left.
That's not counting 16 waiting in the departure lounge, marked for urgent attention. But it is including 87 which, prophecies aside, will remain here, hopefully for a very long time to come. It also includes quite a few which, I'm afraid to say, are destined for an undignified "Blood Moon" end - things like blood-coloured Monptis, anaemic Underwood 16s and Antares Compacts and purple Nakajimas. Ugh! 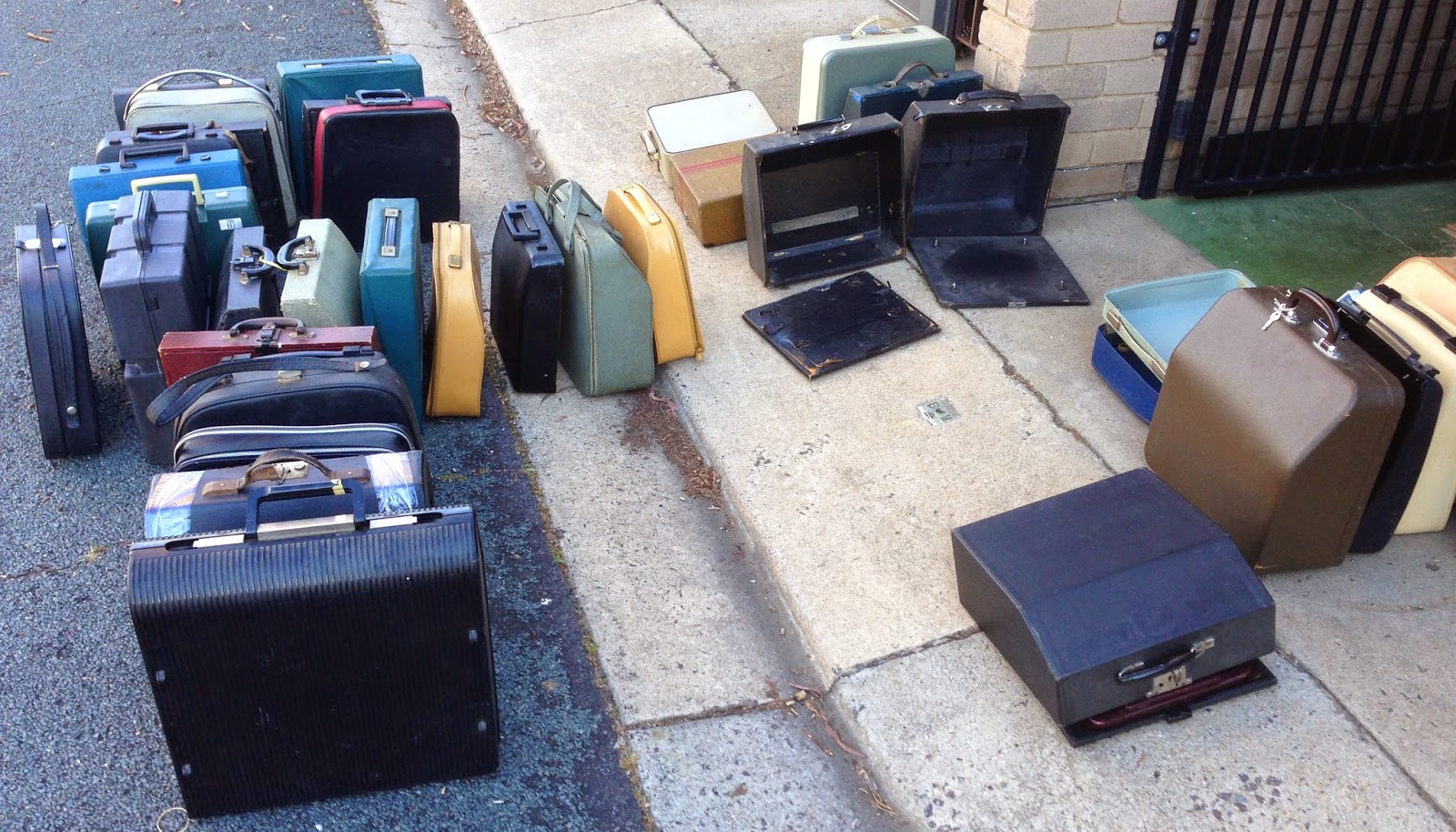 "Out my front door"

No fewer than 53 departed Swinger Hill in one load on Thursday evening, including three Adler Model 7 thrust-action behemoths, a magnificent duo tone red Remington Model 2 portable, a pink-and-grey Galah Olympia SM7 (see the cover of Paul Auster's typewriter book, artwork by Sam Messer), a black-and-gold Royal Eldorado in near to new condition, a mustard Montana Luxe with bright blood red keytops, a lovely congealed blood burgundy Groma Model N and an Olivetti Studio 42 and Olympia SM1 in crinkle black.
Although this house had already hemorrhaged about 145 typewriters in the past month or so, it wasn't until after Thursday's raid that I really began to become aware of loads of empty spaces, in the lounge and in the upstairs rooms. Until Thursday, gaps that had appeared had been quickly filled and the absences went unnoticed. That made this downsizing process just a little less painful.
I am particularly thrilled that my collection of Depression Era and other cut-price 1930s typewriters has stayed intact and remains in Australia, and has now been put on display in the Canberra home of Ray and Alice Nickson. Ray and Alice already had a Remington 3B and want to complete a set of at least 10. I may even be prepared to part with my last Rem-Blick. The Nicksons have added these six, seen below before they left here, to a Bantam and a Monarch Pioneer, both with some blood red keytops (like the Rem 3B): 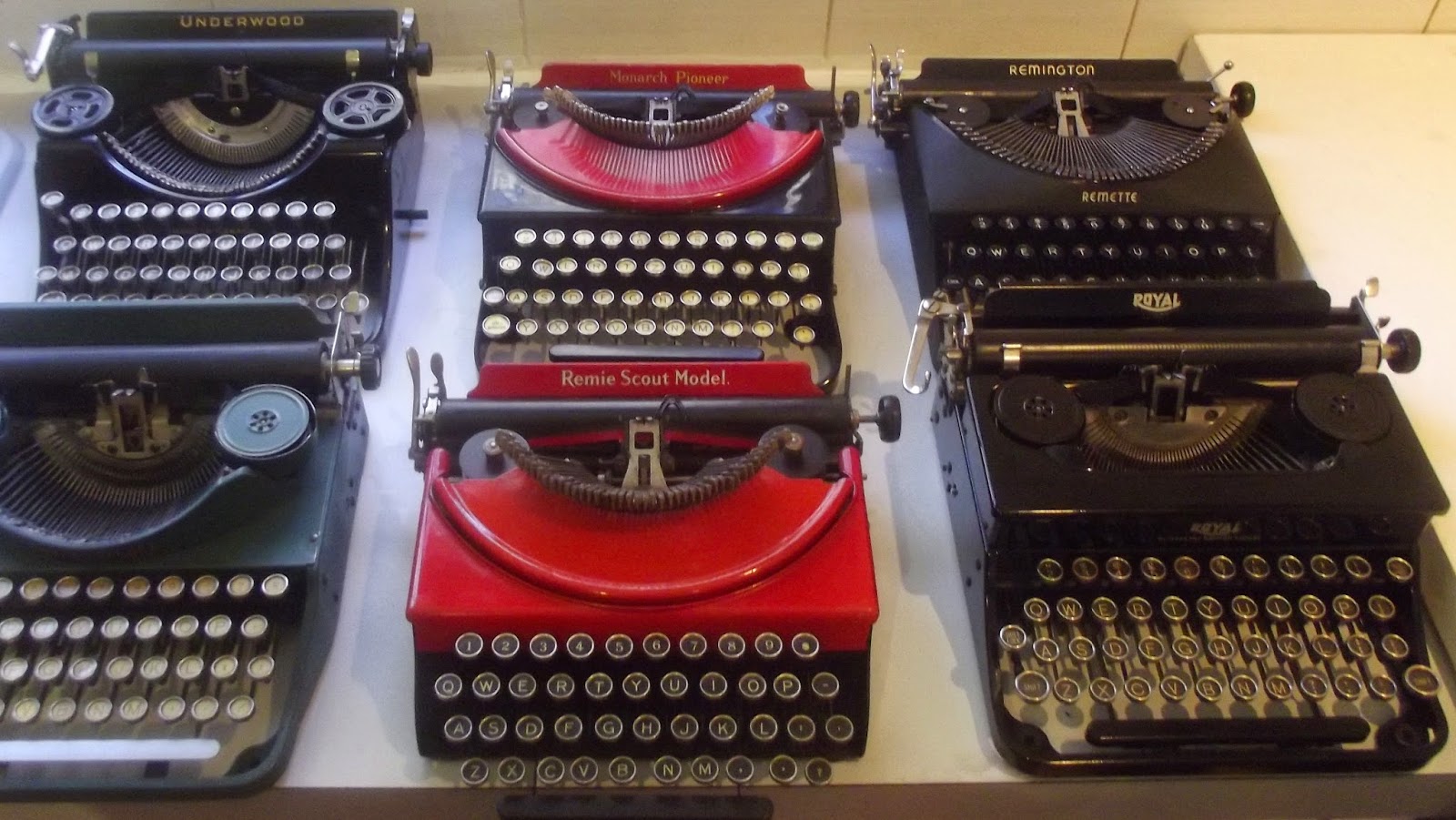 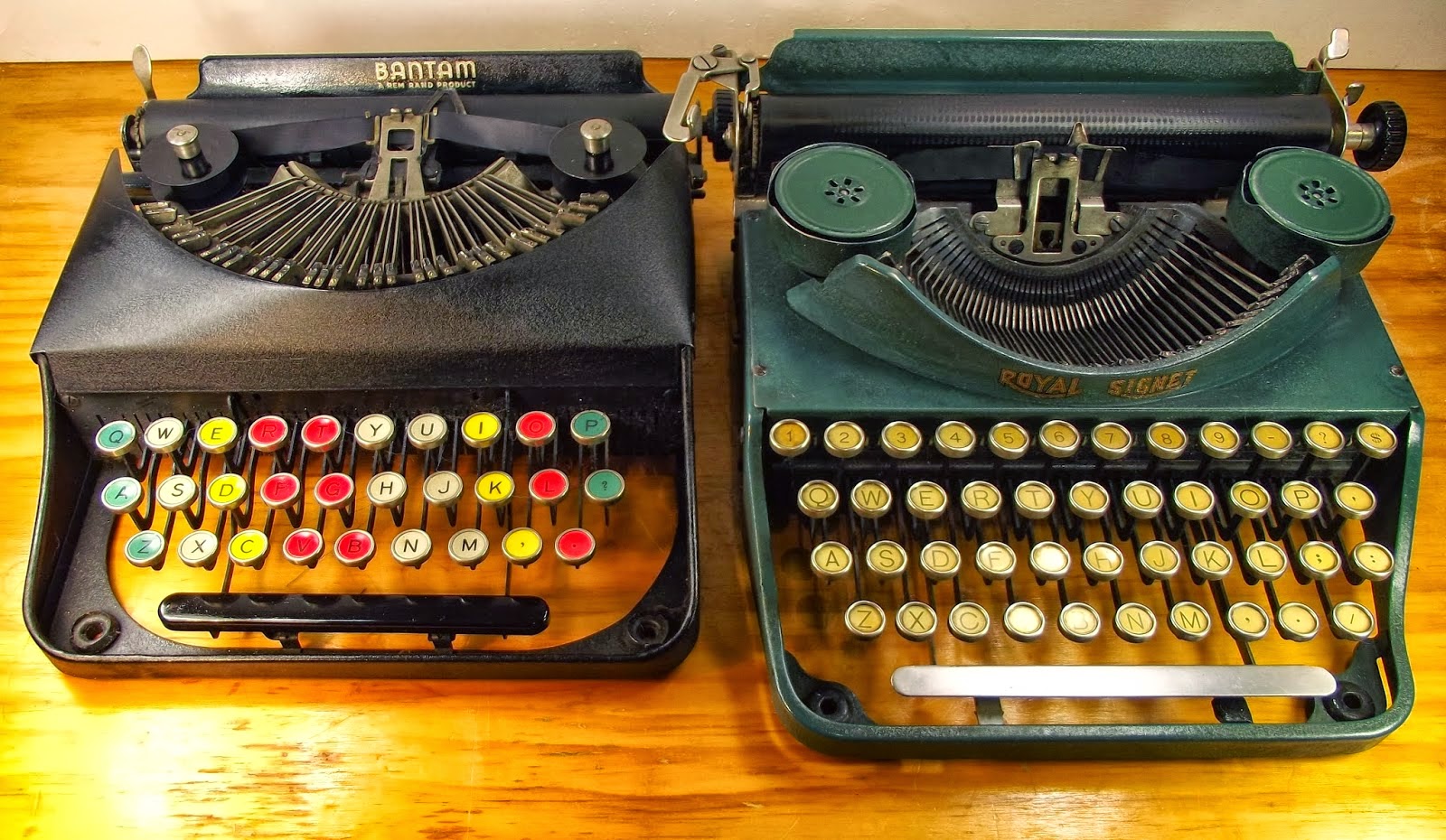 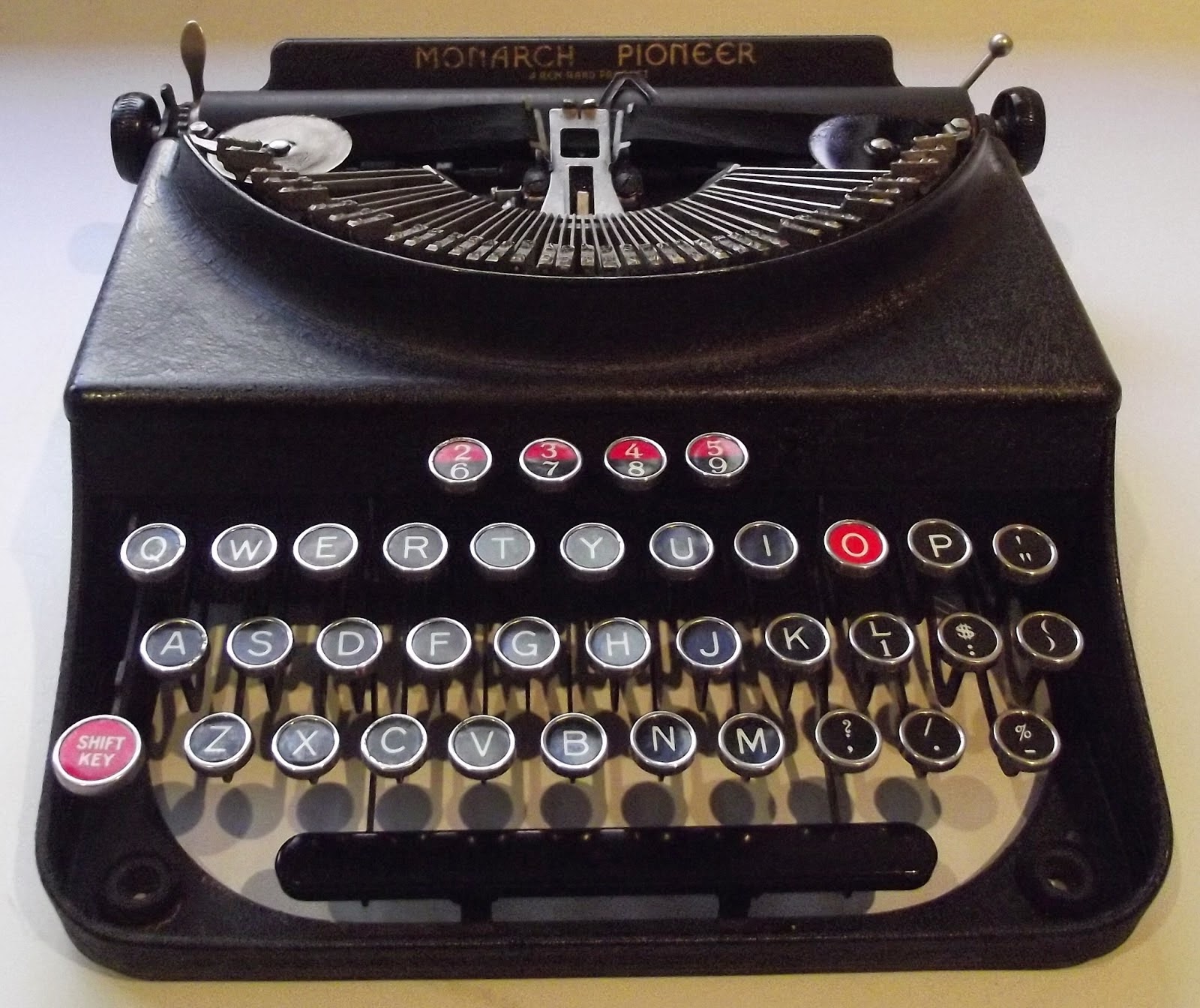 The one being at this address not feeling any perceivable pain is Charlie the Typewriter Guard Cat. At the start of the downsizing, Charlie took immediate delight in vacated shelf spots. Not so much because he had fewer typewriters to guard, but because he had new places to hide. 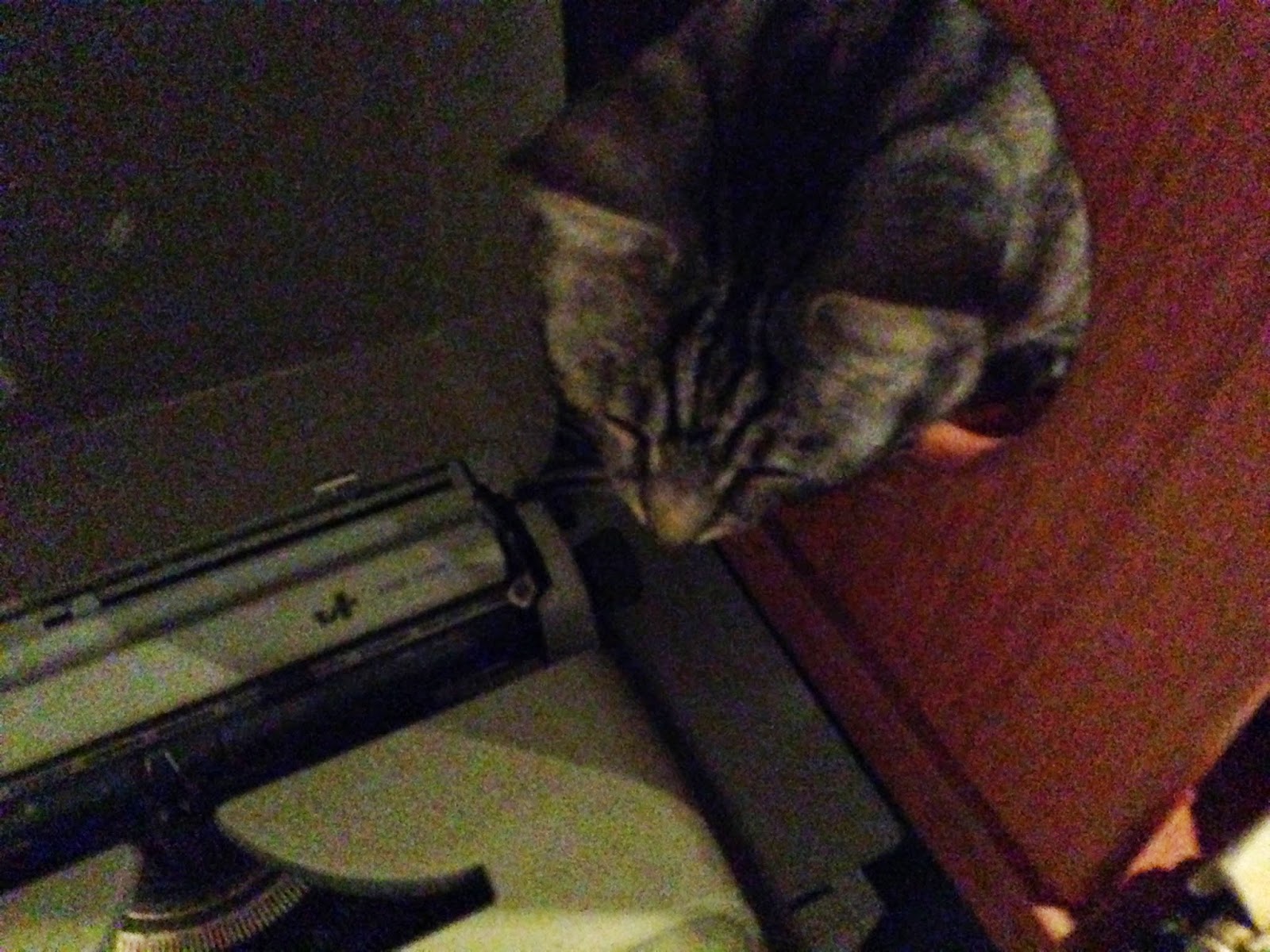 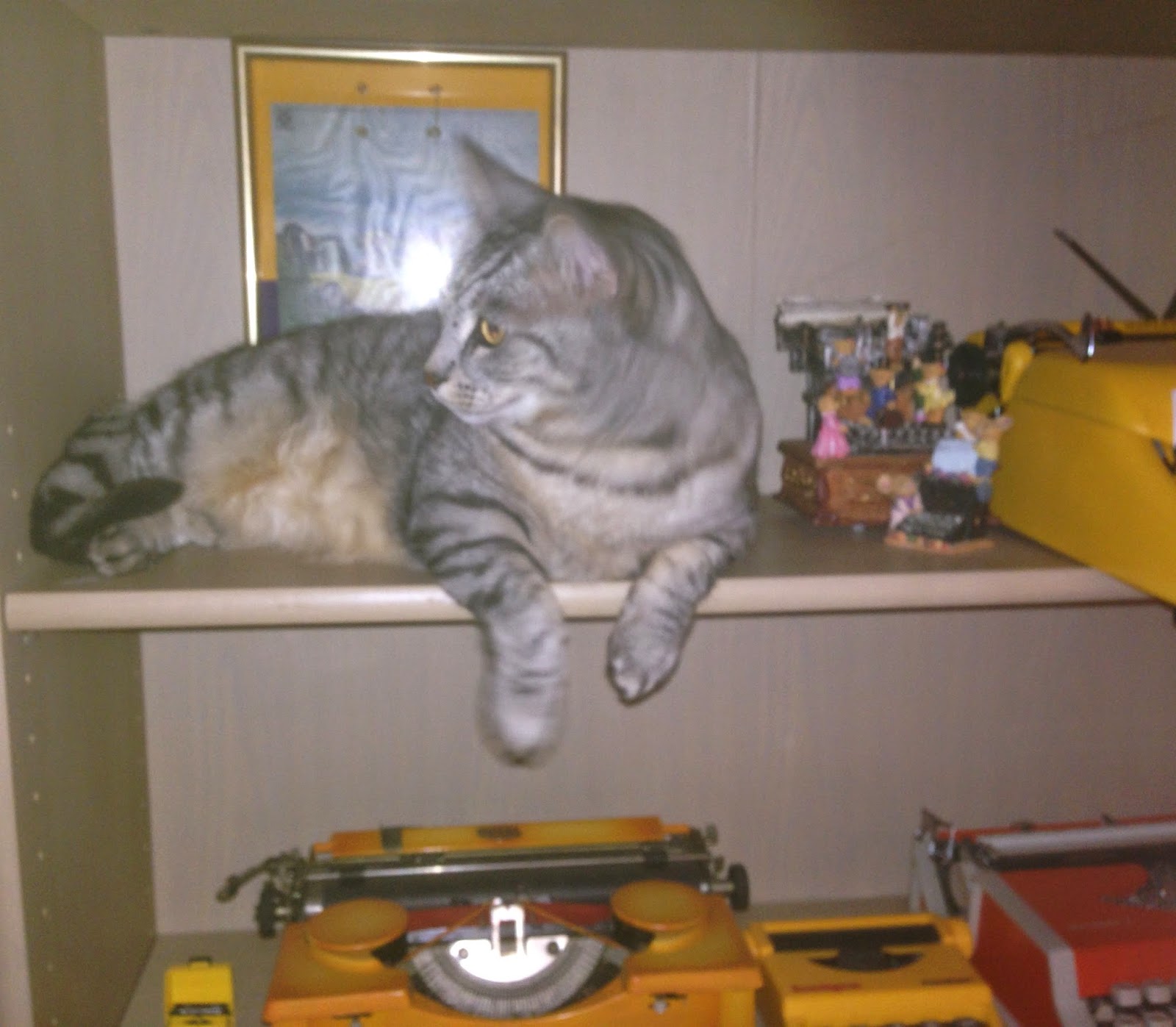 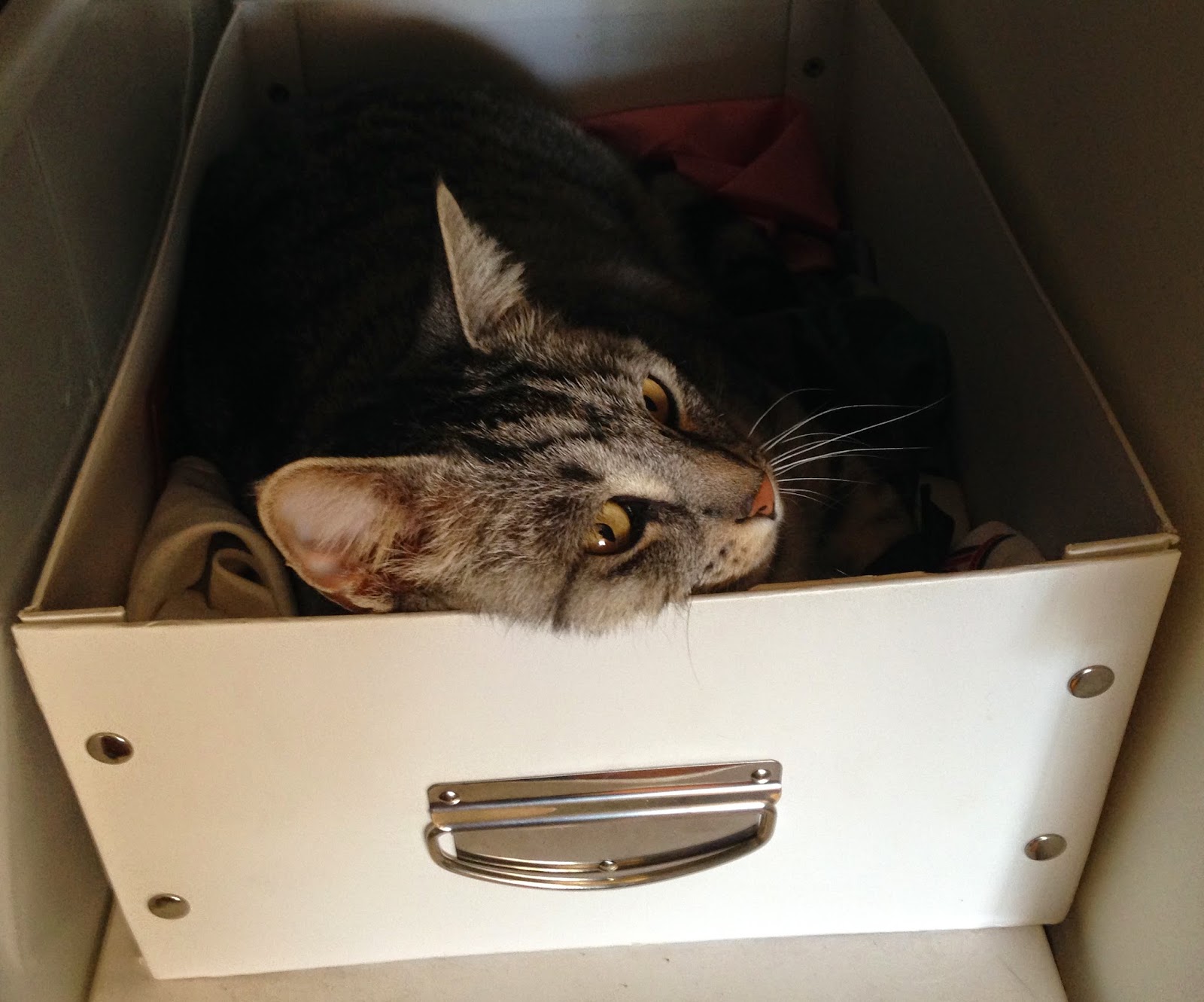 Contrary to the "Blood Moon prophecy", the sun here last week turned to a bright gold, not darkness, and Charlie was able to squeeze past typewriters and get outside to enjoy a roll in the grass I laid for him before the onset of winter.

OK, now for more serious matters. As much I too would like to be rolling about in the grass on sunny days, visits here to collect large loads of typewriters, up to 57 at a time, have meant this house, and most especially the shed downstairs full of typewriter cases, has been turned upside down five or six times. It's been time-consuming and disruptive, and with my fragile state of health, a huge drain on my very limited stores of energy. But while exhausting, this has been, admittedly, well worth it financially. 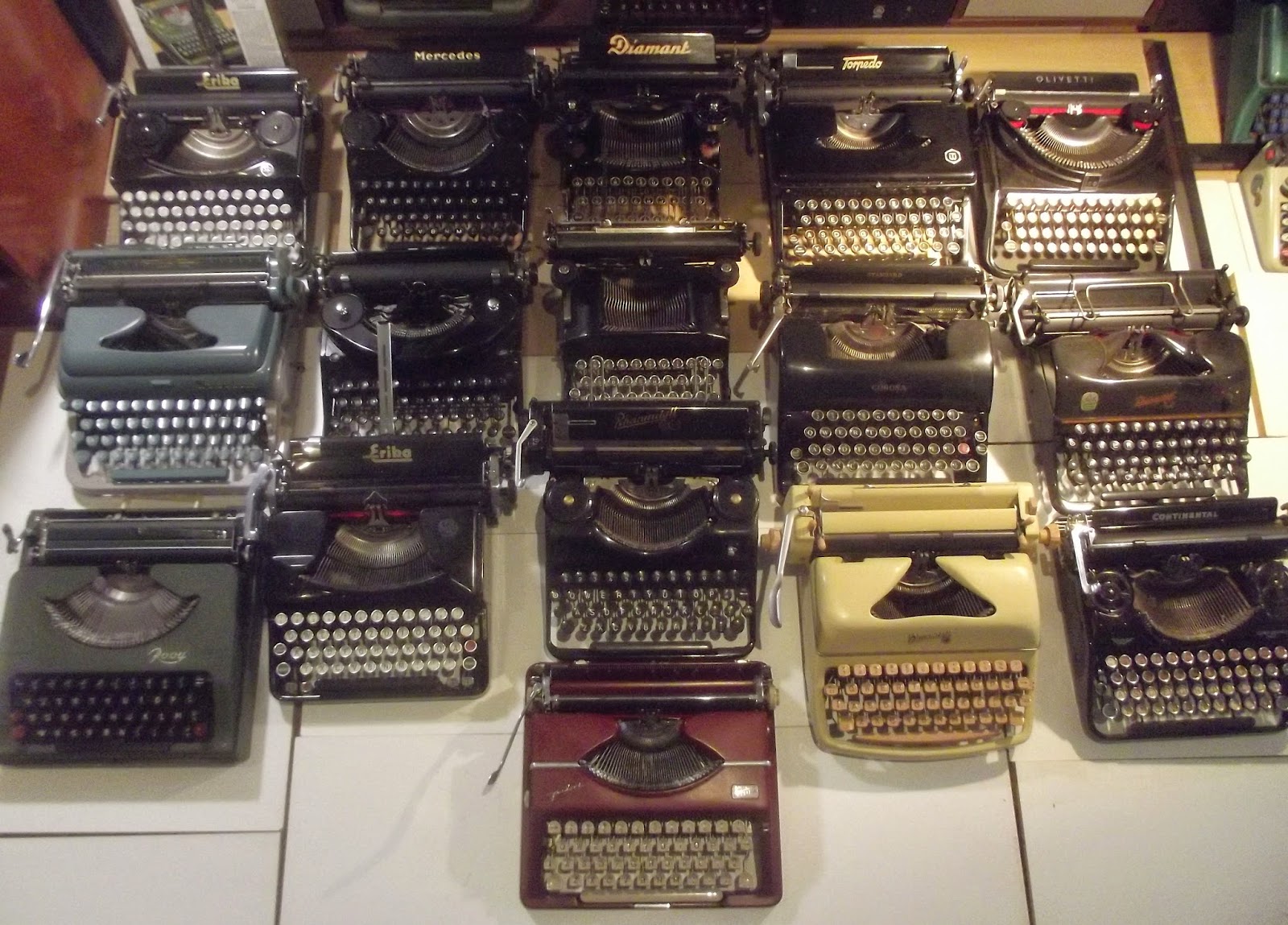 In an effort to make access to the cases easier, I dumped dozens of large cardboard boxes, which I'd been keeping, thinking one day I'd use them to pack typewriters for shipping. Now I have to match cases to typewriters and find boxes for the 16 machines which I urgently need to post (seen above).
On top of all this, I've restored typewriters for friends, serviced others, have had people come by to buy typewriters, and have made preparations for my No 3 son's wedding in three weeks' time. We celebrated his 26th birthday last week.
So, yes, I have neglected some things, and those 16 typewriters are very much at the top of that list. If any of the six people who had decided to buy those typewriters have grown tired of waiting for me to deliver and now want to pull out of the deal, I would fully understand and accept their decision. I'm sorry, and I don't want to give the impression that I'm making excuses. It's just that I've simply been overwhelmed by all these typewriter sales, that's all there is to it. And I am getting to the 16 as quickly as I can. 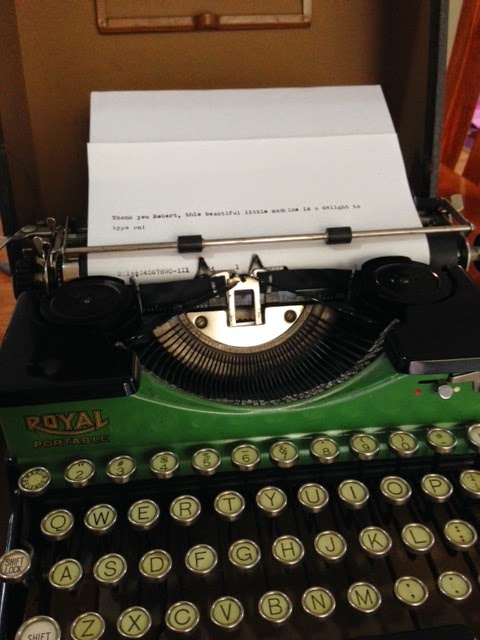 At least I have succeeded in satisfying three "customers" in the past month or so! 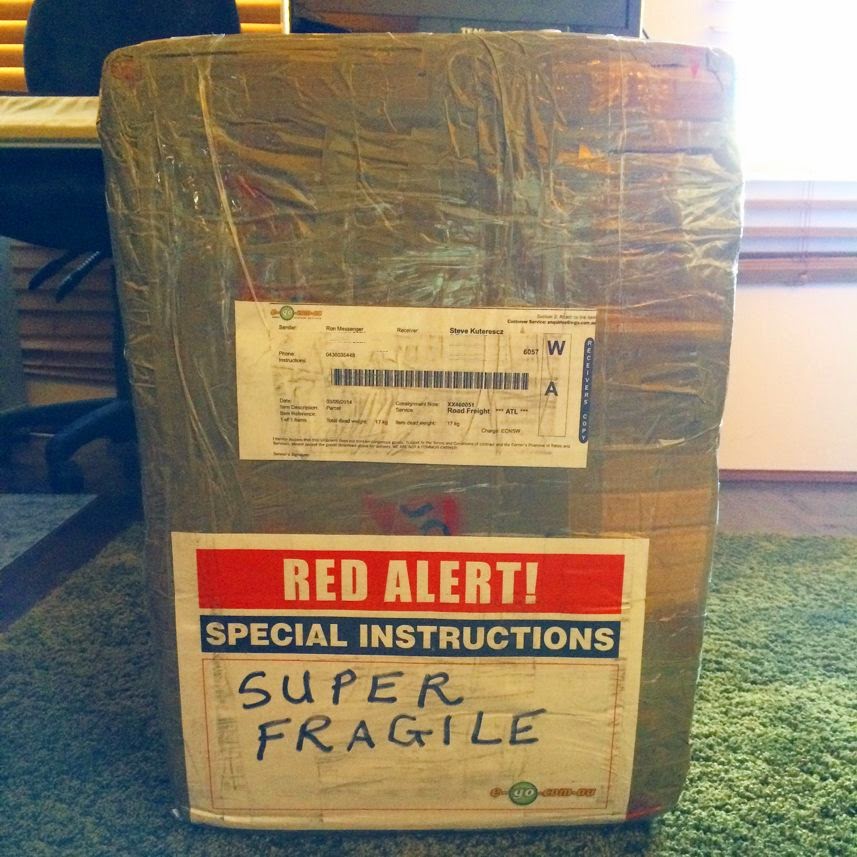 Posted by Robert Messenger at 23:08

How much would a purple Nakajima be?

This really sounds exhausting. Take it easy when you need to! Follow Charlie's good example.

Unimaginable. You are shipping more typewriters than I can fit into my house.