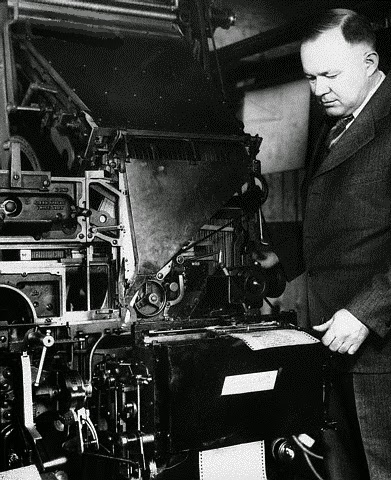 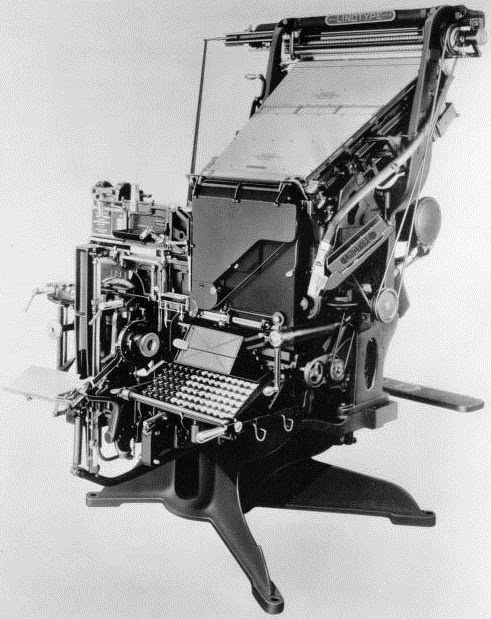 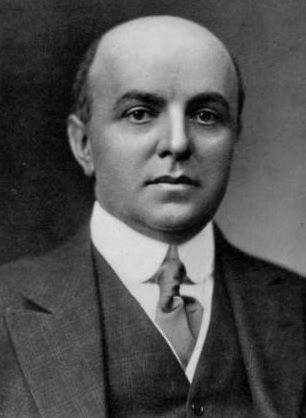 Curtis Boyd Johnson
The Semagraph set type automatically by means of the photo-electric cell, sometimes known as the "electric eye". The keys of the Linotype machine were controlled by a beam of light passing through sheets of typewritten copy, and resting upon the photo-electric cell, which converted the light impulses into electric impulses operating the mechanism. 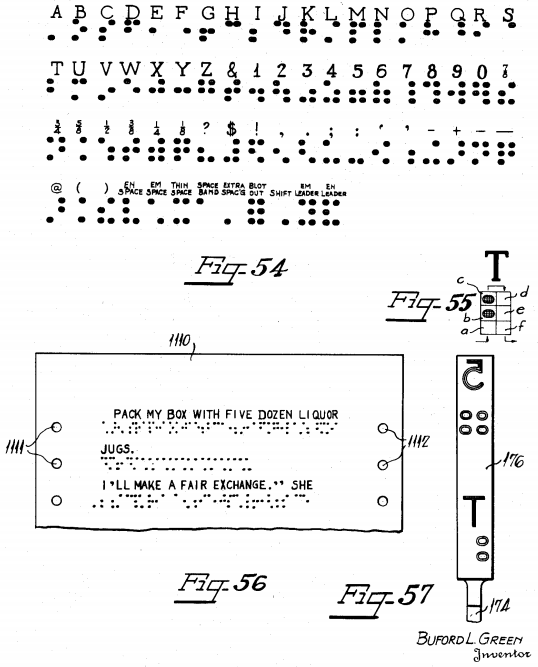 Copy prepared on the special typewriter was fed into the machine, guided by sprocket holes on each side of the sheets. The photo-electric cell unit scanned the copy, reading coded characters which were printed under the typewritten words. The Semagraph deciphered these codes, to operate the Linotype. 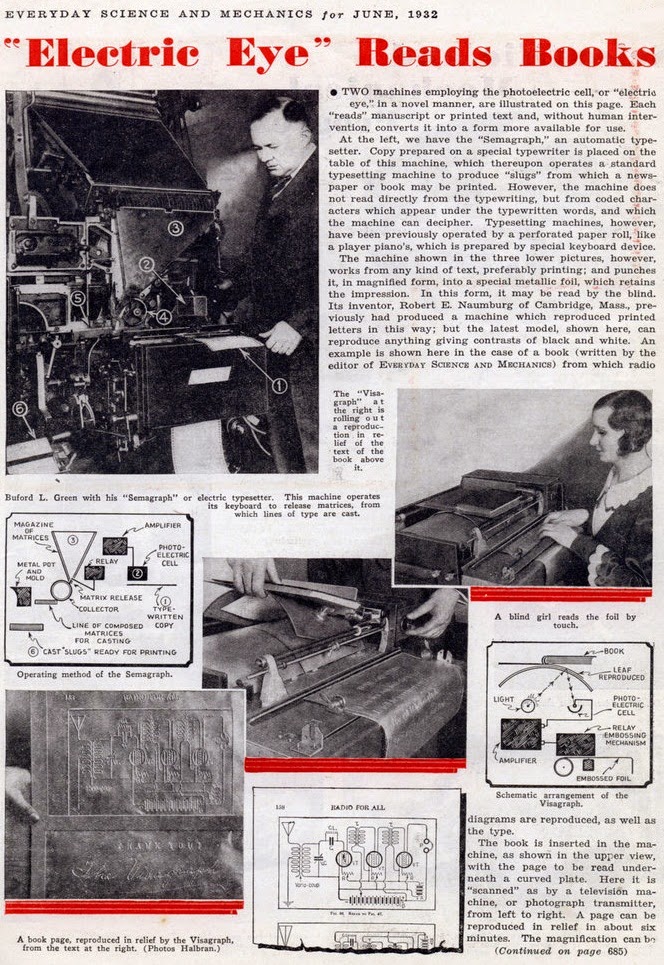 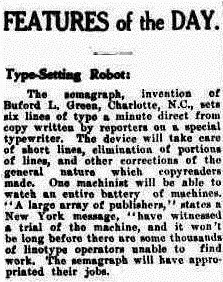 Green and Johnson demonstrated a perfected Semagraph for wire service transmission in the Manhattan offices of the Associated Press in June, 1938. A man sitting in the New York offices of AP operated a Linotype in Charlotte. He punched the keys of a typewriter and feed his copy into a metal transmitting device. The result was type set in column width at the Charlotte Observer, 611 miles away. A full page of typewritten matter was automatically reduced to type in this way. 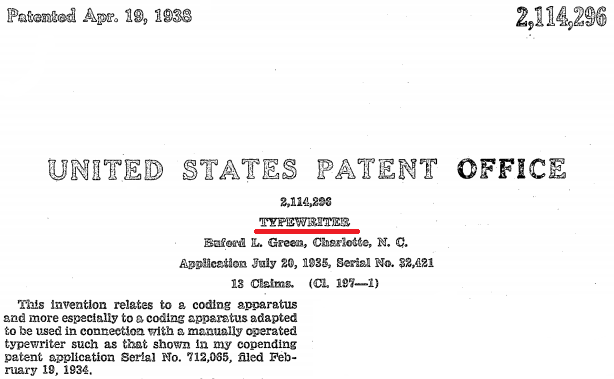 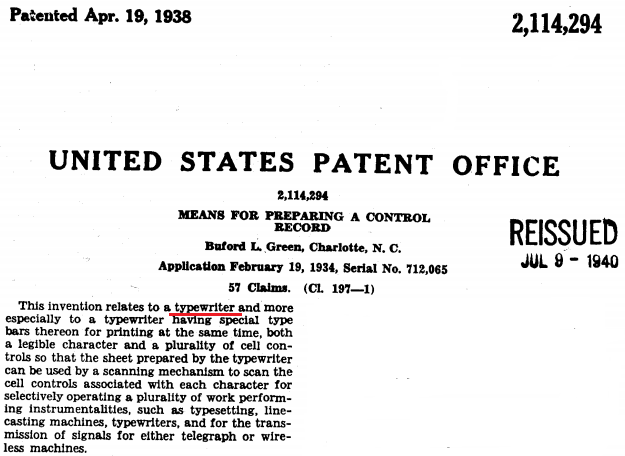 The Semagraph Company had been incorporated in Delaware in February 1933, its entire stock worth $50,000 wholly owned by Johnson, publisher and principal owner of the Observer. Johnson was also sole stockholder of the Curtis B. Johnson Corporation, a personal holding company. Johnson persuaded Green to resign from the Observer and join Johnson's personal company, which funded the Semagraph company. The two companies merged on March 31, 1935, and in 1937 the Charlotte Engraving Company was added.
The last model of the Semagraph was put to a 15-month test in connection with the publication of the Observer, starting in May 1940, and in August, 1941 was proved to be a practical success.

Green, a 26-year member of the International Typographical Union until leaving the Observer, preferred not to think about the effect of his labor-saving machine on employment in his craft. Johnson claimed it would lead to bigger papers, thus even more jobs. The ITU assumed jurisdiction over all workers operating the Semagraph.
The Semagraph led in 1951 to this invention for IBM, which produced coded strips of paper with data which could, among many other things, be fed into a Linotype: 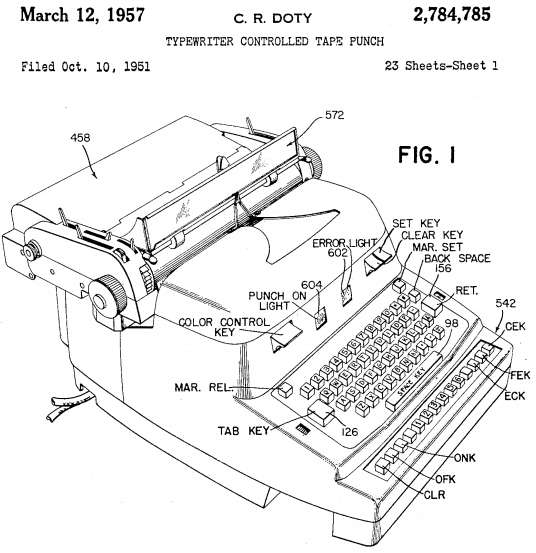 Posted by Robert Messenger at 13:06