The Arabic Typewriter Keyboard and the Syrian Artist 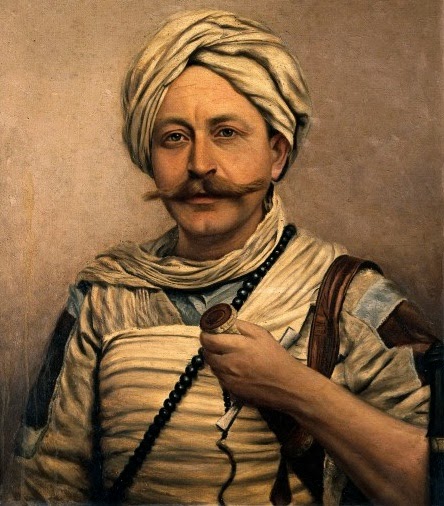 This portrait of Vienna-born Sir Rudolf Carl Freiherr von Slatin ("Slatin Pasha", 1857-1932) was painted in Cairo in Egypt in 1897 by Syrian artist Selim Shibli Haddad (1864-), the man who developed the first successful Arabic typewriter keyboard. Slatin was an Austrian officer, explorer and Egyptian governor in the Turkish-Egyptian Sudan.
Below is Richard Polt's 1964 Arabic language Olympia SM5, the keyboard of which appears to me to be almost identical to the keyboard Haddad designed for a Monarch typewriter in 1914. 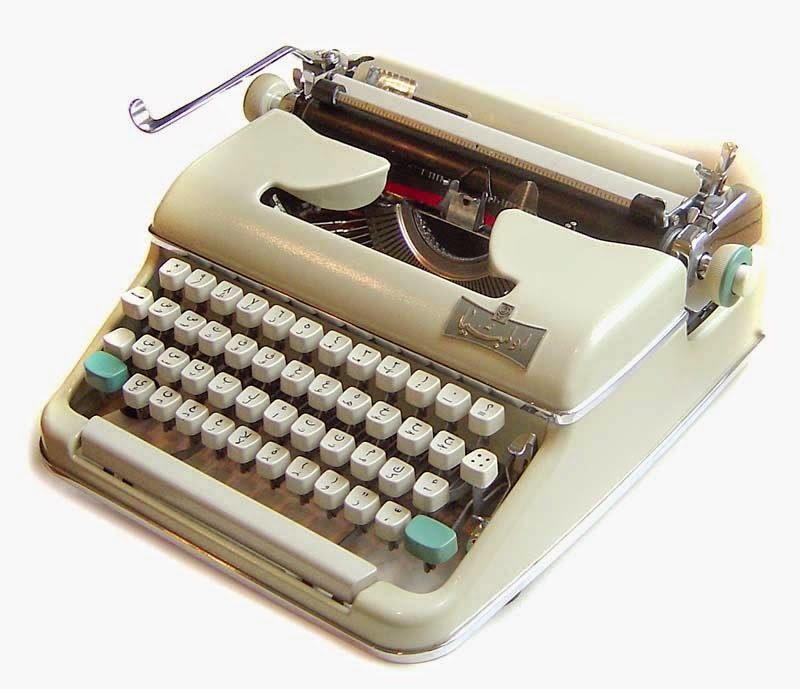 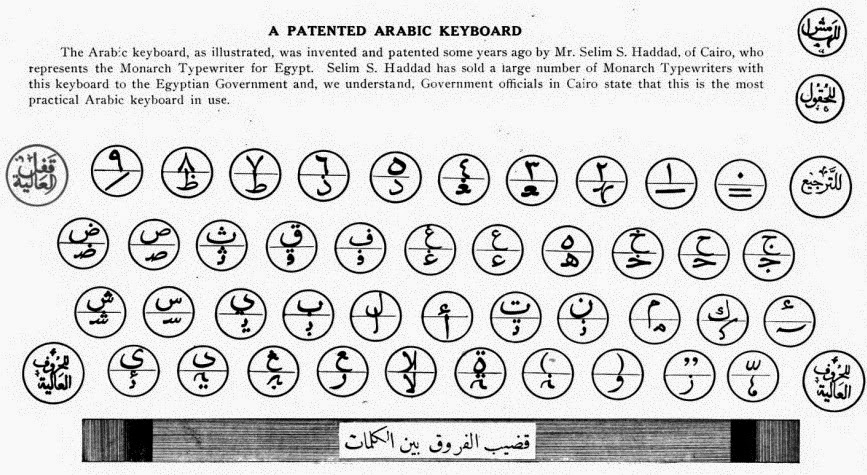 Here is Richard's Erika with what seems to be the same Arabic keyboard: 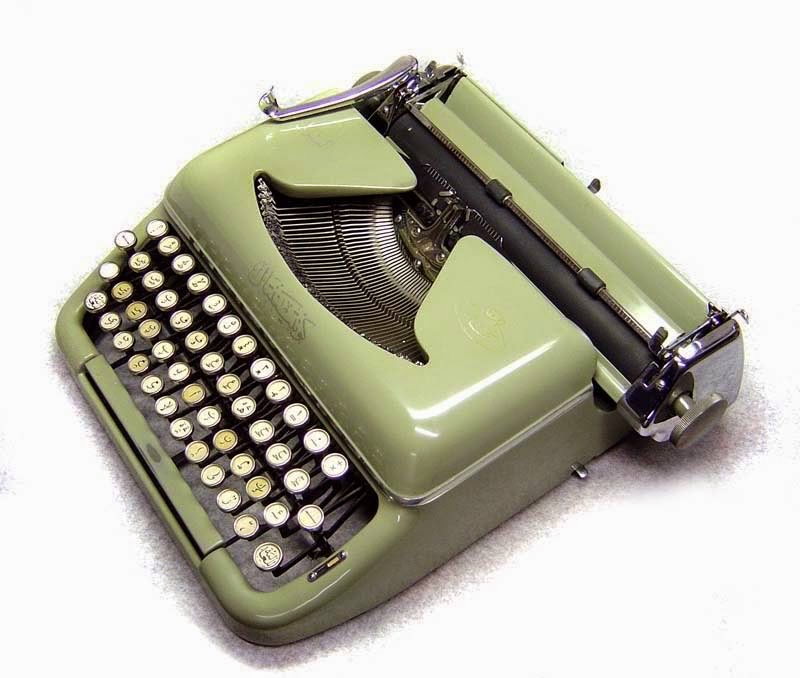 Earlier this year Tom Furrier also had this Imperial Good Companion at the Cambridge Typewriter Shop: 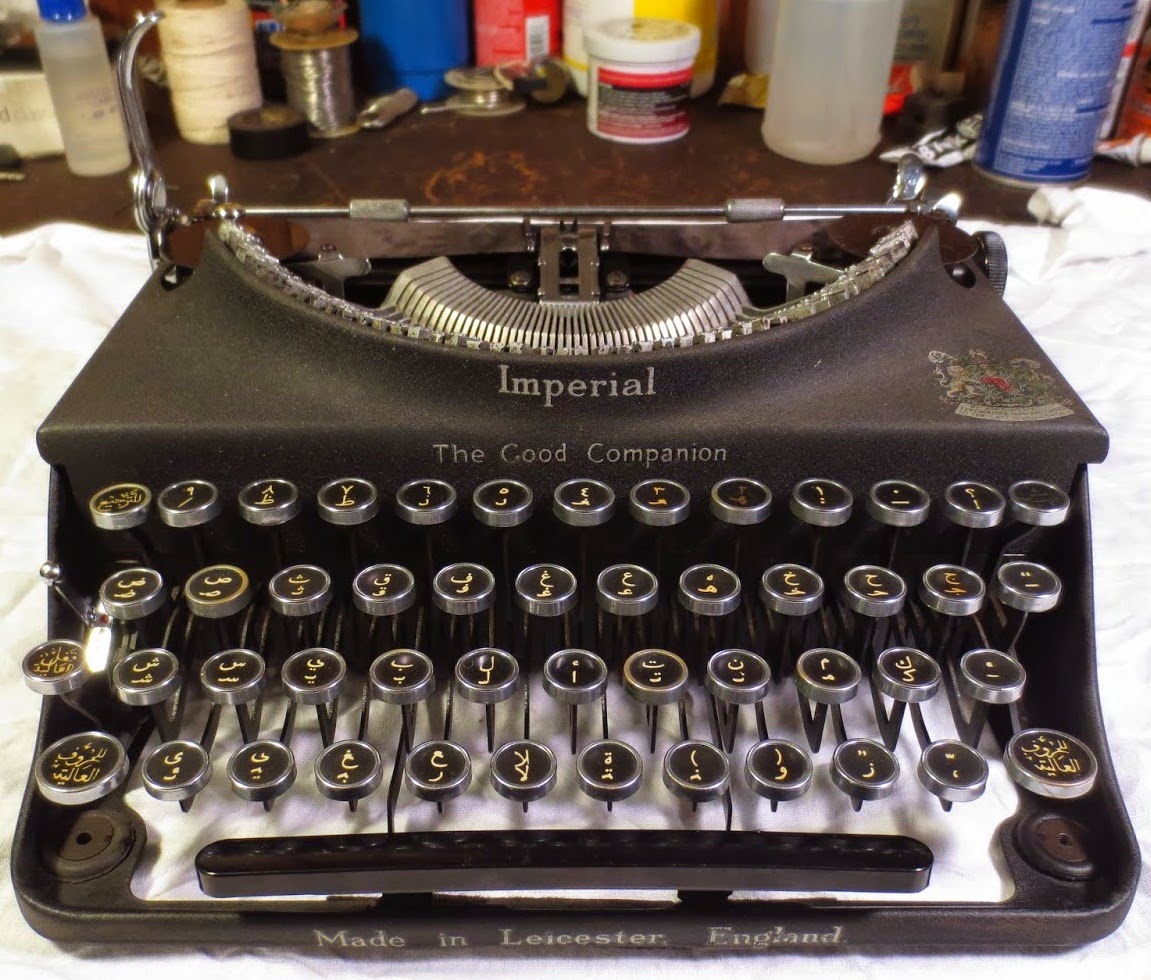 According to Typewriter Topics in January 1915, Haddad had originally designed his keyboard for a New Century typewriter, and later adapted it to a Monarch, for which he had the Cairo agency. Many sources say Haddad worked on this 1914 keyboard in conjunction with Philip Wakid. Wakid was apparently also a typewriter agent in Cairo, but US patents and a 1904 interview with Haddad in The New York Times (see below) indicate Haddad worked alone on this invention.

When Haddad patented his keyboard in the US in 1899, it was apparent that he not only had typebar typewriters in mind, but single type element typewriters as well. He visited the US for the 1893 Chicago World's Fair, the Columbian Exposition, where he would have seen the Blickensderfer. He called Figure 6 (below) a typewheel, though it appears to be more like a Crandall typesleeve.
Blickensderfer did indeed bring out its Oriental with an Arabic typewheel in 1908, but whether it has a Haddad keyboard is not known. I haven't seen one close-up, so it's hard to tell: 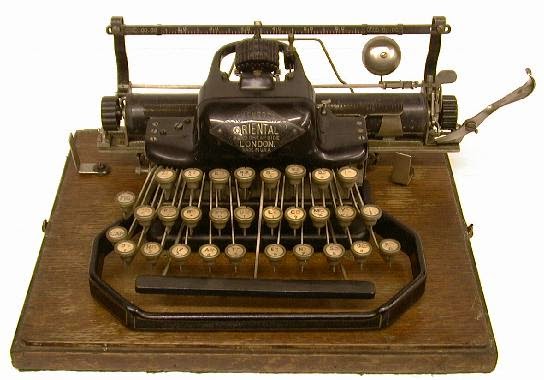 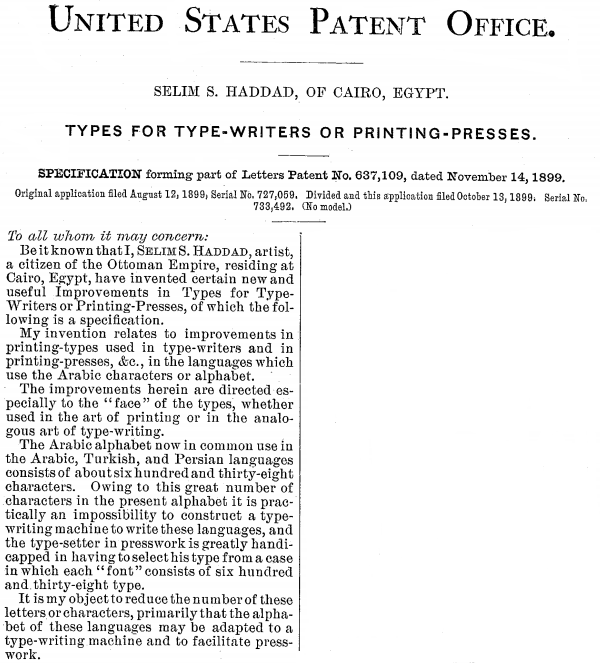 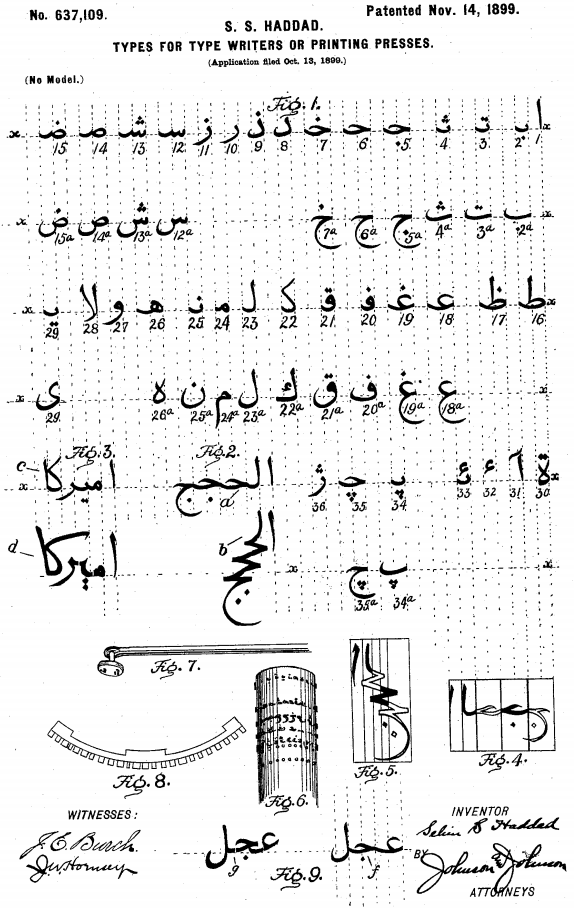 The New York Times interviewed Haddad in August, 1904. At that time, Haddad was visiting the US to promote his Arabic keyboard typewriter. US and Australian newspapers reported "America is to manufacture typewriters for Syria, the machines being fitted with a new alphabet of 53 characters, which was arranged recently by Selim Haddad, a Syrian artist and inventor. The actual Syrian alphabet contains 638 characters."
"Haddad arrived in Washington recently for the purpose of completing arrangements with the Turkish legation in that city for presenting the Sultan of Turkey a sample of what he says is the first typewriter ever invented that writes successfully the Turkish, Arabic and Persian languages. One his typewriters is also to be presented to the Khedive of Egypt by the inventor."
"Haddad has been at work on this machine for five years and had it manufactured in the United Slates. Other typewriters writing these languages have been invented, but Haddad says they were never a success.  The cylinder moves from left to right instead of from right to left, but in most respects the machine looks like the typewriters of America."
"Until five years ago Haddad was a painter at Cairo, but since that time he has devoted nearly all of his energies toward perfecting this new invention, and has had the typewriter patented in this country, Europe and Egypt."

The Times said Haddad was born in "Abbaeih", which is possibly Al-Bahluliyah in Latakia in north-western Syria.

Haddad's 1899 patent has been referenced in numerous US patents since, perhaps most notably for Li Yutang's 1946 Chinese typewriter but also for Seyed Khalil's 1957 design for Royal McBee:

As well as Haddad's design, in 1899 Englishmen Arthur Rhuvon Guest and Ernest Tatham Richmond designed Arabic type for a typewriter (#639379). The following year Baron Paul Tcherkassov, of St Petersburg, Russia, and American Robert Erwin Hill, of Chicago, applied for a patent for Arabic typewriter type (#714621). In 1914, the same year Haddad adapted his keyboard for a Monarch, a Turk, Vassaf Kadry, designed an Arabic language keyboard for Underwood (#1213880).
Posted by Robert Messenger at 13:30

Thanks a lot for this research, which sheds light on my Arabic machines. Now I want to learn the handwriting!

Hi Robert. My great grandfather is Phillipe Waked. It's very interesting to see his name mentioned in your article. Perhaps I can provide some more information about him if you are interested. Cheers from Auckland!

To be very precise, as I see that readers are interested: Selim Haddad was born in عبيه‎ (Aabey or Abey) a village located in Aley District (Mount Lebanon) on the side of the Chouf overlooking Damour and Beirut.

Thank you very much for your Arabic keyboard subject, really it's rich in information.